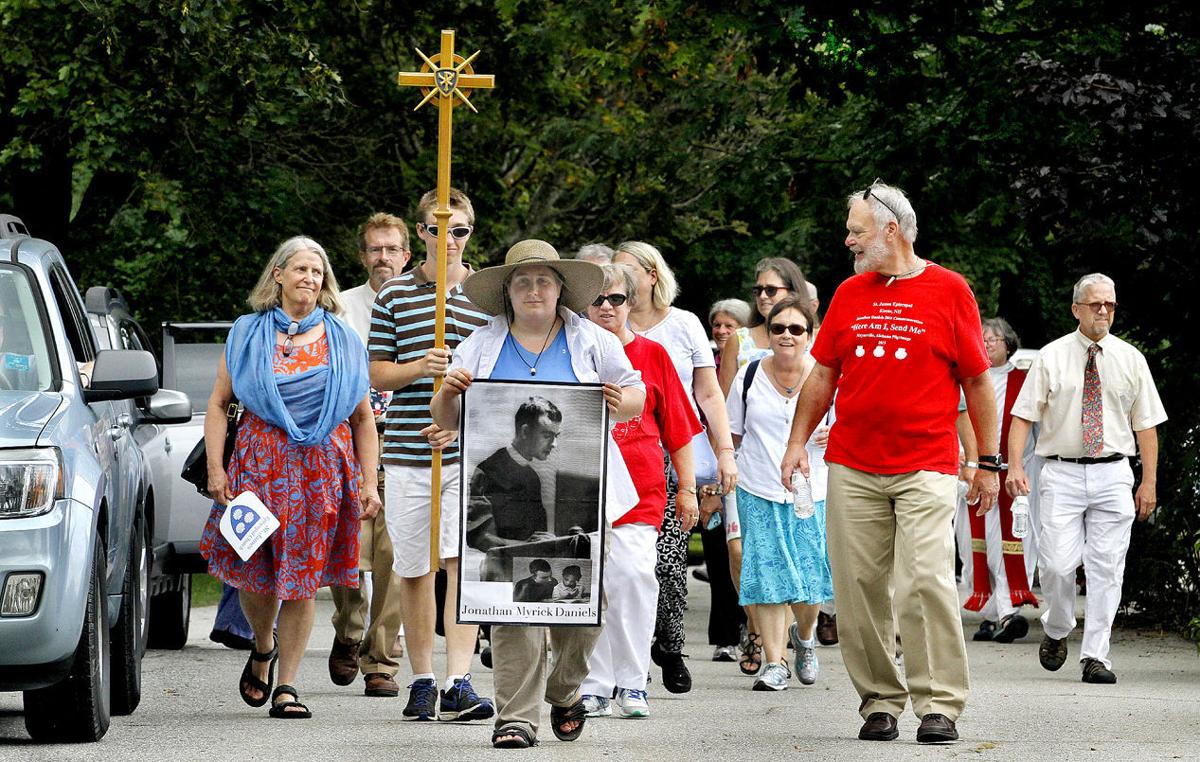 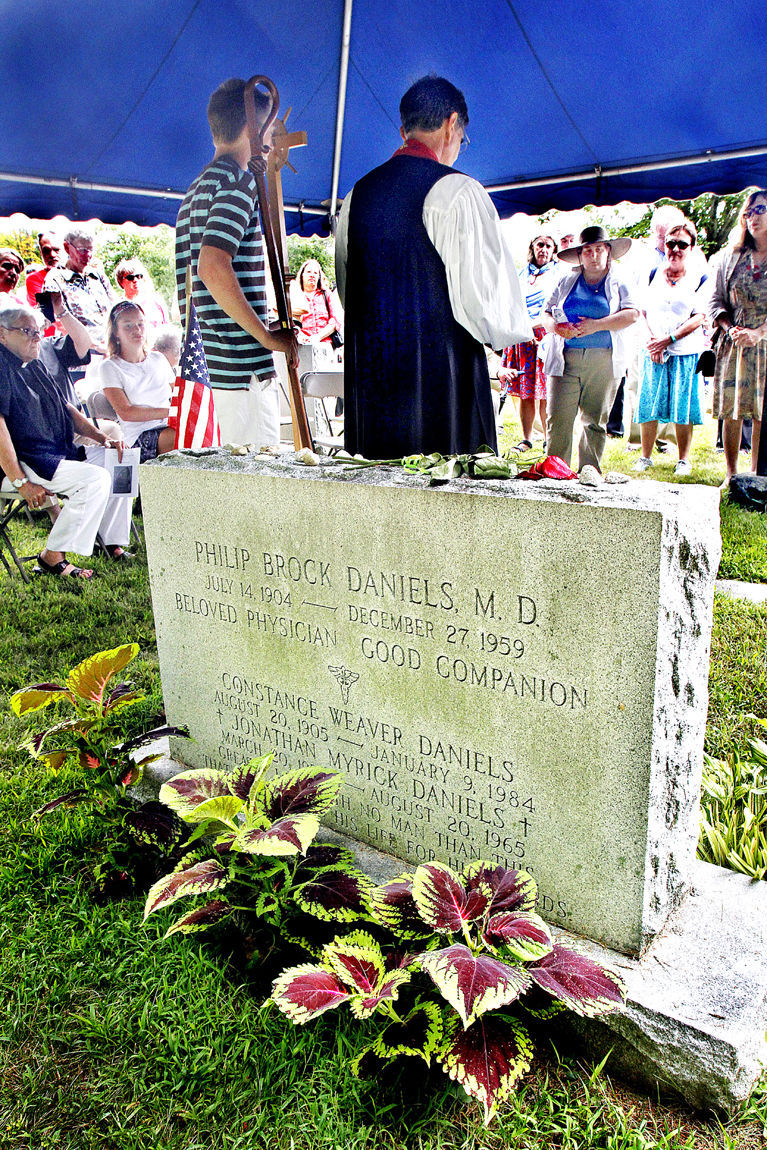 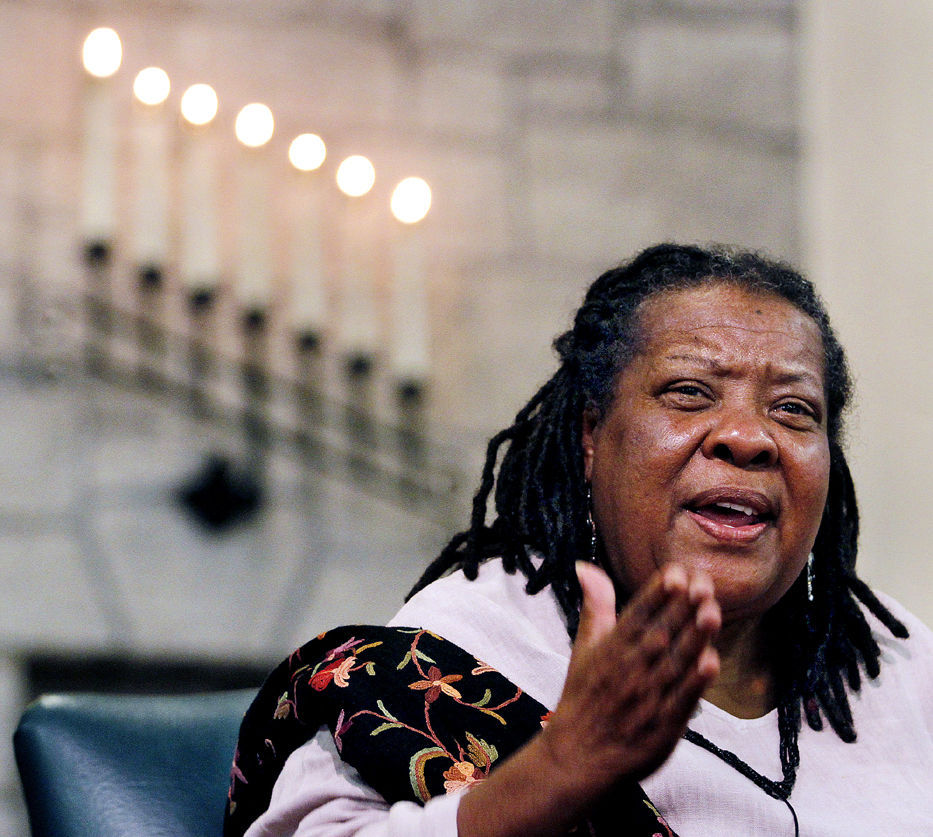 Ruby Sales gives the sermon during the St. James Episcopal Church’s memorial service, “The Feast of Jonathan Myrick Daniels,” on Sunday. Sales was a teenager when her life was saved by Daniels, a young seminarian from Keene, who took a shotgun blast meant for Sales in Hayneville, Ala. Sales is 67 now and a nationally recognized civil rights activist, author and public speaker.

Ruby Sales gives the sermon during the St. James Episcopal Church’s memorial service, “The Feast of Jonathan Myrick Daniels,” on Sunday. Sales was a teenager when her life was saved by Daniels, a young seminarian from Keene, who took a shotgun blast meant for Sales in Hayneville, Ala. Sales is 67 now and a nationally recognized civil rights activist, author and public speaker.

When Henry A.L. Parkhurst visited the grave of his old friend Jonathan Daniels Sunday in Keene, he brought along mementos he’s been holding on to for the past 50 years.

In an old tin can depicting Queen Elizabeth II, Parkhurst had a photograph of Daniels that Daniels’ mother, Constance, had given to him at the funeral half a century ago. He had the program from the day and a carnation that had been on the coffin.

The flower was dried out now, a little faded, but, as Parkhurst pointed out, you could still tell it was red.

Parkhurst, also a state representative from Winchester, was one of more than 60 people who attended a ceremony at Daniels’ grave at Monadnock View Cemetery Sunday afternoon. The service was the last in a weekend of events to mark the 50th anniversary of the Keene resident and civil rights activist’s death in Hayneville, Ala.

Daniels, a 26-year-old seminarian, was killed Aug. 20, 1965, after taking a shotgun blast to the stomach to save the life of Ruby Sales. She was a 17-year-old girl who had been taking part in the civil rights march in Alabama at the time.

Sales, along with Richard Morrisroe, Jimmy Rogers, Rev. Judith Upham and Gloria House — all of whom worked with Daniels in Hayneville — traveled to Keene to memorialize a man the Episcopal Church recognizes as a martyr and saint.

The weekend — part of a year-long commemoration — was filled with events celebrating Daniels’ life and providing insight into his work.

Sales and her fellow special guests participated in two panel discussions Saturday. The first, in the basement of St. James Church Episcopal Church on West Street in Keene, was moderated by Rich Wallace and Sandra Neil Wallace. The two city residents are writing a biography about Daniels set to come out in 2016.

Later that night, the documentary about Daniels produced by Keene State emeriti professors Larry Benaquist and Bill Sullivan, “Here Am I, Send Me: The Journey of Jonathan Daniels,” screened at The Colonial Theatre, followed by another panel discussion with the five guests.

On Sunday, Sales gave a special sermon at St. James, the church that Daniels attended when he lived in Keene. After the service, a group marched to Daniels’ resting place for the graveside ceremony.

“It’s been very humbling to see how an individual who grew up in Keene could have such an impact,” said Christine H. Weeks, one of the organizers of the events.

For Thomas Driscoll, a Keene resident who was four years ahead of Daniels in school, the story was one that caused him to think seriously about aspects of his own life.

“Jonathan was just one of us. Would I have done the same thing? Maybe. I just didn’t get the calling.”

For others, Daniels’ story has helped inspire careers.

Lynn A. Bergman, who attended events on both days, said all the discussions had been very moving. Bergman is a clinical social worker who has her own private practice in town.

While not particularly religious as Daniels was, she said he inspired her to do her own type of peace work, though in a more secular way.

Events like the ones this weekend are important for telling Daniels’ full story, according to Ruby Sales. Because when it comes to remembering Daniels, she said people must not forget all that defined the man who saved her life: his decision-making, his personality, his humanness.

“I think it’s really important to get the fullness of Jon,” she said.

“If you don’t really interrogate what his choices meant, you miss the whole narrative of his life.”

Many who knew Daniels hope others will continue to follow in his footsteps.

“We need more,” Parkhurst said of people like Daniels, as he packed the items back into the tin.

“We need more of the honest gentleness of Jon.”