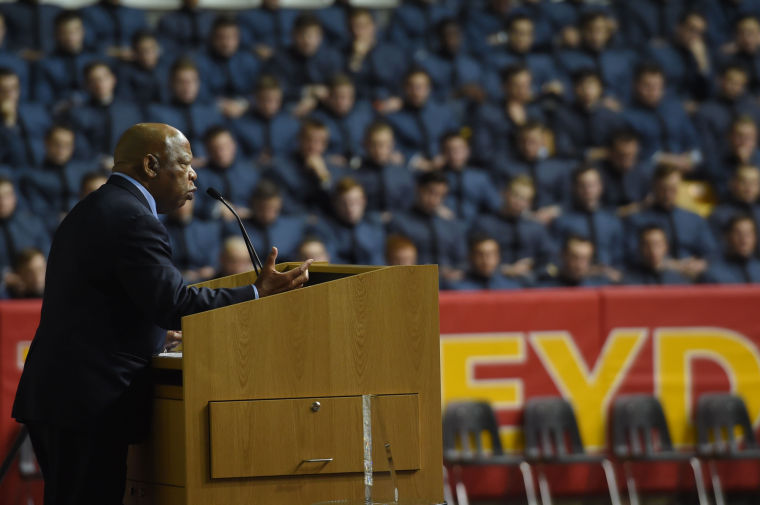 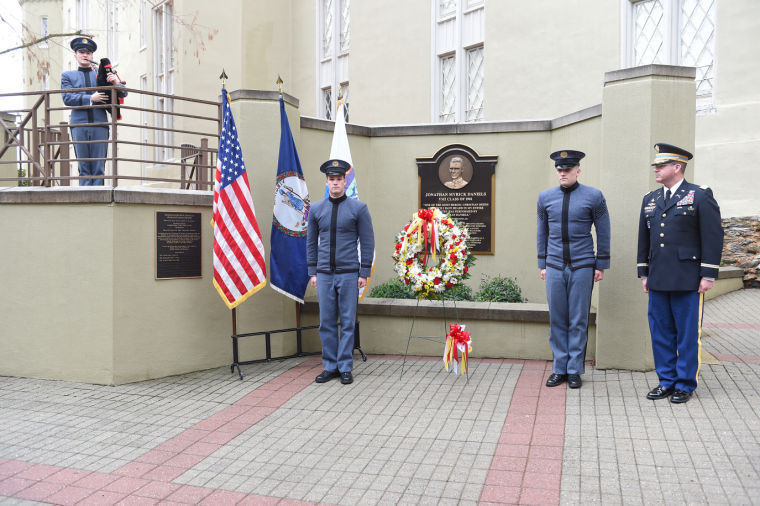 Cadets at Virginia Military Institute participate in the annual wreath laying at the Daniels courtyard.

Cadets at Virginia Military Institute participate in the annual wreath laying at the Daniels courtyard.

Daniels, valedictorian of the VMI class of 1961 and an Episcopal seminarian from Keene, responded to Martin Luther King’s call for clergy to assist with civil rights and voter registration in the South. In 1965, Daniels was killed by a shotgun blast in Hayneville, Ala., as he pushed young Ruby Sales out of the way of the blast. The first Jonathan Daniels Award was presented in 2001 to former President Jimmy Carter. Successive awards were presented to Andrew Young, in 2006, and VMI alumnus Paul V. Hebert, in recognition of his international humanitarian work, in 2011.

Four days after participating in the anniversary remembrance of “Bloody Sunday” on the Edmund Pattus Bridge in Selma, Ala., Lewis said he was “honored to be here on this day, this week; thank each and every one of you.”

Lewis described his youth in rural Alabama and how he met Martin Luther King Jr. and how he got involved in the civil rights movement.

“Jonathan Daniels, a beautiful spirit, a beautiful soul, was a boy from Virginia Military Institute,” said Lewis. “He heard the trumpet, heard the sound, heard the call from Martin Luther King. He got in trouble, good trouble, necessary trouble.”

Lewis told about how, in 1965, “600 of us simple, ordinary citizens” decided to march from Selma to Montgomery “to dramatize that people from Alabama wanted the right to vote.”

At the highest point on the Edmund Pettus Bridge in Selma, he recalled, “I looked down and saw a sea of blue state troopers and sheriff’s deputies on horseback.” A trooper gave the marchers three minutes to disperse and return to their homes or church, and a man with King’s group asked for a moment to pray. However, the troopers soon attacked, and Lewis was hit in the head by a nightstick. “I thought I was going to die,” he said. He was taken back to the church, where he sat up and said, “I don’t understand why President Johnson could send troops to Vietnam and not send troops to protect us.”

Eight days later LBJ gave a speech calling for equal voting rights, and Lewis had sat next to King during the speech and saw the tears coursing down his face and heard him predict, correctly, that the Voting Rights Act would be passed.

“We must never forget the contribution these martyrs made to make this country better,” said Lewis of Daniels and others who died in that era. “The (segregationist) signs are gone and they will not return; the only places our grandchildren will see those signs will be in a book, in a museum or in a video. ... For someone who grew up preaching to chickens, I feel blessed to be able to say to you: never give up, never give in, never give out. Lay down the burden of hate, separation, division; we all live in the same house, the American house, the world house. ... We need to look out for each other and remember the life and contribution of Jonathan Daniels.”

Mr. President, as we commemorate the 50th anniversary of the Selma to Montgomery Voting Righ…