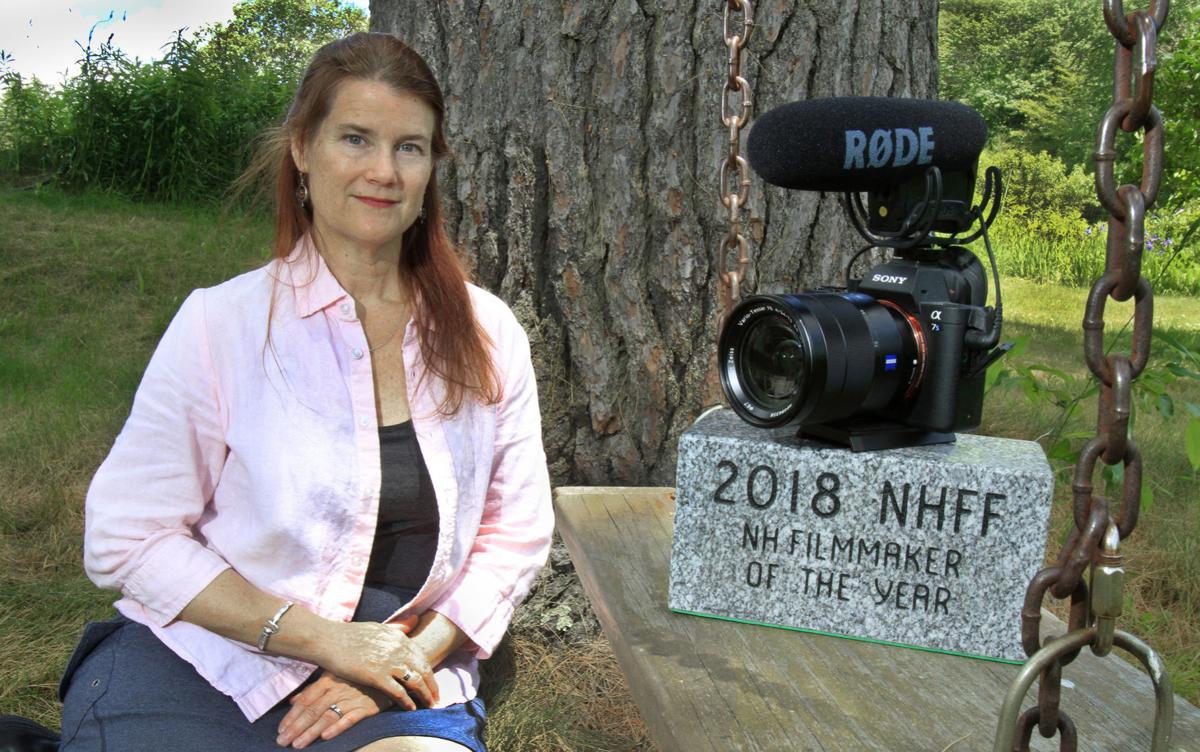 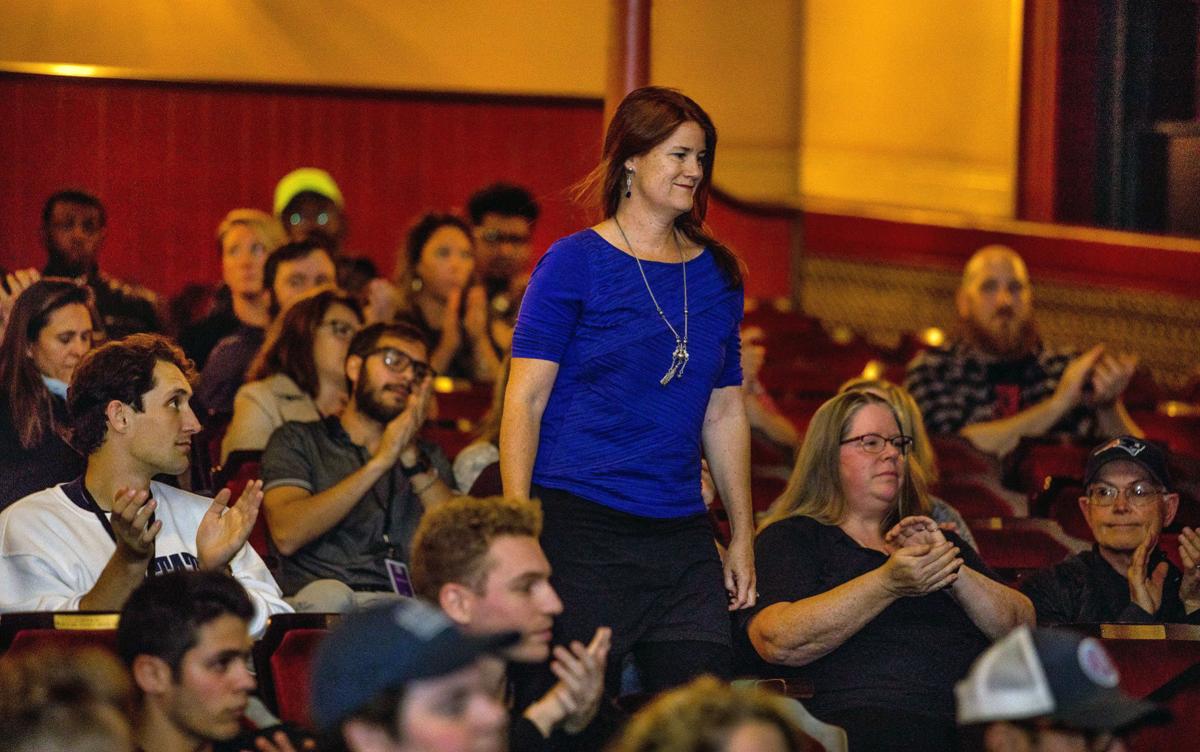 Amy Jenkins of Peterborough walks through the applause as she is named the 2018 filmmaker of the year by the N.H. Film Festival.

Amy Jenkins of Peterborough walks through the applause as she is named the 2018 filmmaker of the year by the N.H. Film Festival.

An unmowed field shields the house from passersby, a dirt road forking midway up the incline, a friendly dog’s snout in your lap, catnapping. The air thick with pollen, the pace is placid on this late-afternoon summer day on the outskirts of The MacDowell Colony in Peterborough, where husband and wife John Sieswerda and Amy Jenkins live with their two children.

He is the longtime maintenance foreman at the famed artists’ colony, and she’s an acclaimed artist and filmmaker, a 2019 Ruth and James Ewing Arts Award winner in interdisciplinary arts. They met when she was a fellow at MacDowell in the late 1990s, a New York City resident drawn to the country hideaway that hosts some of the most renowned artists in the world. She still loves the city, needs the city, travels often to the city — one of the art meccas of the world — yet this has been home for more than a decade.

“I never thought I’d live in New Hampshire,” Jenkins says with a chuckle, “but here I am. Now I love it. It wasn’t exactly my game plan, though.”

Jenkins, 53, is a multi-award-winning artist whose installations, films and photography have been exhibited, screened and collected internationally. She says her works focus on themes such as familial relationships, desire and gender identity. They’ve been shown at museums around the world including the Museum of Modern Art in New York, The National Gallery of Art in Washington, D.C., the Haifa Museum in Israel; the Akron Art Museum in Ohio and Palm Beach ICA in Florida.

“Emotionally demanding while also formally minimal and conceptually rigorous, my artistic style is recognizable across the genres in which I work,” she writes. It is exhibition-based artwork, not available for purchase to hang on your living room wall.

In recent years, Jenkins has immersed herself in documentary filmmaking and produced the very personal “Instructions on Parting.” It chronicles the ordeals faced by her mother, brother and sister, who were all diagnosed with terminal cancer within a year of each other, while also following the birth of her first child. It’s not linear, in the traditional A to B sense, but interspersed with nature vignettes, family snapshots, poignant voicemails, even seasonal timeline footage of that field in front of her house with the dirt road that forks.

It is breathtaking and heartbreaking.

“I wanted to highlight the personal experience of losing a family member,” she says. “And I think it works really well for that.”

“Instructions on Parting” won best feature documentary at the Athens International Film and Video Festival in Ohio, and Jenkins was named 2018 Filmmaker of the Year by the N.H. Film Festival. It made its debut last year at Doc Fortnight, the Museum of Modern Art’s nonfiction film festival in New York City. It has since been screened at many festivals, here and abroad, including this year’s Monadnock International Film Festival in Keene.

Jenkins comes from the Midwest, Springfield, Ill., where she grew up with her parents, Ellen and Robert, and older siblings, Linda and Craig. Stacked randomly in one corner of her house, looking out of place on this warm, summer day, are several pairs of timeworn skis. They’re portals into the past, as the family left Illinois for Park City, Utah, because “skiing was the deep, family passion,” she says.

And so was art.

“My mother, I would say, taught us all an appreciation for art. I was always surrounded by art growing up,” Jenkins says.

Her mother and brother were painters, in different mediums, and her grandfather Paul Strohm practiced photography. (Her father was an eye surgeon, and her sister a teacher and speech therapist.) Her grandfather was hired by Kodak in the Depression era, and when Jenkins was 7, he gave her a Polaroid camera “and a ton of film. So, it was instant love,” she says.

She dabbled in conceptual art as a kid, taking self-portraits with her friends. When she was 10, her father converted an attic bathroom into her first darkroom. She pored through books about photography, had a subscription to Aperture Magazine. “I was kind of the self-appointed family documentarian from the time I was very young,” she says. She contemplated a career in photojournalism, had a summer internship at the local paper. Her basic trajectory was always lens-based, she says.

She earned her undergraduate degree at Colorado College, then a master’s degree at the School of Visual Arts in New York City. Living in Manhattan and Brooklyn over the next 20 years, she immersed herself in art, learning, creating, teaching. She taught at the University of New York and Rhode Island School of Design (RISD) in the city, and she did some independent lecturing. She scratches that teaching itch today as a mentor at the Vermont College of Fine Arts in Montpelier.

“My formative works included sculptural video installations that focus on familial relationships, the body and the boundary between reality and fiction,” she writes. “As I have matured, my artistic vision has evolved along with the scope of my projects.”

Jenkins started exhibiting right out of college and had her own gallery in New York. She traveled extensively, her rigorous exhibition schedule taking her around the country. She was first accepted into The MacDowell Colony as a Fellow in 1998 and returned the following year. It’s where she fell in love with Sieswerda, who was working at MacDowell, and they married in 2001.

Life changes came swiftly and tragically. She was three months pregnant with her first child in 2002 when her sister was diagnosed with ovarian cancer, and a short time later her mother learned her breast cancer had metastasized. Her brother was diagnosed with a rare form of terminal cancer shortly after they died.

She chronicled their final journeys through the lens of a Sony PC1, collecting memories, she says. Concurrently, she filmed nature scenes in her own yard as a coping mechanism. “A practice of visual meditation,” is how she describes it in an interview with Bomb magazine, a quarterly publication for artists and writers.

She stored the unorganized footage — and the camera — in boxes on a shelf in her studio after her brother died, leaving it there for six years. Only then was she ready to explore it intently, time being an ally.

The process began at Yaddo, an artists’ retreat in Saratoga Springs, N.Y., where Jenkins spent two weeks reconnecting with her family members on those tapes. She painstakingly sifted through hours and hours of footage, day and night, tears and laughter mingling. The more she watched, the more her connection with them became cemented, stirring her artistic creativity.

“It becomes so deeply familiar, choosing what parts to put next to what parts, that I had no time deadline until I had it absolutely right,” she says.

“Instructions on Parting” unhurriedly weaves scenes of her family with nature, subtle and intimate. Scenes include time-lapse recordings of a robin’s nest and the taking down of a stately tree; a hand on a pregnant belly and between the shoulder blades of a late-stage cancer victim. The film is lined with metaphors, inevitable and intentional, and Jenkins says it’s intended to be therapeutic for people who have dealt with loss.

She considers herself a novice filmmaker. Whereas much of her career was spent solo as a visual artist, film requires collaboration. “Had to get out of that solo artist mode,” she says.

Jenkins found a producer, editor, composer, sound designer and others who contributed to the film. The deeper she got into it, the more she enjoyed working with a team.

“I’ve totally fallen in love with filmmaking,” she says. “It’s totally satisfying to hit my mid-century mark and be working in a new medium.”

She has several projects in mind for the future, including a full-length documentary involving gender identity and the youth generation, plus she has potential subjects in mind for short films. And she would like to further market “Instructions on Parting” so it’s available to a wider audience, but finding a distributor is a work in progress.

She’s adept at navigating New York’s labyrinth of grant applications — New Hampshire is a funding desert for artists by comparison — but it is time-consuming and she’s raising 16-year-old and 11-year-old boys with Sieswerda. But anything seems possible on a warm summer afternoon in Peterborough, when the only sound is the wind rustling out pollen from the grass.

Small wonder Jenkins smiles and says, “I just need three more of me.”