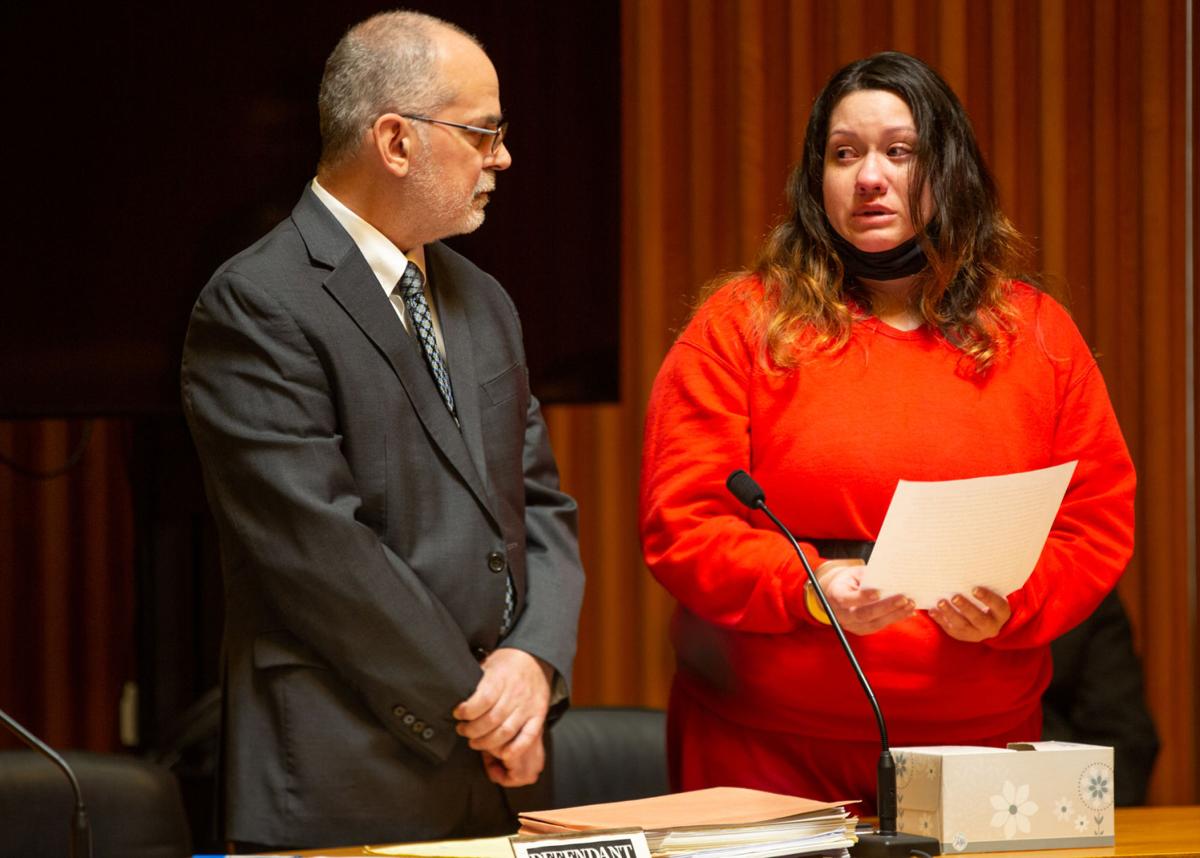 Britany Barron of Jaffrey delivers a statement to the family of Jonathan Amerault during her sentencing hearing on Wednesday at Grafton County Superior Court in North Haverhill. Her attorney, Richard Guerriero of Keene, is at left. 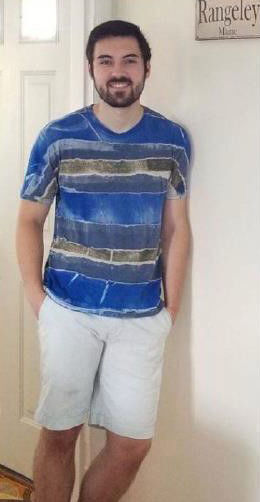 Britany Barron of Jaffrey delivers a statement to the family of Jonathan Amerault during her sentencing hearing on Wednesday at Grafton County Superior Court in North Haverhill. Her attorney, Richard Guerriero of Keene, is at left.

Editor’s note: This article contains descriptions of violence. They are included because of their relevance to the case.

NORTH HAVERHILL — Britany Barron struggled to speak through her tears on Wednesday, as she addressed a courtroom moments before being sentenced for her actions after Keene resident Jonathan Amerault was killed last year.

Dressed in a red prison uniform and reading from a piece of paper she held in her shackled hands, Barron, 32, described the “shame and disgust” she feels for her involvement in efforts to conceal Amerault’s death from authorities after prosecutors say her husband, Armando Barron, shot and killed him in September 2020. In her statement, Barron, of Jaffrey, didn’t try to defend her actions; doing so, she said, would be an insult to Amerault’s family.

“I’m sorry for every single thing I’ve done to Jonathan,” she said tearfully, facing Amerault’s parents. “I understand that my words are meaningless and do nothing to bring back your incredible son. The only way that I can think of to try to show you that I’m really, sincerely sorry is to accept full responsibility for my actions.”

Last month, Britany Barron accepted a plea agreement in which she pleaded guilty to three counts of falsifying evidence in exchange for a sentence of 3½ to seven years in state prison, with two years suspended on condition of continued good behavior. On Wednesday, Grafton County Superior Court Judge Peter Bornstein upheld that agreement.

Amerault, 25, was reported missing on Sept. 21, 2020, after not showing up for work that day. His body was found the following day in an unincorporated area of Coos County.

According to an affidavit written by N.H. State Police Sgt. Stephen Sloper, Barron told police last year that her husband used her cellphone to lure Amerault to Annett State Park in Rindge after discovering text messages between the two. Barron had told her husband that she wanted a divorce, and she and Amerault were in the early stages of forming a romantic relationship, Senior Assistant Attorney General Ben Agati said at her plea hearing last month.

Once at the park during the overnight hours between Sept. 19 and 20, 2020, Barron told police, her husband ordered her to shoot Amerault, but after she refused, he shot and killed Amerault himself, according to the affidavit. She also said that just prior to this, Armando Barron had severely assaulted her, leaving her with a pair of black eyes, a broken nose and other injuries.

Barron and her husband then took Amerault’s vehicle and their own north to Coos County, where they made camp and attempted to dispose of the evidence, Sloper said she told police. According to the affidavit, Barron said she followed orders from her husband — with whom she has three young children — to remove Amerault’s head and to conceal his body and his vehicle.

“As a mother, I know in my heart that justice will never be served,” Barron said Wednesday. “No amount of prison time or life sentences will take the pain away or undo the past.”

Barron’s attorney, Richard Guerriero, explained that while her sentence was technically 3½ to seven years, the two suspended years mean it effectively becomes 1½ to five years. With a bit more than a year of time served, Barron will be eligible for parole as early as this spring, according to Guerriero, as long as she follows the terms of her plea deal, which include avoiding further legal trouble.

“She should parole after one and a half years,” Guerriero said. “And she has credit for the time served, so she should be eligible for parole in March.”

Barron has been incarcerated since late September 2020, after Amerault’s body was discovered by N.H. Fish and Game officers near the campsite she said she and Armando had set up. Her husband, who Barron said had returned to Jaffrey without her, was arrested shortly thereafter on charges related to both Amerault’s death and his wife’s alleged assault.

Both Agati and Guerriero agreed that the terms of Barron’s plea agreement meet the court’s goals of balancing punishment, deterrence and rehabilitation. Agati said several factors were taken into consideration, including Barron’s allegedly abusive marriage, her lack of a criminal record and her ongoing efforts to cooperate with law enforcement.

“Her actions and motivations truly were unique and require a unique view ... to come to an appropriate sentence,” Agati said.

However, not everyone thought Barron’s sentence sufficient.

In her victim-impact statement, Amerault’s mother, Justine Amerault, spoke of her son’s many accomplishments, ranging from athletics to academics, and of his good nature, noting that he was both a blood and an organ donor who cared deeply about social issues. She said his death was a devastating loss and called Barron’s actions “abhorrent, savage, evil beyond imagination, egregiously selfish, callous and self-serving.”

She described the pain her family endured between the time they realized he was missing and when authorities confirmed they’d found his body. She reflected on the milestones her son will never get to experience and the potential he will never get to realize.

“Jonathan had the world in the palm of his hand,” she said. “She snatched it from him, from his father, from me and from the rest of Jonathan’s extended family.”