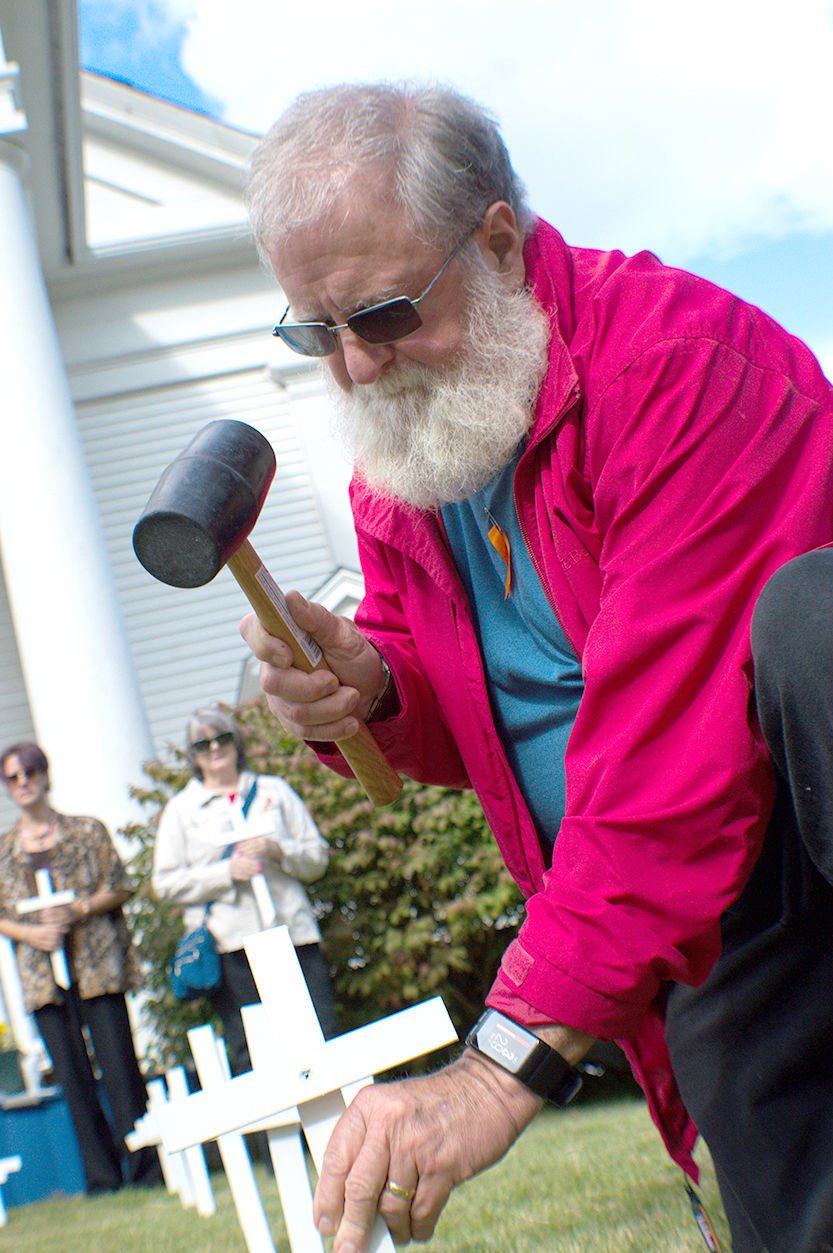 John Stone of Jaffrey hammers a wooden cross into the lawn of United Church of Jaffrey Sunday afternoon during the congregation’s memorial service to honor victims of mass shootings. 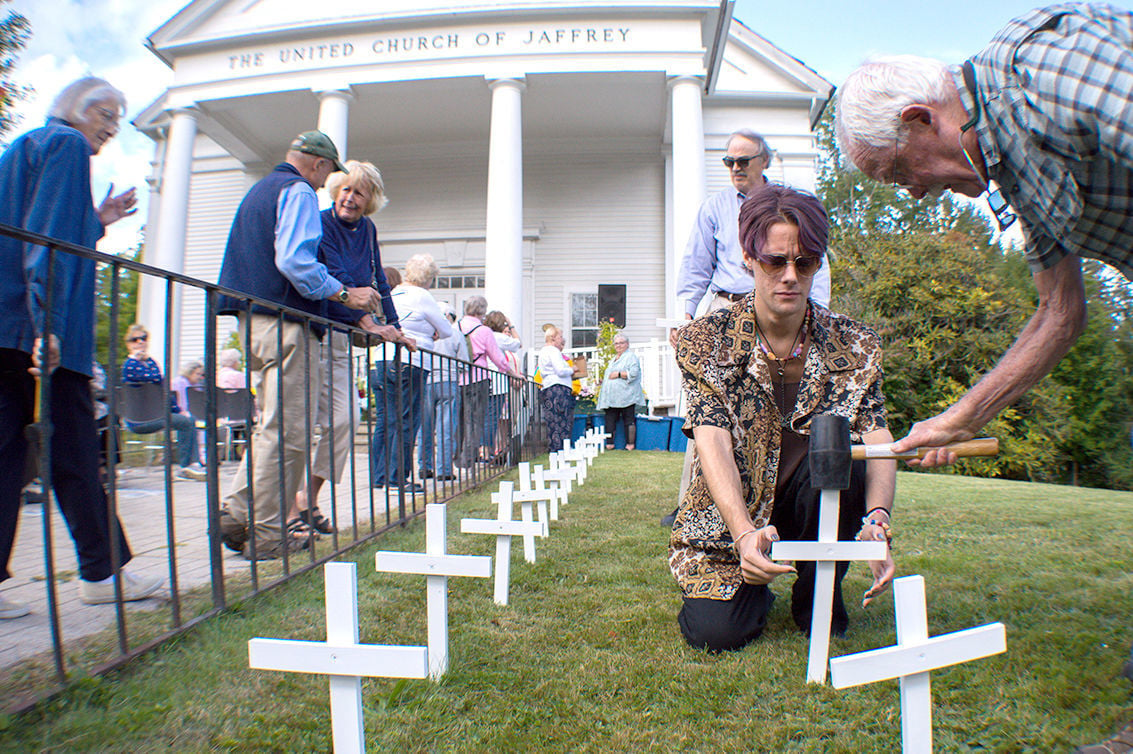 Chris Ordway participates in United Church of Jaffrey’s memorial service Sunday to pay tribute to victims of mass shootings. The Jaffrey resident joined the congregation that day and called the afternoon a personal “spiritual experience.”

John Stone of Jaffrey hammers a wooden cross into the lawn of United Church of Jaffrey Sunday afternoon during the congregation’s memorial service to honor victims of mass shootings.

Chris Ordway participates in United Church of Jaffrey’s memorial service Sunday to pay tribute to victims of mass shootings. The Jaffrey resident joined the congregation that day and called the afternoon a personal “spiritual experience.”

JAFFREY — Over the course of an hour and a half Sunday afternoon, a grassy hill outside United Church of Jaffrey filled with rows of small, white crosses, each representing someone who died this year in a mass shooting in the U.S.

Rev. Mark Koyama of United Church of Jaffrey opened the memorial service with a few remarks.

“Today we gather to acknowledge death, to honor the dead — not one death, as we usually do in this church, but 286 deaths,” he said.

Data vary on how many people have died this year in mass shootings, depending on definitions of what constitutes a “mass” shooting. The Gun Violence Archive lists 320 mass-shooting deaths so far this year.

Leaning on the power of prayer, Koyama said Sunday’s event will “illustrate to everyone who will witness this act that we are not just a bunch of mumbling old people. For us, prayer is action.”

He later said the intent is to make the matter of mass gun violence visible in a symbolic way that’s difficult to ignore.

“This is a moral issue that is significant enough that I think it needs to be kept in front of us until something is done,” he said.

There are differing opinions on gun control within the congregation, Koyama said, so the church is not making demands or calling for any specific political action. The goal is to remind people to do something rather than nothing, he added.

“This is harnessing the energy of the church. The people of the church were filled with a sense of urgency and that we needed to do something,” he said.

Even the act of hammering the crosses into the ground is a comfort to congregation members who appreciate the physical movement in addition to their prayers.

Koyama pointed out that in mass media, the phrase “thoughts and prayers” is often mocked as being synonymous with ineffectiveness and inaction.

“And so this is a direct kind of attempt to reclaim the notion that prayer is real and it has real meaning in our lives and in our society,” he said.

Stacey Kullgren of Winchester grew up in the Jaffrey church and appreciated the chance to participate in the memorial service.

“They’ve always been a faith community that’s willing to make a stand,” she said of the church.

Now the pastor of First Congregational Church of West Brookfield, Mass., Kullgren said she feels grateful to continue to be a part of the Jaffrey community’s work.

Other area pastors attended, including Susan Grant Rosen of United Church of Winchester. The crosses send a powerful message, she said, adding that she hopes state legislators will visit the church and take the next step.

But while gun violence was the theme of the afternoon, at least one attendee used the memorial service as an a spiritual experience and a time to mourn a loved one.

Since Chris Ordway moved to Jaffrey nearly three years ago, he said, he’s felt an urge to visit the church that he hadn’t explored until Sunday. Almost every time he helped hammer a cross into the hill, Ordway was overcome with emotion — but his grief was personal.

“Honestly I’ve been thinking a lot about my friend Lauren, who I lost, and she was so misunderstood,” he said. “She was transgender and nobody understood her.”

Lauren died in February 2017, Ordway said, and he doesn’t know how. But whether she died by suicide or something else, he said it derived from not being accepted by society.

His friend’s memory weighed heavily on his mind, but Ordway also came to Sunday’s event having survived his third suicide attempt, and felt “reborn,” he said.

“The third time I woke up everything was different, like in a good way,” he said, “like colors, sights, symbols — everything. I see everything.”

Sorry, there are no recent results for popular articles.

Sorry, there are no recent results for popular images.