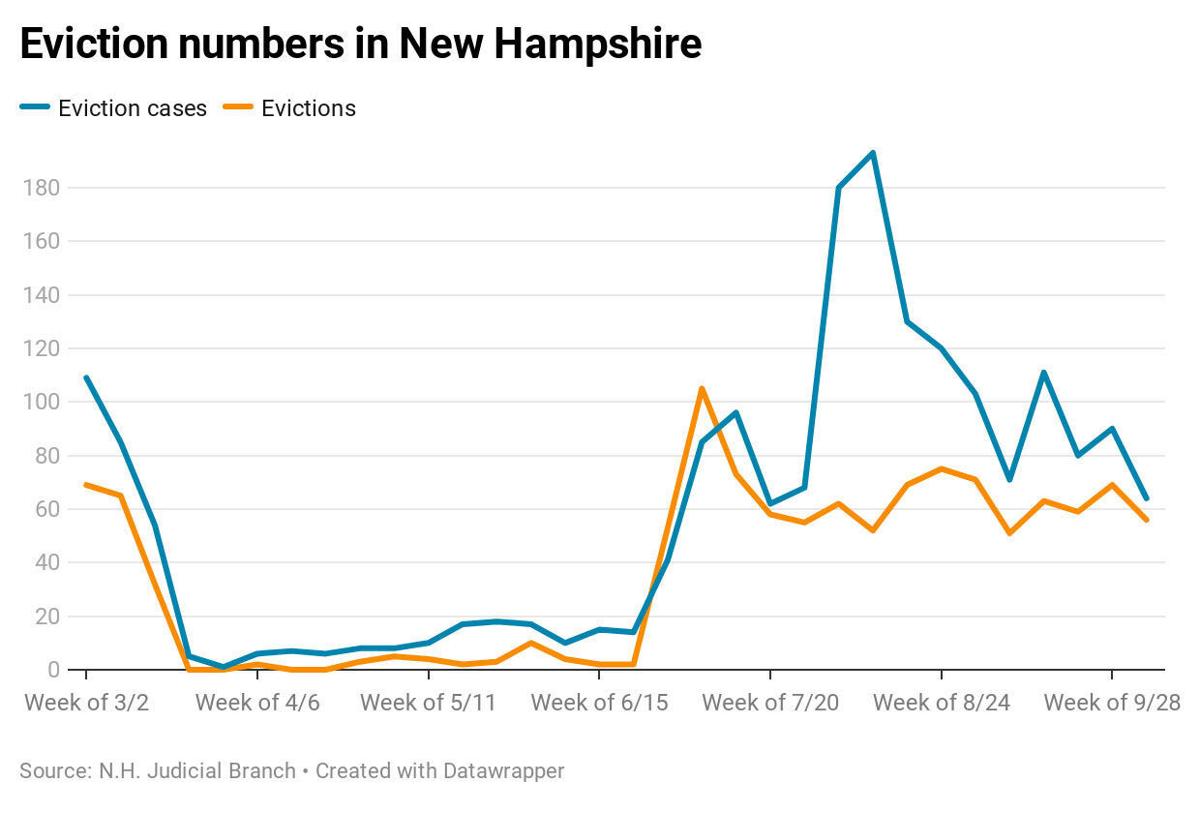 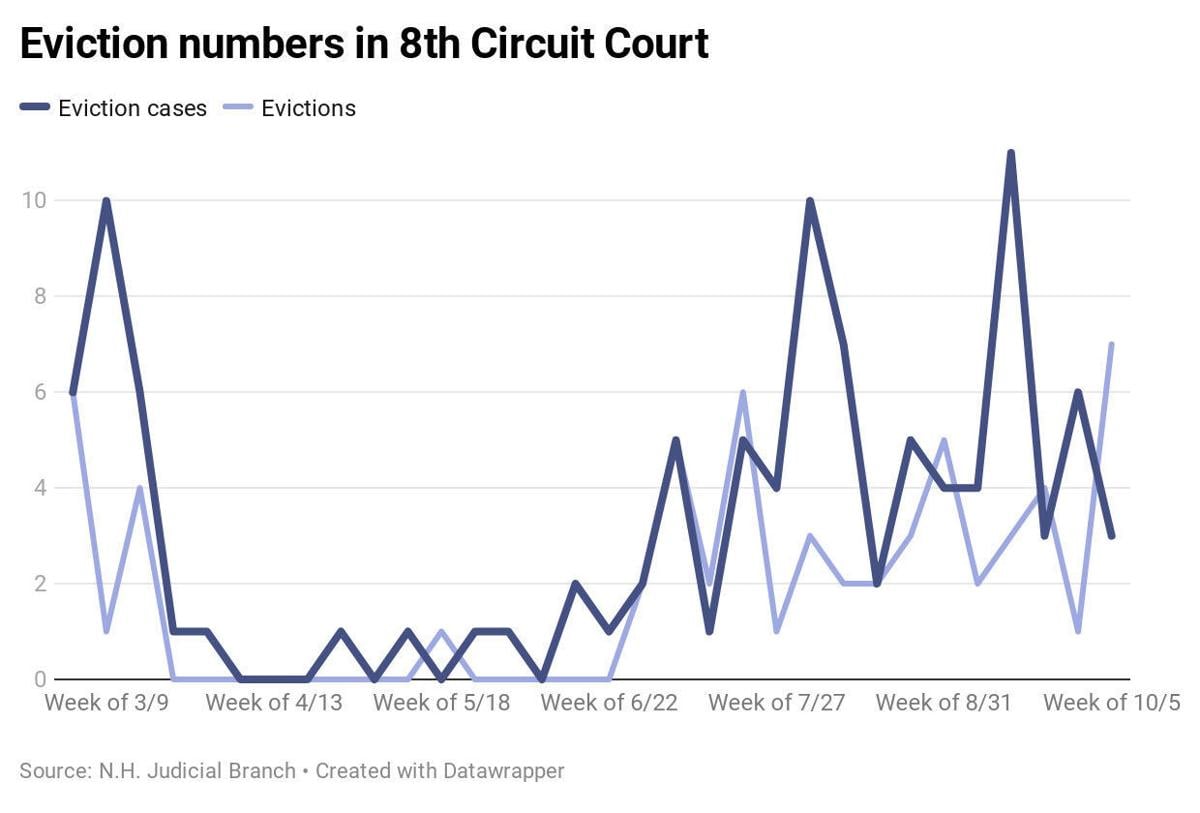 The pace of evictions in New Hampshire has not slowed significantly since a temporary federal moratorium was issued last month.

Evictions have even increased slightly in the Monadnock Region. The 8th Circuit Court, which covers Cheshire County and several towns in Hillsborough County, has authorized 17 total evictions in the five full weeks since then, compared to 15 in the five weeks prior.

The figures have puzzled New Hampshire housing advocates, who are struggling to identify the effects of the CDC moratorium because state courts do not track the number of declaration forms that tenants must submit to their landlords to claim protection under the order.

Ben Frost, managing director for policy and public affairs at the Bedford-based public entity N.H. Housing, noted that weekly eviction rates fell in August after a spike caused by the expiration of state and federal eviction bans in July. With the numbers remaining steady since then, Frost said he has not observed “much of an impact” from the CDC moratorium.

He explained, however, that tenants can still be evicted for lease violations other than failure to pay rent, which may represent some of the cases. N.H. Legal Assistance, a Concord nonprofit that offers legal services to low-income and elderly residents, has received a “steady stream” of those cases, according to Elliott Berry, who directs the organization’s Housing Justice Project.

“I would assume that in addition to the significant number that we see, there are a lot more of those,” he said. “That would lead me to believe that a number of these writs of possession are based on cases in which nonpayment [of rent] is not a factor.”

But tenants may also be getting evicted after failing to pay rent, despite fairly inclusive conditions to qualify for protection under the CDC moratorium, Berry added. He noted that for some, the threat of perjury may be intimidating enough to deter them from signing the declaration.

In other cases, Frost and Berry said, renters may simply be unaware that they are eligible for protection. Unlike the state and federal regulations earlier this year, which barred landlords from pursuing evictions in court, the CDC order requires tenants to proactively defend themselves.

“There’s a lot of people who don’t know anything about the moratorium,” Berry said. “Even if they did, they don’t know how to get their hands on a declaration [or] they don’t get it to the landlord prior to the service of the writ of possession. The whole thing is pretty complicated.”

Berry added that in several instances, landlords have refused to help a tenant obtain financial relief. He said the tenant can be protected under the CDC moratorium in those cases because they have taken steps to pay rent — but only if they know the eligibility conditions.

Informing renters of those conditions has been a priority for Beth Daniels, the chief operating officer at Southwestern Community Services, who said she has asked Monadnock Region landlords, nonprofits and human resources officers to refer people to SCS for housing aid.

She explained that a recent increase in the rate of requests for financial assistance from the agency, which is distributing relief funds allocated by the federal CARES Act, may be a result of the CDC order as tenants try to comply with the criteria for eviction protection. SCS had received 1,157 inquiries as of Thursday — up from 861 as of Sept. 10 — and has distributed nearly $1 million through the federal relief program since July 1, according to Daniels.

“With the CDC guidance, we think that is going to continue to have an effect, hopefully in a positive way because it is steering people in the right direction,” she said.

Daniels added that she does not know whether renters are taking advantage of the CDC order and expressed concern that the statewide data indicate many people still do not know they are eligible for protection.

While the number of evictions has remained steady since August, landlords have submitted noticeably fewer writ filings — or claims for eviction — in recent months. The number of weekly writ filings statewide dropped from nearly 200 in mid-August to just 64 for the week beginning Oct. 5. That decline has been muted in the Monadnock Region, where the 8th Circuit Court has received 27 eviction appeals in the five full weeks since the CDC order went into effect, compared to 28 in the five weeks before that.

Berry said the order may be deterring landlords from pursuing evictions because of the penalties they would face for ousting a protected tenant, which include significant fines and possible jail time. It may also be encouraging them to help renters acquire financial relief, he added.

Local landlords, for their part, say they are committed to helping tenants pay rent and have referred them to financial resources available through Southwestern Community Services, the city of Keene and other entities.

“The last thing I want to do is be kicking a tenant out on the street, especially as we’re entering the colder months,” said Josh Greenwald, a broker associate and sales manager at Greenwald Realty, which manages about 150 rental units in Keene.

Greenwald and Bill Beauregard, owner of Colonial Rental Management, which operates more than 100 units in Keene, said none of their tenants had submitted the CDC declaration form protecting them from eviction.

Beauregard said he has evicted one tenant since the beginning of September for a noise-related violation of their lease. While some of their tenants continue to struggle financially due to the pandemic, he and Greenwald noted that nobody has been evicted in recent months for failing to pay rent.

“If folks were out of work, we worked with them on weekly payments or however we could be of assistance,” Beauregard said.

Still, he and Greenwald expressed frustration that landlords have not received help themselves, as tenants have struggled to make their full monthly rent payments. Noting that the income reductions affect landlords’ families and other vendors in the community, whom they typically pay for housing-related services and renovations, Greenwald encouraged aid organizations to make sure people are aware of opportunities for relief.

“When I told my tenants about [available funds], they had no clue what I was talking about,” he said. “The money’s there. That’s what these programs are set up for.”

But it may not be available for much longer.

The deadline for housing assistance organizations to spend CARES Act funding is currently set for Dec. 30, as Congress continues to negotiate another stimulus package.

As of Sept. 24, New Hampshire’s five community action agencies, including SCS, had spent only about 10 percent of the $35 million in federal money they were allocated in June, according to N.H. Legal Assistance. Daniels noted that without an extension of the Dec. 30 deadline, most of the available funding will never be used.

“It would have almost been a mathematical impossibility to squeeze all of that [aid] into a six-month time period,” she said.

Despite the lack of conclusive evidence, Berry said he believes the CDC order has helped prevent evictions. With that protection expiring Dec. 31, just a day after emergency federal housing relief will no longer be available, he said renters face “an enormous cliff.”

Berry called on federal lawmakers to extend the spending deadline, adding that state officials should provide housing relief or consider reinstituting an eviction moratorium if they do not.

“I don’t like that idea, but it’s more palatable than seeing … hundreds of cases of eviction for nonpayment when the CDC moratorium expires,” he said.

This article has been updated to correct the name of Bill Beauregard's rental property business.