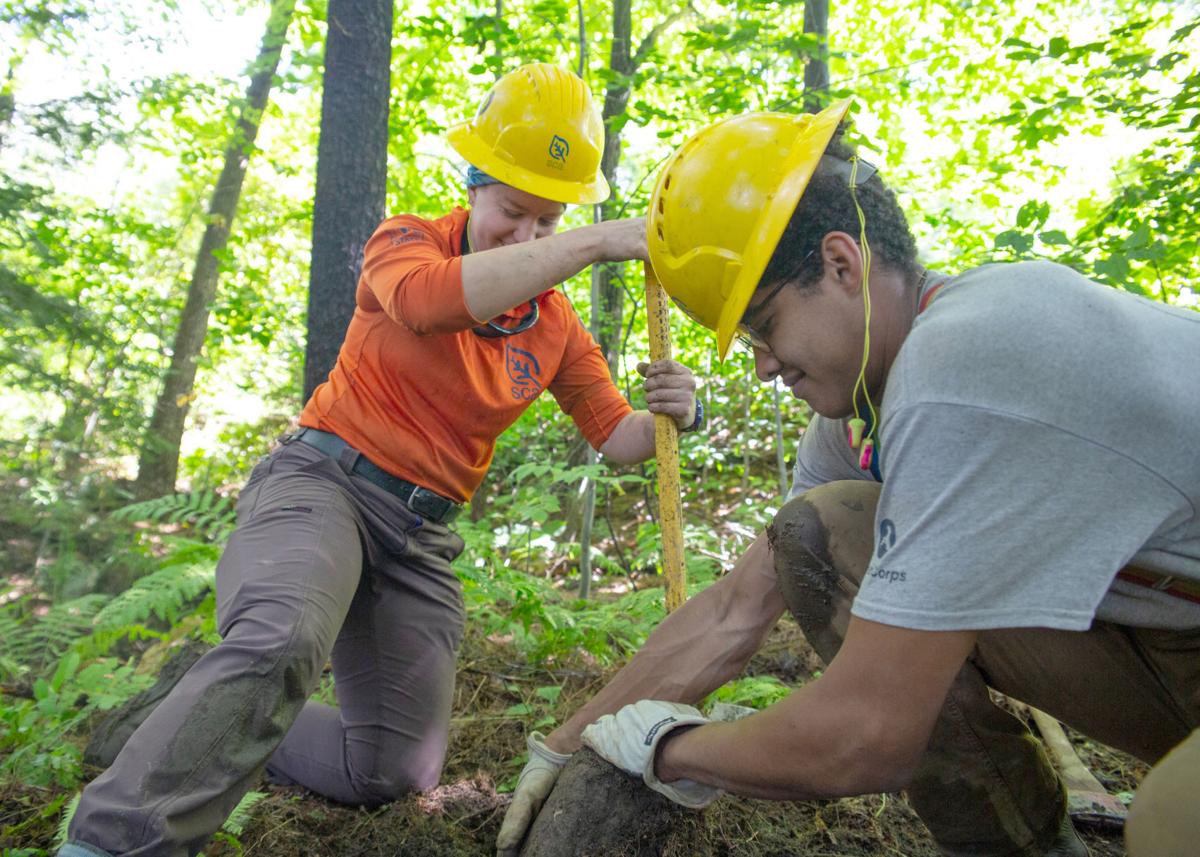 Kelly Rife and Efe Osemwengie of AmeriCorps work on building a pathway for the WLC Community Nature Park Thursday in Winchester. 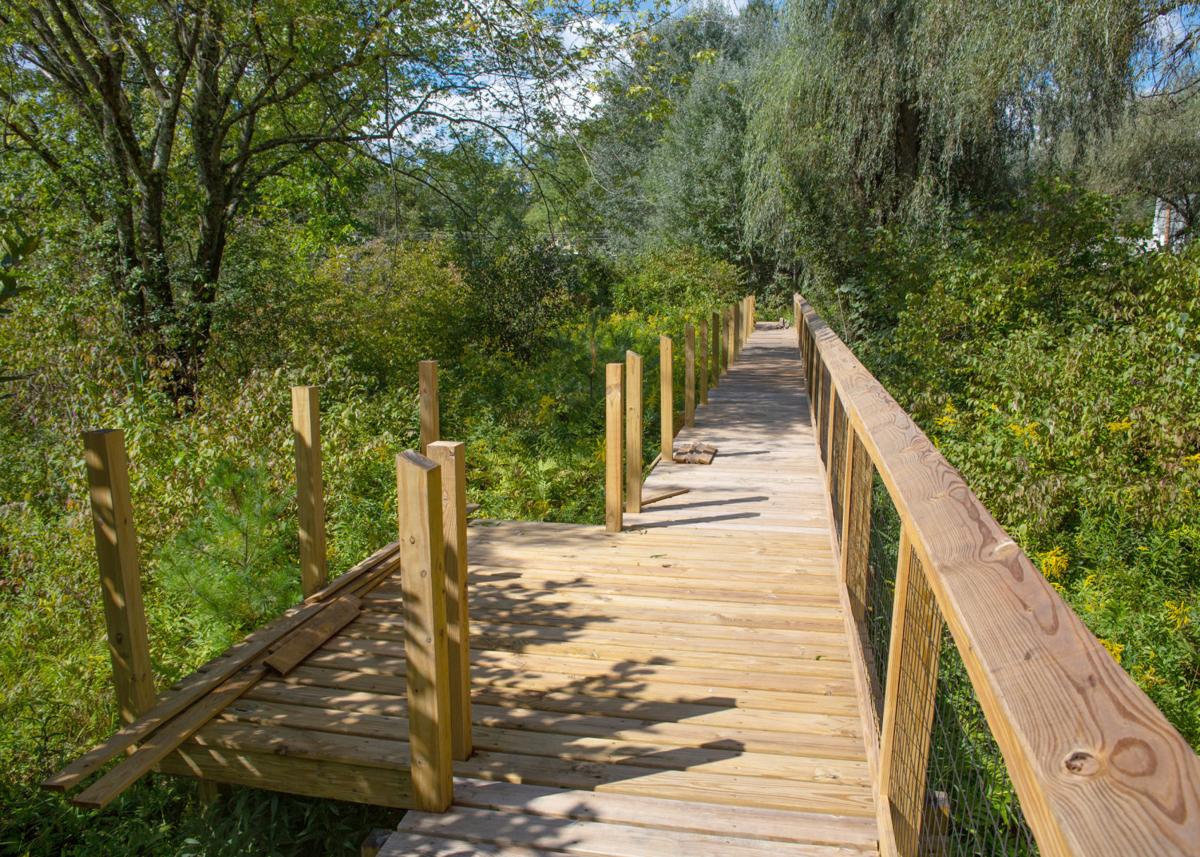 The boardwalk at the WLC Community Nature Park was under construction in Winchester Thursday.

Kelly Rife and Efe Osemwengie of AmeriCorps work on building a pathway for the WLC Community Nature Park Thursday in Winchester.

The boardwalk at the WLC Community Nature Park was under construction in Winchester Thursday.

WINCHESTER — Roberta Royce’s excitement was palpable as she walked along a nearly finished boardwalk, pointing to the things she loved — three tall willow trees, a swath of cattails, a small brook tumbling over rocks.

“We have a resident deer who’s made a bed out here,” she said, laughing, continuing on toward the wooded section of the soon-to-be community park.

Royce, the executive director of the Winchester Learning Center, has long had a vision for a nature park that would benefit both the center’s children and the greater community. Now, after several years of the land sitting undeveloped and unused, that vision is coming to fruition.

The 3.5-acre lot owned by the WLC, at the corner of Lawrence Street and Route 10, is being developed into a small network of trails. A gravel path through the park will provide wheelchair and stroller accessibility, while smaller dirt paths will allow visitors to explore the woods further.

The WLC is a United Way-funded child care, preschool and family-resource nonprofit. The center was first established 20 years ago in the basement of a local church, and eight years ago moved to Route 10, where it is currently, according to Royce. When the nonprofit purchased the building, it also bought the nearby parcel of land.

Thursday morning, a five-member crew from the Student Conservation Association — a national nonprofit that sends young people to improve public land and parks — was hard at work, clearing trails across that same parcel.

“We’re trying to make it exciting for the kiddos,” said crew leader Kelly Rife. “It’s definitely a labor of love.”

The group has been working on the park for the last two weeks, Rife said, under the guidance of Royce’s son-in-law Matt Coughlan, owner of Maine-based Recon Trail Design. In addition to the trails, the crew installed a series of tree stumps for children to play on, and was discussing what other features could be included, like a balance beam.

“I can’t say enough about the Student Conservation crew — they are wonderful,” Royce said, adding that the park has been a collaborative effort involving organizations and companies across the region.

The plan was set in motion about three years ago, when Stephen Gehlbach, then a representative of the N.H. Charitable Foundation, visited the WLC and learned of Royce’s vision. Gehlbach connected the center with the Monadnock Conservancy, of which he was a board member, according to the conservancy’s executive director, Ryan Owens.

Owens said the connection came at a time when the conservancy was looking to work with organizations beyond the conservation sphere and develop projects closer to where people live.

“For me, as executive director, this is still one of the things I’m most excited to talk about among all the things we’re doing,” he said. “I’m so pleased we have this opportunity to help a different organization and different group of people connect with nature, connect with the outdoors, when they might not otherwise have that opportunity.”

Royce’s vision and expertise in early childhood development, paired with the Monadnock Conservancy’s experience in land management and recreational infrastructure, was the perfect combination for a project that would benefit the community, Owens said.

“It was one of the easiest fundraising campaigns we’ve ever had to engage in, in part because it was just so different.”

Though the pandemic delayed the start of the park’s construction to this summer, the boardwalk connecting the center to the park was built last fall by the Conservancy’s land manager, Rick Brackett, and Lew Shelley of SnowHawk LLC, a Walpole-based trail design and construction company.

For several years, the lot was separated from the center by a residential property. Last year, the owners of that property agreed to sell part of the land so a boardwalk could be built connecting the center to the park. The Winchester Conservation Commission donated funds for the purchase, Royce said. Without that connecting land, the only way to access the park from the center would have been to walk along Route 10.

“Our hope is that this is just the start and every year we can add more features,” Royce said, adding that future plans include adding picnic tables and plaques identifying the park’s plants.

Royce said she wants students to see that they don’t have to travel far to find fascinating and beautiful places, but instead can explore their own communities.

But the park isn’t just for the benefit of the center’s children, she said. Royce wants anyone in the area looking for an accessible place to connect with nature to take advantage of the park.

As she was returning to the center on Thursday, Royce paused on the boardwalk, looking out at the thriving wetland. It was quiet under the late-summer sun, save for chirping insects and the rhythm of the conservation crew’s work.

“I see a lot of coffee breaks out here in my future,” she said, laughing.