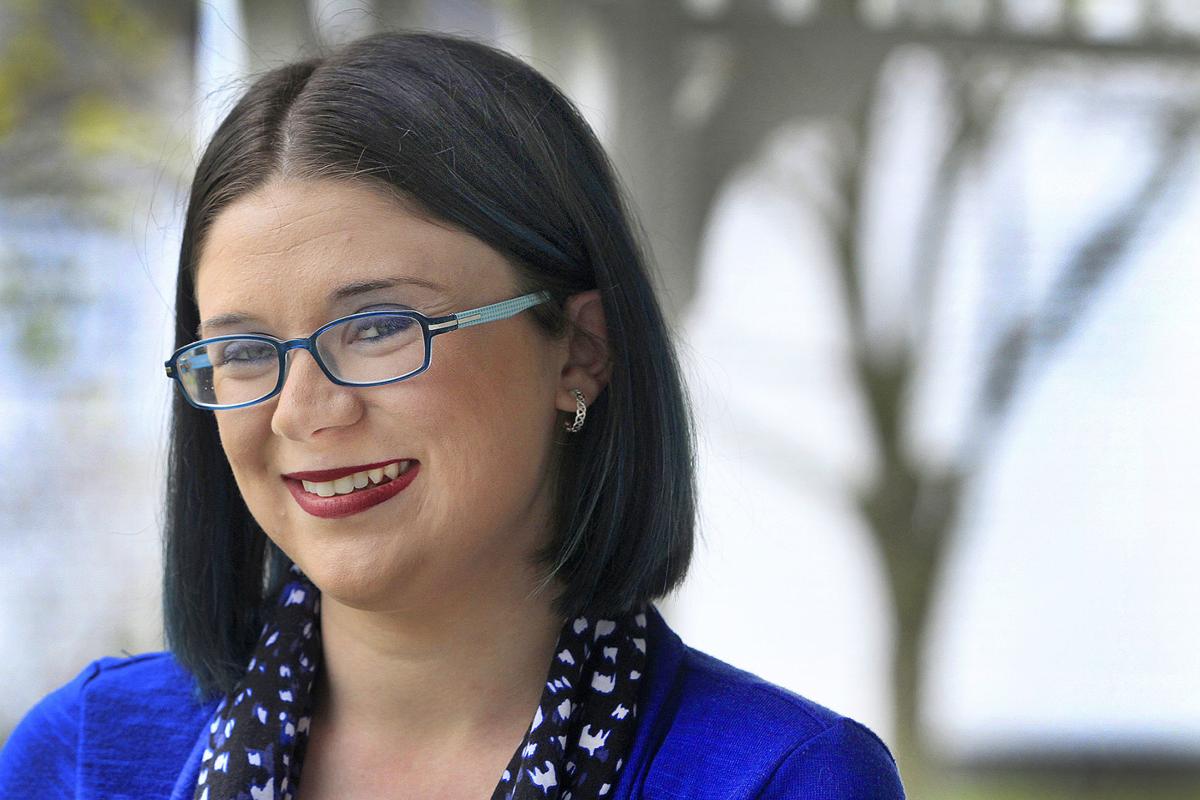 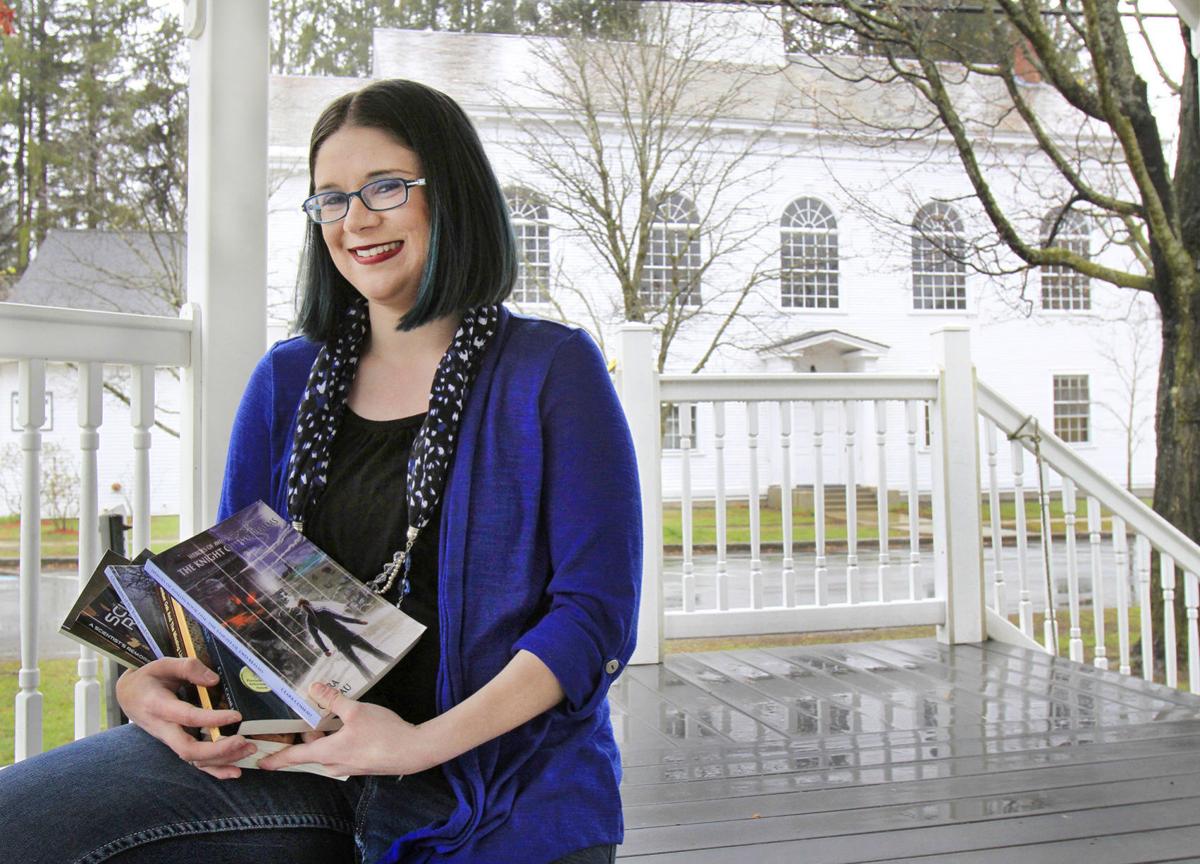 Ceara Comeau of Walpole, shown here on the town common with many of the books she’s written, recently released her ninth.

Ceara Comeau of Walpole, shown here on the town common with many of the books she’s written, recently released her ninth.

WALPOLE — When Ceara Comeau was in middle school, she was bullied for her writing.

Her campfire ghost stories were “too weird” for her classmates at Cornerstone Christian School in Claremont, and she struggled to fit in. But the teasing only made her more committed to her craft, and Comeau, now 27, recently released her ninth book.

“Ironically, their bullying me for these stories pushed me to write more,” said Comeau, a native of Acworth.

And though she originally started writing as a way to vent, Comeau soon learned it was something she not only loved, but had a knack for.

By 15, Comeau had self-published a paranormal series about kids solving mysteries — “Amber Oak Mysteries Volume 1” and “Adventures of the Young and Curious” — with the help of her parents, John and Charlotte.

“I was at camp, and I remember a group of us were taking a late-night walk in a nearby field, and I looked up at the sky, and there was a shooting star — I think the first one I had ever seen — and I wished my books would get somewhere,” Comeau said. “When I got home, my mom told me she had found a self-publishing company.”

Writing and publishing at a young age didn’t really resonate with her, though, until she was in her early 20s. Her mind was more focused on “having a big group of friends” back then, she admitted.

A graduate of Fall Mountain Regional High School, Comeau went on to attend Pensacola Christian Academy in Florida, where she received a bachelor’s degree in public relations and advertising. She has lived in Walpole since 2018.

After her first publications, Comeau — who has worked as front-end supervisor at Ocean State Job Lot in Walpole since last year — played around with different genres, ultimately shifting to sci-fi and fantasy.

Comeau’s father, John, said it was “amazing” to watch her go through the process at such a young age, but noted her work has grown since then.

Her latest self-published novel is a twist on characters she already knows well, from the tales of King Arthur.

The boy who became king, Merlin’s magic, the love story of Lancelot and Guinevere, and the evil plots against King Arthur by his half-sister were the inspiration for “Heroes of Avalon Book One: The Knights of Two Realms.”

Intended to be the first in a young-adult trilogy, her version of the Arthurian legend features many of the same characters as the original story, but their personalities are drastically different, Comeau said.

In Comeau’s story, Arthur is a god from a completely different galaxy, who, along with his three cousins, ended up on Earth as punishment.

“It’s taking King Arthur, putting him into space in a sense, and it’s very fantasy,” she explained. “I’ve always been obsessed with the legends, so I thought, ‘Let’s see what happens.’ ”

And while in the original story Guinevere was married to King Arthur, but in love with Lancelot — one of Arthur’s bravest and most loyal knights — Comeau’s version changes the relationship. Instead of a love triangle, she makes Lancelot into Arthur and Guinevere’s son.

Arthur’s sword, Excalibur, also plays a major role, but she said it’s a much different one than in the original tale.

Another departure from the classic legend is its setting. Comeau said that while stories of King Arthur are usually set in England, she decided to add an Irish twist.

“My husband [Jeffrey Rosello] and I went to Ireland for our honeymoon. We were in Galway, walking on this boardwalk, and I said, ‘I don’t know anything about England,’ but it’s all I ever thought of [for the book] until I turned around on the boardwalk, and this huge gust of wind came at me,” she said. “It just clicked. I thought, ‘It’s in Ireland, it’s right here.’ “

She noted that Celtic gods have also been thrown into the mix, from memories of mythology her dad told her about as a kid.

“The Knights of Two Realms” took about two years to write, Comeau said — six months of which were spent solely on character analysis and story-boarding.

“I like the planning part the most. The writing is the hard part,” she said, noting that she is self-taught. “My best friend from college and I call it ‘story storming,’ where you can keep doing the whole ‘What if? What if? What if?’ until you get to the point [where] it makes sense.”

Once the plot and characters click, Comeau said, she can turn to the writing itself. These days, amid the COVID-19 outbreak, she said her dedicated writing time typically falls on the weekends because she’s less busy with other activities now than usual.

“Now that I have finally practiced and looked into characters, they become so real to me,” she explained. “All the characters are just snippets of the author themselves, and I think that’s my favorite part, is what is the character like, why do they hate certain people, their quirks.”

In addition to “The Knight of Two Realms,” Comeau has also authored “Memories of Chronosalis” and “A Scientist’s Remorse,” which set the stage for her new trilogy.

“The last two books before this one were kind of introducing the reader to this galaxy, and it wasn’t until the ending of the first book that I realized this needs to be an entire series,” Comeau said. “You’re talking about one major galaxy, with billions of planets and many stories.”

Her latest book — available for purchase on her website, Barnes & Noble and Amazon — is written from the perspective of humans, while the second in the series will be written from the point of view of the gods. The third will be told by the villain, she said.

Book two, tentatively titled “A King’s Redemption,” is scheduled for release in spring 2021. The third book, “War of the Gods,” is slated to release a year later.

Comeau said her hope for the trilogy, along with her previous works, is to provide an escape for people when times are tough, like now.

“I wanted to bring people out of this world and into a new one where they could relate to these characters,” she said. “I feel like as a sci-fi [and] fantasy writer, it’s my responsibility to have people see things in a different way … different points of view. If I’m able to take people out of a problem and into a new world and am able to make them think, I have done my job.”

At a glance: Ceara Comeau