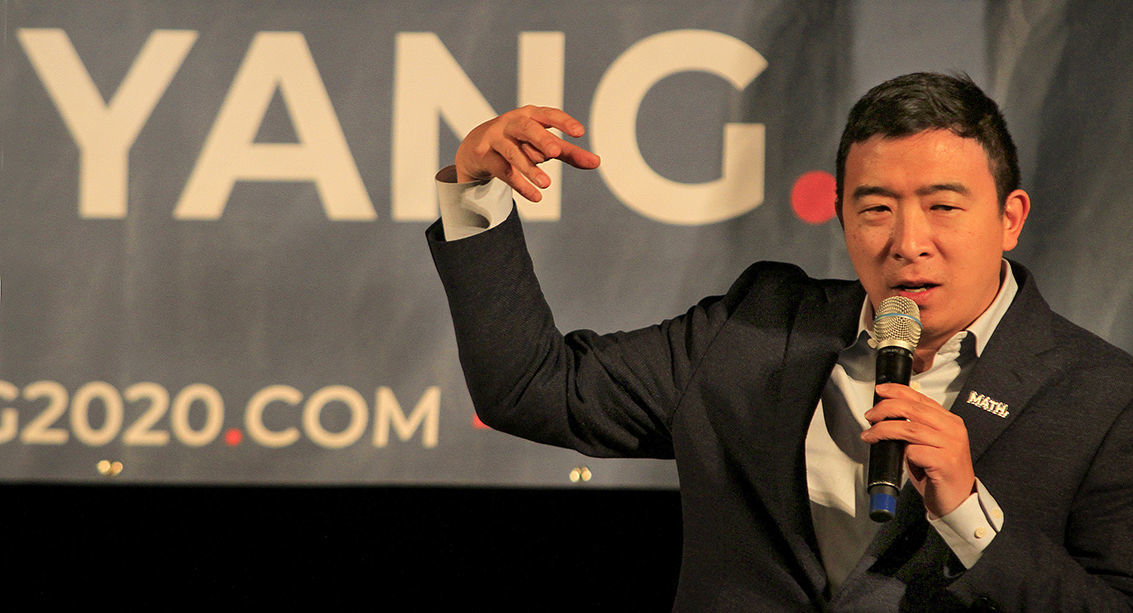 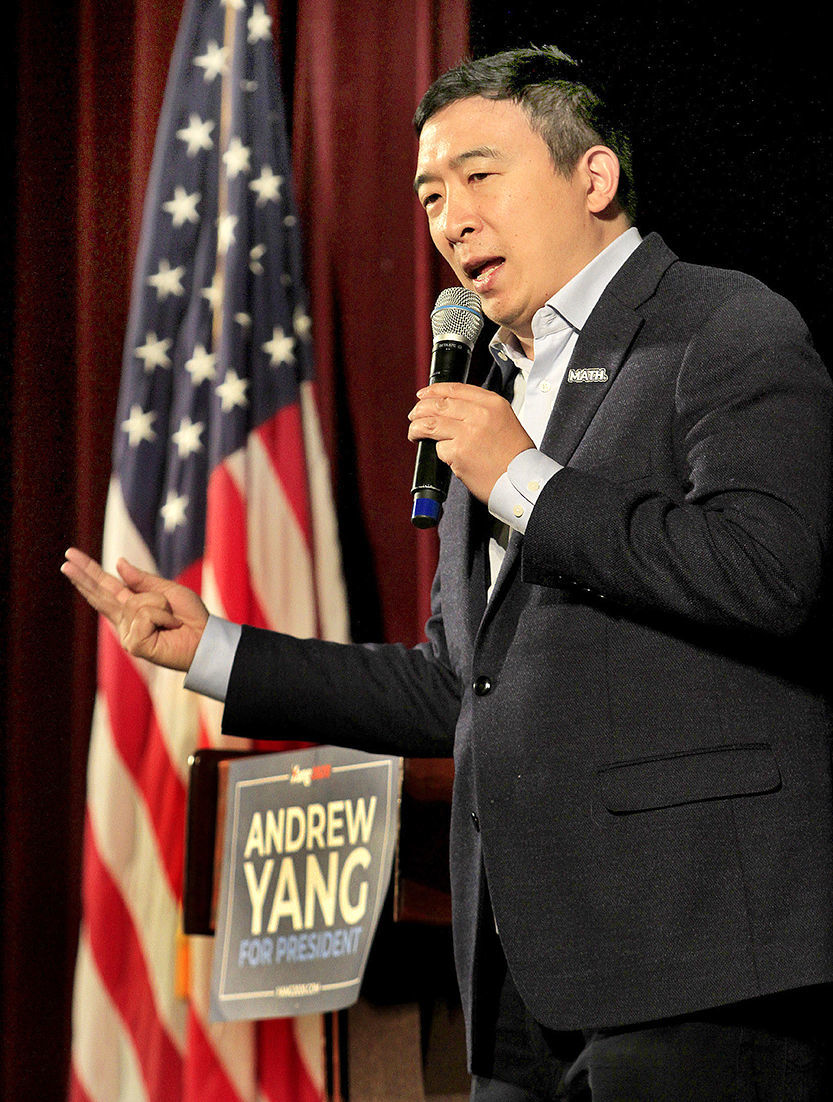 PETERBOROUGH — Only the fifth 2020 Democratic presidential hopeful to hold an event at the Peterborough Town House, Andrew Yang took a risk Friday night by making the step up to one of the region's largest and most historic venues.

For many of his supporters, the gamble paid off.

"I think when it comes to the question and answer stuff, he's the best one I've heard," Edward Sheldon, 38, of Swanzey said as Yang took selfies with voters. "... He's just three steps ahead. He understands the question and has already come up with a solution while you're talking."

Sheldon said he's not fully sure if he'll be voting for Yang on Feb. 11, but said he would certainly tell a pollster over the phone that he's planning on voting for Yang in order to keep him on the debate stage.

Yang, 44, brought a crowd of more than 175 to easily fill the lower floor, but did not bring enough voters out to fill the balcony, as his rivals Pete Buttigieg, Elizabeth Warren, Joe Biden and Bernie Sanders were able to.

While his campaign has emerged from the crowded field with momentum and registers in the mid-single digits in New Hampshire polling, he failed to meet the deadline Friday to qualify for the next televised debate in Iowa on Tuesday.

The Democratic National Committee increased the threshold to at least 5 percent in four DNC-approved national polls or 7 percent in two early-state polls, in addition to securing 225,000 donors. Former New York City Mayor Michael Bloomberg met the national polling qualifications, but because he is self-funding his campaign and does not accept donations, he will not be on stage in Des Moines.

Sheldon and other Yang supporters — or what campaign surrogate, former gubernatorial candidate and former Portsmouth Mayor Steve Marchand would call "Yang curious" — agreed that the more privacy conscious among Yang's coalition would be less likely to pick up the phone to answer a poll.

Still, several voters at the Town House Friday night said they like Yang and may even prefer him out of everyone else in the field, but will end up voting for a candidate they find more electable on primary day.

Linda Lindgren, a freelance writer in Francestown, said she really likes Yang, but will be voting for Sanders on Feb. 11.

"I do think Bernie's more electable," Lindgren, 67, said. "Because I think he has support across the whole nation in all different kinds of groups, a lot of good endorsements.

"I think [Sanders and Yang] would be great together, because I think Bernie has a good idea of what needs to happen right away," she continued. "I think Yang has a really good take on some of the things we're going to be facing in terms of [artificial intelligence] and automation."

Part of Yang's unique appeal to non-traditional Democratic primary voters reveals itself at events, often through more young men in attendance in addition to some of the only people who will go on the record to say they voted for Donald Trump in 2016.

During the questioning session, one voter told Yang he voted for Trump and was deciding between supporting the president or taking a chance on Yang in the primary as an independent voter. He added that he also attended a Sanders rally recently, but said he wouldn't dare tell anyone there that he voted for Trump.

Yang encouraged the crowd to give the man a round of applause, and they obliged without hesitation.

Fadil Sheikh, a freshman at the University of New England who grew up in Keene, told The Sentinel he considers himself a "Yang or Trump" voter.

"I think economic freedom is something that me and my family prioritize a lot," Sheikh said, later adding that after moving to the U.S. from India with his parents as an infant, he's now registered to vote absentee in New Hampshire for the primary since they became citizens a little more than a year ago.

"I think Yang really hits the sweet spot," Sheikh continued, "because I'm kind of a moderate, so I have a lot of like right-wing ideas and left-wing, and I think Yang is probably the most representative [2020 candidate] for me."

Joining Sheikh home from break was his friend from the Elm City, Harry Thomas, a freshman at the University of Missouri.

Thomas said he does not like the top-four polling candidates, but out of all of them, he said he would probably be the most comfortable supporting Sanders, were Yang to fall short.

Despite growing up with plenty of opportunities to see presidential candidates growing up, Thomas said Friday was the first time he's been on the trail because of how much he likes Yang.

"People in the Midwest feel like they don't have much of a vote, because there are so many people in a state that leans so red that they feel like they're gonna get drowned out [voting for a Democrat]," Thomas said, adding that he frequently lobbies his friends on campus to look into Yang's platform.

One of Yang's biggest applause lines came when he compared the Town House crowd to "five football stadiums" worth of Californians.

"You all are among the most powerful people in our country today," Yang told the crowd when talking about New Hampshire's role in the American political process.

Yang was also joined Friday night by his wife, Evelyn, and shared a tender moment with a voter who told him about losing her son to a fatal drug overdose in the opioid crisis.

.@AndrewYang steps off the stage in Peterborough to hug a woman who told him about losing her son to the opioid epidemic.

Earlier, she said she only knew about him through a flyer and by noticing he didn't wear a tie on the debate stage.

Then she decided to come to an event. pic.twitter.com/FbzKOJb7dh

The voter told Yang she only knew about him through a mailer and by remembering him as the guy who didn't wear a tie on the debate stage.

After a search into his plans, which include giving American adults $1,000 a month, she ended up face-to-face with Yang as he stepped down from the stage to listen to her story.

Yang asked if he could give her a hug, and they embraced as the crowd cheered.

"I'm so sorry, ma'am. There's nothing I know that I can do to makes your family whole," Yang said, holding back tears. "I mean, I have boys myself, and I can just imagine what losing one would mean to me and Evelyn and our family.

"But as your president, I guarantee I will do everything in my power to make sure it does not happen to another family."