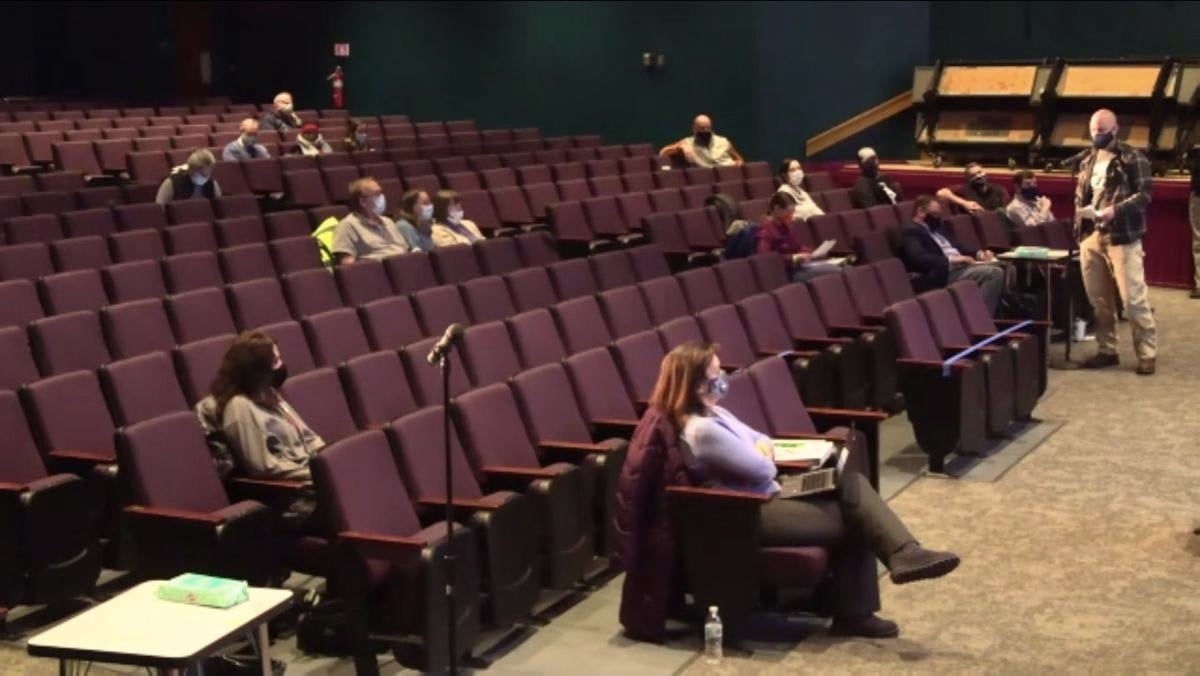 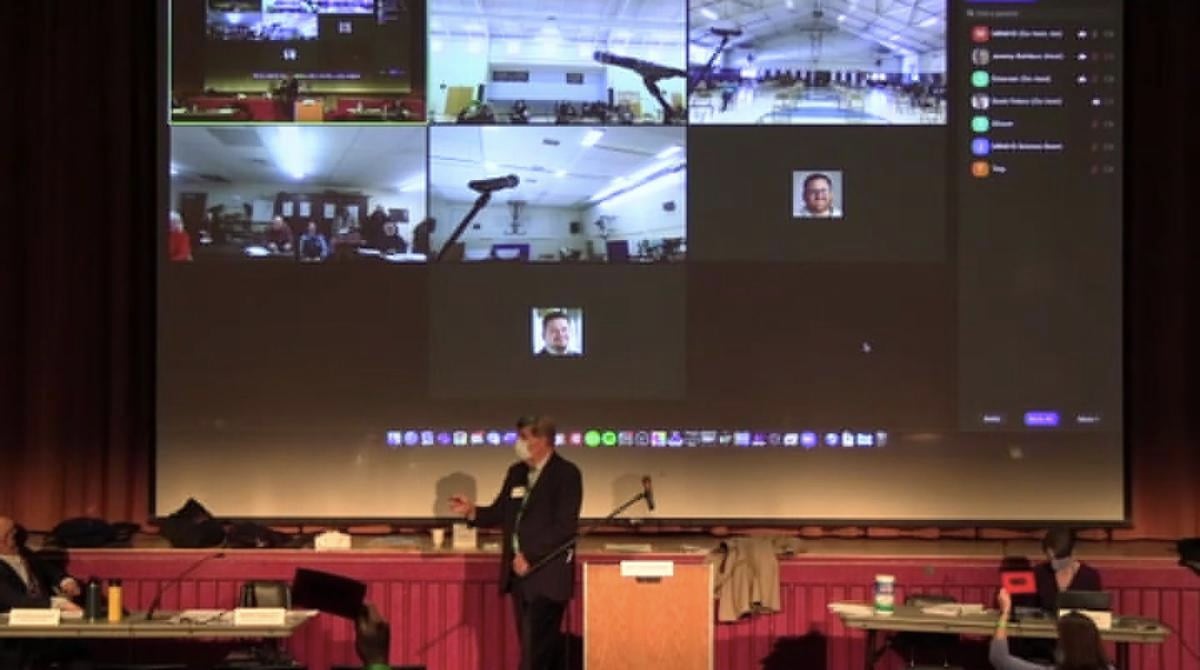 Monadnock voters also discussed a spending proposal for ventilation upgrades at two schools and reduced funding for a feasibility study by a single dollar, giving the district’s budget committee a chance to reverse its earlier decision to not support that warrant article.

Residents of the district — which covers Fitzwilliam, Gilsum, Richmond, Roxbury, Swanzey and Troy — will head to the polls March 9 to vote on the full warrant. If Monadnock voters reject the proposed operating budget, a $33.6 million default budget will take effect for the upcoming year.

In an effort to prevent viral transmission by limiting crowd sizes, residents attended Saturday’s deliberative session from four schools: Swanzey and Richmond residents at Monadnock Regional Middle/High School in Swanzey, Fitzwilliam residents at the town’s Emerson Elementary School, Gilsum and Roxbury residents at Gilsum STEAM Academy and Troy residents at Troy Elementary School. Discussion at the sites — which included two rooms at Monadnock Regional Middle/High School, with one for people opting not to wear a face covering — was conducted via Zoom and viewed remotely by The Sentinel.

Attendees first considered the $32.5 million budget proposal, which has been the subject of friction between the Monadnock school board and the budget committee.

The budget committee approved that figure at its Jan. 14 meeting, cutting $855,000 from the school board’s $33.3 million proposal in a move that several committee members argued would prevent the district from again running a large budget surplus, as it has for four consecutive years. Dan Coffman of Swanzey explained at that meeting that he calculated the 2.6 percent reduction by averaging the district’s budget surpluses for each of the past four years — which have ranged from $1.3 million to $2.4 million — and cutting that figure roughly in half.

The school board voted Jan. 19 to not support the $32.5 million budget proposal.

On Saturday, Monadnock voters rejected an amendment from Nicole Tommila of Fitzwilliam that would have restored the proposed spending level to $33.3 million, as the school board initially recommended.

Discussion around the budget proposal largely echoed arguments voiced earlier this month by the budget committee and the school board.

Several budget committee members, including Coffman, Chairman Adam Hopkins of Troy and Wayne Lechlider of Swanzey, reiterated their support for the $32.5 million budget, which Superintendent Lisa Witte has said would require cutting staff and programming.

“We believe that our professional administrators can make choices to find that 2.5 percent in the budget,” Hopkins said Saturday.

School board members argued, however, that the district’s surplus this past year was exaggerated by state funds it received for COVID-related expenses. They added that the district should plan as if it will face the maximum possible costs for uncertain expenses like health insurance and busing.

“We budget on worst-case scenarios to our contracts … rather than gambling and budgeting lower amounts,” school board Chairman Scott Peters of Troy said.

Attendees voted 69–37 to reject Tommila’s amendment. They also rejected amendments from Douglas Bersaw of Richmond, a budget committee member, to further slash the operating budget to $32 million and from Karen Wheeler of Gilsum, a school committee member, to increase it to $33 million, respectively.

Janel Morin, the district’s business administrator, said that $600,000 would go toward installing new HVAC units at the Middle/High School, with the remainder spent on similar installations in Gilsum. She told The Sentinel last week that since the old ventilation systems date to the 1980s and are “getting towards the end of their working life,” the district wants to replace them before they break down.

Residents at the deliberative session Saturday also voted 64–37 to reduce funding for a feasibility study, previously proposed at $300,000, by a single dollar.

Edward Sheldon of Swanzey proposed the change — which would not materially affect work on the district’s plan to consolidate Swanzey’s two elementary schools into one and renovate schools in Fitzwilliam, Gilsum and Troy — in an effort to “spark reconsideration” from his colleagues on the budget committee, who voted Jan. 14 to not support that spending. Sheldon argued that the project, estimated to eventually cost $23.8 million, would help the district avoid expensive repairs to keep the aging buildings compliant with code.

“It’s going to reduce, significantly, the amount of compliance-related upgrades and remodels that we’re going to have to do,” he said. “At the end of the day, it’s going to save the taxpayers money.”

Lechlider and Coffman, both of whom voted Jan. 14 to not support the feasibility study, indicated that because the budget proposal remained at $32.5 million, they would reverse their votes at the budget committee’s meeting Saturday afternoon.

The committee voted unanimously to support the $299,999 expenditure at that session, according to Hopkins.

Though it won’t be on the ballot this year, Lechlider and Coffman also urged Monadnock voters to support a bond issue down the road to help pay for the project.

A trio of contract-related warrant articles also advanced to the ballot without much discussion Saturday.

The collective bargaining agreements, negotiated by the administration and union representatives, would increase staff wages and benefits across the district. In an effort to avoid negotiating multiple contracts again in the same year, the proposed agreements would last one, two and three years, respectively.

Debby Gove, a Monadnock instructor who said she has worked in the district for more than 30 years, thanked the school board and administration for “thoughtful” negotiations.

“We feel like this was a fair agreement,” she said.

District residents will consider the full Monadnock warrant at the polls March 9.Caleb Symons can be reached at 352-1234, extension 1420, or csymons@keenesentinel.com. Follow him on Twitter @CalebSymonsKS.