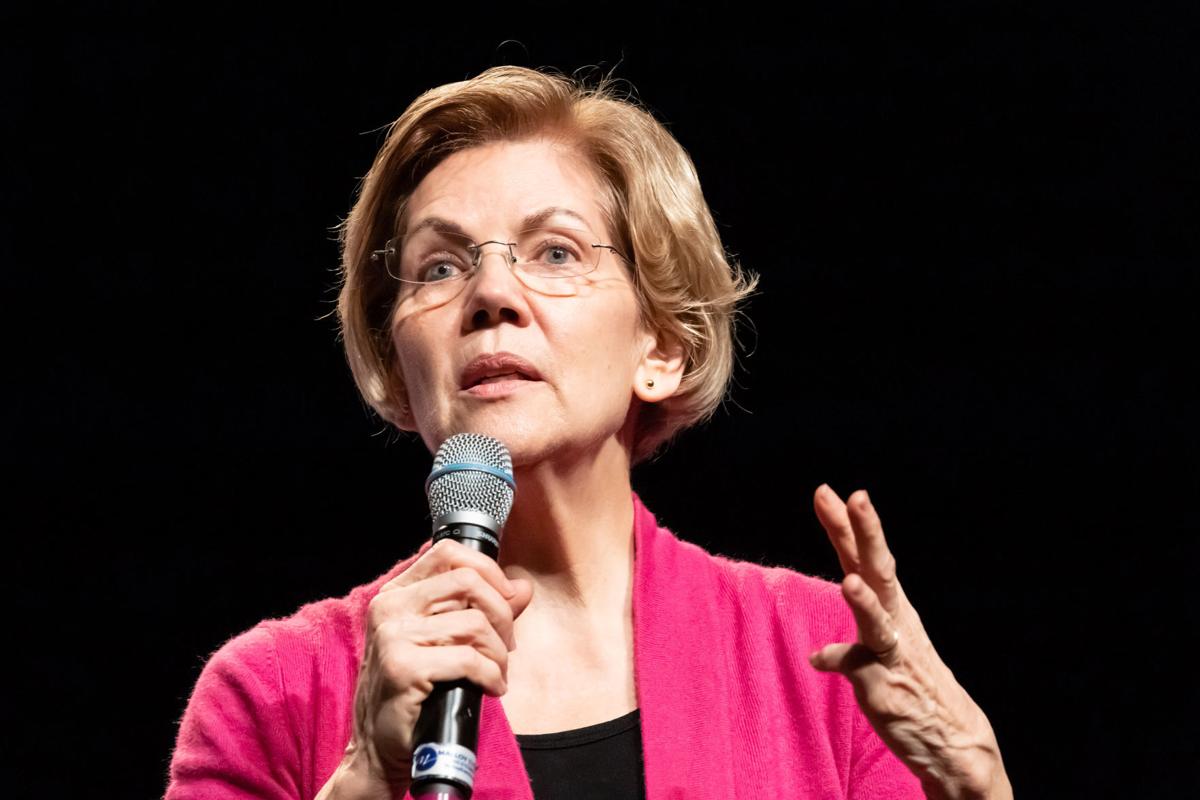 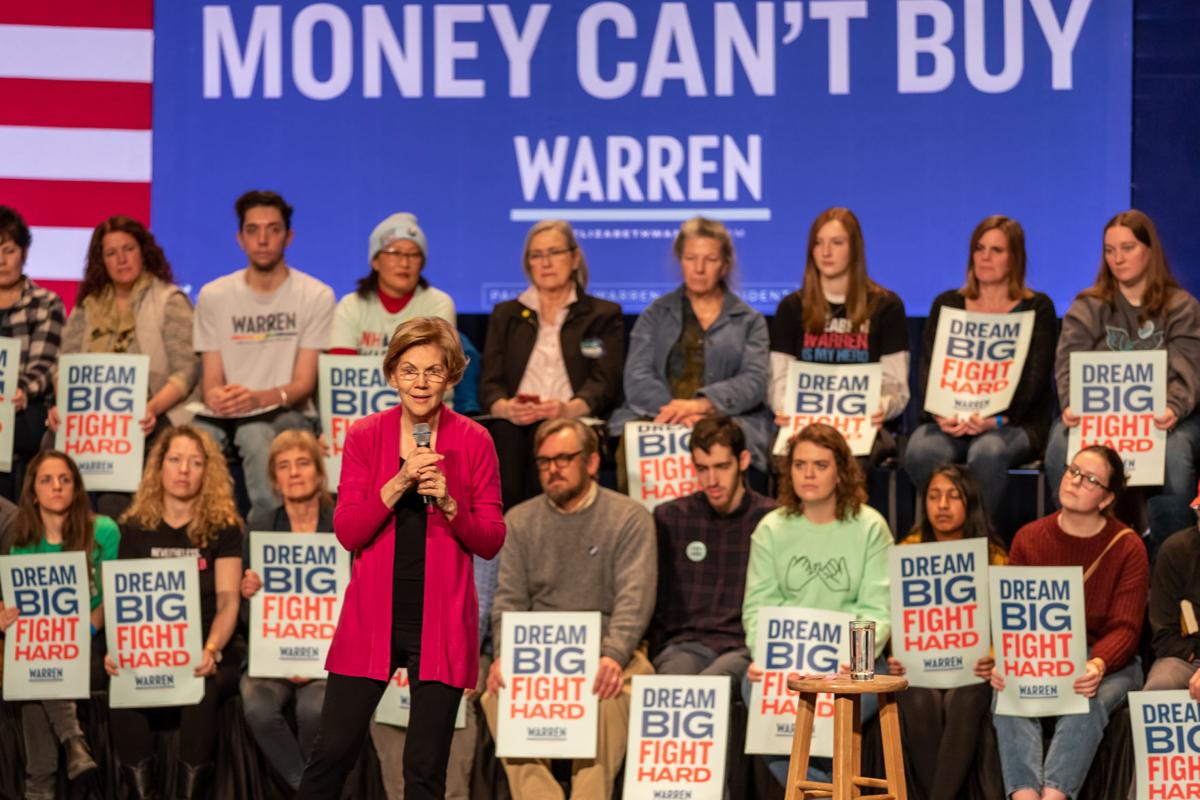 U.S. Sen. Elizabeth Warren, D-Mass., addresses an audience of hundreds of people gathered at The Colonial Theatre in Keene Feb. 4. Warren was seen as having among the best “ground games” in New Hampshire, but finished a relatively weak fourth in this past week’s Democratic primary.

U.S. Sen. Elizabeth Warren, D-Mass., addresses an audience of hundreds of people gathered at The Colonial Theatre in Keene Feb. 4. Warren was seen as having among the best “ground games” in New Hampshire, but finished a relatively weak fourth in this past week’s Democratic primary.

The morning after the Iowa caucuses — with results still unknown due to a software flaw — Democratic presidential candidate U.S. Sen. Elizabeth Warren returned to the Granite State, pitching an agenda of big structural change to end corruption in Washington.

“When you see a government that works great for those with money, works great for those that can hire an army of lobbyists and lawyers and is not working great for everyone else, that is corruption, plain and simple, and we need to call it out for what it is,” Warren, of Massachusetts, told the hundreds gathered at The Colonial Theatre in Keene Tuesday morning.

Tracing her journey from a middle-class childhood in Oklahoma, Warren, 70, said she landed her “dream job” of becoming a special-education teacher in the public-school system only to have her position offered to someone else when she became pregnant.

She then returned to a state university (Rutgers Law School in New Jersey) to study law, she said, and became a professor at the same school, researching what was happening to American families. The government was working for the people at the top of the economic ladder but not everyday Americans, according to Warren, a discovery she said prompted her turn to politics, first as the architect of the Consumer Financial Protection Bureau, formed in 2011, and later by being elected in 2013 as a Massachusetts senator.

Speaking directly to concerns that a woman cannot win the presidency, Warren said “The world has changed since 2016,” and noted that in 2018, Democrats took back the House of Representatives and several state legislatures “because of women candidates and because of women who got out and fought for those candidates.”

In an argument for her electability in the general election, Warren said her plans, such as those to cancel student debt, expand Social Security and pass anti-corruption legislation, are popular not only with Democrats, but among independent and Republican voters as well.

She touted her proposal to tax two percent of every dollar of net worth above $50 million, which she said could pay for universal childcare and tuition-free public college and allow for an additional $800 billion in federal funding for the country’s public schools.

“The best way to invest in our future is to invest in children,” she said, adding that the 2020 presidential race has opened the door to rework the American economy and society.

“This is no time for small ideas. This is no time to nibble around the edges of these big problems. This is a time to face our problems head on and offer the big structural change it will take to fix them,” Warren said.

On climate change, she said she’d do “everything a president can do all by herself,” including mandating against mining or drilling on federal land starting her first day in office.

“We need to innovate out of this problem,” Warren said, advocating investment in research and development in green energy production, which she said could add more than one million new union jobs in green manufacturing to the U.S. economy.

Responding to several questions about immigration, Warren said she would close the Trump administration’s immigrant detention centers and end the practice of separating families at the border.

“When people come to us seeking help, we have to treat them with dignity and respect, not put them in harm’s way,” she said, adding that she’d also restore and expand aid to Central America.

Many in the crowd said they are committed to voting for Warren in the New Hampshire primary next Tuesday, often citing her energy, intelligence, and experience fighting for everyday people.

“I think she’s the smartest and most insightful. It’s cliché, but she has plans and a record of helping people who are traditionally oppressed and disadvantaged. She’s our greatest hope for beating Trump because she gets broad support from all demographics, ages and backgrounds, and I think that’s because she’s fought hard for all of us,” said Ryan Reed, 40, a Keene resident and nonprofit executive.

Several attendees said the thoroughness of Warren’s plans is what pulled them to her over fellow progressive candidate U.S. Sen. Bernie Sanders, I-Vt.

Graduate school student and Rindge resident Bridget Gordon said she was never involved in politics before, but Warren got her interested in the process.

“I think she speaks to a lot of different types of people and has come up with solutions that will help everyone,” said Gordon, 24.

Like every other person interviewed, Gordon said that even if Warren doesn’t win the nomination, she’ll vote for whoever is at the top of the Democratic ticket.

A week out from the primary, however, many in the crowd said they were still undecided.

Aggie Cersosimo of Chesterfield said she came to Tuesday’s town hall to prepare for her first time voting as an American citizen and is still deciding between Warren, Sanders and former Vice President Joe Biden.

“I like that she’s a strong woman and can fight for our rights,” said Cersosimo, 40, who is originally from Italy.

Cersosimo’s neighbor and fellow stay-at-home mom, Inga Plisz, likewise said she appreciates Warren’s ability to stand up to powerful interests, but is still deciding between Warren and Biden, and is stressed about making a decision.

“I think it’s important to pick someone with chances against Trump, and as much as I’d like to think so, I don’t think America is ready for a woman president,” Plisz said. “I normally wouldn’t think that way, but we have to defeat Trump.”