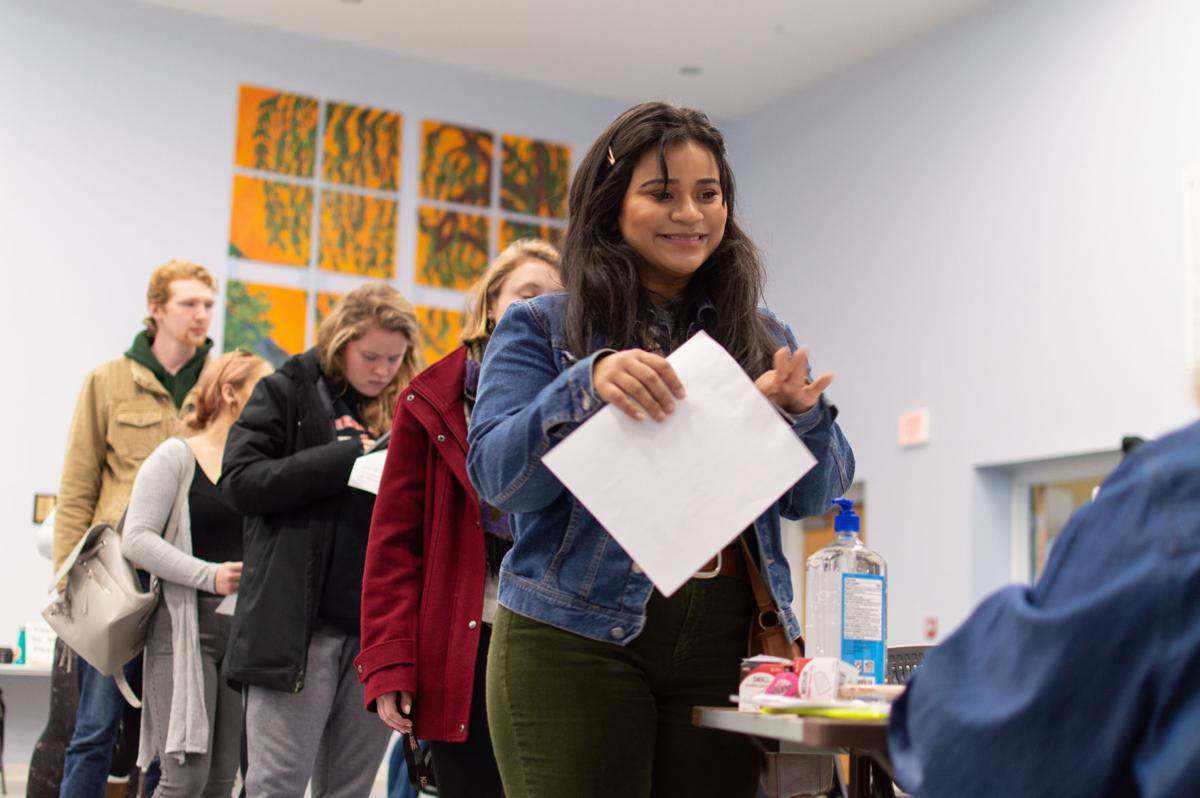 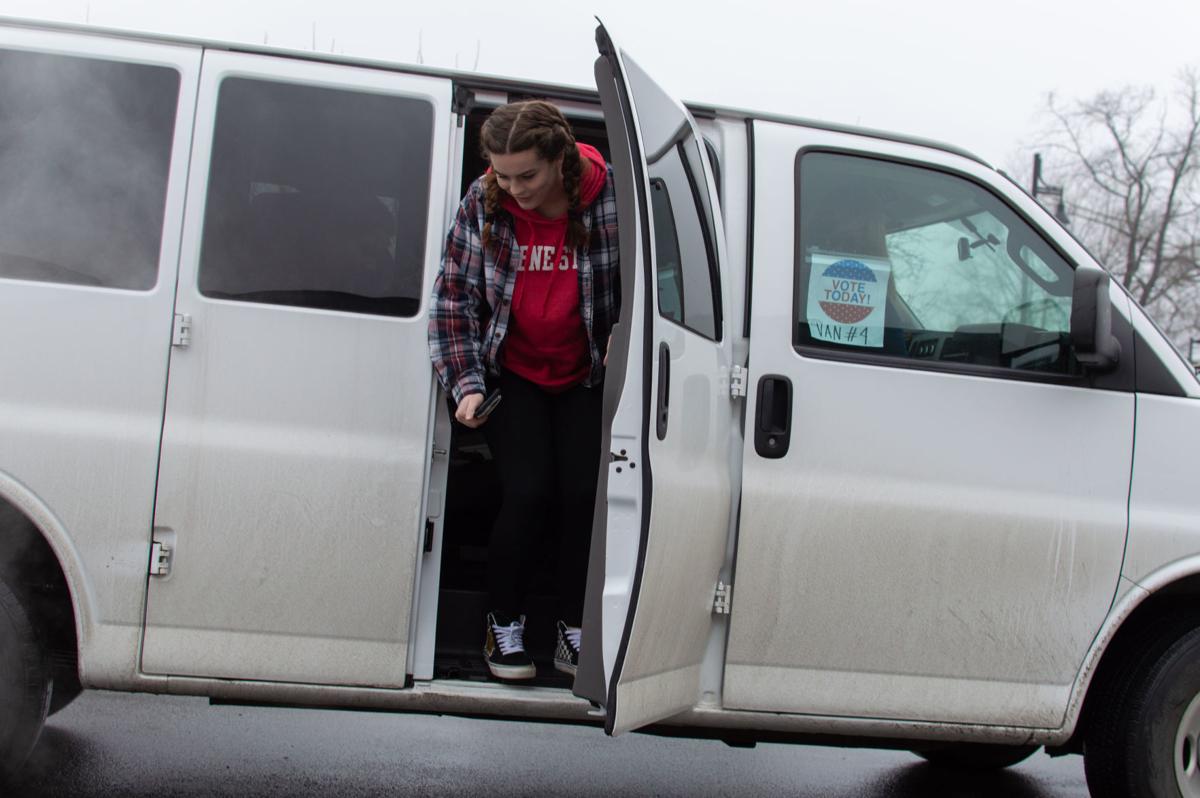 Isabel Buxton, 18, hops out of a van that shuttled her from Keene State College to her polling place in Ward 1 Tuesday. 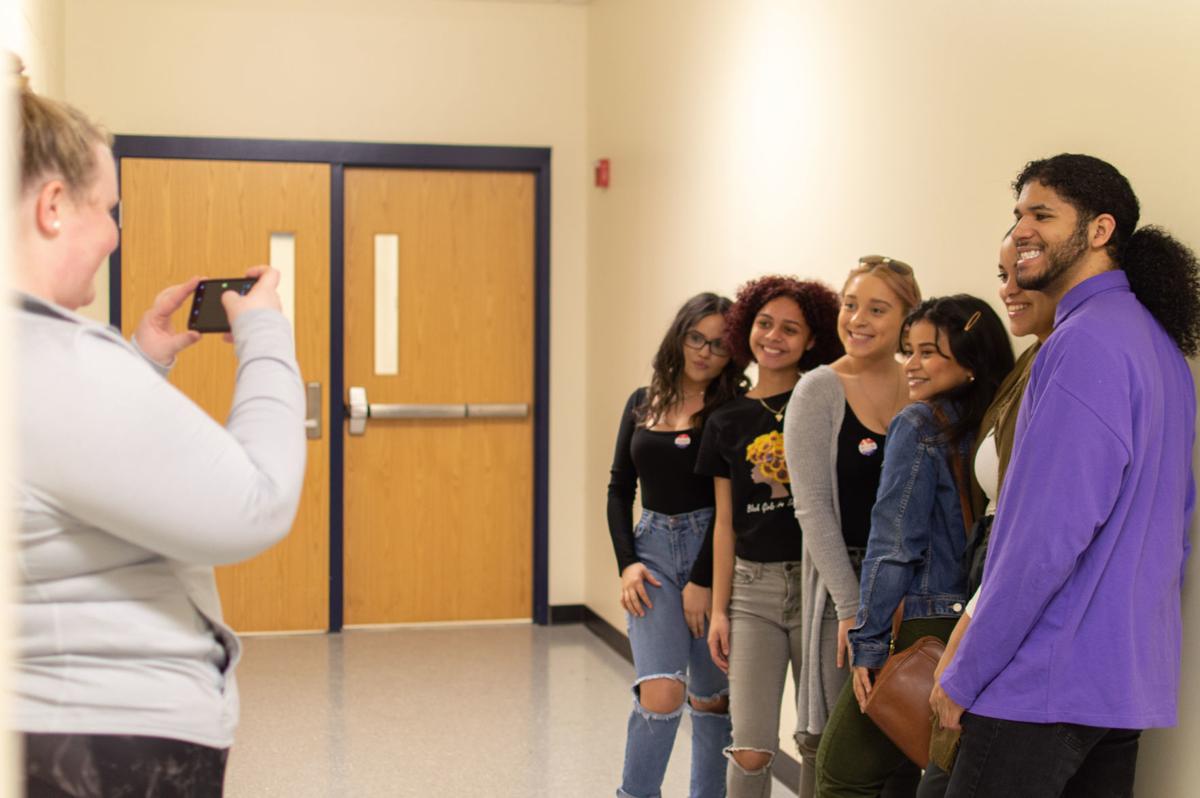 A group of friends who attend Keene State College poses for a quick photo after voting for U.S. Sen. Bernie Sanders in Tuesday's primary election. 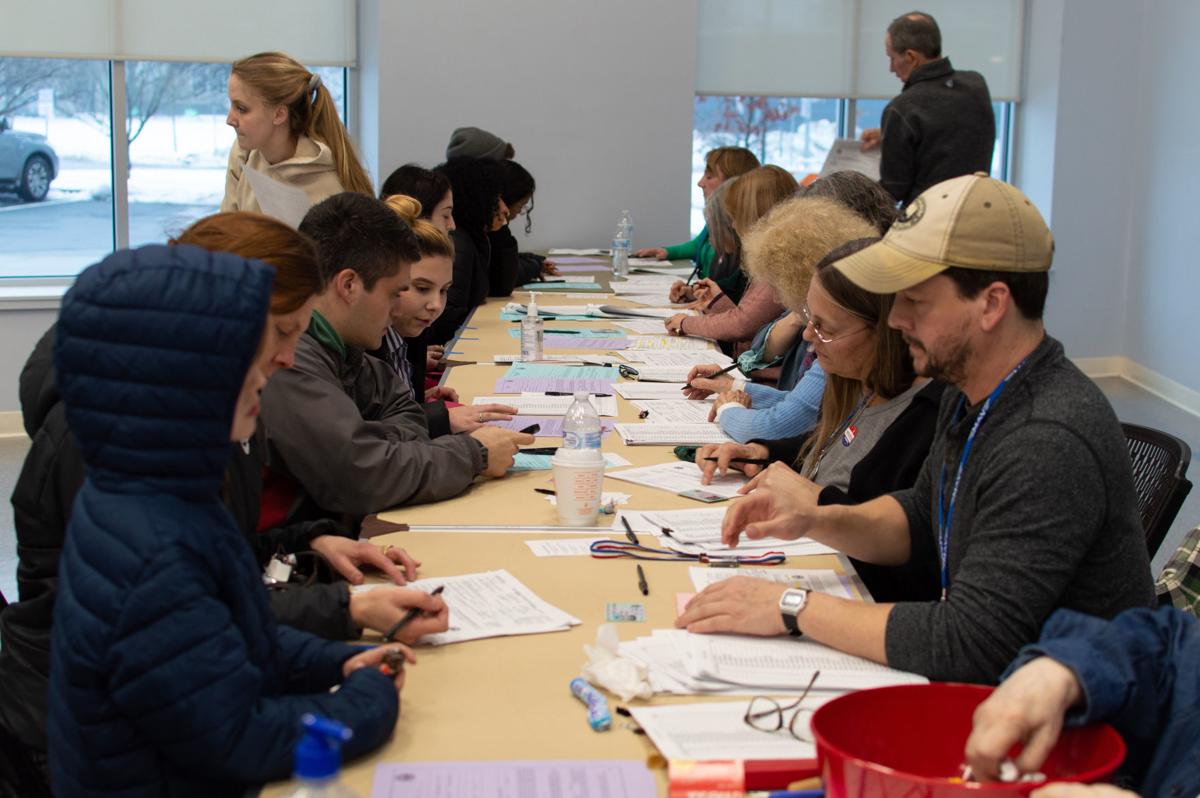 Isabel Buxton, 18, hops out of a van that shuttled her from Keene State College to her polling place in Ward 1 Tuesday.

A group of friends who attend Keene State College poses for a quick photo after voting for U.S. Sen. Bernie Sanders in Tuesday's primary election.

A political revolution topped off with DIY photo shoots and free tacos — Keene State College students made the most of what was, for many, their first presidential election.

For others, Tuesday’s primary was exciting in its own right.

The college sits in Keene’s Ward 1, so students living in campus dorms reported to the Blastos Room in the city-owned complex on Marlboro Street (next to Keene Ice) to cast their ballots.

City Councilor Randy L. Filiault volunteered at the ward’s polling place for part of the afternoon.

“I’ve been here a couple hours, and Keene State students are dominating this ward,” he said. If pressed to put a number on it, he said he’d guess 90 percent of voters who walked through the doors were students.

It’s good news, Filiault said, because hopefully this will be the first of many elections for them.

A few students had to hide their pride in the polling place, unaware of the rules against wearing campaign paraphernalia. Once they stepped outside, though, many eagerly showed off their Bernie buttons and T-shirts when asked who’d earned their vote.

The overwhelming majority who spoke to a reporter Tuesday afternoon supported U.S. Sen. Bernie Sanders of Vermont, and nearly all of those who could vote in 2016 said they’d backed him then, too.

Sanders, 78, won about 34 percent of the vote across Keene’s five wards Tuesday, with former South Bend, Ind., Mayor Pete Buttigieg trailing with 21 percent. Ward 1 gave Sanders his largest victory in the city, though, with 45 percent, leaving Buttigieg in the dust by almost 30 points.

Statewide, Sanders tallied the most votes, with Buttigieg less than two points behind, as of early Wednesday morning, when 91 percent of precincts had reported results.

Corinne O’Flaherty was a Sanders supporter in the last election, and she’s volunteered locally with Students for Bernie for the past two semesters. Coming from Sanders’ mayoral stomping grounds of Burlington, Vt., O’Flaherty said he “transformed that city,” and she believes he can do the same for the country.

Jennifer Mejia, a junior, and sophomore Genesis Rivas said they were excited to vote for Sanders in their first presidential election. Neither worried about his age or health negatively affecting his chances of getting elected or his ability to serve as president. Mejia said she considered it, “but it still didn’t stop me, because if someone’s gonna be good at what they’re doing and I believe they can get America somewhere … if he can do the job, why wouldn’t I [vote for him]?”

Mejia and other students said they appreciate the senator’s discussion of issues like the high cost of higher education, and though they aren’t convinced he’ll succeed in making public college tuition- and debt-free, they argued his bold ideas have the power to move the needle over time.

Whomever their choice, students overall seemed to be concerned more with voting their values than the most “electable” candidate. Far removed from pollsters and cable news contributors, Keene’s college students looked delighted as they cast their ballots, waiting for their friends to take group photos in the lobby.

The nation turned its attention to New Hampshire and its student voters after bills passed by the Legislature in the past couple of years were accused of trying to restrict young people from casting their ballots. The American Civil Liberties Union of New Hampshire and the N.H. Democratic Party have sued the state over a law that requires students who vote with an out-of-state ID to then get a new driver’s license and car registration in the Granite State within 60 days.

Students didn’t express confusion Tuesday over their residency affecting whether or not they could vote, and poll workers in the ward said they hadn’t heard any concerns about it.

Around 4:30 p.m., Ward 1 Moderator Colin “Bob” Lyle said the day had been relatively slow but was starting to pick up the pace. He said the determining factor would be the students, who poured in from vans that were shuttling them from the campus just over a mile away.

Because so many register the day of the primary, he noted, this ward is one of the toughest for volunteers and a few staff members, who he quipped certainly don’t do it for the money.

“It’s really a matter of people want to help out with elections,” Lyle said.

Ward 1 added the most new voters Tuesday with 501, which accounts for nearly 12 percent of the precinct’s new total of 4,354 registered voters.

Same-day registrants cast 37 percent of the ballots in Ward 1. The next closest showing was Ward 5 (which includes off-campus student housing) with 341 new voters casting 17 percent of its ballots.

To help mitigate the flood of bright-eyed voters-to-be, smiling greeters stood at the interior entrance to the Blastos Room and proactively asked questions to offer directions. Those who needed to register or change their address were ushered to a long table with eight or nine poll workers who processed papers as fast as they could. Each time another shuttle emptied its cargo, the long table filled up again — as did a section of overflow seating — and a line formed behind the checklist supervisor.

In its current form, the shuttle service is new for a presidential primary, according to Mark Gempler, who works in Keene State’s Office of Ceremonies and Events. He’s also on the steering committee of the KSC American Democracy Project, and he’s the coordinator of KSC Votes, the coalition that organizes the shuttle service.

In the past, Gempler said, there were multiple, disjointed ventures to help students get to the polls, from community members volunteering to use their personal vehicles to every political campaign begging to participate.

“And we said ‘No, this is Keene State’s responsibility,’ ” he said.

Gempler began coordinating with students, faculty, staff, campaign personnel, activists and community members to create KSC Votes, which concentrated the scattered efforts to offer an efficient shuttle service not affiliated with any one political group or organization. The group rented five vans from a local business for the 2018 midterm election and shuttled about 300 students.

He said there were more than 400 riders Tuesday, and while nearly all of them traveled to Ward 1, the vans took students to any Keene ward in which they were registered. Aside from the convenience of the ride, he argued that it also made voting a social experience to get excited about, rather than a chore to do alone between classes.

Back on campus, he said KSC Votes set up a festive atmosphere to celebrate the occasion. A candidate fair inside the student center featured campaign representatives and literature, and a truck near the shuttle pickup offered free tacos to passersby, regardless of whether they voted.

“We laugh a lot about it: No quid pro quo!” he chuckled.

From sending volunteers to the wards to setting up transport and giving guidance leading up to the elections, Gempler said the goal of KSC Votes is to rise above politics and to instead raise awareness about the process to encourage participation.

“That’s the kind of commonality that brings us together.”

After this article went to press, the city released revised figures for the number of registered voters in each ward. This article has been updated with the correct figure for Ward 1.