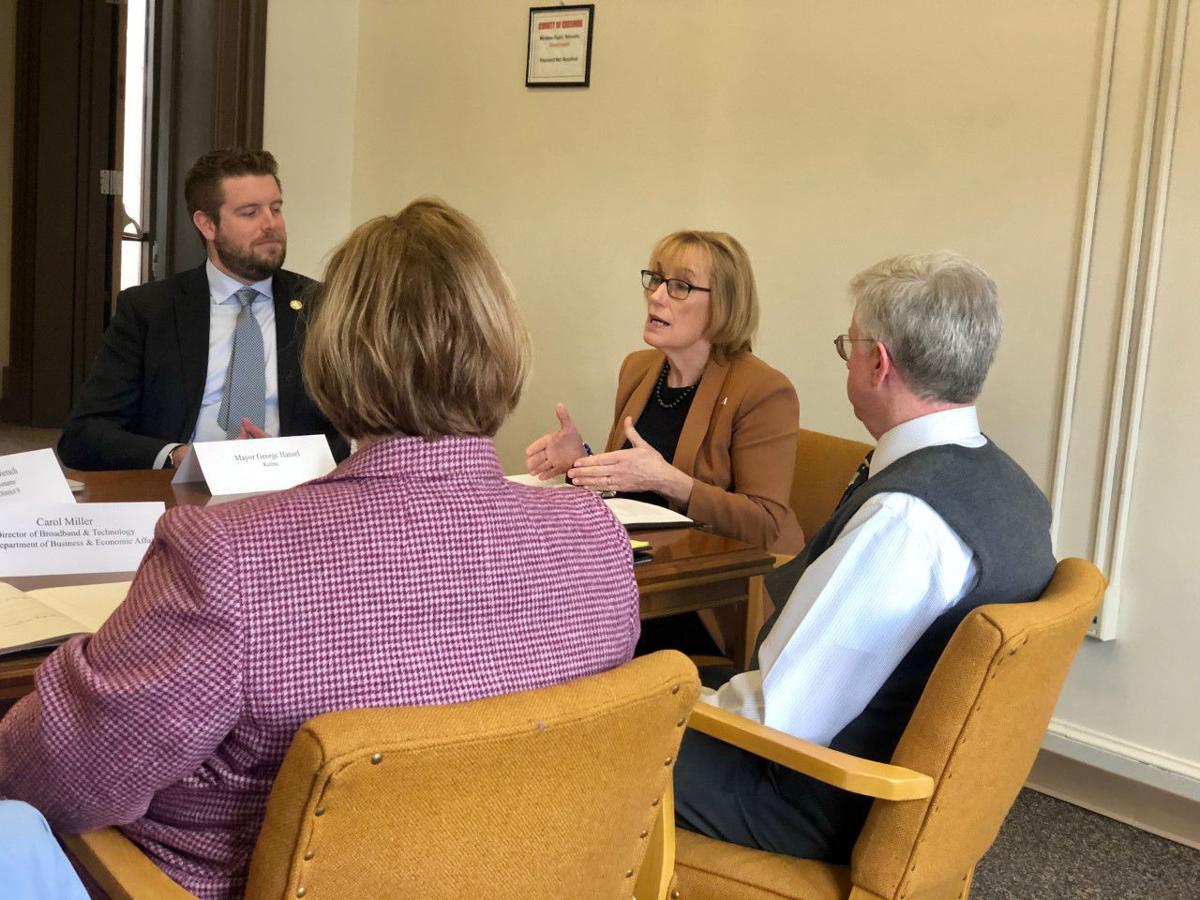 U.S. Sen. Maggie Hassan, D-N.H., talks about broadband-access issues in rural communities as part of a roundtable discussion Thursday at County Hall in Keene. To the left of Hassan is Keene Mayor George Hansel, while Tim Murphy, executive director of the Southwest Region Planning Commission, is seated at right. Sitting with her back to the camera is Carol Miller, the director of broadband technology for the N.H. Division of Economic Development. 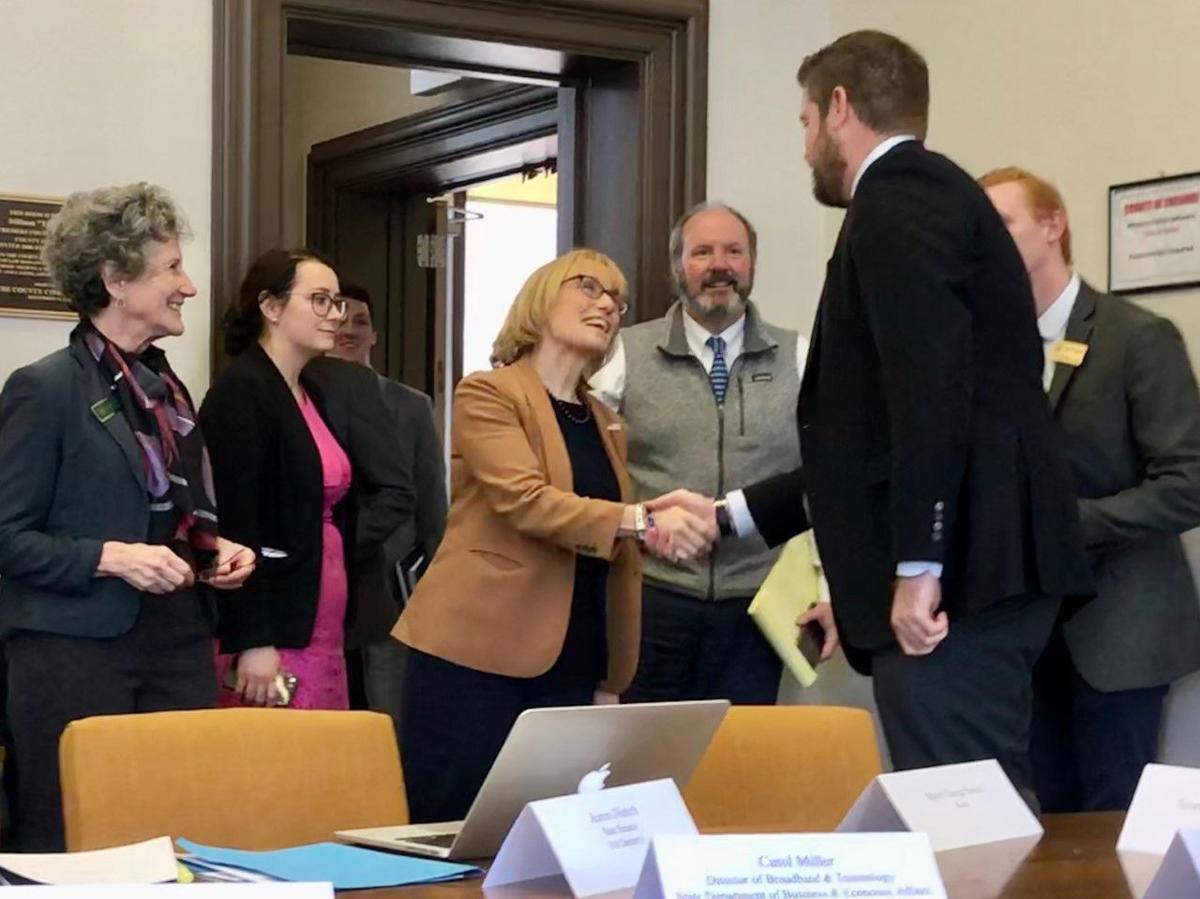 U.S. Sen. Maggie Hassan, D-N.H., talks about broadband-access issues in rural communities as part of a roundtable discussion Thursday at County Hall in Keene. To the left of Hassan is Keene Mayor George Hansel, while Tim Murphy, executive director of the Southwest Region Planning Commission, is seated at right. Sitting with her back to the camera is Carol Miller, the director of broadband technology for the N.H. Division of Economic Development.

At a roundtable discussion at Cheshire County Hall, Hassan, D-N.H., laid out some of her goals for helping area residents stay connected, which she said has become “essential.” She said rural access to broadband is an issue across the country that elected officials from all ends of the political spectrum are working to address.

“In every corner of our state, I talk to businesses and local communities about their priorities and challenges,” Hassan said. “And in every corner of our state, particularly here and up in the North Country, I hear about the limitations that our spotty access to high-speed broadband puts on us. We really can’t compete in the economy, nor can we participate in our democracy and our communities, without access to broadband.”

The senator said she teamed up with U.S. Sen. Shelley Moore Capito, R-W.Va., to introduce a pair of bills that would incentivize new investment in broadband infrastructure.

Hassan also said she wants to work with the Federal Communications Commission to “go back to the drawing board” and reassess the maps the commission uses to track which parts of the country have Internet access.

“The maps indicate coverage for both mobile broadband and also wired and satellite broadband in areas of the state that do not reflect reality,” she said. “I was literally sitting with the chair of the FCC going, ‘No, no, no. I drive there; there’s no coverage.’ ”

As towns across New Hampshire gear up for their annual town meetings, five municipalities in Cheshire County — Dublin, Harrisville, Rindge, Walpole and Westmoreland — will have broadband projects on their warrants, according to Cheshire County Administrator Chris Coates.

This comes on the heels of Chesterfield residents’ vote last year to partner with Consolidated Communications, an Illinois-based broadband provider, to bring high-speed Internet services throughout the town. The principal and interest on the bond are being paid for via an up-to-$10 monthly infrastructure fee added to subscribers’ bills and will not have an impact on the town’s tax rate.

Consolidated Communications is guaranteeing a $1.8 million bond over 20 years and contributing about $2.5 million to build a full fiber-optic network with speeds up to 1 Gbps, former Chesterfield Selectman Brad Roscoe said back in January 2019.

Chesterfield was the first town in the state to take advantage of 2018’s Senate Bill 170 — sponsored by N.H. Sen. Jay Kahn and Rep. John Bordenet of Keene — which allows local governments to issue bonds to fund broadband infrastructure in areas without reliable access.

According to Ellen Scarponi, director of government relations in New Hampshire for Consolidated Communications, the Chesterfield project is working well. She said the company is now working with seven area towns and added that another 40 have expressed interest in getting involved in projects similar to Chesterfield’s.

Brian Foucher, president of WiValley, a small local Internet provider, noted that some of Hassan’s proposals for tax credits to help spur infrastructure investment may help larger providers, but for a business of his size, would likely be less beneficial. He said he’s had to focus his company’s resources on states that have been more supportive of broadband projects.

“Right now, we’ve taken all of our efforts out of New Hampshire, and we’re working in Massachusetts,” Foucher said. “Because the state’s funding us to build complete towns.”

Roundtable panelists also discussed the lack of competition in the local Internet market, and Hassan said it was helpful to hear the concerns of smaller providers.

Government officials and representatives of the communications industry weren’t the only ones invited to participate in Thursday’s discussion. Also on hand were people who work in health care and education.

Robb Malay, superintendent of N.H. School Administrative Unit 29 — which includes Keene and other area school districts —said Internet equity among students when they’re not at school is a concern. Those who do not have Internet access may have fewer educational options, like participating in virtual learning opportunities, than those who do.

“The K-12 world has changed so drastically ... where we are utilizing more virtual [technology] ... learning opportunities where students are communicating with their teacher and submitting their work in a way that has never been imagined before,” Malay said. “When they’re not at the school, it makes it very difficult for them to do those types of functions.”

Similarly, Dr. Don Caruso, president and CEO of Cheshire Medical Center, said advances in medical technology have made it possible to provide more comprehensive medical care, but high-speed Internet is required to take advantage of those services.

He said the hospital has had issues with recruitment, as physicians have had difficulty staying connected to the hospital when they aren’t there, and patients who want to utilize telemedicine services are unable to connect with their doctors.

“Physicians who come to the community, they can’t connect back to the hospital,” Caruso said. “... In terms of access itself, it really is going to move to a world in rural areas where we need more telemedicine. Telemedicine ... we do a lot of at Keene, but really it’s hospital-centric; it’s got to rapidly get out to the public. That can’t happen without broadband.”

This article has been altered to correct a point about S.2866.

Mia Summerson can be reached at 352-1234, extension 1435, or msummerson@keenesentinel.com.