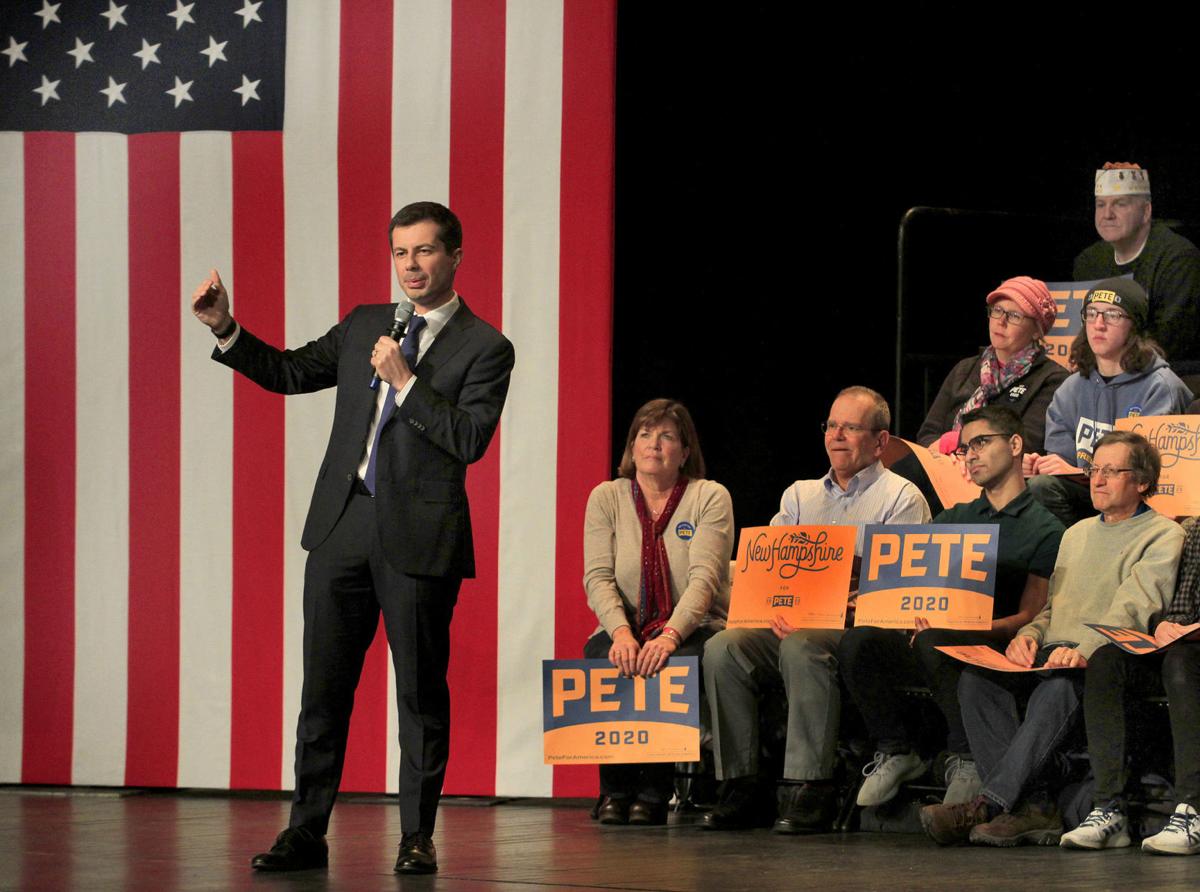 Democratic presidential candidate Pete Buttigieg drew more than 850 people to a rally at The Colonial Theatre in Keene Jan. 2. 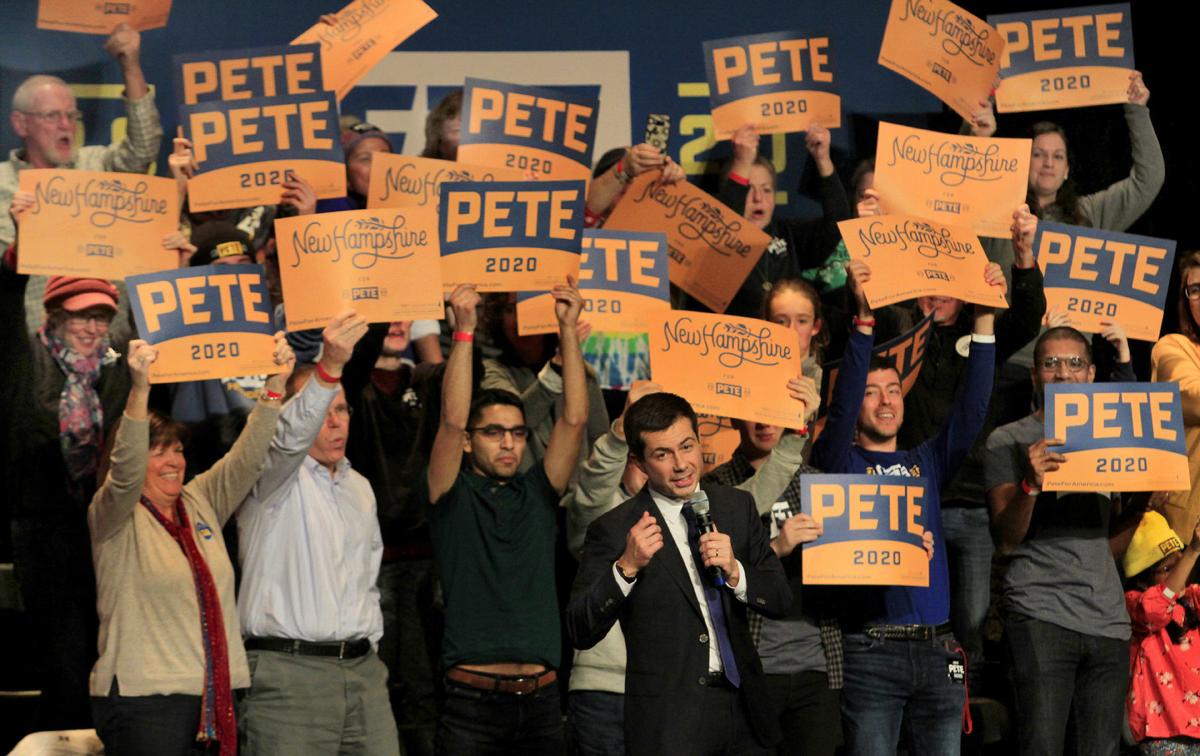 Democratic presidential candidate Pete Buttigieg, the former mayor of South Bend, Ind., has the support of the people behind him on The Colonial Theater stage at a rally in Keene Thursday night. 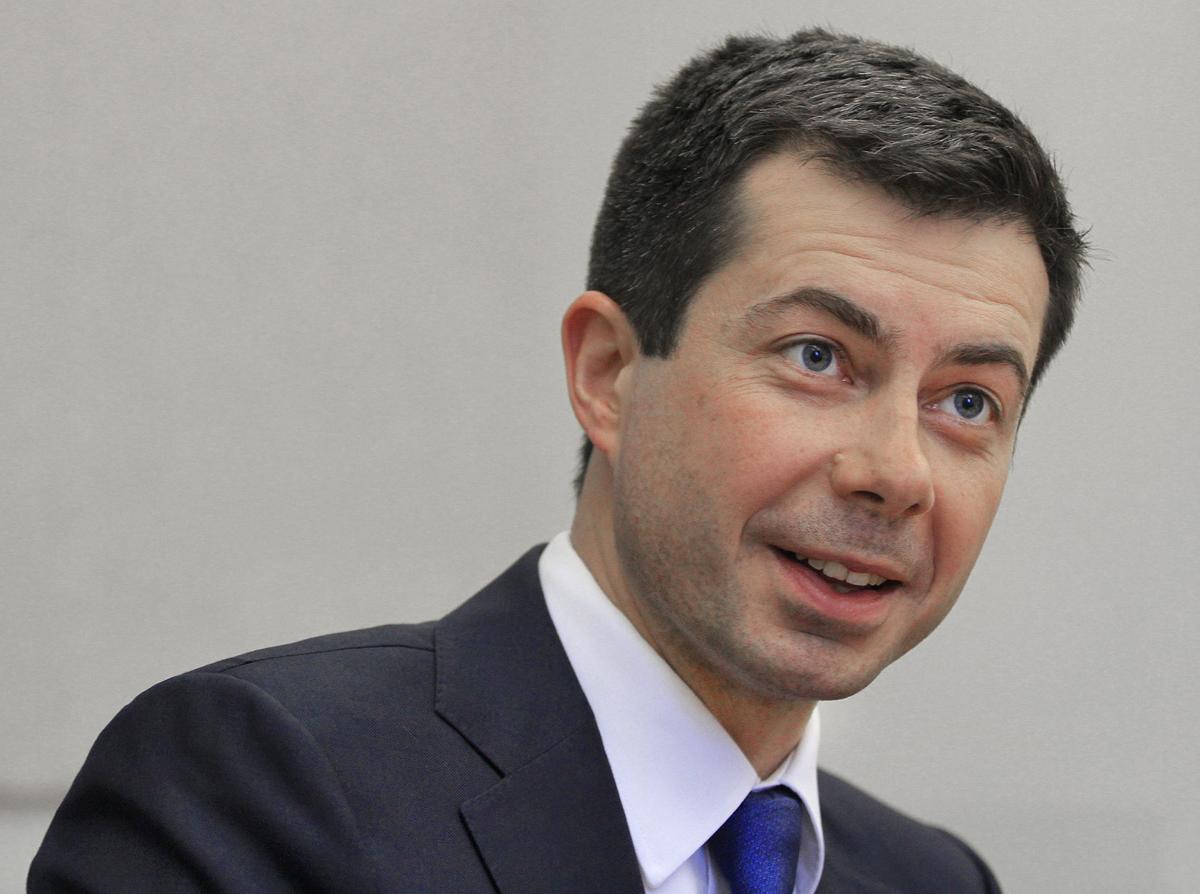 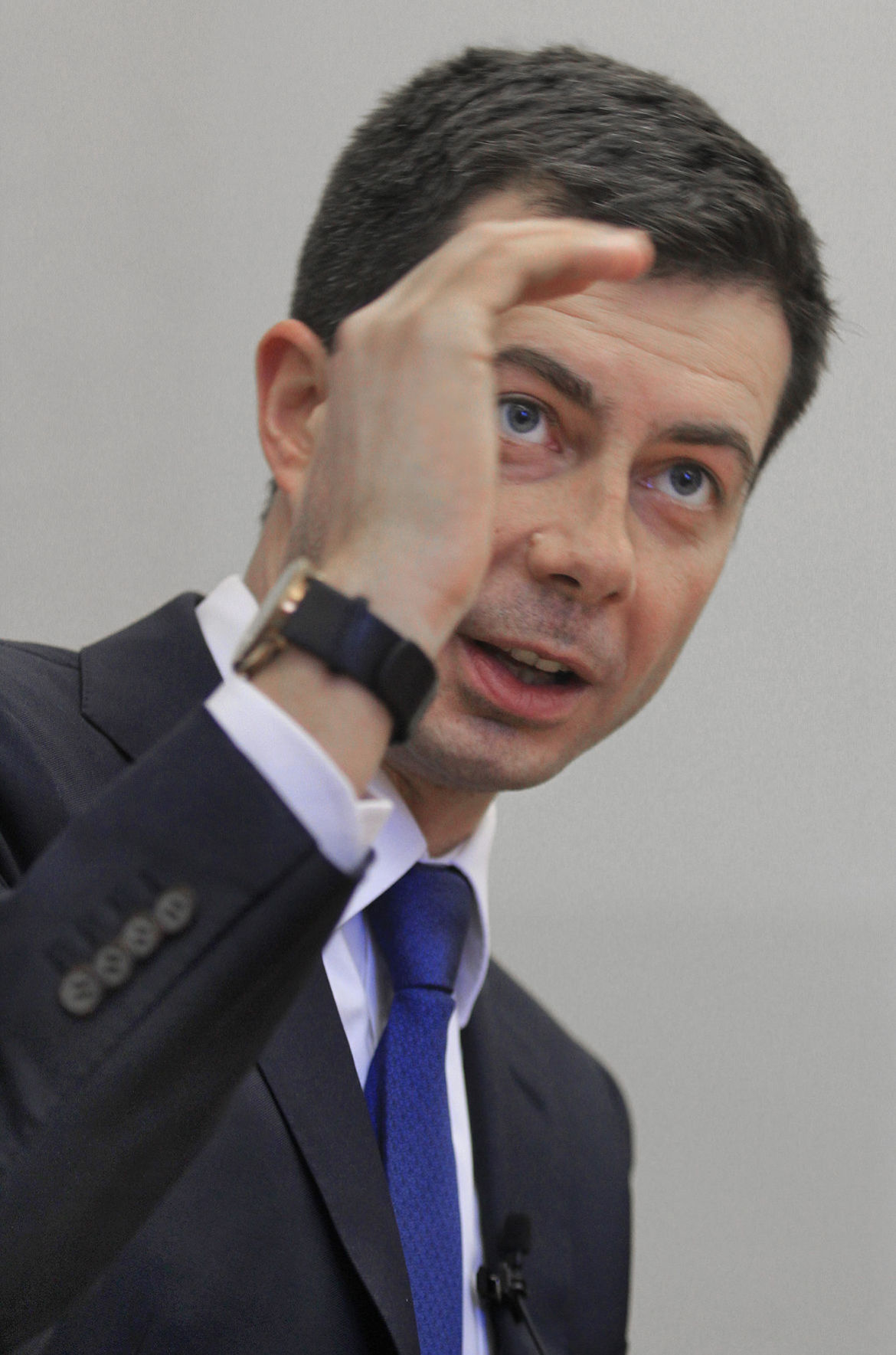 Democratic presidential candidate Pete Buttigieg drew more than 850 people to a rally at The Colonial Theatre in Keene Jan. 2.

Democratic presidential candidate Pete Buttigieg, the former mayor of South Bend, Ind., has the support of the people behind him on The Colonial Theater stage at a rally in Keene Thursday night.

Less than 48 hours into his new life as the former mayor of South Bend, Ind., Pete Buttigieg kicked off his latest Granite State swing in Keene Thursday with a rare suit covering his normally rolled-up sleeves.

His biggest local rally yet came in an effort to prove he’s capable not just of winning the Democratic nomination, but of governing effectively as the 46th president of the United States.

Before a crowd of more than 850 at The Colonial Theatre, he continued firing up supporters, several of whom said they’ve gone from favoring him to thinking he could actually win.

Buttigieg, 37 — who hit his two-term limit as mayor with the start of 2020 — told The Sentinel’s editorial board earlier Thursday that, despite South Bend being only the fourth largest city in Indiana with a population of just over 100,000, his eight years at the helm have given him the kind of hands-on executive experience Washington needs more of.

“There’s a difference between electing a public servant from middle America and electing a disgraced reality TV show host, for sure,” Buttigieg said in comparing his lack of political experience to Donald Trump’s.

“... And I would argue especially from a city that is not one of the biggest cities in America,” Buttigieg continued. “In other words, we’ve got a president who claims to, pretends to speak for communities like mine: lower-income, industrial, working-class communities. And it’s time for a voice that actually comes from the experience of shaping and guiding one of those communities to be in Washington.”

Buttigieg also touted his service as a Navy intelligence officer in Afghanistan and said that while military service is not a prerequisite for the presidency, “it can’t hurt.”

Both in front of the editorial board and the hundreds gathered in the nearly 100-year-old theater, Buttigieg also underscored a common denominator among Democrats who have taken to the White House in modern history.

Going back to John F. Kennedy, Jimmy Carter, Bill Clinton and Barack Obama, Buttigieg said he has some of the same traits that got those Democrats elected.

“The candidate has been new on the national scene and had not run for president before, either did not work in Washington or hadn’t for very long, was running a values-based campaign that called the country to higher values and represented a newer generation of leadership,” Buttigieg said. “You add to that the fact that Americans almost always choose, in terms of style, the opposite of whatever we’ve just had in the Oval Office, I think I have something to offer in that regard.”

On the substance of his policy plans, Buttigieg said his “mayor’s-eye view” would follow a general principle of giving states more control of how to spend on things like infrastructure, addiction treatment and expanding broadband access, but that the federal government needs to step up its level of funding.

He also touted a pragmatic approach to issues like health care, contrasting his $1.5 trillion “Medicare For All Who Want It” framework with those from opponents like U.S. Sens. Bernie Sanders of Vermont and Elizabeth Warren of Massachusetts, which exceed $20 trillion over the same estimated 10-year period.

“So anytime you set up a new insurance pool, you have to think about the risk management,” Buttigieg said. “... Part of what I do call for is retroactive enrollment of anybody who’s uninsured ... and you add to that the economies of scale and purchasing power of a national program, you add the better outcomes of ensuring that nobody is uninsured, which means more preventative care, you add to that the no-brainer moves like Medicare being able to negotiate [prescription drug prices], and I think the real question is whether the private plans will be able to compete [with the new public option].”

As the only millennial in the race other than Hawaii Congresswoman Tulsi Gabbard, Buttigieg said issues he will likely have to deal with for decades to come, such as climate change, are becoming “an issue of generational justice.”

He said he would seek to modernize military spending in realms such as artificial intelligence, calling Trump’s spending priorities on building a border wall — which reportedly involved aides seeking a cost estimate for alligator- or snake-filled moats — “a 17th-century imagination when it comes to security and technology.” (Trump denied the report, which was part of an article The New York Times said was informed by interviews with more than a dozen officials in his administration and the White House.)

Another military change Buttigieg said he hopes to make is repealing the congressional authorization for the use of force going back to Sept. 14, 2001, and replacing it with a three-year sunset clause so that the American public would be able to weigh in on members of Congress supporting war efforts.

Buttigieg said the ultimate goal of his presidency, should he win the nomination and defeat Trump, would be to use the bully pulpit and policy to unite the country and restore America’s relationship with its allies.

Outside The Colonial, after Buttigieg gave a 15-minute stump speech, answered audience questions and rolled out some of his biggest local endorsements on stage — featuring state Rep. David Morrill, D-Keene; Keene City Councilor Randy L. Filiault; and Cheshire County Sheriff Eliezer “Eli” Rivera — several Buttigieg supporters said they are beginning to feel like they could be part of a winning effort.

“You can just feel the energy is exciting,” Fran Denis, a business analyst from Chesterfield said. “It’s so different to when I first saw him in Hancock [in August].

“You know, we were getting to know him,” Denis, 52, continued. “Then, he was Pete the candidate. Now, he’s Pete the presidential candidate — oh my God.”

Among her friends and after a hearty discussion on Buttigieg’s electability over Thanksgiving dinner, Denis said she’s observed that his biggest opponents are Sanders and former Vice President Joe Biden, both septuagenarians with longstanding relationships to their voters.

However, Denis said she thinks Buttigieg’s military background and his command of the issues will continue to win more people over as the primary approaches.

Cindy Letendre, a patient data coordinator from Keene who hadn’t seen Buttigieg in person before, said she was surprised by how authentically his personality came across compared to when he’s on television.

“This gave me the opportunity to see that he can do it on the fly,” Letendre, 59, said, adding she was particularly impressed with how he handled questions from the audience.

Letendre said she convinced her husband, an independent Trump supporter, to pull the lever for Buttigieg on Feb. 11 in New Hampshire’s Democratic primary.

Some fellow Hoosiers even turned up at The Colonial, with Jane and Charles Olomis in town from Columbia City, Ind., visiting family.

They said they were happy to see how well Buttigieg was received, and were impressed with how well organized the event was.

Charles predicted a solid performance in New Hampshire could bode well for Buttigieg if his Midwestern appeal continues to gain traction in the Granite State.

“He seems normal to us,” he said, “but I think his message travels well.”

This article has been changed to correct the spelling of Fran Denis' name and a statement that was incorrectly attributed to her.

An hour with Pete Buttigieg