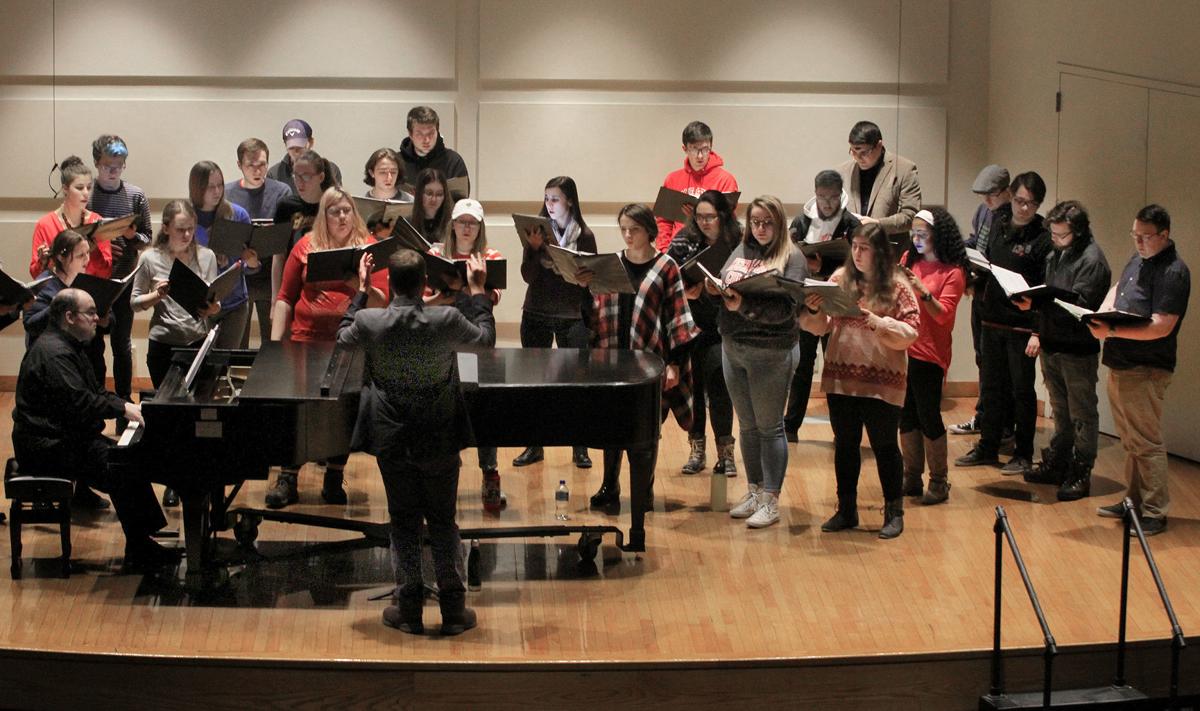 Keene State College Concert Choir during a recent rehearsal in the Redfern Arts Center, under the direction of Matthew Leese. 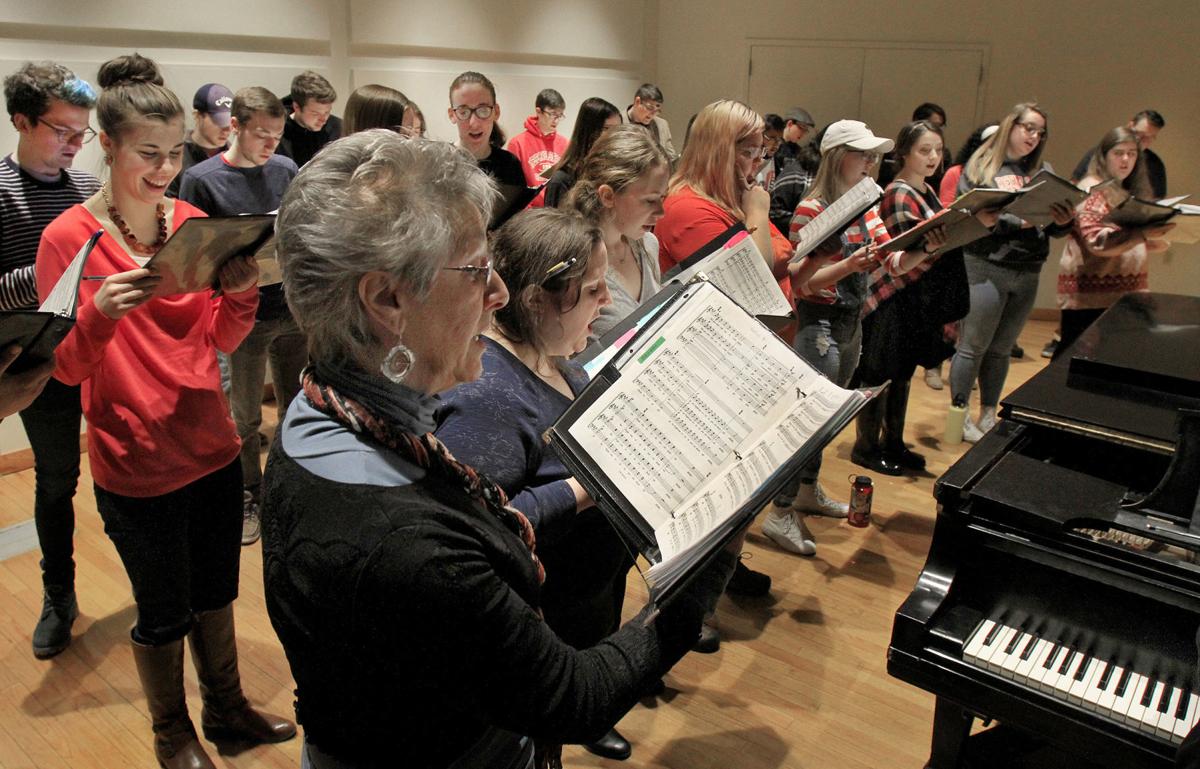 The Keene State College Concert Choir is seen during a recent rehearsal in the Redfern Arts Center under the direction of Matthew Leese.

Keene State College Concert Choir during a recent rehearsal in the Redfern Arts Center, under the direction of Matthew Leese.

The Keene State College Concert Choir is seen during a recent rehearsal in the Redfern Arts Center under the direction of Matthew Leese.

When Danielle St. Amand graduated from Keene State College with a degree in music education in 2017, she knew she wanted to stay in the area.

The Connecticut native began applying to teaching jobs in the Twin States, knowing that starting the job hunt right out of college can be stressful on any career path.

But St. Amand was armed with a reassuring statistic: Her degree program reports a 100-percent placement rate for graduates in employment or continuing education in the field.

“I actually didn’t believe it at first. I thought, ‘There’s no way it’s 100 percent,’ ” St. Amand said. “But everyone that I know that has graduated has found jobs — so it must be true.”

And it was true for St. Amand, too. Within a few months of graduating, she was employed at Westminster Center School in Vermont, teaching general music, band and choir to children in pre-kindergarten through 6th grade.

Sandra Howard, associate professor of music and coordinator for the music education program at Keene State, began tracking students’ graduate placement in 2009. Since then, she said, 100 percent of the college’s music education alumni reported starting a career in the field – either in education or in performance – or entering a graduate program within one year of completing their degree.

That’s partly thanks to the program’s relationships with professional associations for music educators, she said, as well as with schools in Vermont, New Hampshire and Massachusetts where music education majors do their student teaching.

“We’re in a really unique spot geographically that we can send students to any of these three states to do their field placements,” Howard said. “I would say those partnerships with the professionals in the field are a huge part of why our students are having a successful experience.”

St. Amand also credits the program’s personalized approach to helping students prepare for life after graduation. During her final semester at Keene State — her student-teaching semester — professors worked with her one on one to write a résumé and create an online portfolio, she said, which made her feel much more prepared for the job search. And she said faculty also went out of their way to share job opportunities with students.

The program’s small, conservatory-style model is part of what allows professors to build those relationships with students, according to Howard. And, she noted, the college offers an advantage over larger programs in that undergraduates have more opportunities to conduct or have their work performed on campus, making them more competitive for openings in the field.

“We don’t have graduate students here at Keene State in the music department, so a lot of our undergrads are getting experiences here that they would not be eligible for at an institution that offered masters and doctorates,” Howard said.

“... Music isn’t one of the areas that people generally think of as an area that focuses on job placement after graduation, but music education specifically really does,” Gilligan said. “Because we train students, and they’re certified by the time they get out, they’re highly sought after in getting their jobs.”

Across majors, Keene State’s graduate placement appears to be high as well. For a survey of the class of 2017, 98 percent of respondents reported finding employment or entering a graduate program within one year of receiving a degree, but the data aren’t broken out by department.

The college enrolled 3,569 students this school year, including undergraduates, graduate students and continuing education students, according to the Keene State Factbook.

Gilligan noted that a major factor underlying music students’ success is the department’s national accreditation from the National Association of Schools of Music — which requires that the program uphold a high level of academic rigor and maintain best practices in the field.

“Accreditation can give a school a good reputation so that they can be recognized, which makes the students more competitive,” Gilligan said. “But I think the deeper effect of that is that we have standards that we are required to keep.”

Keene State is one of only two institutions in New Hampshire and a handful across New England to earn the accreditation, according to the association’s website.

That distinction — along with the music education program’s high graduate placement rate — has prompted the college to begin more actively promoting the music department to prospective students and the wider community, according to Keene State President Melinda Treadwell.

Treadwell, who took over as interim president in summer 2017 and dropped the interim from her title in October, said one of her current priorities is addressing the program’s equipment and facility needs.

In September, Keene State joined the Steinway & Sons Festival Replacement Program — which loans pianos used at major music festivals to conservatories, colleges and universities during the festival off-season — as the first step in earning the “All-Steinway School” designation.

This fall, 18 state-of-the-art pianos were delivered to the campus, and Keene State will purchase 20 percent of the fleet each year until all of the once-loaned pianos are owned by the college, Gilligan said in September. Keene State has also launched an “All Steinway, All Together” fundraising initiative to help support that process, Treadwell noted.

“The (All-Steinway) commitment is a way for me to try to demonstrate very visibly through this partnership and through this fundraising effort that we are committed to the performing arts,” Treadwell said. “And music is our first program that we’re going to highlight in this multi-year effort.”

Several years down the road, that effort could include a new visual and performing arts center on campus, Treadwell said. With the All-Steinway fundraising initiative, she said she’s testing the waters for a potential capital campaign if the community shows interest in supporting a new facility.

It’s part of a push to emphasize Keene State’s role as a cultural hub for the region, she noted.

“We are drawing students from all over the Northeast, we have programs that we know, through our national accreditation, are unrivaled, and yet our facilities aren’t keeping up with current state needs,” Treadwell said.

While the college’s current facility, the Redfern Performing Arts Center, has a lot to offer — such as great acoustics — it also leaves something to be desired, Gilligan said. She pointed to a lack of adequate classroom space for the department’s course offerings, as well as issues with soundproofing and regulating humidity in the building.

And though the department already considers itself a regional cultural hub, Gilligan said updated facilities would allow the college to have a more active role in annual festivals and other arts initiatives throughout the area.

“There are so many things that are going on, and in some cases, we could really be part of that if we had a facility to offer to guest artists who are around,” Gilligan said. “We could collaborate, we could have some of these programs housed here or visit here and work with our students.”

In the meantime, Gilligan said she’s heartened to see the college investing in the music program and singing its praises in the local community. She noted that the department presents more than 80 events, such as concerts and guest lectures, per year — giving area residents plenty to enjoy.

“We’ve always had this to offer in the Monadnock Region, and I think that the college is putting out more effort to make that be known,” Gilligan said. “... I think people are kind of hungry for better cultural options, and we do have that. So we really want people to know that and be able to take advantage of it.”

This article has been updated to clarify that the music education program‘s placement rate refers to students finding jobs in music education, starting performance careers or entering graduate school.