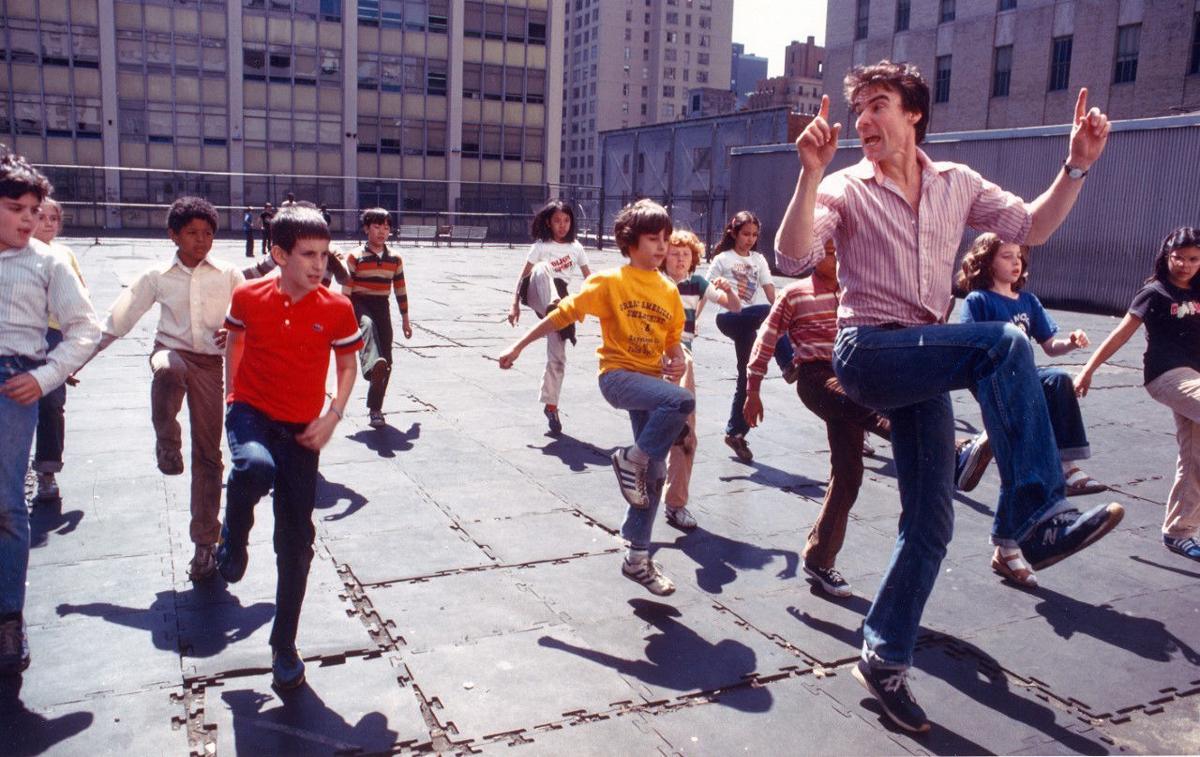 “He didn’t come on like a professional ballet dancer. He came on by saying, ‘Let me show you what fun we can have dancing,’ “ former Marlborough School principal Sandra Whippie said of Jacques d’Amboise, shown here with National Dance Institute students. 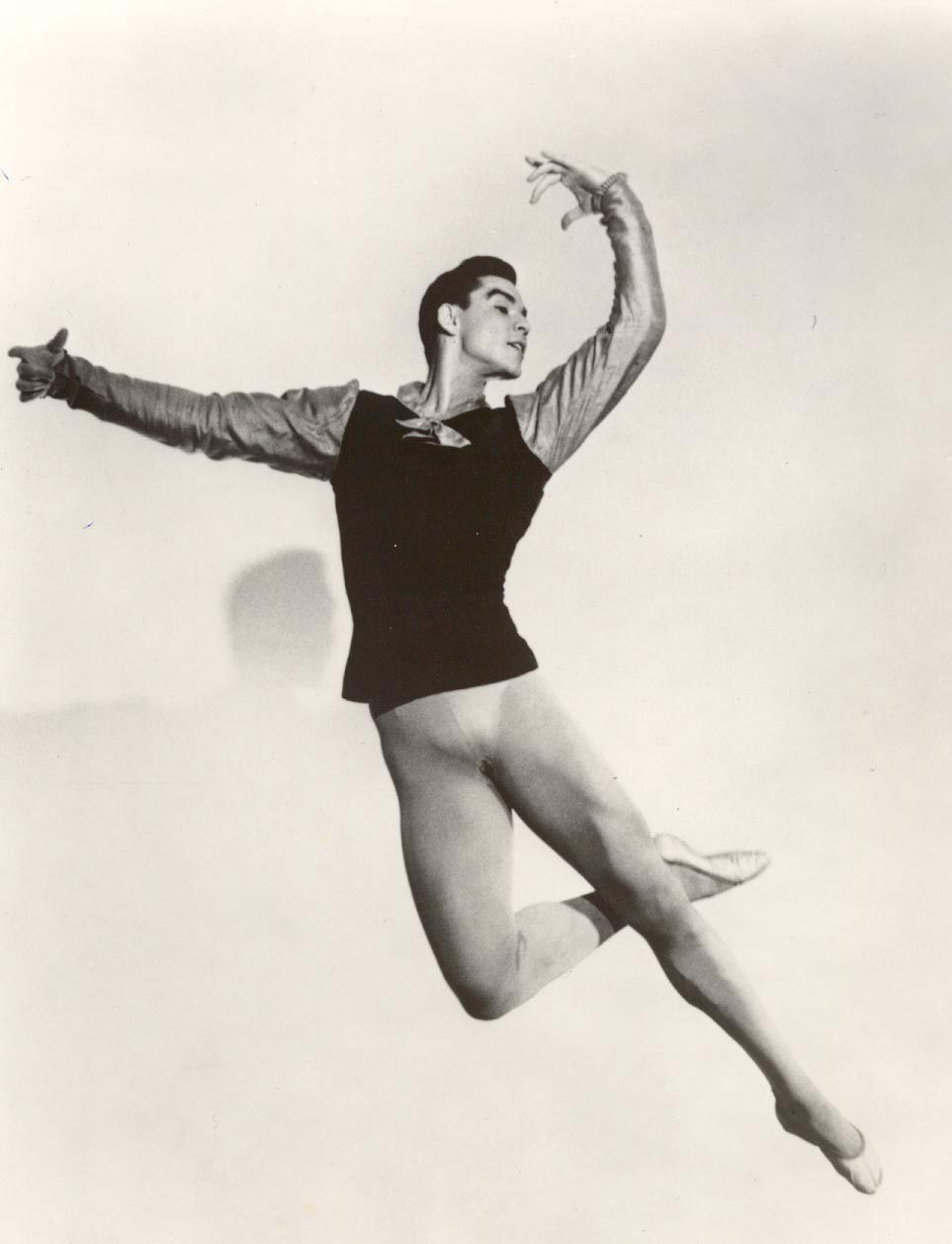 Jacques d’Amboise in his earlier years, when he danced with the New York City Ballet. 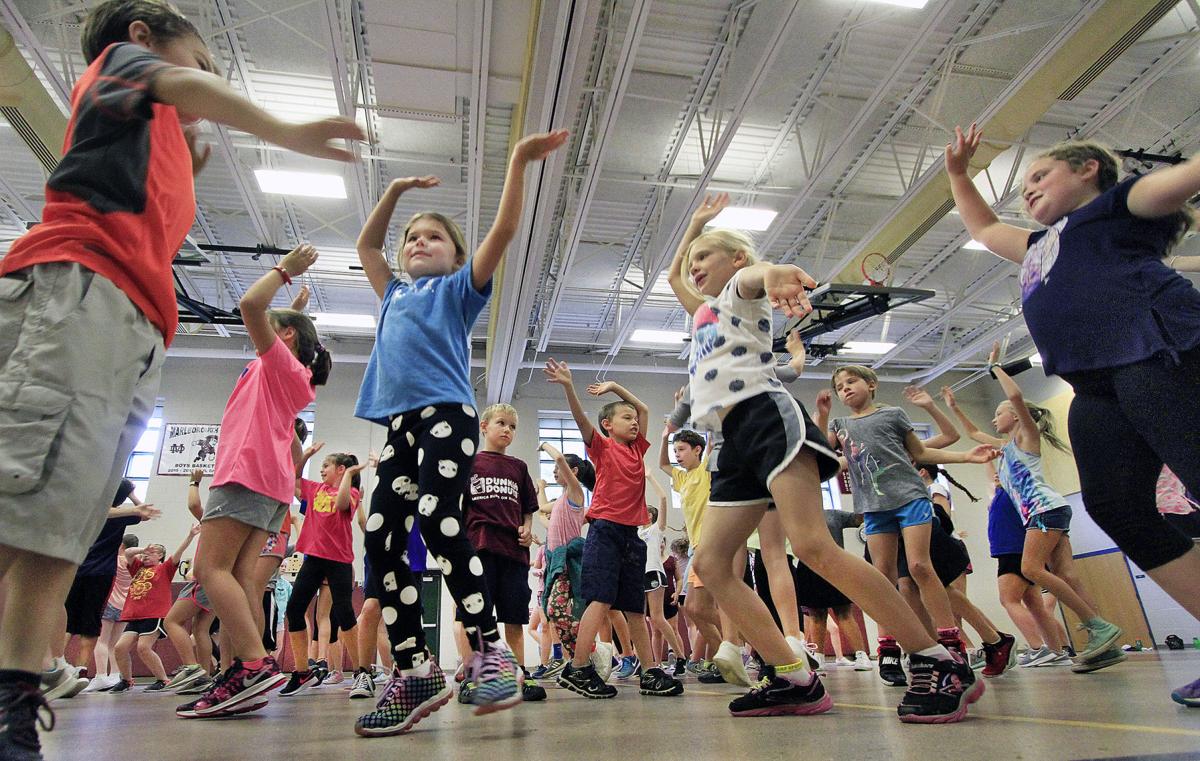 N.H. Dance Institute students rehearse at the Marlborough School for an upcoming performance in this file photo from the summer of 2018. 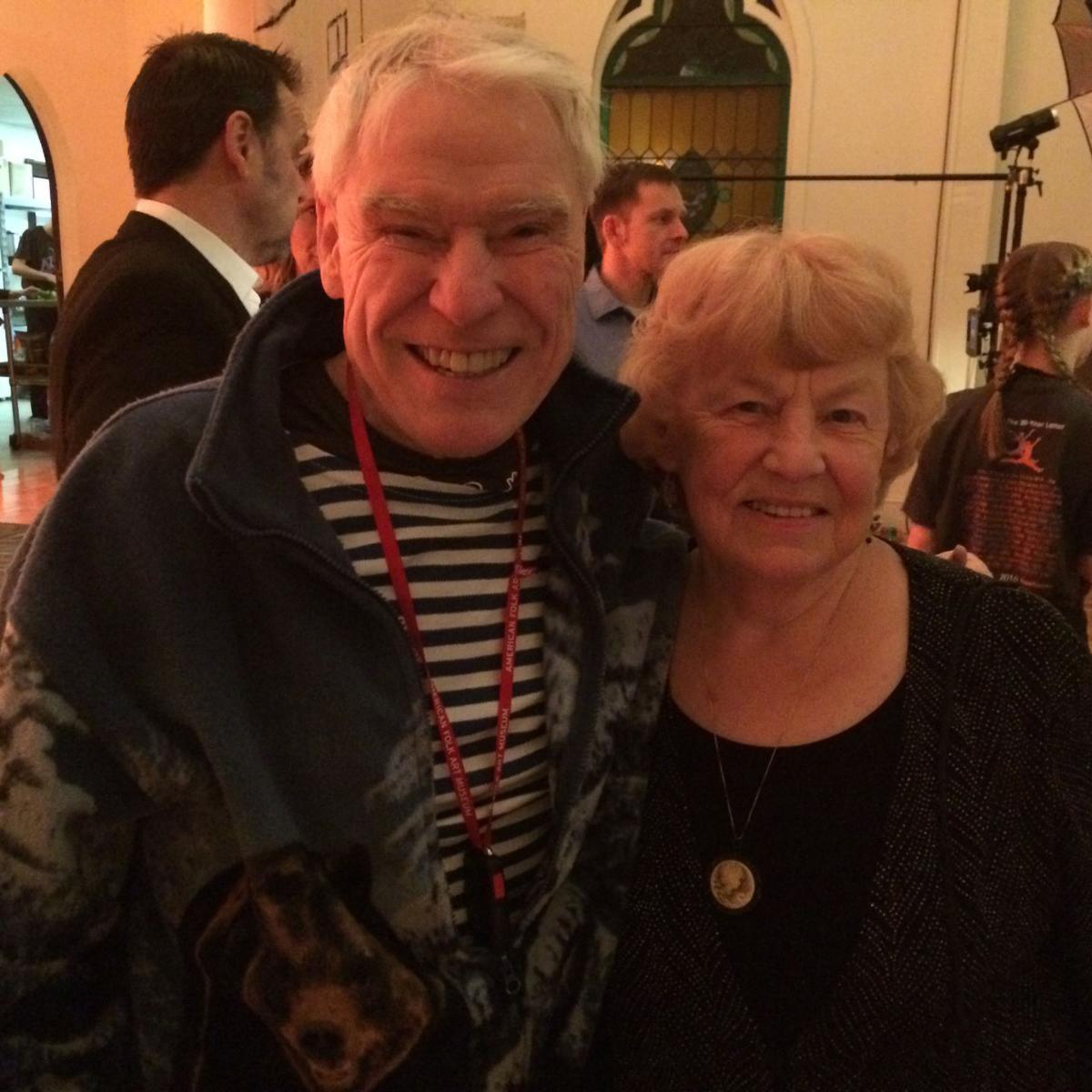 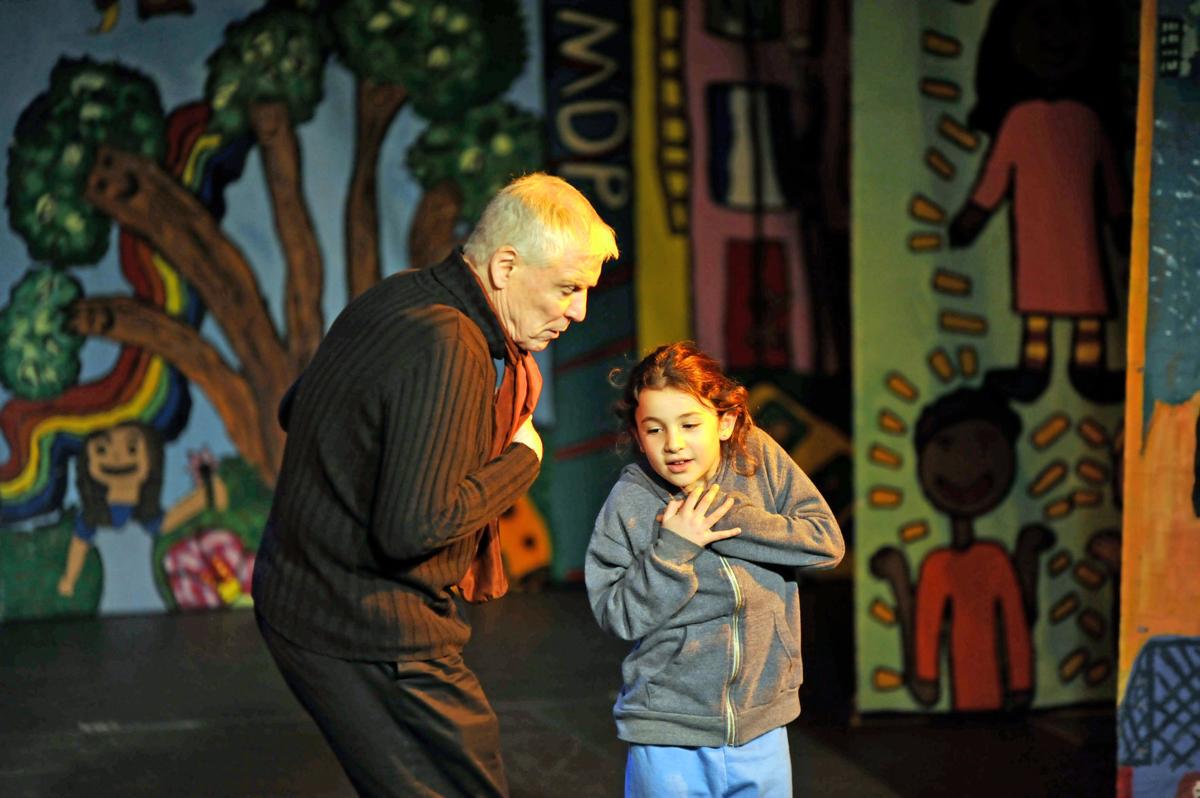 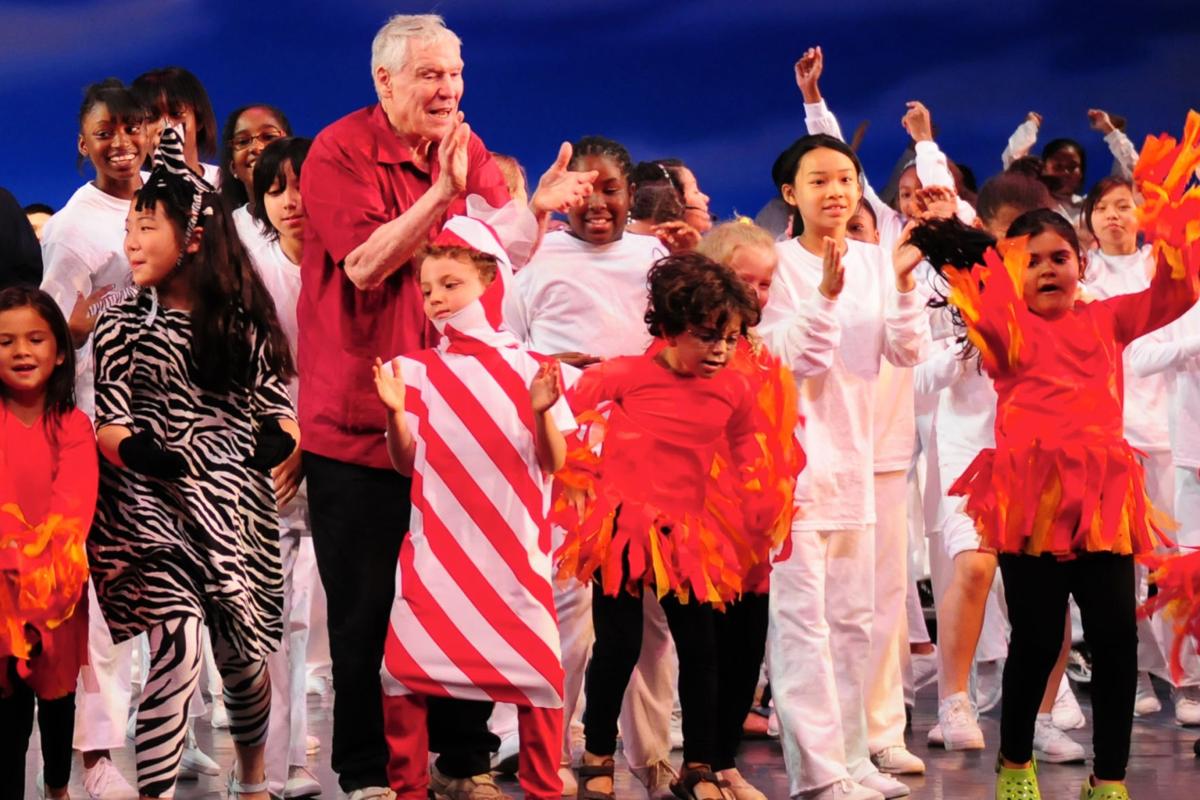 “He didn’t come on like a professional ballet dancer. He came on by saying, ‘Let me show you what fun we can have dancing,’ “ former Marlborough School principal Sandra Whippie said of Jacques d’Amboise, shown here with National Dance Institute students.

Jacques d’Amboise in his earlier years, when he danced with the New York City Ballet.

N.H. Dance Institute students rehearse at the Marlborough School for an upcoming performance in this file photo from the summer of 2018.

When more than 100 students from across the region take the Redfern Arts Center stage at Keene Stage College next month for the N.H. Dance Institute’s Event of the Year, they will join thousands who have performed in the annual show over the past 35 years.

Together, that group is only a small fraction of the children impacted by the legendary ballet dancer Jacques d’Amboise, who died May 2 due to complications from a stroke.

Despite his broad reach, local associates of d’Amboise say nearly every student in his National Dance Institute (NDI) — which he founded nearly five decades ago and which launched the Keene-based dance institute — felt his brilliance.

D’Amboise became a star at New York City Ballet in the mid-20th century, finding particular fame as the titular role in choreographer George Balanchine’s “Apollo.” He is credited with shattering stereotypes of male dancers and popularizing ballet in America.

But his legacy exceeds his on-stage career. In 1976, d’Amboise created NDI, a New York-based nonprofit that teaches dance in public schools and aims to make classes available to all students, regardless of means or ability.

NDI has since helped start at least a dozen affiliate programs across the country — from Durham, N.C., to Santa Fe, N.M. — that serve more than 30,000 children annually, according to its website.

Through dance, the organization imparts lessons in attentiveness and creativity that are key to academic success, according to former Marlborough School principal Sandra Whippie, who helped bring NDI to the Monadnock Region.

Whippie, 85, of Keene, said she learned of d’Amboise from a 1980s television show featuring NDI classes in New York City. As an educator, she was taken by the ballet icon’s ability to incorporate those qualities into his dance instruction.

“I was just fascinated because his manner of dealing with the children was inspirational,” she said. “Although I have never had any formal dancing lessons … what I saw in him was unusual.”

Shortly thereafter, Whippie said she and two Keene residents — youth worker Mario Cossa and local arts promoter Erika Radich — traveled to a suburban Boston school where d’Amboise was leading a dance class. The Monadnock Region delegation pitched d’Amboise, who was developing plans to bring NDI to other cities at the time, on starting a program locally, according to Whippie.

“I think one was just outside of Boston, one was in the Los Angeles area,” she said. “These are big cities. And I was sitting there saying, ‘How ‘bout Keene, New Hampshire?’ ”

NDI didn’t come to the Elm City immediately, but Whippie organized a committee to raise interest among area schools and secure funding for a local program.

D’Amboise occasionally visited the area to lead classes, Whippie said, calling his teaching style “inspirational.” To eliminate any barriers to participating in NDI, she said he had everyone dance in sneakers.

“He didn’t come on like a professional ballet dancer. He came on by saying, ‘Let me show you what fun we can have dancing.’ … It [gave] them confidence in themselves.”

In 1990, the local NDI affiliate broke from d’Amboise’s national organization and became the independent N.H. Dance Institute (NHDI). NHDI classes are typically offered in more than 25 local elementary and middle schools, with sessions held during the school day, and often draw more than 3,000 children annually — though the institute has reduced its programming during the COVID-19 pandemic.

D’Amboise remained closely involved with NHDI, according to Whippie, who said he liked that its Event of the Year is held at such a distinguished venue as the Redfern. His influence on the dance institute is still evident, she said.

For instance, d’Amboise insisted that all rehearsals and performances be set to live music, rather than a recording, so that the accompanists could adjust to the needs of NHDI instructors and dancers without pause, Whippie said. That tradition remains today, despite challenges posed by the pandemic: While NHDI limited enrollment in its upcoming Event of the Year to observe social-distancing guidelines, the performance will still be accompanied by an orchestra positioned in an adjacent theater and amplified into the Redfern’s main stage.

The live-music requirement is among several d’Amboisian principles that NHDI Artistic Director Kristen Leach said she inherited from her predecessor, Wendy Dwyer, when she took that position in 2007.

“There are certain pieces of what Jacques’ vision was that she kind of handed me and said, ‘Don’t let these go,’ ” Leach, a Keene resident, said.

Those values also include telling a story with each performance, she said, explaining that d’Amboise had a deeply poetic instinct. (Titled “Rise Like A Phoenix,” the latest Event of the Year celebrates students’ resilience in navigating the pandemic and aims to inspire them to service.)

Leach said she also tries to reflect d’Amboise’s charisma as an instructor — which she said was on full display when he attended NHDI events, like its 30th anniversary gala in 2016 — and his talent for challenging students to reach the best of their abilities.

“Any chance he had an opportunity to teach, he’d just stop the room and kind of take it over,” she said. “… Even into his 80s, you were kind of starstruck in his presence. He was one of those people that made you feel like you were the only person in the room.”

Whippie said she was reminded of that radiance while reconnecting with d’Amboise about a decade ago, when he visited a Brattleboro bookstore to promote his 2011 autobiography, “I Was a Dancer.”

The ballet star — who was raised in New York City, where his French-Canadian mother, Georgiana, enrolled him in a ballet class to keep him occupied — greeted Whippie as an old friend, she said.

“He was not from an advantaged family, but he was inspired by dance,” she said. “He wanted to spread that enthusiasm for how it changed his life.”

For many students, the NHDI classes are simply a fun way to stay active, according to Whippie. But for others, she said, the program has inspired a lifelong appreciation for the performing arts and even launched some to illustrious dance careers.

“It helped children who didn’t know anything at all about professional ballet to realize that the arts are something beautiful in our lives.”