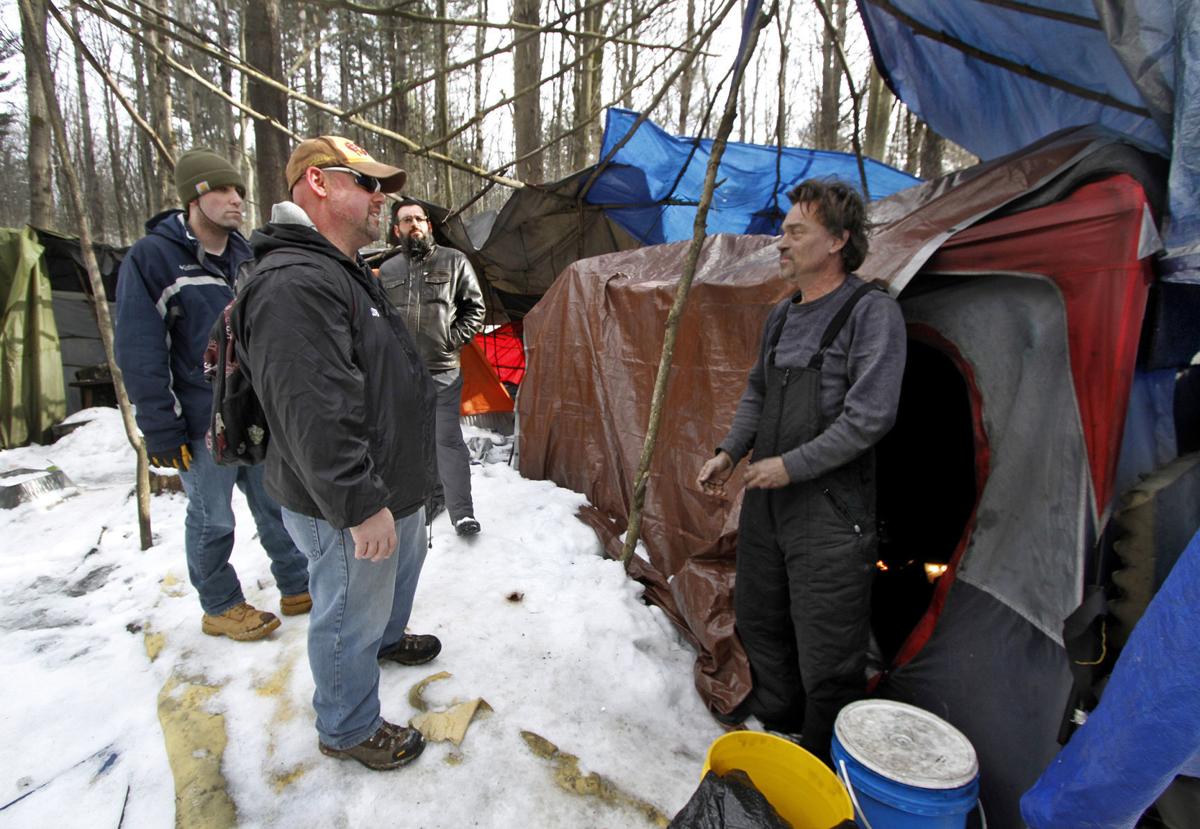 Rob Waters, second from left, who does outreach work for Southwestern Community Services, reaches out to homeless man, Pete, during a frigid spell in 2018. 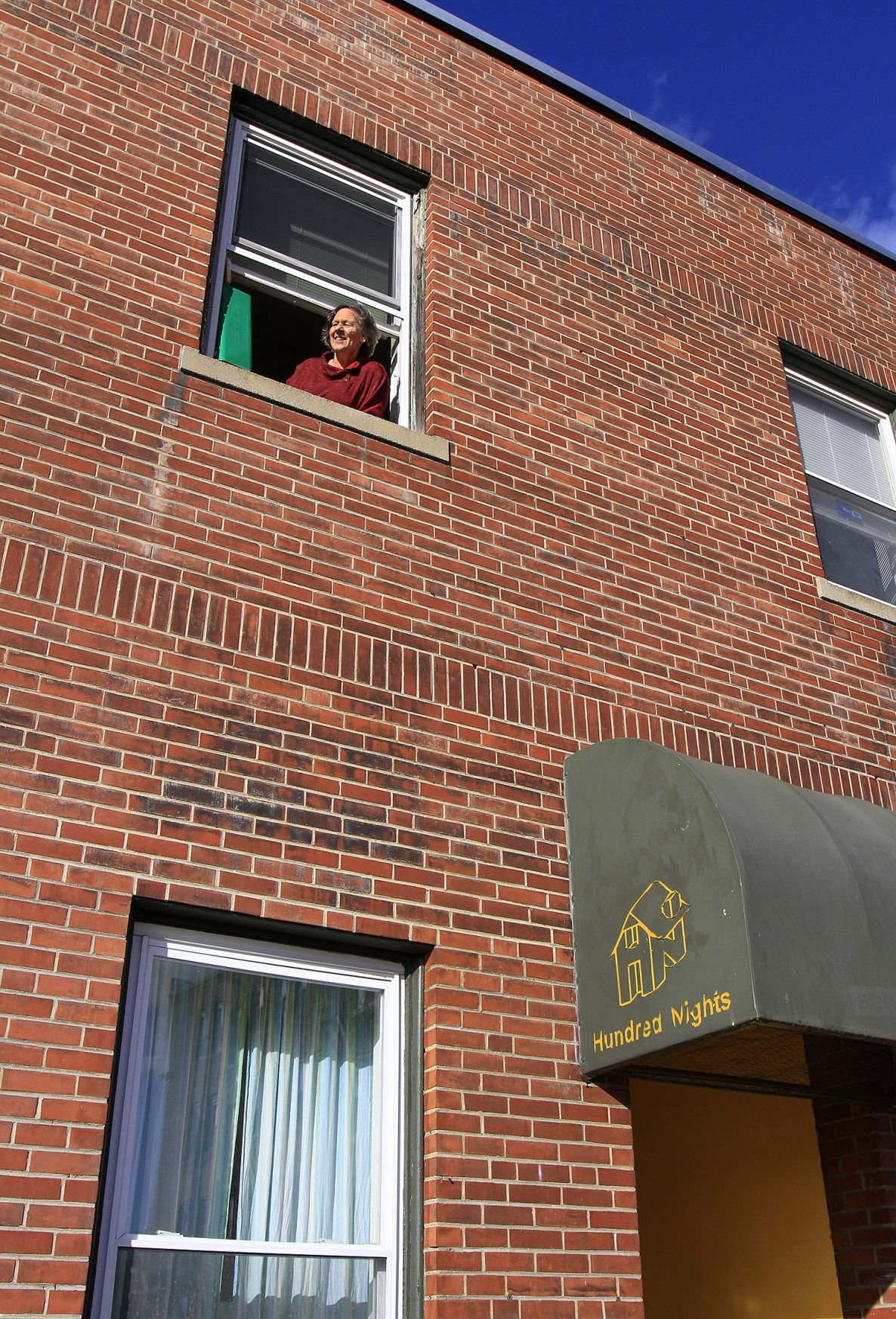 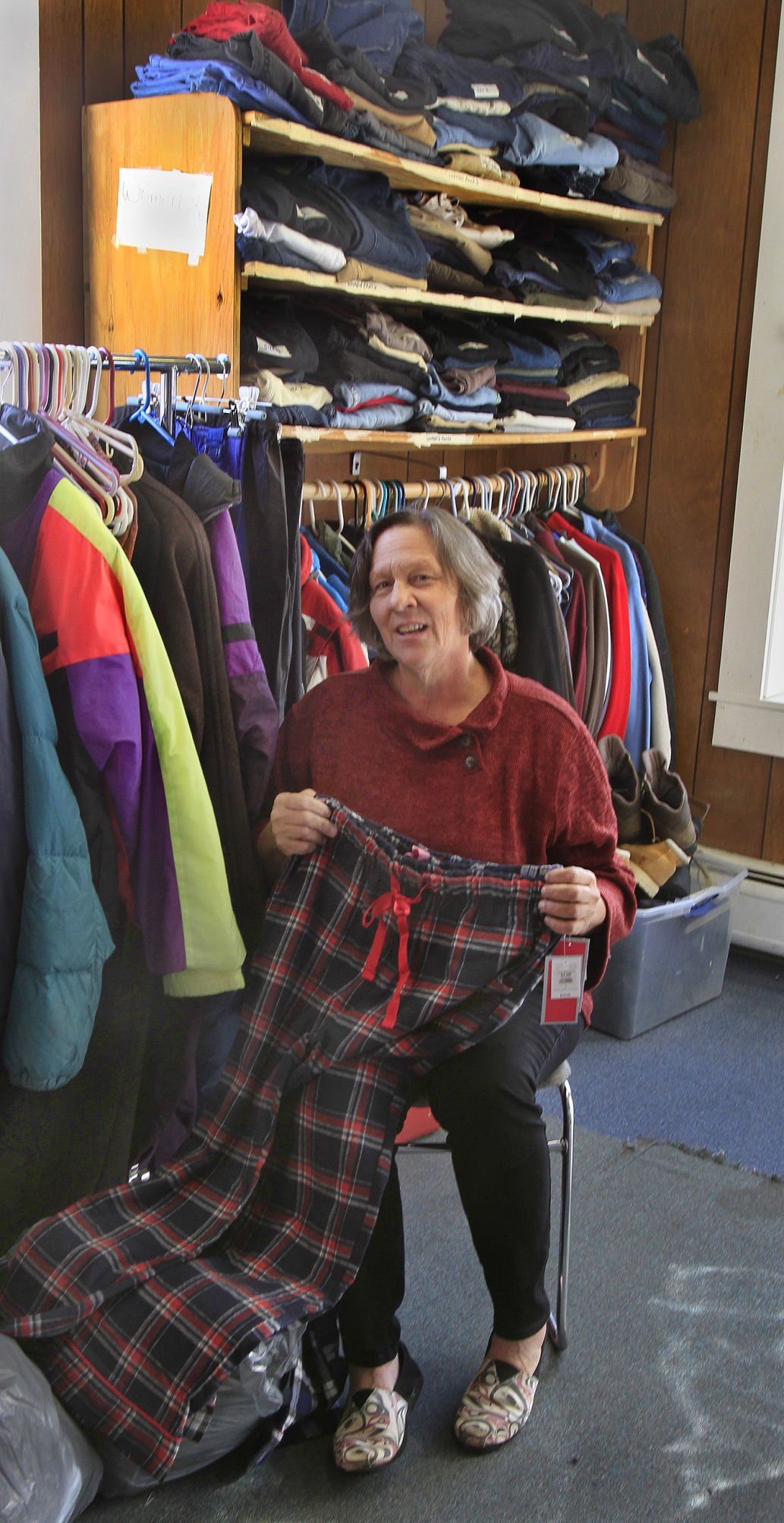 Mindy Cambiar, Director of Hundred Nights Shelter on Friday in the clothing room.

Rob Waters, second from left, who does outreach work for Southwestern Community Services, reaches out to homeless man, Pete, during a frigid spell in 2018.

Mindy Cambiar, Director of Hundred Nights Shelter on Friday in the clothing room.

With a cold-weather homeless shelter in Keene already nearly full ahead of its official opening for the winter, advocates are spreading the word that shelter space is “at a premium.” And as temperatures drop, they’re looking for creative solutions to a problem that persists year-round.

Hundred Nights Inc. on Lamson Street runs a resource center that’s open throughout the year, along with its cold-weather shelter — though the latter is leaning toward an all-season operation, too.

Despite its name, the shelter has historically stayed open each year for well over 100 nights, typically kicking off the winter sometime in November and wrapping up in March or April. In 2018, the shelter opened Nov. 12 and remained at or nearly at its 25-bed capacity all season, in addition to filling a dozen cots at a Keene church.

The shelter officially closed at the end of April, but Executive Director Melinda L. “Mindy” Cambiar said she planned for families to stay, as well as anyone too elderly or ill to live outside. About 10 to 12 people stayed there through May when, she said, she was approached by The Doorway at Cheshire Medical Center.

The Doorway is part of a statewide effort to create a “hub and spoke” system to screen, assess and refer people to addiction treatment and support services in the community. Cambiar said The Doorway’s director, Nelson Hayden, asked if Hundred Nights could house up to four guests per night.

Wait times for treatment facilities can be several days, Hayden explained. That can be a barrier to seeking help for people experiencing homelessness, who may not have somewhere to safely wait, so he contacted Cambiar and asked if three or four beds could be reserved for people waiting to get into treatment.

Cambiar agreed, and in exchange, Hundred Nights receives a monthly stipend for an overnight staff person to supervise the guests — something the shelter couldn’t otherwise afford in its off season.

The partnership is exciting, Cambiar noted, because it’s a major step toward becoming a year-round shelter.

“What’s making me a little nervous,” she said, “is that, you know, right now if we have 20 people here, it means we only have five beds available.”

For nearly three years, Hundred Nights has actively sought a less costly building with room for more beds. But the organization has struggled to overcome a major obstacle: Operating a homeless shelter isn’t allowed in Keene’s central business district without a zoning variance, and getting one has proven difficult.

Three people now at the shelter are slated to move out by Nov. 10 after securing housing, which will open up three more beds, and two more families could potentially get housing vouchers soon.

Cambiar regularly fields calls, though, for additional people who need help, especially families with children that need emergency shelter. Beds fill up fast, and the immediate concern is finding a way to get people inside once the weather turns cold.

Last year, when Cambiar tried to add cots to the downstairs resource center, she learned it has its own address and doesn’t have the proper license to have beds. As a temporary fix, people were allowed to congregate inside the resource center overnight to get out of the cold, but they couldn’t sleep there.

That wasn’t an ideal solution: Asking people to stay awake all night, Cambiar said, then expecting them to sleep during noisy daytime office hours, is difficult.

United Church of Christ in Keene acts as an overflow shelter with up to 12 beds each season, but this doesn’t open until after Christmas because of the church’s holiday events.

This year, Cambiar said, Hundred Nights board members are asking other area churches if they’d be willing to shelter a few people on cots, provided their buildings meet code enforcement standards.

“That’s where we’re at,” she said. “We need to figure out a way to keep people inside.”

The goal is a brief stay for everyone who comes in, he said, so the shelter managers help guests complete applications for assistance and get on waiting lists for subsidized housing.

Education is a major part of gearing up for the colder months, Waters explained, and that begins as soon as the snow melts. In his outreach efforts, he reminds people year-round how harsh the winter will be and encourages them to prepare sooner rather than later.

This year in particular, with Hundred Nights near capacity before its official opening, Waters said he’s trying to raise awareness that the Lamson Street shelter won’t necessarily be a sure bet when the temperatures drop.

“[We’re] trying to make sure that people are well educated that shelter space is at a premium, and it has been for a long time but even more so now,” he said.

Waters said he can’t say with certainty what’s put a strain on the shelters this year, though he pointed out the low vacancy rates for rental housing locally.

Cambiar noted she’s received many calls from local families that were evicted.

“It seems like people aren’t getting paid enough in wages if they’re working,” she said, “or don’t make enough in general to afford their rent.”

In the face of these numerous challenges, several joint initiatives are under way between local agencies that team up to tackle homelessness. Southwestern, Hundred Nights and the Monadnock Center for Violence Prevention formed a collective this summer to apply for funding through the Monadnock United Way. Their group, the Cheshire County Emergency Housing Collaborative, was allocated $76,500 for 2020.

Waters said forming the group brought a laser focus to the organizations’ collective goal of rapidly rehousing people who use their services.

He said the state’s Coordinated Entry System, created and managed by the N.H. Bureau of Homeless & Housing Services, is another way organizations cooperate to benefit people in need. The system comprises a statewide network of shelters, food pantries and other resources. A person at risk of or experiencing homelessness can call 2-1-1 to get details about available resources.

Callers can also choose to provide their information to be added to a statewide “by name list.” The system is intended to streamline the process of finding housing with the goal of securing it for the most vulnerable first, according to the bureau’s website.

“I’m able to communicate with Mindy [Cambiar] and Jeff [Nass, shelter administrator] at Hundred Nights and say, ‘Hey, these people are coming up on the list for housing,’ ” Waters said.

That inter-agency communication is crucial to getting people out of shelters, he added.

The public can help the education efforts, too.

“If anybody comes across anybody experiencing homelessness or at risk of homelessness, have them contact 211 or my office and reach out … and the earlier the better, especially if they’re facing homelessness,” Waters said. “Oftentimes we can prevent that from happening in the first place.”

And on the off-chance someone sees a campsite in the woods where someone might be living, Waters urged people to not be afraid. If they feel comfortable checking on the person’s well-being, they can do that, he said, but they can also call his office directly at 719-4243.

“And I personally don’t mind getting 10 calls a day about the same sites I already know about,” he said. “It just shows that people care. I’ll take those calls all day.”

Meanwhile, there are myriad opportunities for people to volunteer their time with local agencies. Hundred Nights has orientation sessions scheduled Nov. 2 and Nov. 9 from 3 to 4:30 p.m. and Nov. 5 from 6:30 to 8 p.m.

For anyone interested in learning the ins and outs of volunteering in general, the Greater Keene Homeless Coalition is hosting a training workshop Nov. 6 from 5 to 7 p.m. in the Trustees Room of the Keene Public Library.

The free course will cover risk assessment, relationship building, establishing healthy boundaries and how to focus on one’s strengths. Waters pointed out that he’s had volunteers who were excellent at paperwork while others wanted the social interaction, accompanying him to campsites.

The goal, he said, is to empower people to help others.

“Let’s be real: Everybody wants to do something good,” Waters said. “Deep down, no matter how angry and cynical you may be with the world, you want to do some good.”

Space is limited at the volunteer training workshop, which will include light refreshments. You can reserve a spot by calling Lori Hathaway at 719-4226.

This article has been edited to more accurately reflect the capacity of Hundred Nights when the overflow shelter is included, as well as to correct the number of cots the church provides.