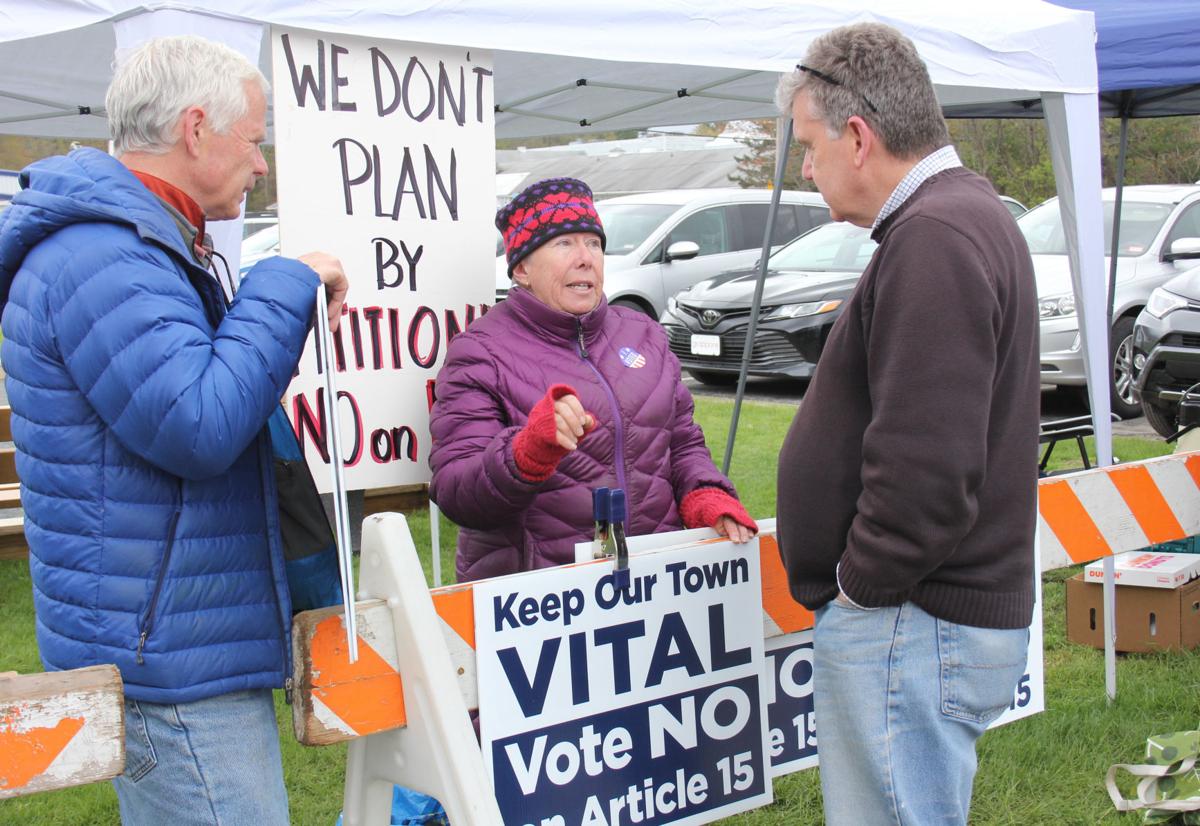 Ivy Vann, center, who is vice-chairwoman of the Peterborough Planning Board, speaks to voter Ken Clarke about proposed Zoning Amendment 15 Tuesday outside the polls at the Peterborough Community Center. Also in the photo is Andrew Hungerford of Dublin, who had come to support Vann. 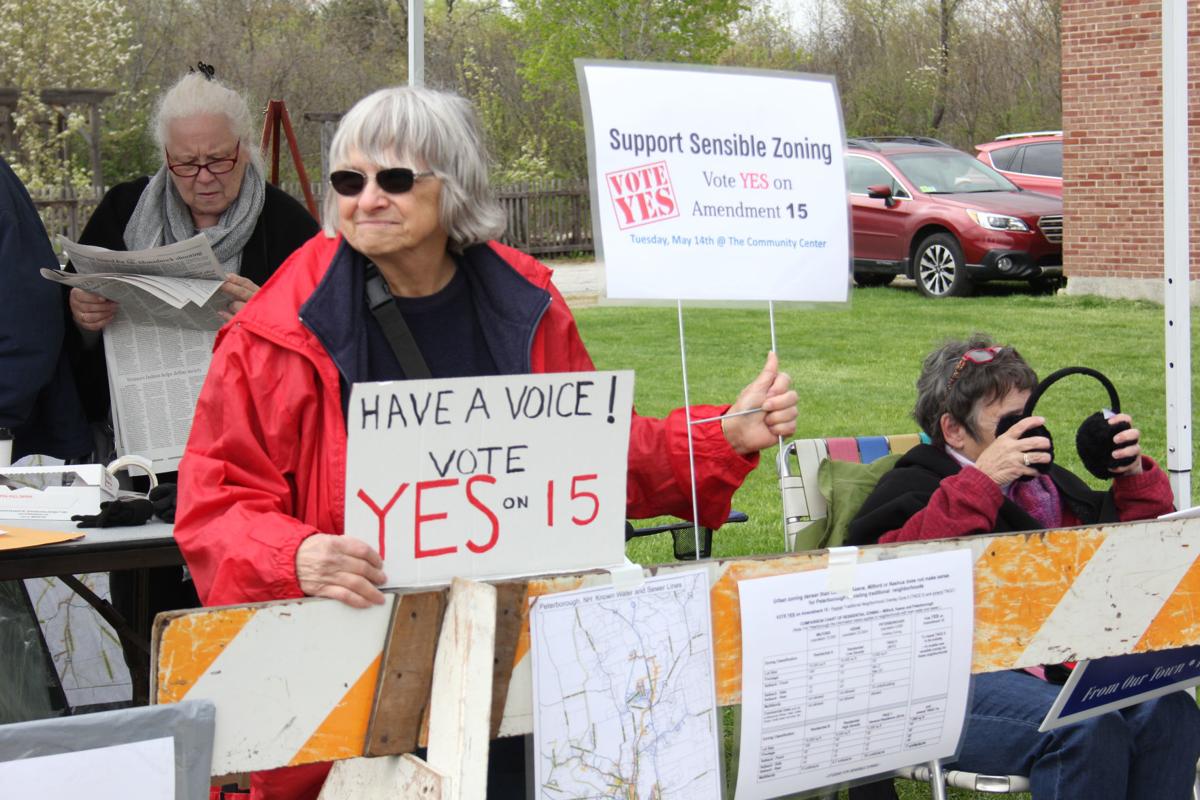 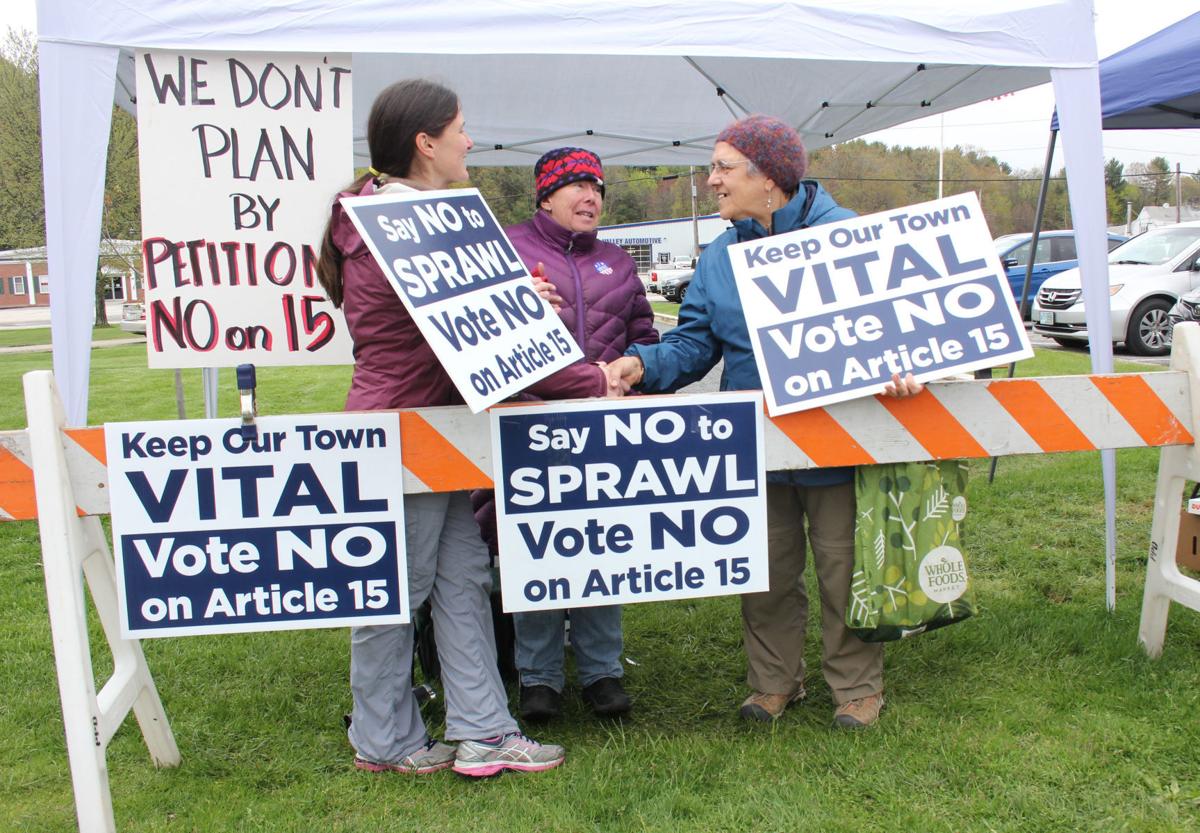 From left, Peterborough residents Denise Zimmer; Ivy Vann, vice-chairwoman of the town’s planning board; and Carol Kraus wave signs against proposed Zoning Amendment 15 outside the polls at the Peterborough Community Center Tuesday afternoon.

Ivy Vann, center, who is vice-chairwoman of the Peterborough Planning Board, speaks to voter Ken Clarke about proposed Zoning Amendment 15 Tuesday outside the polls at the Peterborough Community Center. Also in the photo is Andrew Hungerford of Dublin, who had come to support Vann.

From left, Peterborough residents Denise Zimmer; Ivy Vann, vice-chairwoman of the town’s planning board; and Carol Kraus wave signs against proposed Zoning Amendment 15 outside the polls at the Peterborough Community Center Tuesday afternoon.

PETERBOROUGH — A zoning amendment that pitted the town’s planning board against some members of the zoning board failed at the polls Tuesday.

The amendment garnered the support of a majority of voters Tuesday, but with a final tally of 778 for and 719 against, it fell short of the two-thirds threshold it required to pass.

At issue were two areas that cover the downtown and some of its surroundings and were created to diversify and increase the town's housing stock.

Traditional Neighborhood Overlay Zone I, adopted in 2014, defines geographical boundaries and allows open spaces in neighborhoods to be developed into homes. A second area, Traditional Neighborhood Overlay Zone II, established in 2017, allows for residences to be closer together and permits the construction of multi-family homes and buildings with up to 10 apartments. It also allows for the construction of small stores that serve the neighborhood, such as a coffee shop or a small repair service.

The proposal, Zoning Amendment 15, sought to get rid of Zone II and alter Zone I so new homes would need to be farther apart.

On its surface, the pro and con arguments on the amendment appeared technical and abstract. But they brought to the fore concerns of what proponents said could be the citifying of Peterborough.

Denser housing, some amendment advocates said, could mean the demolition of historic homes, bringing a wave of smaller new dwellings that would take their place. Eventually, they said, the changes could alter the look and feel of the town.

The article was brought forth by the resident group Citizens for Sensible Zoning. Some of its supporters included zoning board member Loretta Laurenitis and alternate Sharon Monahan, who won a seat on the board in Tuesday’s elections. Laurenitis said the zoning board never discussed Amendment 15 in meetings, but said Chairman Dario Carrara and outgoing Vice Chairman Seth Chatfield wrote letters to the editor, published in the Monadnock Ledger-Transcript, against the amendment.

Opponents of the amendment said the two zones prevent sprawl into more rural areas of Peterborough and allow the town to maximize its existing infrastructure by adding homes to areas with roads, sewer and water pipes. Planning board Vice Chairwoman Ivy Vann accused supporters of the article of misunderstanding the intention behind the two zones and conflating zoning with drivers of economic development. Under Peterborough’s zoning ordinance, she said, there are safeguards that make it more difficult to develop large multi-unit buildings.

“Just because something is legally possible doesn’t mean it will happen,” she said.

The planning board voted unanimously against recommending Article 15, according to Vann.

Even before the issue was decided at the polls, tensions flared last week after enough landowners in the affected neighborhoods signed two protest petitions to require the amendment to clear a two-thirds majority to pass.

The residents who filed the zoning amendment, through their lawyer, objected to the protest petitions on procedural grounds, according to a May 11 letter to Town Administrator Rodney Bartlett from attorney Mark D. Fernald of Peterborough. On Tuesday, Monahan implied legal action about the validity of the protest petitions could be forthcoming.

“I felt that we would get the majority,” Monahan said when asked about the group’s chances. “I am disturbed about this protest petition. ... I’m afraid to comment; I will probably be part of the lawsuit.”

Outside the polls at the Peterborough Community Center Tuesday afternoon, opponents and proponents of the amendment sequestered themselves under opposite canopies. Each camp, consisting of a handful of residents, waved its signs, greeting the steady stream of voters with a slogan, a smile or a simple hello.

Vann stood near a handwritten sign that said “WE DON’T PLAN BY PETITION. NO on 15.”

“Vote no on 15,” she told a woman heading inside, repeating a message she delivered almost word for word at least a few times in the space of an hour.

The woman ambled by on crutches, stopping to consider Vann and her sign before continuing her journey.

Other voters stopped for longer chats. Ken Clarke, who lives in a rural part of town, said his conversation with Vann got him thinking. He declined to discuss his position, but acknowledged that both sides worked hard to convey their message.

“A lot of people put a lot of effort, and there is probably lots of confusion (about the amendment),” he said.

On the opposite side of the walkway, supporters of the amendment waved signs of their own.

Laurenitis, surrounded by zoning maps, waved two placards: “Support Sensible Zoning. Vote YES on Amendment 15,” one said. “HAVE A VOICE! VOTE YES ON 15,” the other exclaimed.

Though Peterborough is a small town, said Monahan, who stood next to Laurenitis, she said current zoning ordinances allow for homes closer together than in the city of Keene. The amendment, she added, would correct that.

“We just want (the distance between homes) increased because we feel that Peterborough is supposed to be a little more rural than (larger communities like) Milford or Keene. We just didn’t feel it fit with our neighborhoods.”

Across from her, another resident, Andrew Dunbar, who lives in downtown Peterborough, held a sign with similar sentiments. He said he wants the town to remain exactly as it is. Though the community’s existing housing stock may not be suitable for everyone, he said, nothing prevents people from living in outlying towns and working in Peterborough.

“If it’s changed dramatically by over-urbanization, we’re going to just be like every place else ... and we’ll just become everywhere, U.S.A.,” he said.

A few feet away from him, another resident, Denise Zimmer, had an entirely different opinion. Zimmer, a mom of two young children, said her family recently moved to a historic home near downtown. Finding a suitable dwelling, she said, was a challenge, and the family eventually settled for an 1830 house that was slightly larger than the three- to four-bedroom they originally wanted. But the house ticked most other boxes on her wish list: It’s within walking distance to the elementary school and the downtown, allowing her children to walk places without crossing a highway.

Zimmer said the current ordinances allow for the development of different types of homes on small lots, meaning the town could have development of housing options that are more suitable for young families like hers. Such units, she explained, could attract more families with children to the town and its school district.

The architects of the zones, she said, sought to address the town’s housing needs.

“They are among our town as well,” she said. “They live right next to us there; it’s not like they are coming from outside and trying to change our town.”

This article has been updated to correct a description of the overlay zones' locations.