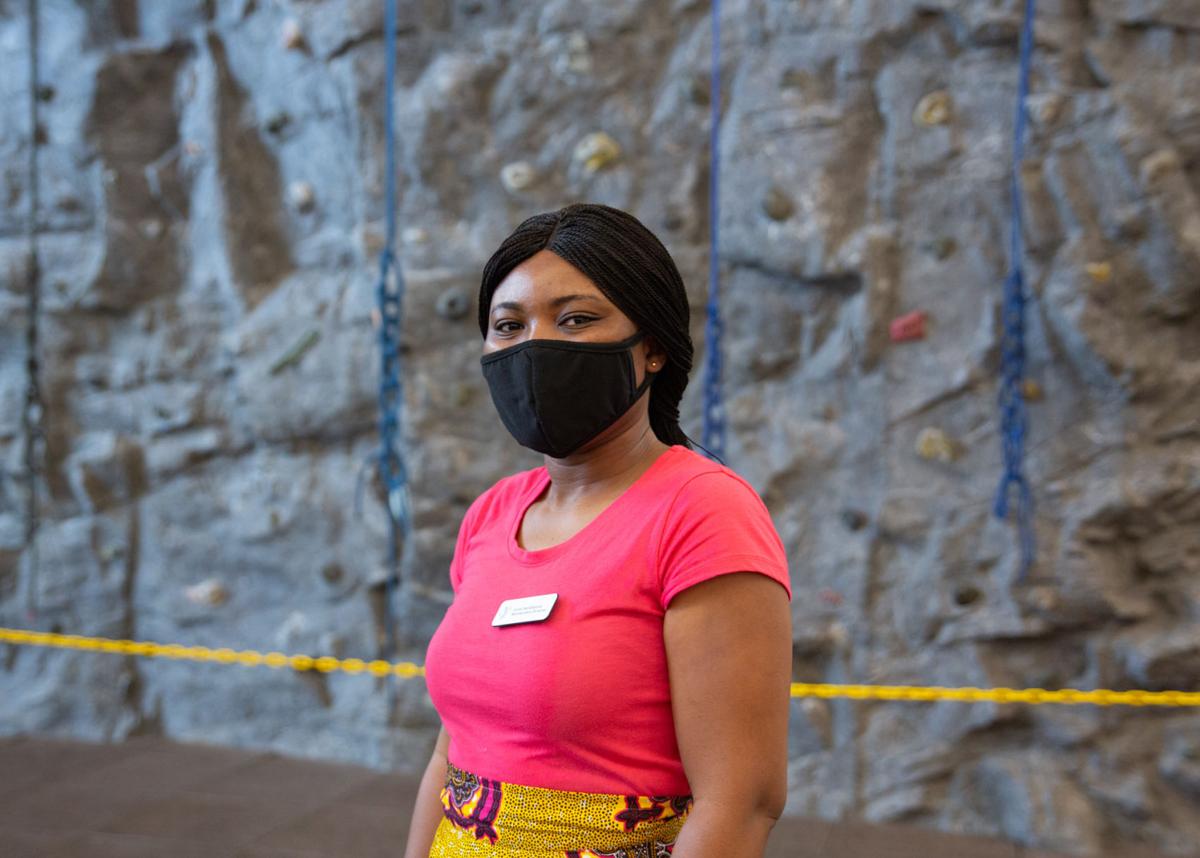 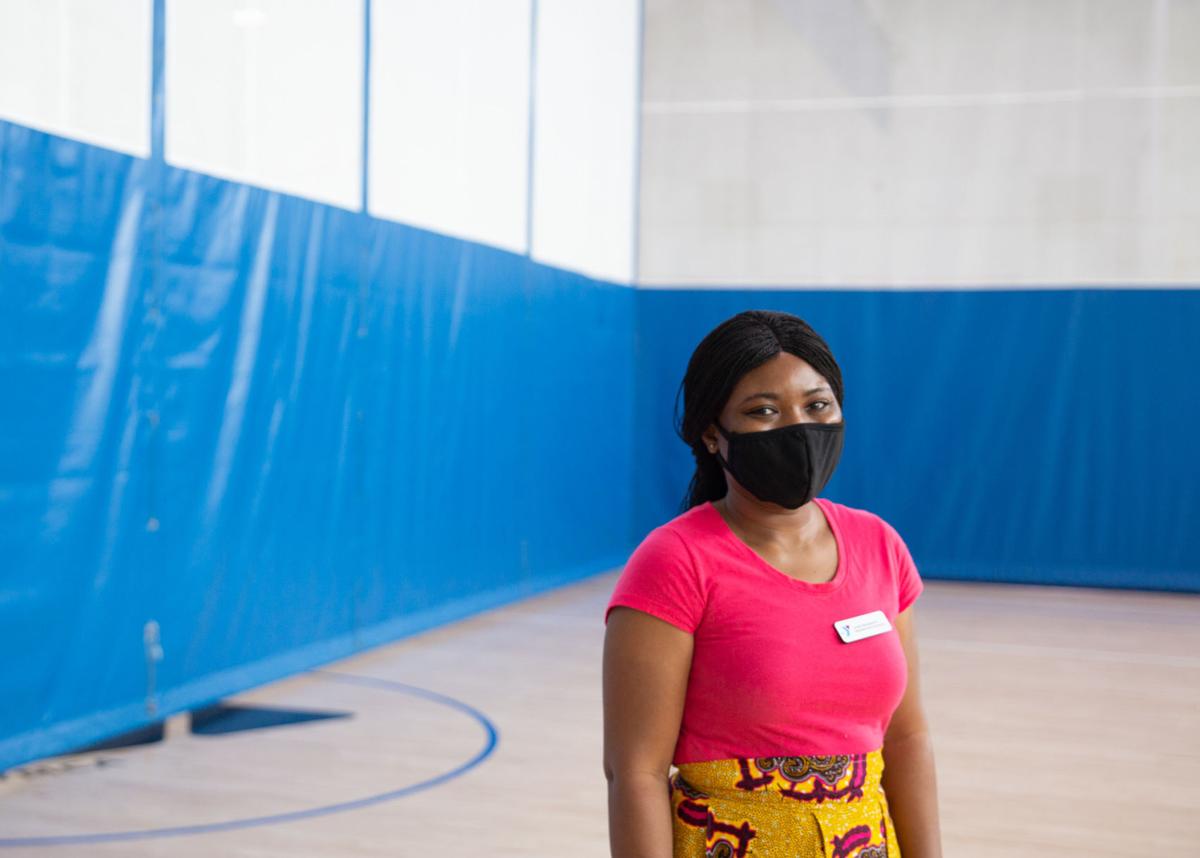 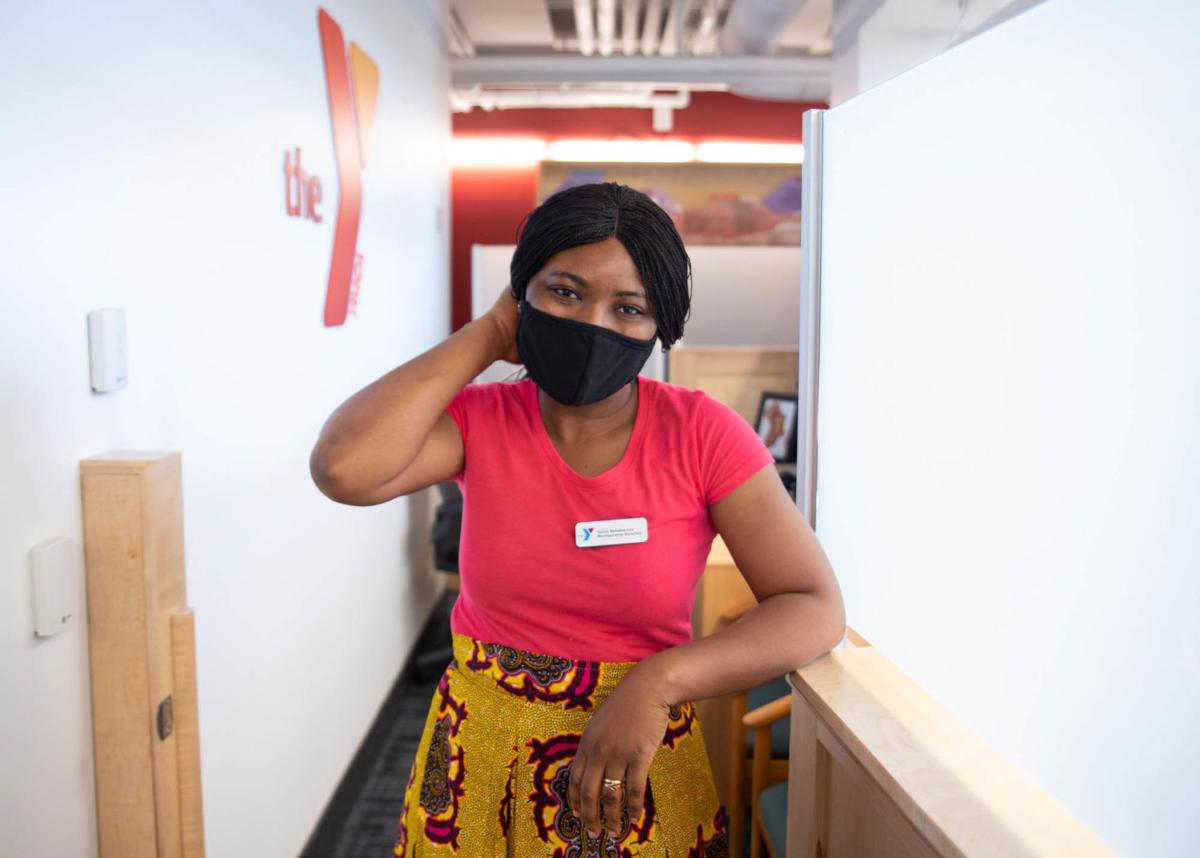 Juliet Baliebanoe, new Member Services Director at the Keene YMCA, poses for a portrait in her office at the YMCA on Wednesday. (Hannah Schroeder / Sentinel Staff) 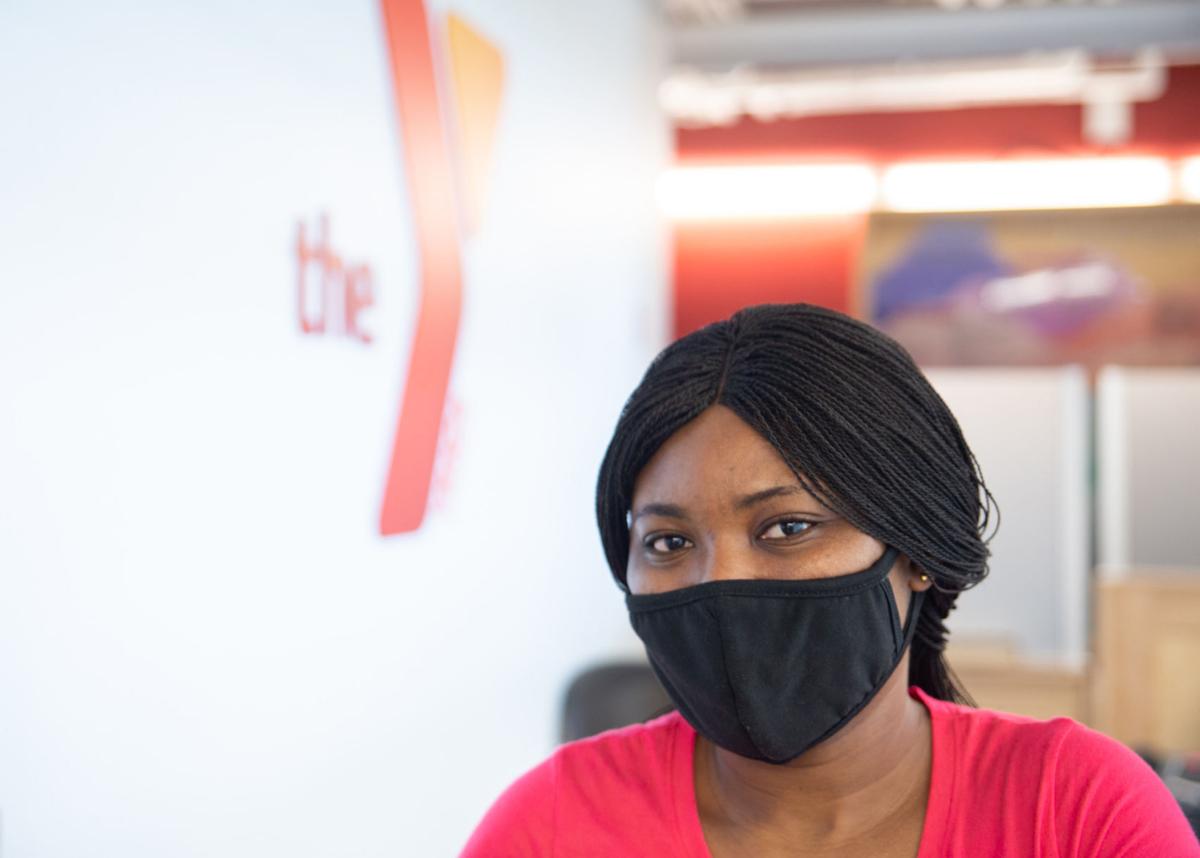 Juliet Baliebanoe sits outside at the Keene Family YMCA, and the bright afternoon sunlight enhances the pastel colors of her full-length dress. It’s similar to the ones worn by women in her native Ghana.

“I made this,” the 33-year-old Keene resident says, proudly pointing out her vibrant garment. “You see, I love to sew.”

She’s dressed for International Exploration Day, an event earlier this month that promoted the YMCA’s summer camps. The building was festooned with displays about other countries, its staff decked out in clothing representing world cultures.

Baliebanoe joined the Y this past March as its membership director, assisting in the organization’s efforts to both entice back those who quit amid the programming restrictions of the long COVID pandemic, and to recruit more families, with a focus on those with more diverse racial and ethnic backgrounds.

“Keene is changing; there are more people of color here,” she says. “Our aim is to provide more access and to be more inclusive.”

Baliebanoe says the Y wants to expose kids to a wider ethnic and cultural experience. Besides operating summer camps, the Y sponsors programs in gymnastics, swimming, basketball and nature trips. It is also a major provider of day care in Cheshire County.

Baliebanoe points out that children are unaware of biases and prejudices that may plague adults.

“The young don’t see color; for them it isn’t a priority. They realize that we’re all part of humanity,” she explains.

Her mission is part of an organization-wide initiative to create a more inclusive environment.

“I’ve long been an advocate for the voices of those who may have not been heard before,” says Dan Smith, the Keene Y’s executive director. “We’re concentrating on diversity, equity and inclusion.”

Paul Miller, the Y’s development and community impact director (and former executive editor of The Sentinel), adds that Baliebanoe’s background “brings a unique life and cultural perspective and a background of advocacy to a demanding, people-centric job. Her priority focus on recovering membership lost to the pandemic is unenviable, but she and the team she leads are embracing that challenge.”

Baliebanoe was born and raised in the village of Nadowli in the Upper West Region of Ghana, a semi-arid area near the southern fringes of the Sahara desert. Her father, John Baliebanoe, and her mother, Magdeline Bonye, were schoolteachers and educational administrators. Both are now retired.

“My parents valued education,” Baliebanoe says, and they encouraged their family of eight children — Juliet the youngest of five brothers and three sisters — to pursue their studies. She attended elementary school in Nadowli and a coed Catholic high school.

As a young woman, Baliebanoe observed that women with education advanced in society and earned more money, providing additional opportunities for their children.

“I came to see that women who have disposable income could help their children more,” she says. “When you create opportunities and broaden access to education, things happen.”

Following high school, she was hired by ProNet North, an NGO (non-governmental organization) in the nearby larger city of Wa that promotes childhood education and micro-investment for women who wish to start their own businesses. There she wore many hats, including helping to mobilize women’s groups, assisting children with disabilities and helping to organize clubs for young girls.

“I finally came to the realization that I, too, needed to do more for myself,” she says.

While still working at ProNet North, she enrolled in the University for Development Studies in Wa, graduating in 2012 with a Bachelor of Arts in integrated community development. The following year, she earned a postgraduate certificate in learning organizations and change from the Coady International Institute of St. Francis Xavier University in Nova Scotia.

In 2014, she married Francis Xavier Toukuu, also a native of Ghana, and they are parents to a son, Jeffrey Ryan, 3, and a daughter, Janelle Karen, 19 months.

In 2016, Baliebanoe left Ghana and enrolled in the International Institute of Social Studies at Erasmus University Rotterdam in The Hague, Netherlands, where she earned a master’s degree in developmental studies with a specialty in agrarian environments.

In January 2018, the couple moved to Keene, where her husband finished his doctoral degree in environmental studies at Antioch University New England. He is currently a lecturer in sustainability at Bournemouth University in England, an adjunct faculty member at Antioch and a senior consultant with Law and Development Associates in Accra, Ghana. He lives in Keene.

“Traditional marriages are the most recognized in Ghana and across many African countries,” Baliebanoe explains. “So, based on customs and traditions, in 2014, my husband and I performed the traditional Ghanaian marriage. However, as Catholics, we needed to bless our marriage according to the Church’s tradition, and that was what we did at St. Bernard’s Catholic Church in Keene.”

For two years, she was a stay-at-home mother before taking the job at the YMCA. She said she was motivated, in part, to join an organization “that supports youth development and healthy living while [being] mindful of its contribution to its community,” as she put it in a recent email.

Baliebanoe says she appreciates Keene for the kind of town it is, akin to her own hometown.

“It’s a quiet and close community,” she says. However, she admits that she is homesick for Ghana, which she and her family hope to visit next year.

“I want my children to see where I grew up,” she says. “I don’t want them to get too old before seeing where I came from.”

This article has been changed to correct the year Juliet Baliebanoe left Ghana and enrolled in the International Institute of Social Studies at Erasmus University Rotterdam.

At a glance: Juliet Baliebanoe