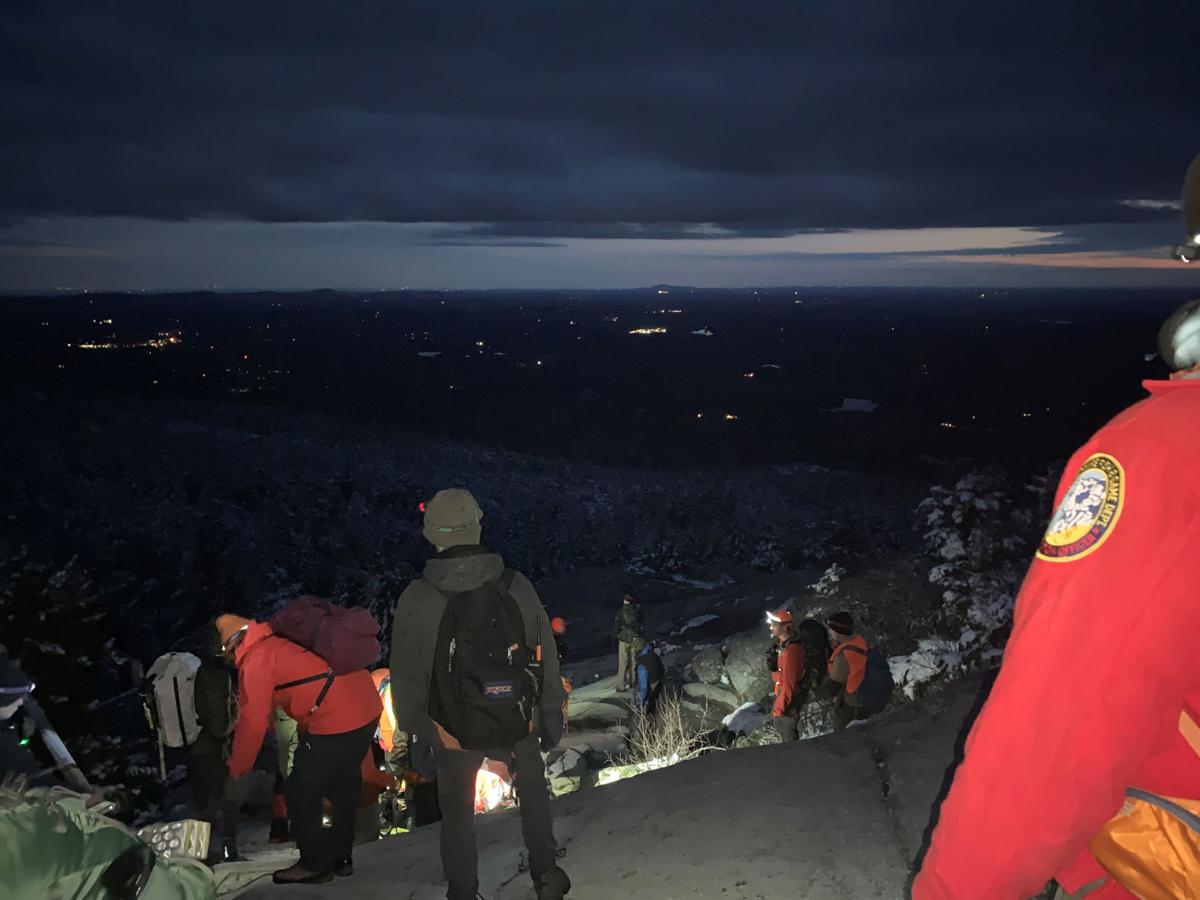 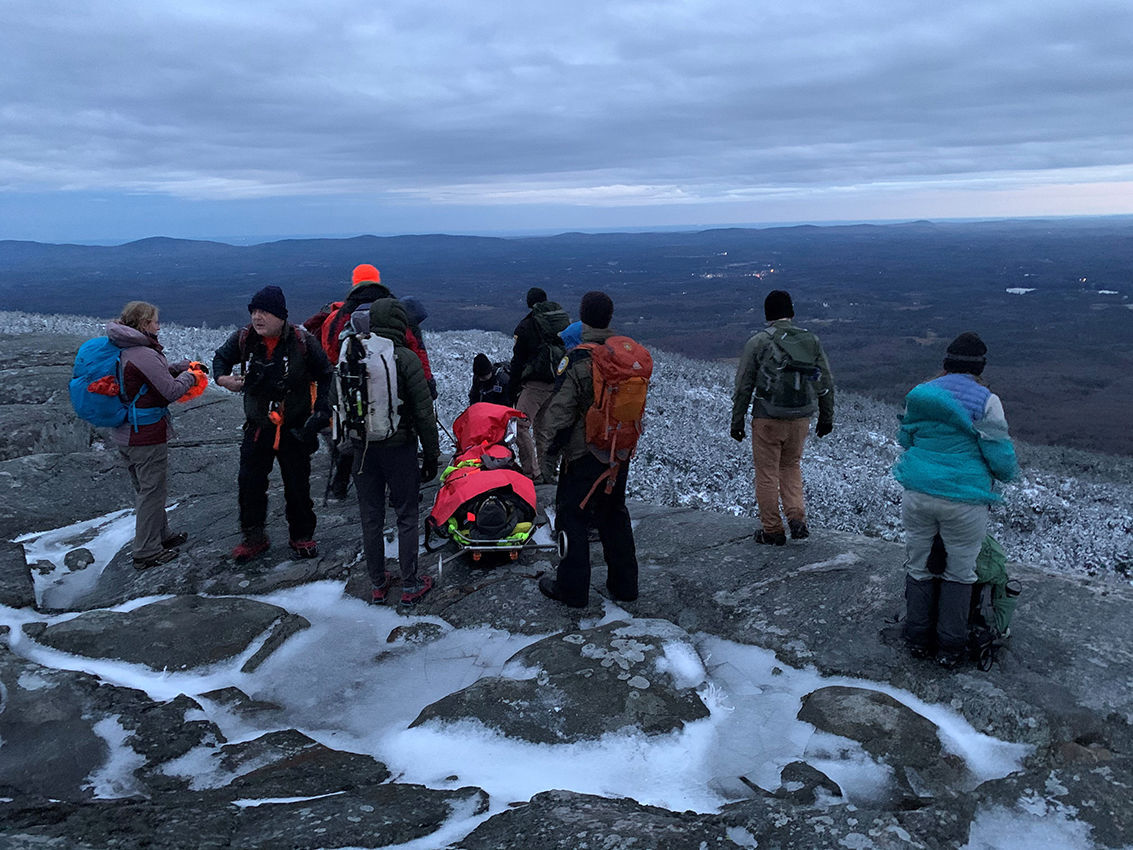 JAFFREY — The N.H. Fish and Game Department says icy conditions were to blame for a busy Sunday on Mount Monadnock, as conservation officers and a group of other rescuers responded to three calls of injured hikers over the course of the day.

The first call came in from Southwestern New Hampshire District Fire Mutual Aid around 10:30 a.m., according to a news release issued Monday by Fish and Game. Tina Sharby, 57, of Goffstown, had fallen and needed help after suffering non-life-threatening injuries to her head and shoulder area, Fish and Game Lt. Bill Boudreau said Monday.

She was located a short distance below the summit on Spellman Trail near the Pumpelly Trail junction and assisted down the mountain by park staff and an off-duty member of the Jaffrey-Rindge Memorial Ambulance Service, according to the release.

Rescuers returned to park headquarters shortly after 7:30 p.m., the release states, where a Jaffrey Rindge Memorial Ambulance then took Sharby to Monadnock Community Hospital in Peterborough for evaluation and treatment.

While the Sharby rescue was underway, at about 12:45 p.m. conservation officers received a second call from Mutual Aid of another hiker in need of assistance, according to the release. Frederick Demarco, 53 of North Attleboro, Mass., fell after making it to the summit and suffered a lower-leg injury. “Demarco was at the very peak of the mountain,” the release said.

Conservation officers, along with park staff, good Samaritans who were nearby and members of the Upper Valley Wilderness Response Team ascended to the summit, taking the White Arrow Trail. After Demarco’s condition was assessed by officers, rescuers contacted the Dartmouth-Hitchcock Advanced Response Team (DHART), and a helicopter landing zone was established, the release said.

However, DHART later notified rescuers that the aircraft would not depart because first responders decided it would be too dangerous to land on the mountain in the dark, Boudreau said, and Demarco’s injuries were not life-threatening. It was determined that the fastest way off the mountain would be to descend via the White Arrow Trail to Old Toll Road, where the rescue team faced wet, steep and slippery trail conditions, as well as snow at the summit, the release said.

“While descending the White Arrow Trail with Demarco, at approximately 5:56 PM, Conservation Officers received yet another call about a third injured hiker on the Mountain,” the release said. “This hiker had also suffered a fall and was in need of assistance.”

The hiker, 43-year-old Kateri Demartino, of Gardner, Mass., frequently hikes Monadnock, according to the release. She was hiking the mountain Sunday when she noticed the emergency vehicles responding to the injured hikers and decided to see if she could be of assistance. She ascended the White Arrow trail to the top of the mountain, but didn’t find anyone there, the release said.

On her way back down, just prior to the reaching the area where rescue teams were carrying Demarco, Demartino fell and suffered serious, but non-life-threatening, injuries to her head, Boudreau said. Four rescuers left the party carrying Demarco and went back up the mountain to locate Demartino, who was found using coordinates provided by her 911 call.

“As Demarco was about to be put into the second Jaffrey-Rindge Memorial Ambulance a decision was made to have that ambulance respond to the top of the Toll Road for Demartino,” the release said. “Demartino’s condition was deteriorating and became a higher priority for transport to the hospital.”

She was assisted down the mountain to the top of Old Toll Roll, arriving around 7:45 p.m., and was taken to Monadnock Community Hospital by a Jaffrey-Rindge Memorial Ambulance. An ambulance from the Peterborough Fire and Rescue Department was called in to take Demarco to the same hospital.

In its news release, Fish and Game urges hikers to be mindful of the weather and to expect winter-like conditions on the mountain at this time of year, adding that proper footwear, including micro-spikes, is crucial. More hiking safety information and a list of essential gear can be found online at hikesafe.com.

This story has been updated with additional information from N.H. Fish and Game Lt. William Boudreau.Mia Summerson can be reached at 352-1234, extension 1435, or msummerson@keenesentinel.com. Follow her on Twitter @MiaSummerson.