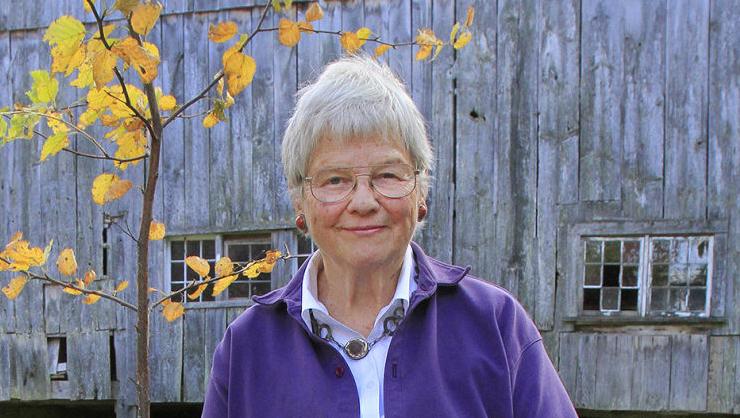 Mimi Bull enjoys the weather at home in Peterborough, with her book, “Celibacy, a Love Story: Memoir of a Catholic Priest’s Daughter.” 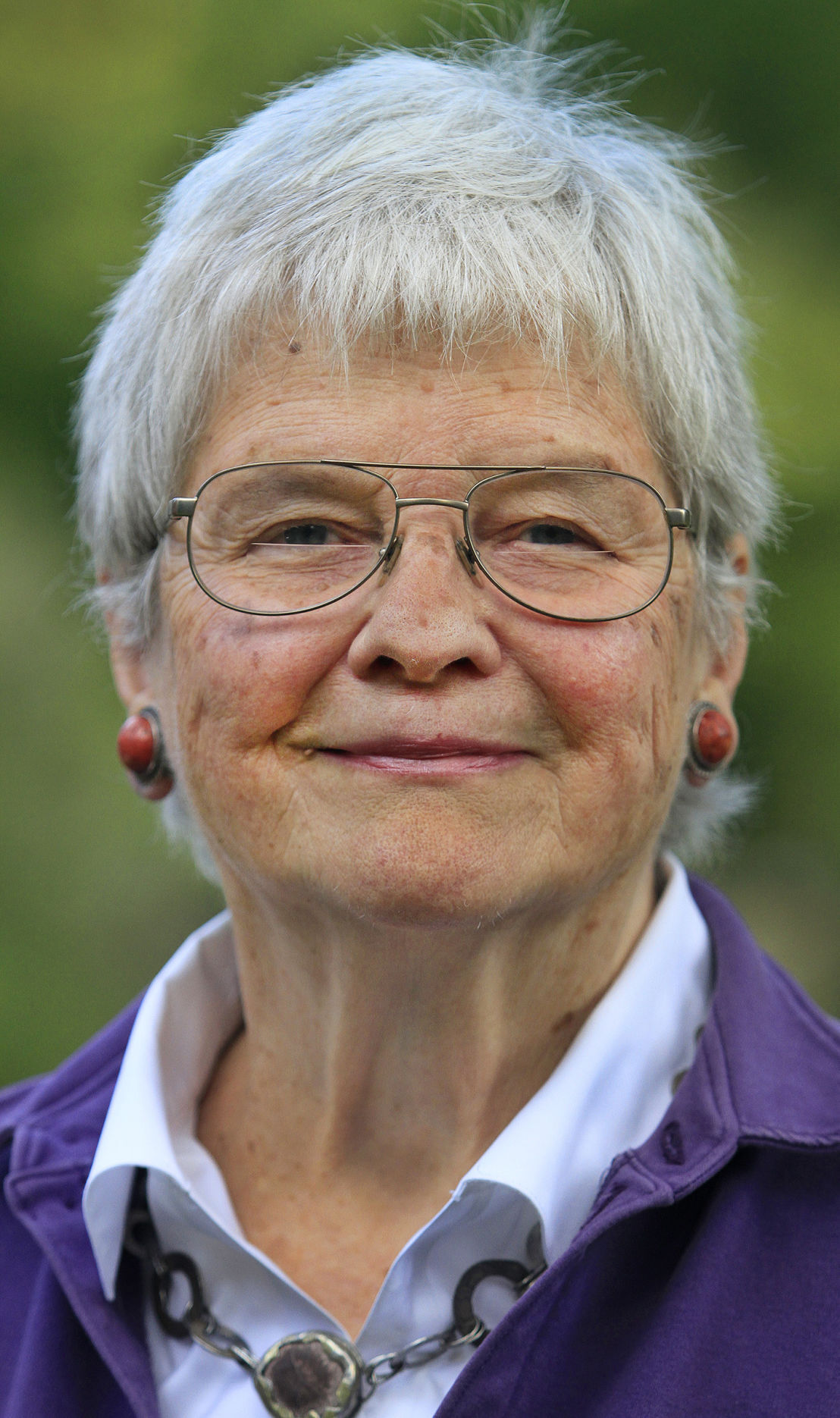 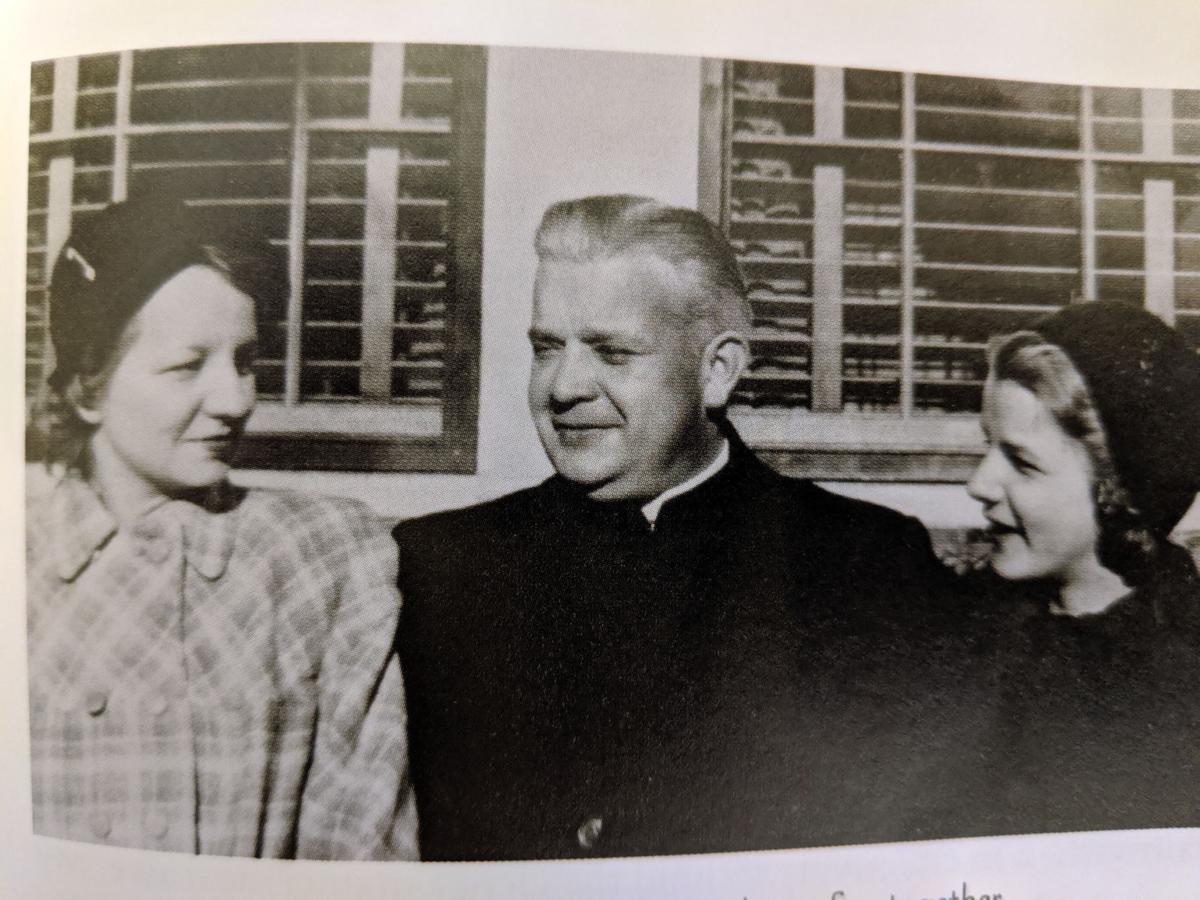 A childhood photo from Mimi Bull's memoir shows Mimi, at right, with the people she'd later discover to be her mother and father Florence Foyette and Rev. Hippolyte "Hip" Zawalich.

Mimi Bull enjoys the weather at home in Peterborough, with her book, “Celibacy, a Love Story: Memoir of a Catholic Priest’s Daughter.”

A childhood photo from Mimi Bull's memoir shows Mimi, at right, with the people she'd later discover to be her mother and father Florence Foyette and Rev. Hippolyte "Hip" Zawalich.

PETERBOROUGH — It’s unseasonably cold for this September morning. The leaves on the trees have barely begun to turn, yet there’s frost on the ground. Mimi Bull opens the door to her home here, an old one constructed in 1790, and some of the heat that has built up inside rushes out. She shuts it quickly.

Within a few minutes, she sits down in a room next to the kitchen that serves as her office and is where she writes. The walls hold art objects bought in shops and bazaars in places she has lived abroad. A window by her desk looks out onto a small field. The day is bright, the sunlight almost blinding.

She has a story to tell about herself, and it turns out to be a roller-coaster of a saga that involves a search for her own identity, a childhood established on a foundation of fabrications, a scandal that was hidden for years, decades of depression, a marriage at a young age, and an affair that lasted more than 30 years with a man she met on a train. Oh, and working for and becoming a close friend to a man who was arguably the most influential shaper of American foreign policy following World War II, George F. Kennan.

“I kept intense journals,” says the 83-year-old Bull, a widow who looks a full 10 years younger. “They gave me a coherent story to tell myself and made me think through all the issues in my life.

“I’ve had four lifetimes; that’s why I’m so at peace with myself now,” she says.

Those journals eventually were the raw material she used to write a book, “Celibacy, a Love Story: Memoir of a Catholic Priest’s Daughter,” published by Bauhan Publishing in Peterborough last year.

The story starts with her having been told as a child that she’d been adopted — the first of several deceptions that she learned about much later in life.

“… Alice Foyette adopted me in July of 1937 in Philadelphia when I was eight-and-a-half months old and brought me back to Norwood, Massachusetts to live with her and her grown daughter, Florence,” the memoir begins.

This was a fabrication that Bull believed until she was 34, when Florence, her supposed sister, admitted she was, in fact, her mother, and that Alice, who had since died, was actually her grandmother.

“It blinded me as one is blinded by light after a blindfold is removed,” Bull wrote.

But she was also ecstatic by the news, she noted in the memoir, “knowing that this woman whom I so loved was indeed my real mother …”

— “But right away that begged the question about who was my father?” Bull says.

She asked, and Florence told her it was a Philadelphia businessman with whom she’d had a brief encounter, and that she didn’t know his name nor recall the details.

That was a deception, too, and Bull didn’t learn the truth until 15 years later at Florence’s funeral, where Bull received two pieces of information that rocked her world.

One, she learned that relatives and close friends of her mother had known for years that Bull was her daughter, but had kept the secret alive to protect Florence’s reputation.

Then she learned who her real father was, and it was a bombshell.

”My mother’s close friend, Harriet Smith, was standing outside. She had been unable to face the funeral service or the crowd at the reception, and had told me that she would come to see me afterwards.”

The two sat down to talk.

‘Oh, please don’t make me be the one to tell you!’

And then I knew.

What had actually occurred was that Alice Foyette, to avoid scandal and family shame upon learning her daughter had been impregnated by a priest, stage-directed — along with her own mother — the elaborate scenario, including having her daughter move for three months to Trenton, N.J. to live with relatives.

“When the time came, my mother went to Philadelphia to give birth, but I have no idea where or under what circumstances. After my birth in October, she placed me with a foster family somewhere in the city and returned to Norwood,” she wrote.

“I don’t have a birth certificate,” Bull says, nor any solid information about the first eight to nine months of her life, up until the first picture of her in her mother’s photo album with “July 18, 1937” written under it.

Ironically, Zawalich had been an ever-present father figure to Bull growing up, visiting the family frequently, taking trips with them, carefully tending to the child’s progress in school, and exerting a significant influence on her upbringing. When he died at the relatively young age of 47, Bull — then a freshman at Smith College in Northampton, Mass., was devastated.

Realizing at the age of 48 that her real father had been a priest and her mother’s lover shook the foundations on which Bull lived, exacerbating the bouts of depression she had been suffering for decades, even descending into thoughts of suicide. Now, she had to re-think all that had happened to her since she was a little girl.

As a young child, Bull explains in her memoir, she had often wondered who her real parents were, as many adopted children do. But life proceeded apace for her in a normal fashion, attending elementary and high school, a young lady growing into adulthood. Plus, there was always the helpful presence of Father Hip.

During her senior year at Smith, she met Neil Bull at a wedding.

“He had classical good looks and we met on Friday and he proposed to me on Saturday. I was absolutely overwhelmed. He was 31 years old, and I was 20,” she says.

The two married a year later. “I graduated on Sunday; John F. Kennedy was our commencement speaker,” she says. “It was 1958. On Tuesday we married. Our honeymoon was in Jamaica, and I came back pregnant.”

The couple moved to New Jersey, where Neil got a job at The Lawrenceville School. They lived there two years until he secured another job in 1960 as headmaster at Robert College in Istanbul, considered the most prestigious secondary school in Turkey.

“That was the most glorious six years of our lives,” she says, as they lived in a big, beautiful home at the school that overlooked the Bosporus, their very active social life filled with a diverse set of friends and colleagues.

From there, now with three children in tow, the couple moved to Sedona, Ariz., when Neil became headmaster at the Verde Valley School, where they lived for four years.

During these years, she began to feel she possessed no life of her own, and a seeping melancholia overtook her.

“My need for recognition, for being seen as a person in my own right, separate from my husband, came to the fore in those years,” she wrote in her memoir. ”Intermittently beset with depression, I sometimes felt that if I passed a mirror, my image would not be there.”

Her husband knew of her depression, “but hiding it was by now my deeply engrained habit,” she wrote.

Her husband’s contract with the Arizona prep school was terminated because of disagreements with its board of trustees, Bull says, and the couple moved to Princeton, N.J., where Neil, along with a friend of his, had started an educational services firm.

That single year they spent in Princeton transformed her.

First, she found out that her “sister” was her mother, then she began to seriously question her 15-year marriage. And because of an invitation to a dinner party hosted by an old college friend, she met the famous George Kennan, and he hired her as a research assistant. This started a long friendship that ended with Kennan’s death in 2005 at age 101.

“And, it was a year when I fell deeply in love,” she wrote.

“It all started on a train,” she explains, a routine trip from Princeton to Boston to visit Florence.

The train was very crowded and she took a seat next to “a tall, slender black man, graying at the temples and wearing a clerical collar,” she wrote. A secret love affair developed that was to last for three and a half decades, conducted mostly by letters and telephone, and they were physically together just 10 times. In the book, she does not reveal the man’s name, referring to him only as “Ben.” Bull’s husband and children knew of her correspondence and friendship with the man, never suspecting they were also lovers, she said.

“I stepped fully into adulthood that year,” she wrote. “I chose my own work and no longer took all of my cues from my husband’s agenda.”

The next year, Neil took a job as headmaster at the American International School in Vienna, where the family spent five years. After that was a four-year stint when Neil was headmaster at a prep school in San Antonio, Texas, and then the couple returned to Princeton. There, Neil started the Center for Interim Programs in 1980, a company that assisted students and their families in what is now called the “gap” year some people take between high school and college. Through the years, the company has prospered, and is now headed by the Bulls’ daughter, Holly.

Throughout all the activity and movement in her life, Bull continued to struggle with depression and a flatline feeling despite “having it all,” she says. The revelations about her early life story haunted her. “… my backstory had changed from being an adopted child of two women to a secret, illegitimate child with an unknown father,” she wrote.

Visits to counselors and psychiatrists were unable to offer much help, she says, and they were confounded as to the source of her malaise.

One thing did help her spirits, and that was a series of seminars in journal-writing. From her memoir: “I stumbled into a kind of writing …that encouraged inner dialogue with significant aspects of one’s life — that would play a critical part in helping me to make sense of myself and my world.”

In 1987, the Bulls bought a home in Peterborough and used it as a summer place, commuting on weekends from Princeton.

In 1990, the couple moved from Princeton to Cambridge, Mass., maintaining their Peterborough residence, while Neil still ran the Center for Interim Programs. Mimi Bull earned a master’s degree in geriatric counseling at Lesley College (now university), and went to work at Cambridge Hospital.

Neil died in 2004, from cancer. She never told him of the romantic nature of her relationship with Ben, although later, in 2006, she assembled her children and told them.

Writing the book was a long process. “It took 19 years to get it together,” Bull says. “I worked hard to work my way through this. Writing is one of the great outlets for establishing my equilibrium.”

The memoir has received its share of publicity, being featured in The Boston Globe and prompting Bull to be interviewed by WBUR in Boston. Women who have read the book have contacted her, too.

“I’ve had a readership of young women who have garnered a lot of hope from what I wrote. One of them was intrigued that you can go through this and come out intact on the other side.”

And, she has advice for those who may be coping with life’s hard jolts.

At a glance: Mimi Bull