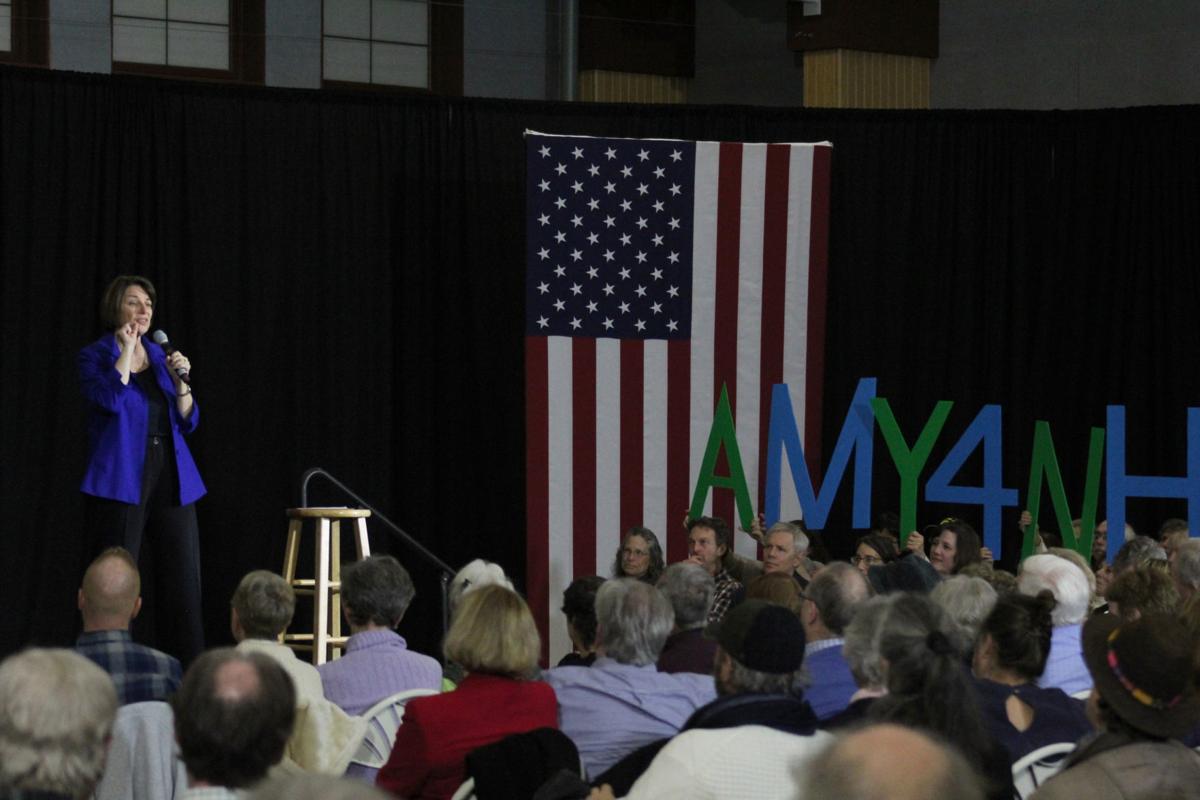 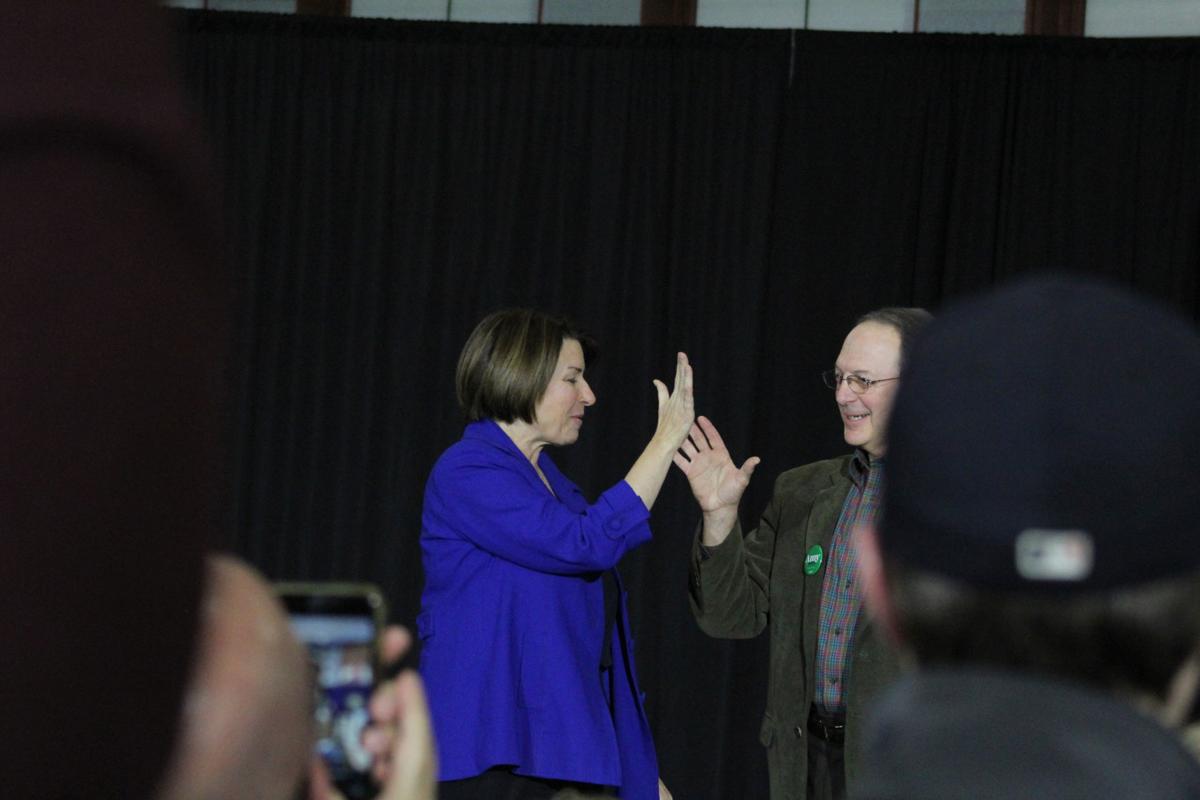 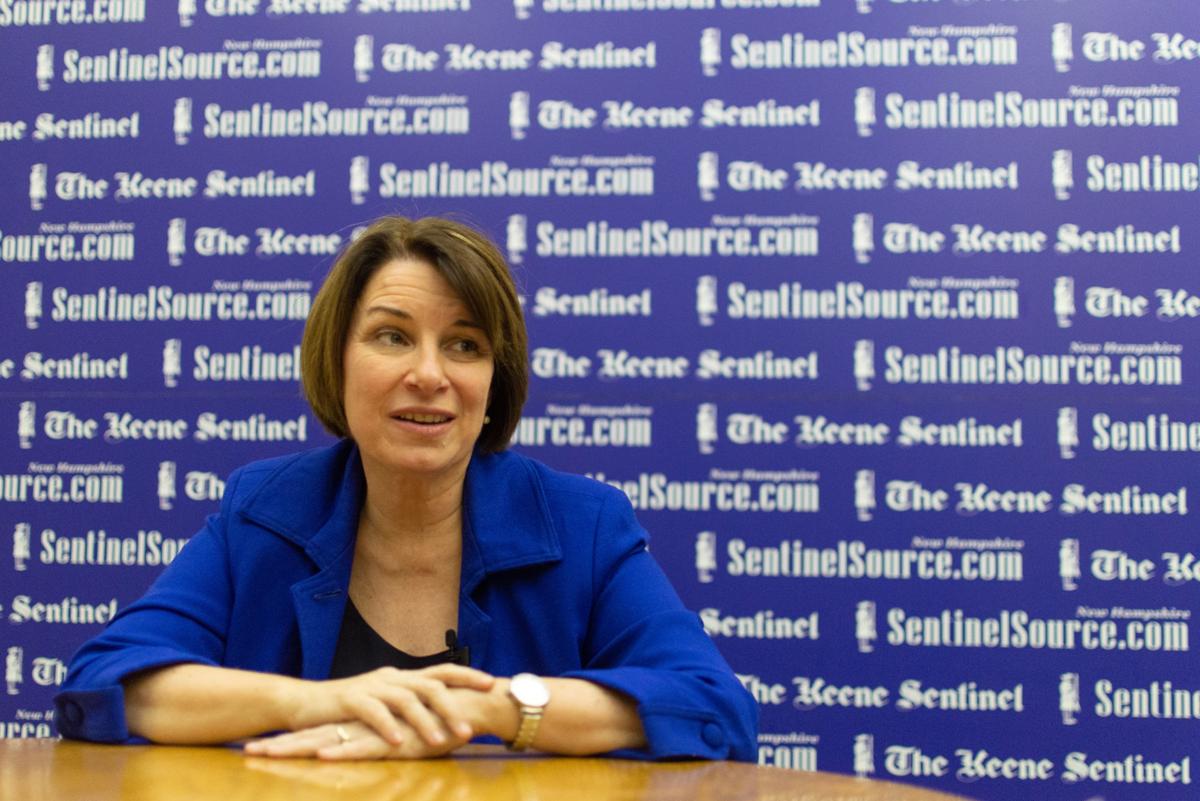 After holding a rally at Keene High School Tuesday, U.S. Sen. Amy Klobuchar, D-Minn., continued on to West Street for an interview with The Sentinel's editorial board. Klobuchar is seeking the Democratic nomination for president.

After holding a rally at Keene High School Tuesday, U.S. Sen. Amy Klobuchar, D-Minn., continued on to West Street for an interview with The Sentinel's editorial board. Klobuchar is seeking the Democratic nomination for president.

Democratic presidential candidate Amy Klobuchar closed out the year Tuesday by drawing her campaign’s largest crowd in the Monadnock Region so far.

Building on momentum from an uptick in small donors after several widely praised debate performances, Klobuchar spoke to a crowd of more than 400 packed into Keene High School’s cafeteria.

The senior U.S. senator from Minnesota, 59, also secured the on-stage endorsement of state Sen. Jay V. Kahn, D-Keene — whose district covers most of Cheshire County — before continuing on to an interview with The Sentinel’s editorial board.

The event at Keene High was initially scheduled for the library, and Klobuchar joked to attendees that her expectations were low given it was after dark on New Year’s Eve.

Nevertheless, several rally-goers told The Sentinel they were impressed by Klobuchar upon seeing her in person for the first time, and came away either supporting her outright or leaning closer to backing her after arriving undecided.

“You kind of wait for that firebrand [approaching primary voting day], and she has excitement, and it comes from her,” Janine Lesser, a Peterborough retiree, said while heading out the door.

Lesser, 67, said she already has a lawn sign out for former Vice President Joe Biden, but still hasn’t decided between the national frontrunner and Klobuchar. She said her choice was made more difficult Tuesday, citing Klobuchar’s “wide and comprehensive” breadth of ideas, her experience through a dozen years in the Senate and her passion on the stump.

“I think [Biden] is the safer bet, to tell you the truth,” Lesser said. “... Amy is on fire. I’m really excited about her after listening to her. But more people know Joe.”

“I think she’s excellent. She surpassed my expectations,” Covington, a Hancock retiree, said. “I think she’s the strongest candidate in terms of her ability to do a good job as president.”

Nevertheless, like many other Democratic primary voters, Covington said her highest priority in backing a candidate on Feb. 11 will come down to their likelihood of defeating President Donald Trump in the general election Nov. 3.

Klobuchar’s pitch for why that should be her — which she elaborated upon during her editorial board interview Tuesday — has remained steadfast.

She cites her record as Minnesota’s first female U.S. senator, winning statewide three times in a row among an electorate that leans only slightly Democratic.

On the trail, Klobuchar often recalls how retired professional wrestler Jesse Ventura won the state’s governorship in 1999 as a populist third-party candidate and that Trump lost the state by only 1.52 percentage points to former Secretary of State Hillary Clinton in 2016.

During her sit-down of just over an hour with the editorial board, Klobuchar took time to go into detail on her policies, arguing that well thought out, moderate proposals with a chance of getting passed by Congress should outweigh the more expensive and progressive pitches from rival Democrats.

“I think everyone expects a presidential candidate — after we’ve had this guy in the White House — I think that the difference between a plan and a pipe dream is if you show how you’re going to pay for things,” Klobuchar said.

She contrasted herself with the more progressive 2020 candidates by citing more reliable revenue sources she plans to tap, such as a percentage of the appreciation on trust funds over $500,000, raising capital gains tax rates to the same as annual income, rolling back $30 billion in oil subsidies and removing exemptions on hedge fund gains to secure $18 billion.

Klobuchar reiterated her opposition to free public four-year college tuition, pushing instead for free one- and two-year community college programs as a more efficient use of resources.

She also demonstrated fluency on key New Hampshire issues such as broadband access, the opioid crisis and affordable housing.

While many of her competitors have called for prosecuting the executives of pharmaceutical companies that manufactured painkillers that tens of thousands of people became addicted to, Klobuchar went further to call for a federal-global legal settlement with the industry, modeled on the more than $200 billion one reached with tobacco companies in the late 1990s.

She also spoke to “deaths of despair” and how to address the root causes of the nation’s rising suicide rate.

She outlined her thinking on how to get at these causes, from further understanding the alienating effects of technology to truly enforcing mental health parity — which mandates insurance companies treat physical and mental health claims equally in cost and approval — despite federal legislation from 1996 remaining largely unenforced.

Other topics addressed with the editorial board included immigration, trade, voting and election security, climate change, race relations, her criteria for using military force and the United States’ diplomatic relationships with allies such as those in the G7 and foes such as Iran and China.

She also spoke of her father’s struggles with alcoholism and mental illness, which she said could help reduce the stigma around those issues were she to have the bully pulpit of the presidency.

When asked if she could accomplish just one thing as president, Klobuchar said her top priority would be taking major action on climate change. A top domestic priority would be election security and voting access, which she said should be given to everyone once they turn 18 through their Social Security number.

Her final pitch addressed primary voters’ concerns about electability, but was also a call to unite the country.

“I think you want to have someone at the top of the ticket whose views are ones that at least most of the people in your party agree with, who’s a fighter — a progressive, but a practical progressive — and who has a manner that works to bring people together.”