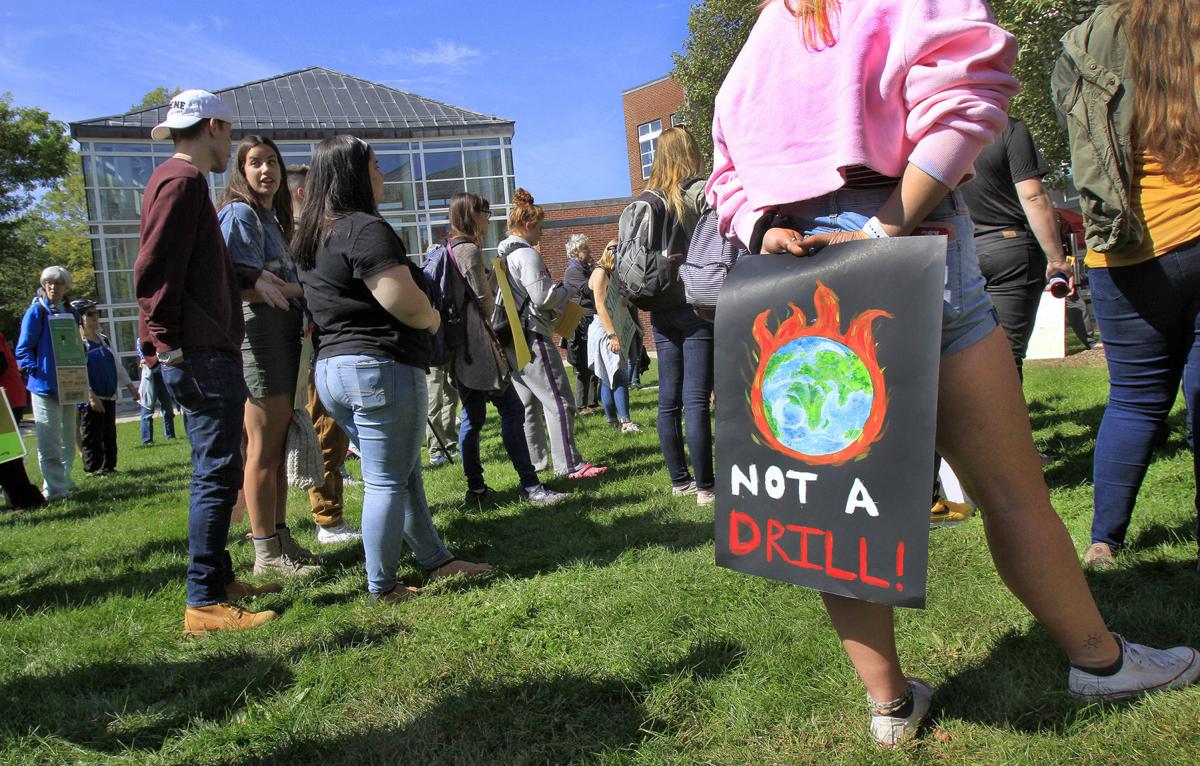 Students, other area residents, and visitors gather outside the Keene State College student center for Friday’s

Climate Strike, which was part of events held worldwide to protest climate change. 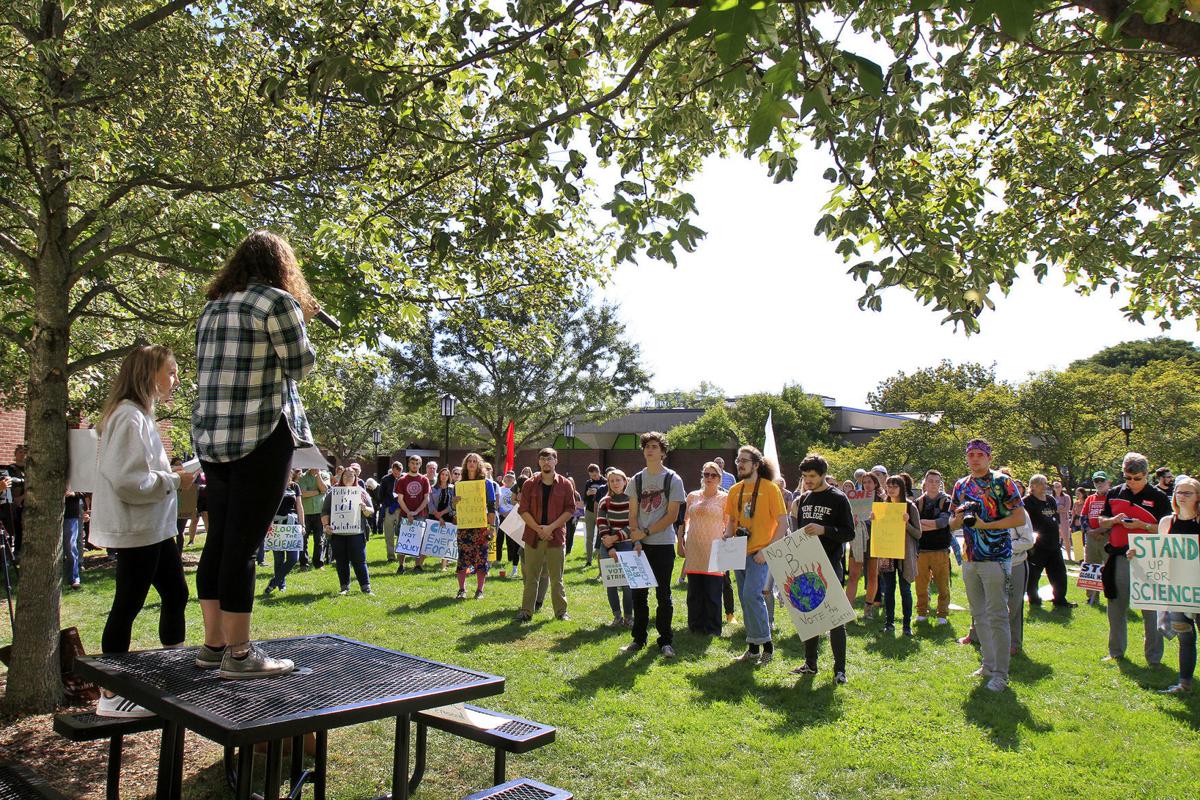 Several participants at Friday’s Climate Strike at Keene State College spoke to the group using the table at left as a platform. Events were also held locally at Central Square in Keene and in Brattleboro.

Students, other area residents, and visitors gather outside the Keene State College student center for Friday’s

Climate Strike, which was part of events held worldwide to protest climate change.

Several participants at Friday’s Climate Strike at Keene State College spoke to the group using the table at left as a platform. Events were also held locally at Central Square in Keene and in Brattleboro.

A panoply of environmentalists, young and old, gathered under the late-summer sun Friday morning along Appian Way at Keene State College.

They were joining a worldwide climate change protest, calling for swift action before it’s too late.

A United Nations study from October last year warned that the world has just 12 years to keep average temperatures from rising 1.5 degrees Celsius, after which hundreds of millions of people would be thrown into poverty from exacerbated natural disasters like hurricanes and wildfires.

The hundreds gathered at Keene State for the “Climate Strike” — and later that afternoon, to a smaller extent, on Central Square — were part of 3,600 similar events that saw thousands take to the streets in major cities across the United States and other countries, according to the main organizing group, Fridays For Future.

A Climate Strike was also held in Brattleboro’s Pliny Park.

In New York City, all 1.1 million K-12 public school students were allowed to skip school for the protest, while young people waved clever signs calling for environmental action from Tokyo to Paris.

At the Keene State rally, a significant portion of the crowd consisted of older folks from the Elm City and surrounding towns.

Suzanne Butcher, 70, of Keene said she’s elated with the commitment young people are making to raise awareness about the consequences of climate change, citing her decades of experience in the arena.

“I was just at the Radically Rural thing, and somebody said, ‘Since the adults are acting like children, children need to take on the responsibility [the adults] should have taken on long ago,” Butcher said, referencing a two-day summit Thursday and Friday held jointly by The Sentinel and the Hannah Grimes Center for Entrepreneurship.

During his tenure as chief of staff to President George H.W. Bush, Sununu was an ardent skeptic of climate change in an administration that came close to reaching a global agreement to gradually wean the economy off of fossil fuels without drastic disruption. In a lengthy New York Times investigation into those efforts, Sununu was reported to have “suspected that the greenhouse effect belonged to [an anti-economic growth] nefarious cabal,” eventually using his influence to thwart U.S. efforts to form a worldwide coalition to curb emissions.

“The facts are clear, facts are important — there’s no question about the facts, except for people who are blinded by other ideology and stuff,” Butcher said.

Standing next to Butcher was Carrie Kidd, 62, of Keene, who argued human psychology is often incompatible with grasping a threat as vast as climate change.

“If you talk to psychologists, you realize that the human being is built to deal with immediate problems, psychologically, and that our tool for doing that is apathy,” Kidd said. “It’s a really, really strong part of our psyche. And what we have to do is overcome our tendency to be apathetic.

“Our generation was clearly apathetic.”

Outside on the green, students took turns speaking out about the threat of climate change and the worries they have about growing up amid increasing turmoil.

“Whether you know it or not, something you love is going to be taken away by climate change,” Robby Saint Laurent, a Keene State sophomore and organizer with the New Hampshire Youth Movement, said at the outset.

Audio issues made portions of the speeches difficult to hear from the crowd, but one that drew strong applause came from a junior who lamented the disintegration of the tide pools along Hampton Beach, rendering a staple of her childhood unrecognizable.

Inside the Young Student Center, Owls who weren’t at the protest discussed where they stood on the issue in between classes.

Jessica Moir, a junior film production major from Nashua, described what she sees as a generational disconnect on the urgency for action on climate change — a viewpoint shared by baby boomers like Kidd and Butcher.

“I think the younger generation definitely is more involved than the older generation,” Moir said. “Because I see a lot of kids sharing posts — that are my age — about climate, where I don’t really see my mom or other older people sharing anything like that.”

J.J. Tinney, a senior physical education major from Natick, Mass., said he tries to pay attention to environmental issues, but often finds himself too busy to be as informed as he’d like. While he said he feels personally ambivalent about some sustainability initiatives at Keene State — such as the removal of plastic straws from beverages in the student center — Tinney noted he’s willing to make sacrifices to reduce his carbon footprint.

With speakers able to volunteer to share their thoughts, suggestions about potential solutions and immediate action that protesters could take fell along a broad spectrum. Some proposed going vegan, while others asked those in attendance to stop traveling on airplanes.

Saint Laurent lamented the lack of support for the Green New Deal — a sweeping proposal costing somewhere between $51 and $93 trillion to cut global emissions in half by 2030 — by all four members of New Hampshire’s congressional delegation, singling out Democratic U.S. Sen. Maggie Hassan for settling for “bite-size solutions.”

In May, Hassan and U.S. Sen. Jeanne Shaheen introduced legislation to consolidate energy efficiency incentives to make it easier for businesses to reduce their carbon footprint.

Keene State Student Body Vice President Sarah Dugas hit on what she sees as the main goal of the protest during her speech.

“This is the first step,” Dugas said, “getting the conversation started and proving we’re ready to fight.”