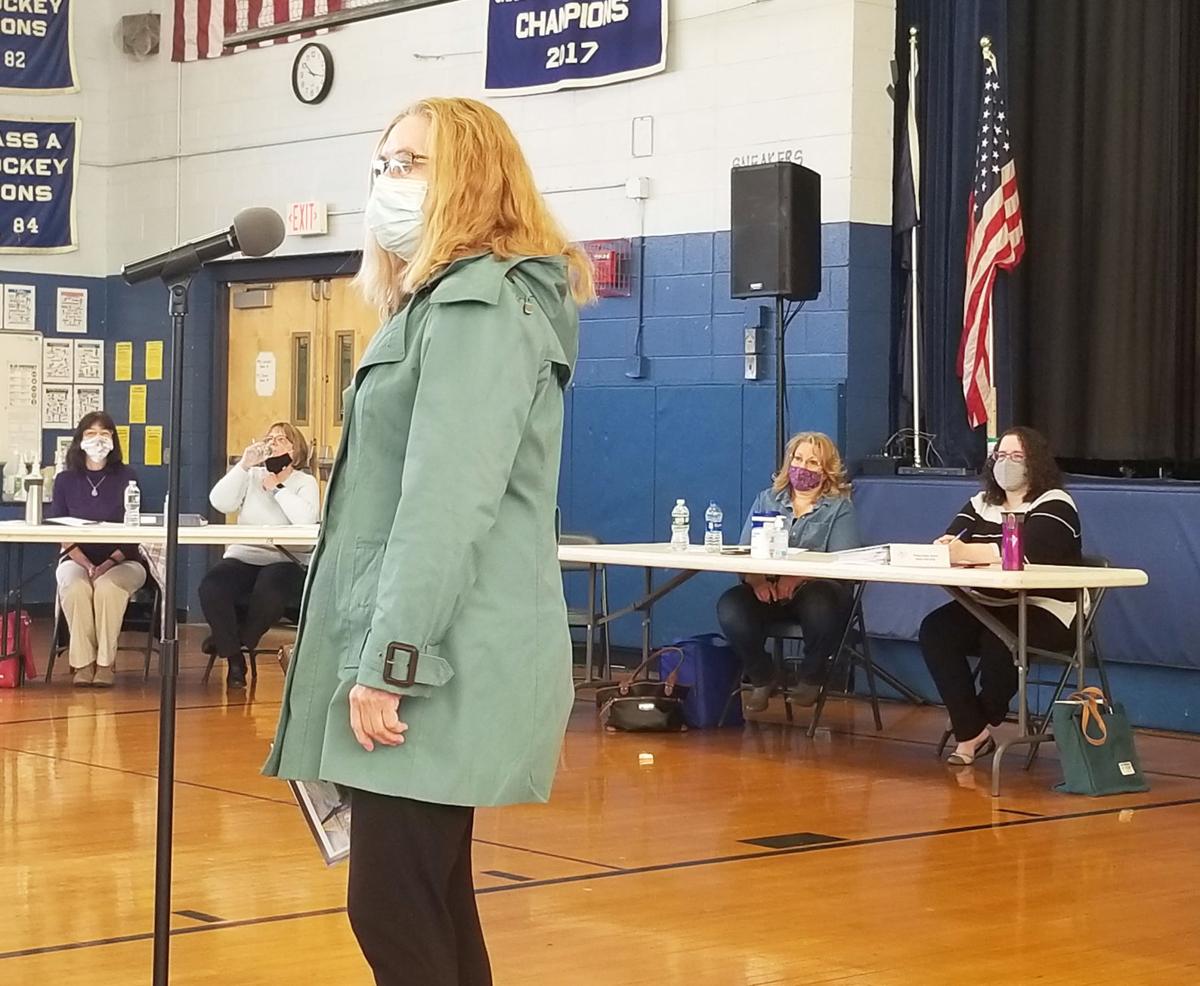 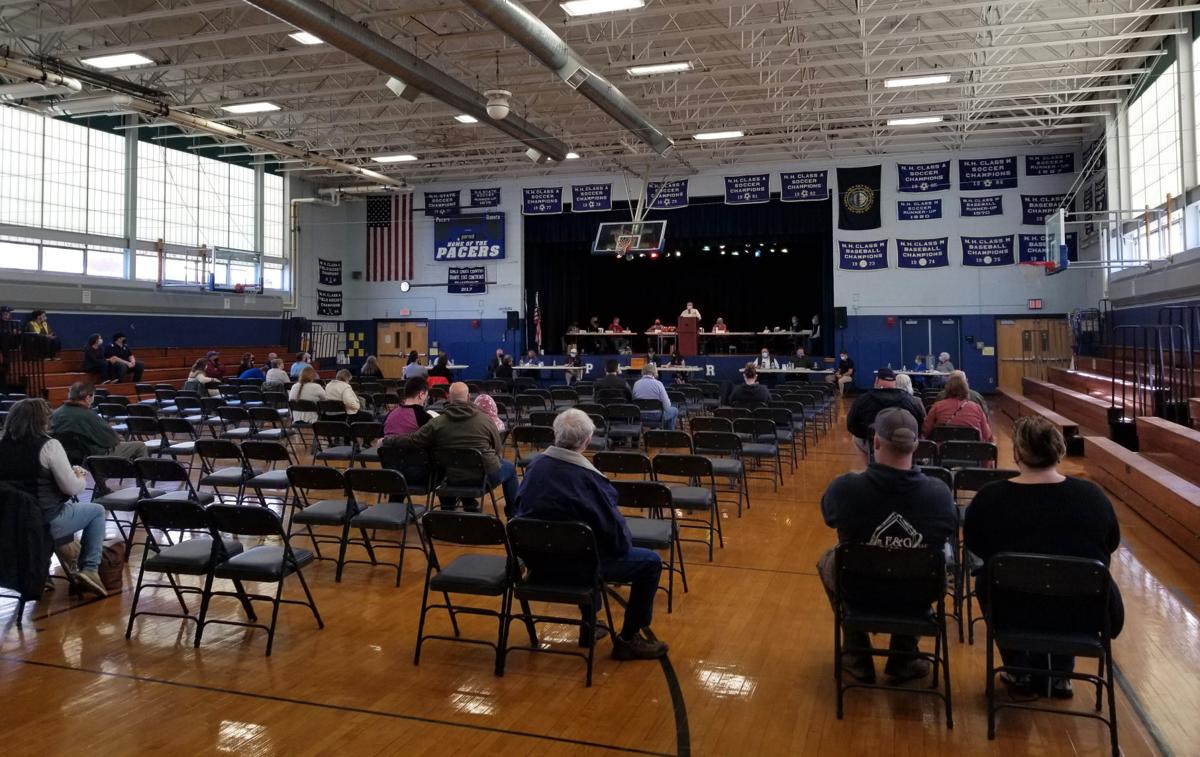 About 100 voters in all attended Hinsdale's town and school meetings Saturday at Hinsdale Middle/High School, where they approved all articles on the warrants, except for one on the town warrant that would have funded a project to reconstruct School Street. 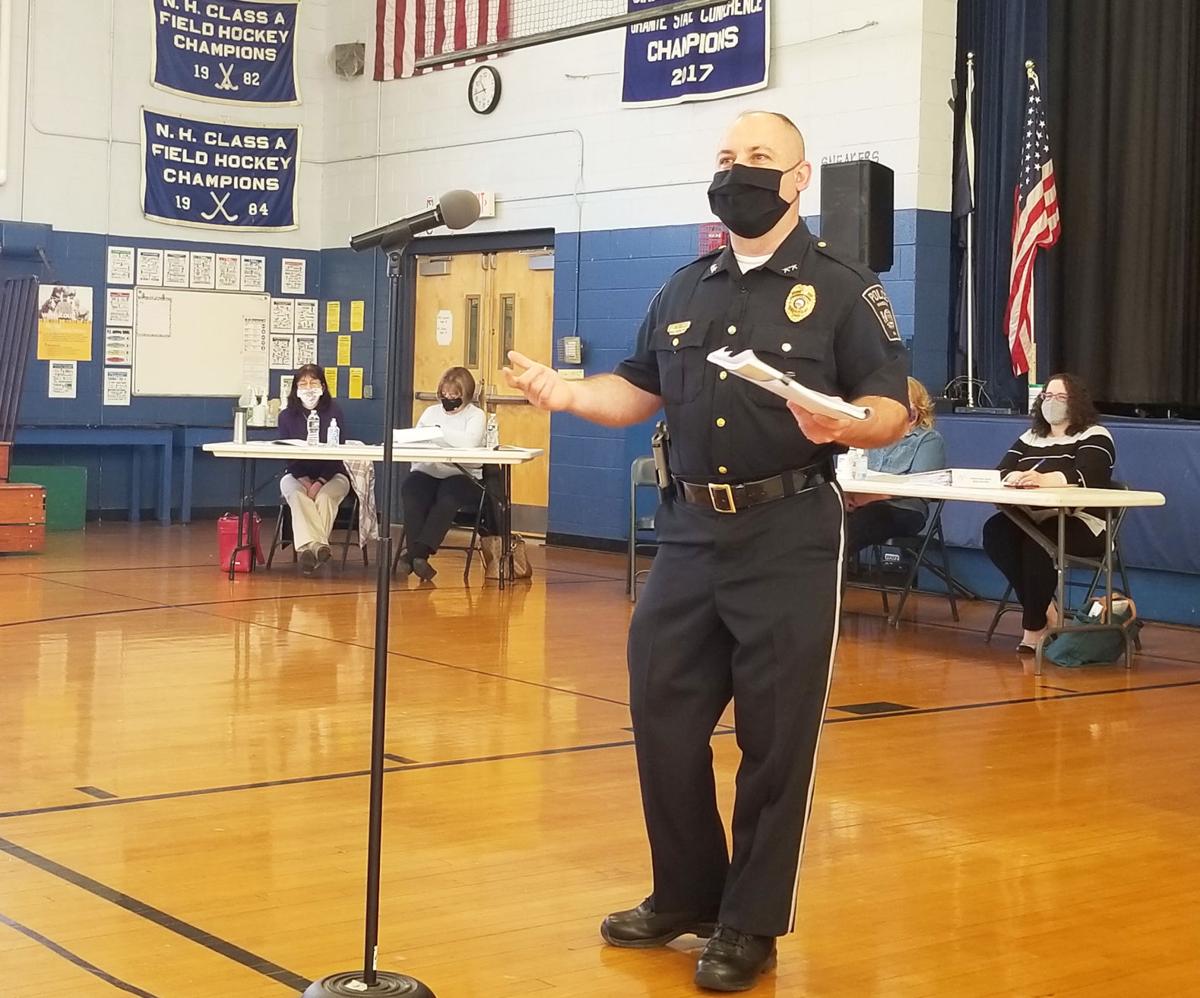 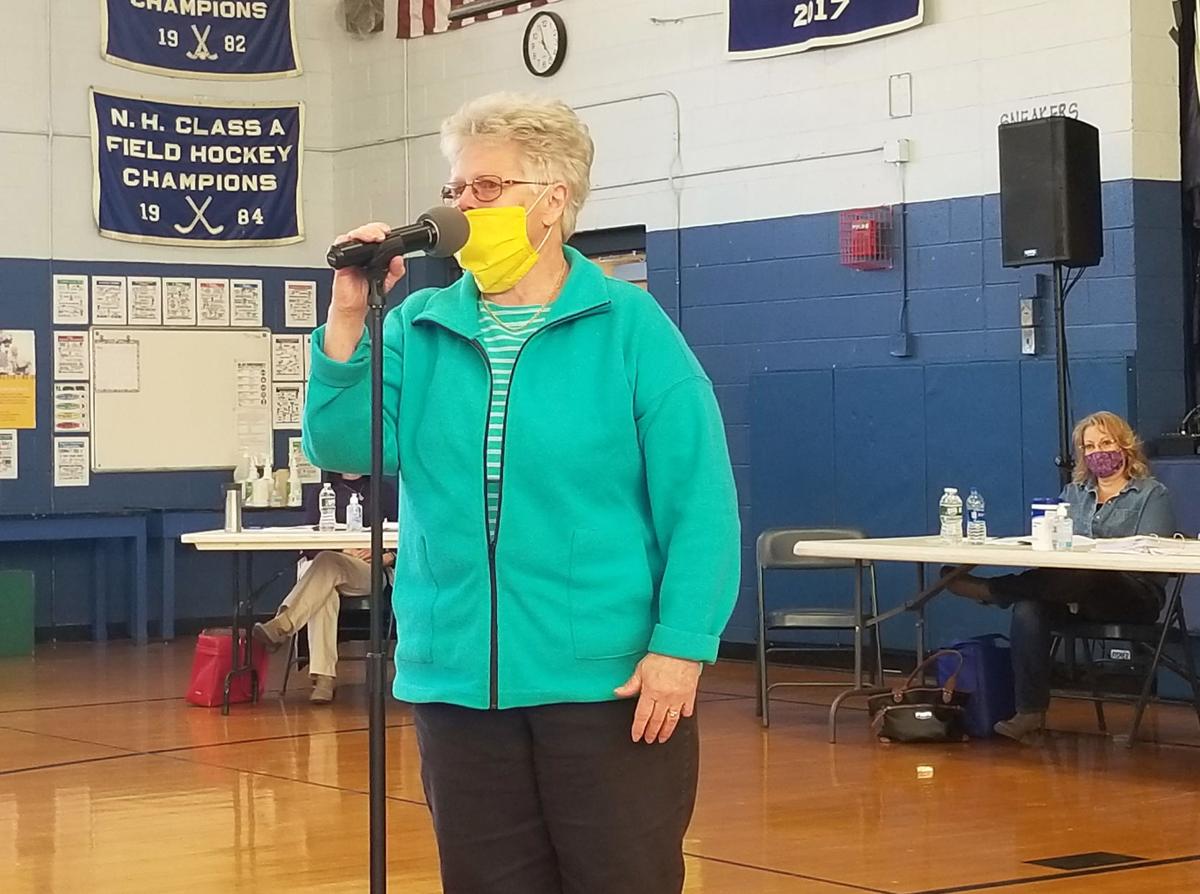 Sharron Smith, vice president of the Hinsdale Historical Society, speaks in favor of a warrant article to provide the group with $15,000.

About 100 voters in all attended Hinsdale's town and school meetings Saturday at Hinsdale Middle/High School, where they approved all articles on the warrants, except for one on the town warrant that would have funded a project to reconstruct School Street.

Sharron Smith, vice president of the Hinsdale Historical Society, speaks in favor of a warrant article to provide the group with $15,000.

But at the town session, voters rejected a warrant article that would have funded the reconstruction of that road, which runs through the heart of the school’s shared campus with Hinsdale Elementary School. The article, which required a two-thirds majority but failed by a ballot vote of 40-44, was the only one defeated during either of the meetings.

The School Street project would have cost an estimated $852,000, though the bulk of that money — $681,600 — would have come from federal grants through the Transportation Alternatives Program, with another $50,000 withdrawn from an expendable trust fund established for School Street improvements. The town would have borrowed up to $120,400 in bonds to complete the project, contingent upon the town receiving the grants.

Residents who spoke against the project said it’s not absolutely necessary, and it would be too costly for taxpayers whom they believe are already overburdened.

“That kind of money coming from the federal grant sounds like a great deal, but it’s still a lot of money for the town of Hinsdale to put into a road,” Selectman Richard Johnson said. “And I’m not convinced that we need it. ... That road has functioned for a lot of years. It continues to function today. While it might be nice, in some aspects, to have that project done, I certainly don’t put it at the top of the list.”

Donna Suskawicz, a 70-year-old resident, said she hasn’t retired yet because she needs a job to be able to afford her property taxes, noting that the School Street project would only add to her tax bill.

“For me, I’ve lost three friends in the last three months who can no longer pay the taxes, who are retired, have to sell their houses and they moved out of town,” she said. “It’s emotionally upsetting to me to see so many good people and so many neighbors and friends — my family’s been here since 1920 — to see everybody have to leave.”

Suskawicz added that she doesn’t think the town should be spending that much money on the School Street project while people are struggling financially due to the COVID-19 pandemic.

With the warrant article defeated, Town Administrator Jill Collins said Hinsdale’s grant application, the status of which wouldn’t have been decided until June, is now void. Collins added that she plans to apply for the grant again the next time it is available, likely in 2023.

In the meantime, proponents of the School Street project say the road’s current state is a safety issue for students at the district’s two schools, especially during drop-off and pick-up times.

“This road is a disaster area when there’s students leaving the school, children getting picked up, [at] basketball games, baseball games, soccer games. Someone is going to get hurt, and it’s going to be a child,” said Ann Marie Diorio, a resident who is the executive assistant to Hinsdale’s superintendent. “... We have an opportunity right now to fix a safety issue in this town.”

Among other modifications, the School Street reconstruction — which would have taken place over the next four years, Collins said — would have added several crosswalks with pedestrian safety islands and granite curbs in front of the schools.

Aside from the School Street project, the rest of the town warrant articles passed with little to no opposition, with one exception.

Hinsdale Community Development Coordinator Kathryn Lynch moved to pass over a warrant article that would have established a rail-to-trail expendable trust fund using $15,000 from the town’s general fund. After discussing the article with the budget committee and the selectboard, Lynch said she decided to pursue her request in the future instead, and her motion to pass over the article was approved.

Voters also approved a $15,000 appropriation to the Hinsdale Historical Society, a figure that was originally $10,000 on the warrant. But resident Linda Page moved to amend the article to the higher amount, which ultimately passed by voice vote. Sharron Smith, the historical society’s vice president, said it costs about $15,000 a year just to maintain Col. Ebenezer Hinsdale House, where the society is located, along with the three barns and blacksmith shop that are on the property.

The town’s $4,631,776 budget, up slightly over the $4,518,996 approved last year, passed with no audible opposition. And, in addition to contributions to various trust funds, voters also approved a pair of articles related to the town’s emergency services.

An article authorizing the town to enter into a four-year lease for two Dodge SUV police vehicles at a total cost of $88,000 passed by voice vote. The first year’s payment will be $23,950, and the town will own the vehicles at the end of the lease, Police Chief Charles Rataj said. Voters also approved raising $60,000 for the fire department to upgrade its radios.

In the school district meeting, which preceded the town session, voters approved a $14,218,291 operating budget, up less than 0.5 percent from the current year’s $14,150,937 budget. The approved 2021-22 budget is $226,663 less than the one originally proposed by district administrators, school board Chairman Sean Leary said, with those cuts coming from a variety of categories with the goal of keeping the budget flat.

Along with the operating budget, voters also approved a three-year contract with the Hinsdale Support Staff Association, which represents 36 paraprofessionals and instructional assistants, along with eight custodians and maintenance staff members. The collective bargaining agreement includes an estimated $44,465 increase in salaries and benefits for 2021-22, and a three-year total increase of $127,520.