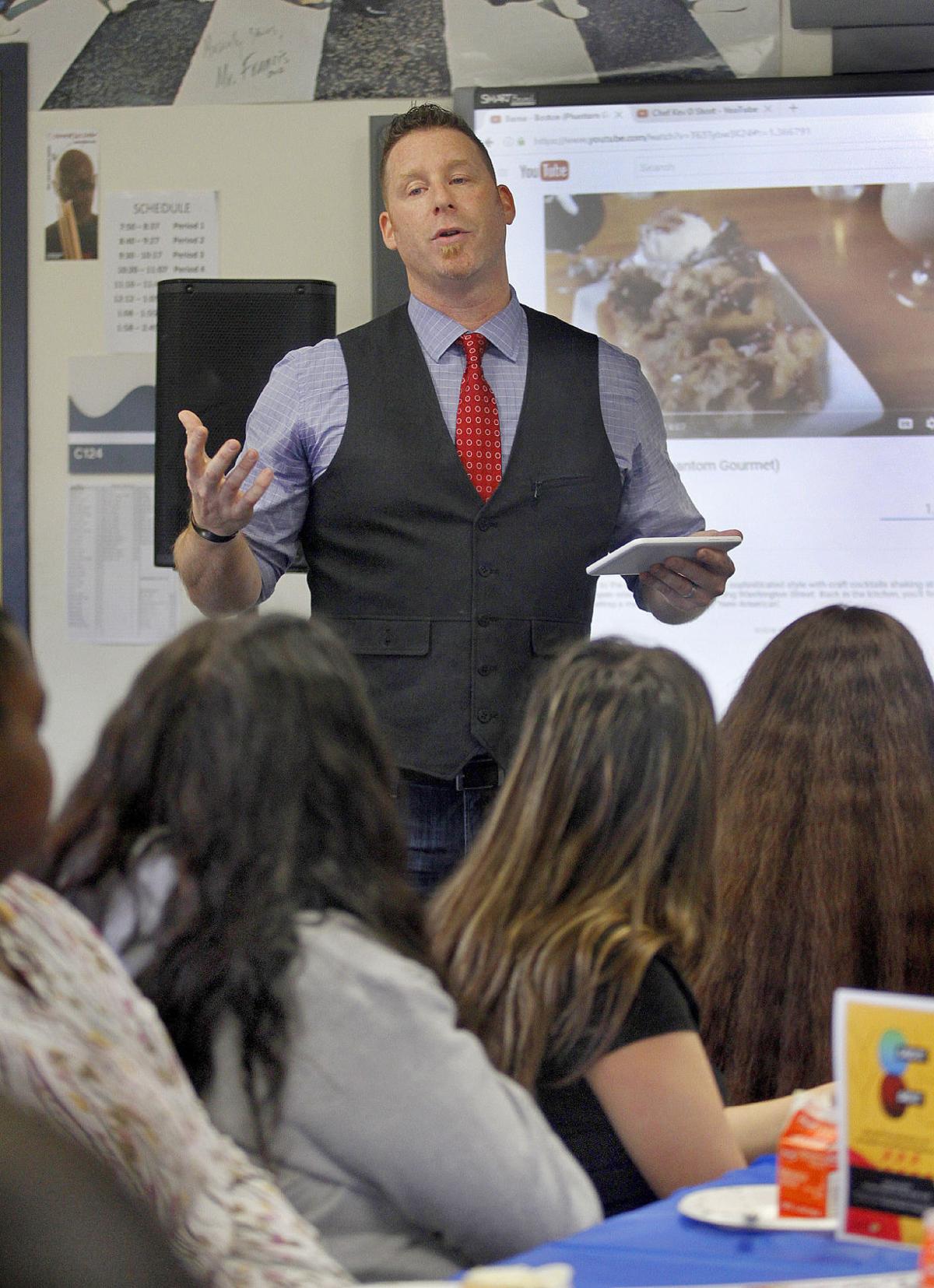 Kevin Des Chenes, a graduate of Hinsdale High School (class of ’93) and a winner in the 2015 “Top Celebrity Chef Showdown” on TV, talks to Hinsdale High students at Senior Signing Day Thursday. 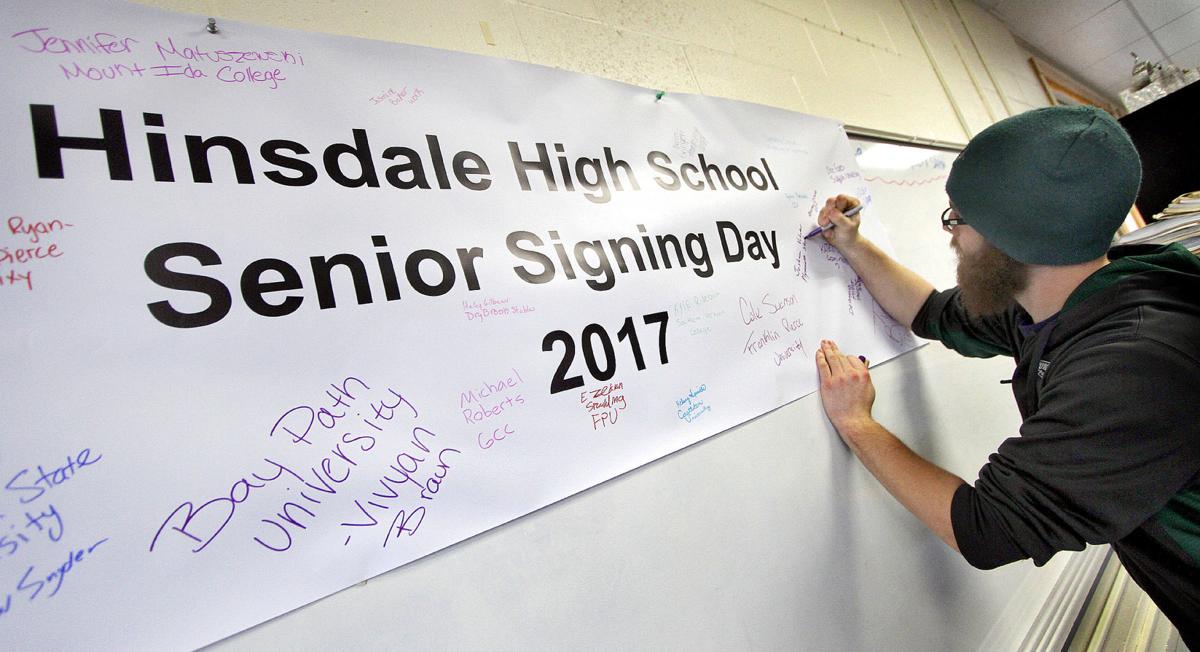 Kevin Des Chenes, a graduate of Hinsdale High School (class of ’93) and a winner in the 2015 “Top Celebrity Chef Showdown” on TV, talks to Hinsdale High students at Senior Signing Day Thursday.

HINSDALE — Hinsdale High cooked up a celebration of its past, present and future Thursday morning, a jubilee wrapped around senior si gning day and enriched by a keynote speaker who’s a proud Pacer alum.

Kevin Des Chenes, class of 1993, was a sweeper extraordinaire on Hinsdale’s vaunted boys’ soccer teams that routinely challenged for state championships. The Pacers were a juggernaut in the 1980s and ’90s, and Des Chenes was a tenacious defender.

On Thursday morning Des Chenes returned to his alma mater, not to relive his glory days, but to share his journey from soccer pitch to kitchen.

A private executive chef, Des Chenes has been featured on a number of national cooking shows and contests with renowned chefs such as Gordon Ramsey and Bobby Flay.

He was the 2015 winner of “Top Celebrity Chef Showdown,” a “chef expert” for Gordon Ramsey, a feature chef on “Chef Wanted,” and a contestant on “Beat Bobby Flay” five months ago. And that’s just a few of the shows he’s been on. He will be a judge on Flay’s show when taping resumes next month, and has his own book coming out in two weeks, “Beyond My Chef Coat.”

On Thursday he was just Kevin, mingling with seniors in Hinsdale’s music room, joined by his mother, Linda, a longtime employee at the school.

This is the second year Hinsdale has hosted senior signing day, an initiative that’s part of former first lady Michelle Obama’s national Reach Higher Campaign. Second-year guidance counselor Paula Brault put the 45-minute program together to honor the school’s 28 seniors — 26 have been accepted into higher learning institutions, although not everyone has made definitive decisions.

They wore apparel from their chosen college, and autographed a keepsake banner hanging on the wall. “They have some high aspirations, this group,” Brault said. “They’ve gotten into some really nice places.”

Kayle Hussey, president of the school’s National Honor Society, is headed overseas, where she’ll major in psychology at Richmond, The American International University in London.

“I’ve always had the idea to study abroad,” she said. “I want to see the world before I have to carry all the debt I’m taking on.”

Hussey moved to Hinsdale from Lowell, Mass., two years ago, leaving a school of 4,500 and entering a senior class of 28. She has no regrets. “Moving to Hinsdale is one of the better things that has happened as far as my school career goes,” she said.

Not all are going to four-year colleges — Tyler Blood, for instance, is already his pursuing his lifelong dream of becoming a firefighter. Five of the 28 are headed to Franklin Pierce University in Rindge, and two are bound for Mount Ida College in Boston. Hinsdale students are also committed to the University of Hartford, Castleton State and Plymouth State University, among others.

Who knows, senior Rebecca Gringeri could meet up with Des Chenes again someday. She plans to study film or television production at Hampshire College in Amherst, Mass., inspired by a class she took last year. “It’s a pretty smart group,” Gringeri said of her senior classmates.

As a student at Hinsdale, Des Chenes never dreamed he’d return as a successful chef, never mind a semi-regular on TV. He told the seniors he was more wrapped up in sports and hanging out with friends in high school than worrying about his grades.

Des Chenes majored in business at Guilford College in Greensboro, N.C., and needed a part-time job. “I started working in a restaurant to pay my way, started down that path and haven’t stopped since,” he said.

Des Chenes returned to New England as a chef, first launching 156 Bistro in Burlington, Vt.. He has since served as executive chef in several notable restaurants, including Centro Martini & McGrath’s Catering in Newport, R.I., and Boston’s Washington Square Tavern, where he was featured on the syndicated restaurant review TV show “The Phantom Gourmet.” Des Chenes showed part of that clip to the Hinsdale students Thursday.

He told the students he was “blessed” to be successful at something he loves, but it’s not luck. It takes years of tenacity and hard work, he said. “The bottom line is you have to put in the work, no matter what you do,” he said.

Des Chenes stressed the importance of not burning bridges along the way, and to be confident when confronted by the inevitable critics who will analyze their choices. “Few have a clear path,” he said. “You’re going to try a few things that click in for you, and you’re going to hit the ground running.”

“Whatever their plan is from here … they’re really tired of hearing about life after Hinsdale,” Brault said with a laugh. “They are moving on.”