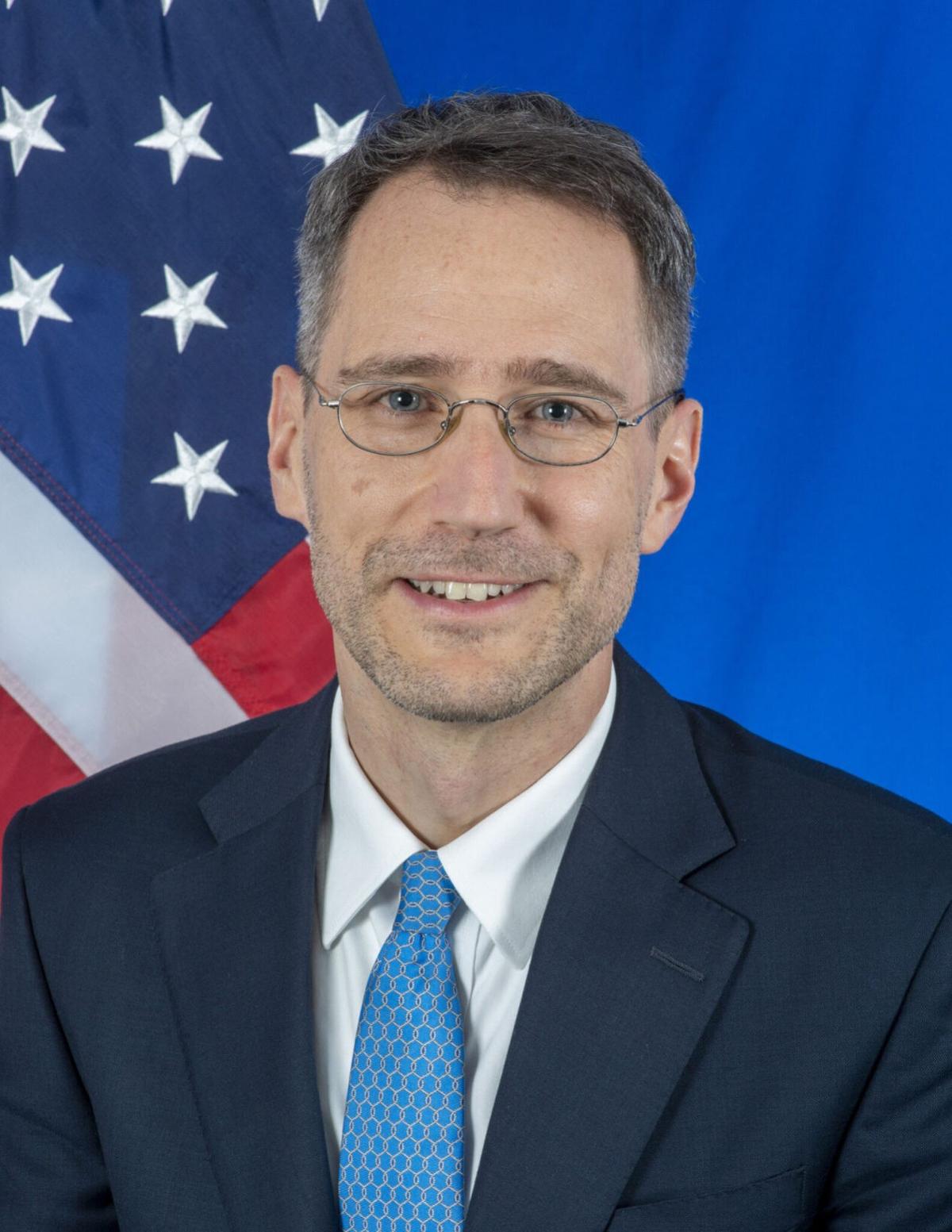 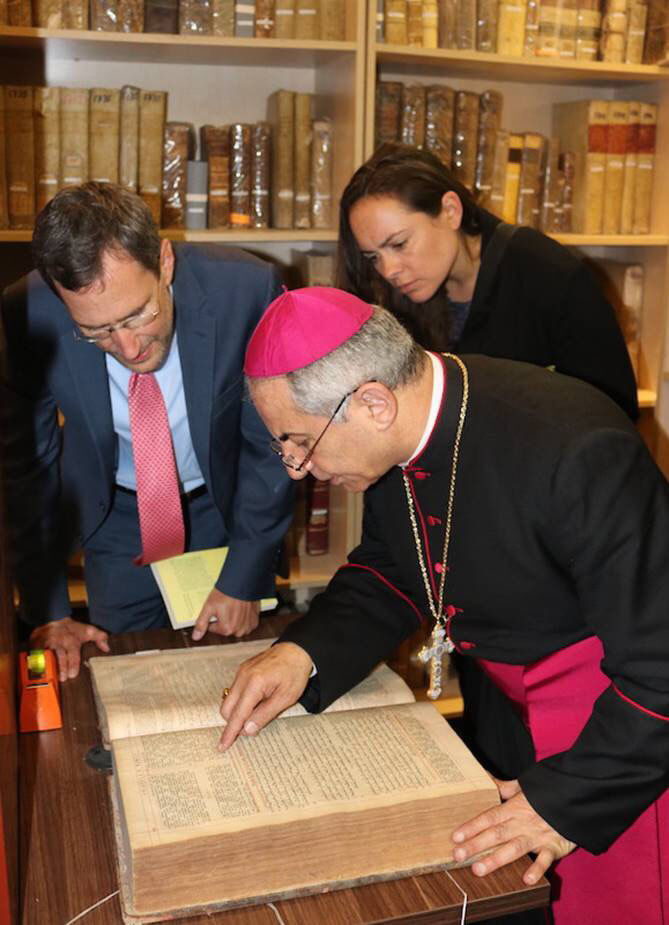 examines an ancient text rescued from the Islamic State. 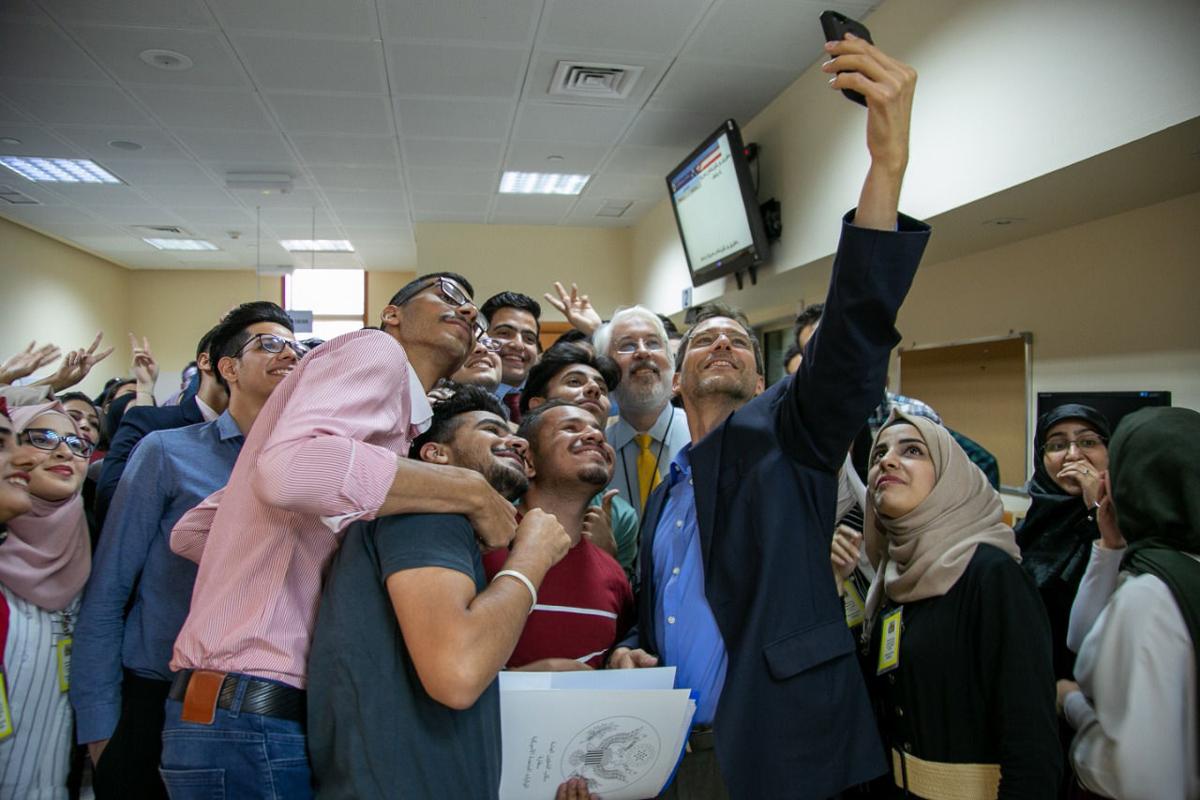 Hinsdale native Joey Hood takes a selfie with Iraqi youth headed to an exchange program in the United States in April 2019.

examines an ancient text rescued from the Islamic State.

Hinsdale native Joey Hood takes a selfie with Iraqi youth headed to an exchange program in the United States in April 2019.

Northern Iraq is a long way from home for Joey Hood, a career diplomat and Hinsdale native.

But his work there several years ago, helping the Yazidi people after they were victims of genocide under the Islamic State, is part of a broader mission inspired by his Monadnock Region roots.

Hood’s State Department postings have included stints in Saudi Arabia, Yemen and Iraq’s capital, Baghdad. But even on diplomatic assignments halfway around the world, his own community is always on his mind. He tries to go beyond the city where the embassy is located, he said, and find “the Hinsdales of the places where I serve.”

“Where are those places that nobody knows the name of? … Who’s paying attention to their voices and their interests and their needs?”

Now acting assistant secretary of state for Near Eastern affairs, Hood, 47, supervises U.S. activities and diplomatic relations in a pivotal, often volatile region that stretches from northern Africa to Iran.

Compared to his current role, Hood said his beginnings were inauspicious.

He grew up one of four siblings on Main Street in Hinsdale — which, by Hood’s admission, is “quite out of the way” — where his mother drove a school bus and later worked in the school as a secretary and substitute teacher. His father held a post office job in Vermont for around 40 years, having retired recently.

Hood’s origins in the Monadnock Region date back generations: His maternal ancestors, Polish immigrants, moved to Brattleboro and Hinsdale to work in the mills, he said. His paternal grandfather relocated to Chesterfield from Maine, having found work at a farm on Route 63, where he met his future wife, Hood’s grandmother.

Growing up, Hood held a number of odd jobs, including a newspaper route for The Sentinel and at small stores in the area — among them, a bygone bakery on Winchester Street in Keene.

Even at a young age, he aspired to leave the region for a life overseas. Hood said he bought old French books at yard sales, thinking that “to be educated … meant to speak French,” and also began receiving instruction in the language in 3rd grade as part of a program led by local high-schoolers.

“I didn’t know what a foreign service officer was, or even a diplomat or anything, but I definitely saw myself as somebody who was going to travel the world and go to big cities,” he said.

Attending school in Hinsdale, which unlike many Granite State communities doesn’t send students to a regional high school, helped Hood grow academically, he said — though he didn’t recognize it at the time.

“I spent 13 years with the same group of kids, and we didn’t get thrown into some larger pond somewhere,” he said. “… I think that gives … students a lot closer relationships with their teachers, who are often their neighbors.”

Those teachers encouraged Hood to continue his education after high school, and he credits them for normalizing that path since nobody in his family had been to college. Hood attended Dartmouth College in Hanover — an unlikely setting for someone with middling test scores and from a household of modest means, he said — where he briefly considered studying psychology and government before settling on French.

“There came a moment in college when I had to decide either sink or swim,” he said. “I decided to swim because there really wasn’t an alternative.”

Hood realized after a couple terms, though, that he was keeping up with his more privileged classmates.

He considered going to graduate school to become a French teacher but instead turned to public service, which he said was attractive because it would allow him to make a tangible impact.

After graduating in 1996, Hood went to Burkina Faso, a francophone nation in West Africa, and taught English on a Fulbright scholarship. As part of the year-long program, he studied how the local education system had evolved from its colonial origins.

Hood also met his wife, Anne, in Burkina Faso, where she was studying at the time. The couple returned to Hinsdale after his scholarship and got married shortly thereafter.

While pursuing a master’s degree from The Fletcher School of Law and Diplomacy at Tufts University in Medford, Mass., Hood earned a scholarship offered by the State Department. After a summer internship at the agency, he went to work there full-time after graduation.

For his first posting in the foreign service, in 2001, Hood selected the U.S. embassy in Riyadh, Saudi Arabia, from a list of options because “it just sounded interesting and like the sort of place I never would be able to go otherwise.”

Months later, the Sept. 11 attacks put a spotlight on the Middle East and particularly Saudi Arabia, where most of the hijackers were from. After initially being assigned to work with the Saudi government on military and security contracts, Hood pivoted to working to gain Saudi support for the U.S. wars in Afghanistan and Iraq, he told The Sentinel in 2012.

Hood said his most difficult assignment came several years later, when he was posted in Eritrea, a small East African country that had declared itself self-sufficient, blocking imports and rejecting foreign aid at the time. In the face of widespread food scarcity and human rights abuses, Hood said, American diplomats struggled to work with Eritrean officials to address the situation.

“It’s a government with which we do not enjoy close relations,” he said. “Any time that’s the case, there’s a lot of suspicion [and] there’s not much that we can get done together.”

Since then, Hood has been posted at U.S. missions in Yemen, Saudi Arabia again, Kuwait and Iraq, also spending two years at the State Department’s Office of Iranian Affairs in Washington, D.C. — all with Anne and their children, Fiona and Henry, in tow.

Diplomatic work, he said, should help local residents as well as people back home.

“The more stable the area is, the less we need to get involved militarily,” he said. “The more prosperous it is, the more exports we can sell.”

Hood has helped run the agency’s Bureau of Near Eastern Affairs since 2019. In his interim role as acting secretary, which he assumed when President Joe Biden was inaugurated in January, he is helping guide the State Department through its transition from the Trump administration.

“It’s already emerging that we’ve got some new approaches to places like Yemen, Saudi Arabia, Iran,” he said. “I’m just delighted to be playing a role and helping move those along.”

Hood, who never intended for his career to focus on the Middle East, said the region is critical because it contains busy shipping routes, vast energy resources and delicate geopolitical feuds.

Too often, Hood said, the United States is seen as a destructive force in the Middle East. To avoid that criticism at home and abroad, he said officials must stop using dollar figures and troop totals to describe operations and instead focus on projects that have helped local residents, like building schools and cleaning a community’s water supply.

“People … don’t want to know what a fiscal year is or how many dollars you spent,” he said. “They assume that you just gave that to the corrupt government that they might be unhappy with.”

Hood said he’s especially proud of his work with the Yazidis and Iraqi Christians, who were also persecuted by the Islamic State.

“If there’s any reason that the United States should exist and have an active foreign policy, that’s what it is,” he said.

Hood will step down from his role when a new assistant secretary of state for Near Eastern affairs is confirmed by the Senate. (The Biden administration had not yet nominated someone for that role as of Monday, he said.)

He intends to remain with the State Department and said he would welcome serving overseas again as an ambassador.

While spending much of his life abroad, however, Hood said he often feels the instinct to return home.

Most of his siblings and cousins live within 10 miles of each other in the Monadnock Region, he explained. Hood and his wife also own a house in Keene, where he lives when he’s not in Washington, and their kids have gone to summer camp at Stonewall Farm in Keene and Camp Takodah in Richmond and now attend school in Plymouth.

“There’s nothing stranger to me than when I ask colleagues where they’re from and they say, ‘Well I’m not really from anywhere anymore,’ ” he said. “… I feel sad for them. I think we all have a richer existence when we call someplace home and we care about what happens to it.”

At a glance: Joey Hood