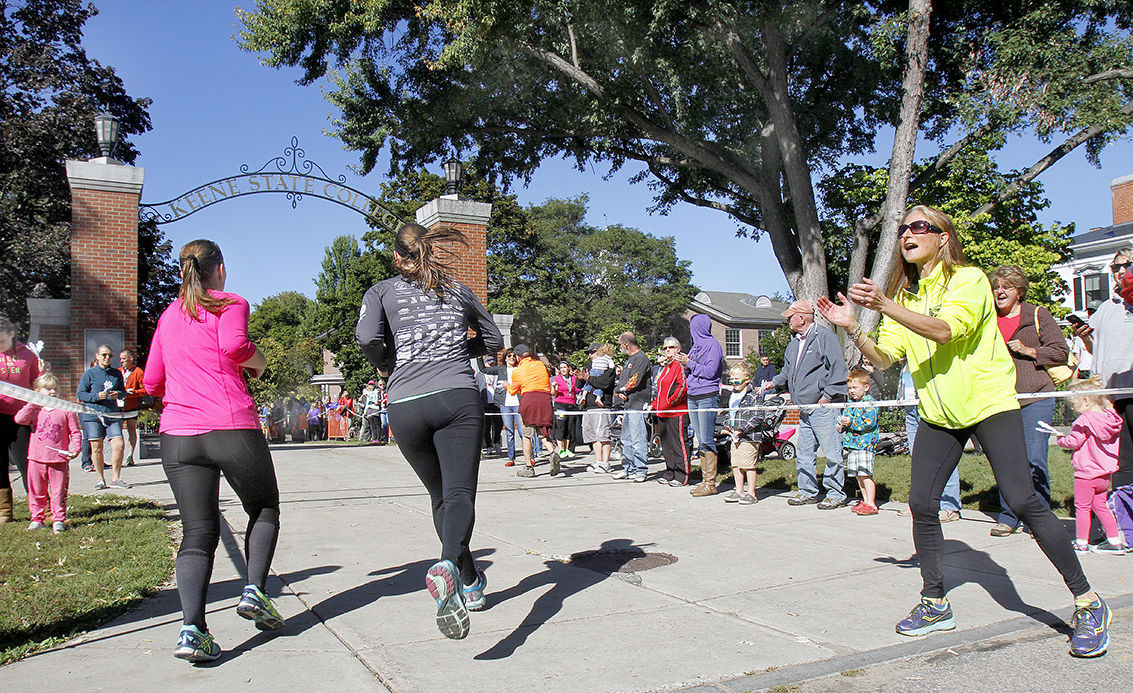 Maria Oberlander shouts encouragement as two runners turn the corner onto Appian Way at Keene State College for the final couple of hundred yards in Sunday’s Clarence DeMar Half Marathon. 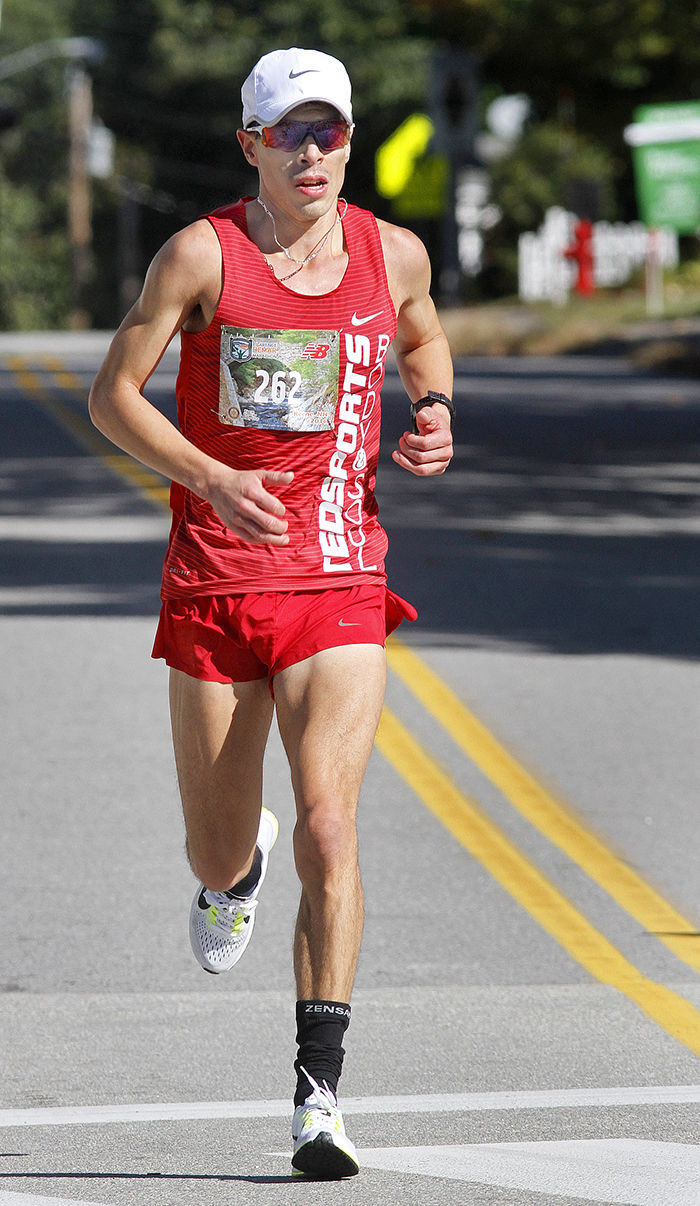 Thomas Paquette of Keene was poised for a victory Sunday, but a bout with late-race cramps derailed his chances to win.

Maria Oberlander shouts encouragement as two runners turn the corner onto Appian Way at Keene State College for the final couple of hundred yards in Sunday’s Clarence DeMar Half Marathon.

Thomas Paquette of Keene was poised for a victory Sunday, but a bout with late-race cramps derailed his chances to win.

Tim Congdon, better than anyone else at Sunday’s DeMar Marathon perhaps, can appreciate the revival of this day, the success story that has sprouted from the timely insertion of new energies and a fresh vision into a tradition-bound event that had begun to languish.

He watched from the finish area with hundreds of others, music blasting from raised speakers, fans craning for a glimpse of their friend or family member as they turned, for the final time, onto Appian Way, bells ringing, clappers clapping.

Not that long ago, you need to understand, the DeMar Marathon was losing oxygen, its breaths labored, its future in doubt.

That had to pain Congdon, who ran the first seven DeMar races before “getting roped into” helping to produce it each fall for the next 20 years.

His heart had to feel good Sunday.

“We were trying to hold on; we felt it slipping away,” Congdon recalls of the event as it began to experience less-than-sparkling times. “What the Rotary has done is amazing. From the time they grabbed it, they have taken it so much further than anyone could have thought.”

Basically, Congdon says, the DeMar began as an event for runners put on by runners. “I remember recruiting people out of the crowd to man water stations; that’s how it was,” he says.

Congdon was a collegiate sprinter. Later, he took up distance running. “I enjoyed the miles,” he says. At 61, his running days are over, however; he walks somewhat comfortably thanks to two artificial hips. But he took pride Sunday in watching his daughter run. Like the hundreds of exuberant onlookers, he, too, was drinking in the blissful rebirth of an event that for nearly four decades has been a community treasure.

Today, we’re here to officially report, it is as healthy and fit as ever.

No small accomplishment, either.

Five hundred volunteers were part of the team behind Sunday’s festival of races — a full marathon, a half marathon, and smaller fun runs for seniors and children.

More than 700 runners registered for the full and half marathons; 647 finished. They represented more than 40 states, including Hawaii, and several countries, including France, Jamaica and Canada, race director and Keene Elm City Rotary member Alan Stroshine said.

Hundreds more children and Super Seniors — people over the age of 70 — also completed their events.

Competitors ran with varied expectations; all who finished, to be sure, did so with a like sense of fulfillment.

“It’s emotional; a great feeling,” Brett Russell, 34, of Alstead said minutes after his 26.2-mile run, still chewing a small piece of gum. “I trained hard for this one and I was able to walk after it was over this time. It’s a complete-body high.”

A tree worker, Russell took up running in an effort to get healthier. Sunday was his second DeMar. Despite his improvement, he missed the qualifying standard for Boston by one minute. It didn’t lessen his smile. He’ll take another shot at it next year, a new age group, a new bar to meet.

Jill Bond, 61, of Keene, running her second DeMar half marathon, said, “It’s really amazing to run where you live. It means you are going to see people you know, and to train with people you know. Everyone is so supportive; it’s a win-win.”

The Keene Elm City Rotary Club rescued the DeMar in 2012, and quickly turned what it hoped would be its signature fundraiser event into its signature community service project, too, Stroshine said.

DeMar also taught at Keene Normal School, now Keene State. He was 41 when he won his final DeMar, in 1930.

It was that legacy that drew David Nemoto of Houston, Texas, to the Elm City Sunday. Nemoto, 53, is seeking to run a sub-4-hour marathon in all 50 states. Check off New Hampshire. It was No. 47 on his list, and marathon No. 104 overall. “Clarence DeMar is steeped in marathon history; why wouldn’t I come here?” Nemoto said. “To run in a place where he lived, it’s inspiring, and it’s nostalgic, too.

“I’ve run races in a lot of places, obviously. This was such a nice marathon; small, of course, but great people, lots of scenery; really nice.”

Stroshine said the early race feedback, much of it appearing on social media, is positive. “From a runner’s standpoint,” he said, “I’m confident we deliver an exceptional experience. It’s a high-energy, emotional event, with some touches you don’t see at other marathons.”

That includes himself and Ted McGreer announcing over the PA system each runner’s name and where they’re from as they prepare to cross the finish line, whether it was one at a time, or a pack of four. They make it look simple; it’s not. And on Sunday, there was Cheryl Belair, a local business owner and civic volunteer, dancing and clapping and jumping and leading the cheers in the same area, assuring that no runner’s final approach was left without a crowd response.

The marathon winner, Neal Graves of Stowe, Vt., said the beauty of the DeMar, and running more generally, goes deeper than that.

“This race accommodates all levels,” he said. “And the community comes out for it; people were cheering from their homes.

“Running is a time-effective way to get in shape, and it gives everybody, no matter their ability, something to shoot for.”

Running, too, is an expressive sport. There are no dull colors; bright rules. One male runner crossed wearing blue jeans; another runner went the half marathon distance in thin leather sandals for footwear. Some crossed the finish line with hands raised high, some tripped the clock in gleeful dance.

There were blisters to endure, cramps to fight off, and doubts about going on to overcome.

Lauren Waterman of Keene finished third overall among women in the half marathon, despite coming off a recent injury. She qualified for Boston in May, at a marathon in Providence, R.I., then was set back by an injury. She cut back her running in June, July and August. She registered for the DeMar on Friday. “I didn’t know what I was capable of at that point,” the 38-year-old mother of two said. “Technically I wouldn’t call myself a racer. My running partner, Michelle (Gates), pushed me through today.”

Gates, also of Keene, finished fifth among the women.

Carli Davis, 21, a Keene State College senior from Chester, N.H., was the women’s half marathon winner. A nutrition major with much of her focus on trying to secure a critical internship, she’s otherwise “crazy busy” with school. She said she surprised herself with the win, drawing on the support of everyone around her. “I sort of let running take me wherever it goes,” she said. “Today I just got into a rhythm. I ran with these amazing guys at one point. I think they were Australians, maybe; they had cool accents. Then I just broke off and found a good pace.”

Davis, a Pinkerton High grad who didn’t start running until her senior year in high school, averaged 6 minute and 45 second miles, winning by more than two minutes over the race runner-up.

For veteran area runner Jerry McDougle of Walpole, who is 61, he’s had better days than Sunday’s half marathon. For no particular reason, he said, it was a difficult race. “It just didn’t happen today.”

But, like Congdon, he knows the full history of this event, and he said the declining number of entrants is what had made the event hard to sustain.

“The (DeMar) half marathon is real popular,” he said. “All over the place, I think you’d find it’s one of the hot items (in running).”

A 40-year-old teacher who directs the orchestra at Keene High and teaches string instruments in area schools, Amanda Paul does functional dynamic training at an area gym. She moved to the region 14 years ago from Indiana. On Sunday, the Swanzey resident barely looked winded after a strong half marathon run. She had planned on doing the full marathon, but a hip injury midway through the summer caused her to scale back.

What got her through Sunday?

“The people,” she said. “When I hit mile 10, near the cemetery and Franklin School, there were a lot of people there cheering, making noise and propelling you on. It gave me a big push when I needed it.”

“I’ve been volunteer for DeMar 15, 20 years,” Stroshine said. “I’ve always thought it could be more than it was. Our intention was to build on its success and make it more visible, more community-focused. It has blossomed into what I thought it could be. ... It’s the kind of intrinsic piece of community you feel when you’re a part of something around here.”

Streets and hearts are full again in September. It’s all good.