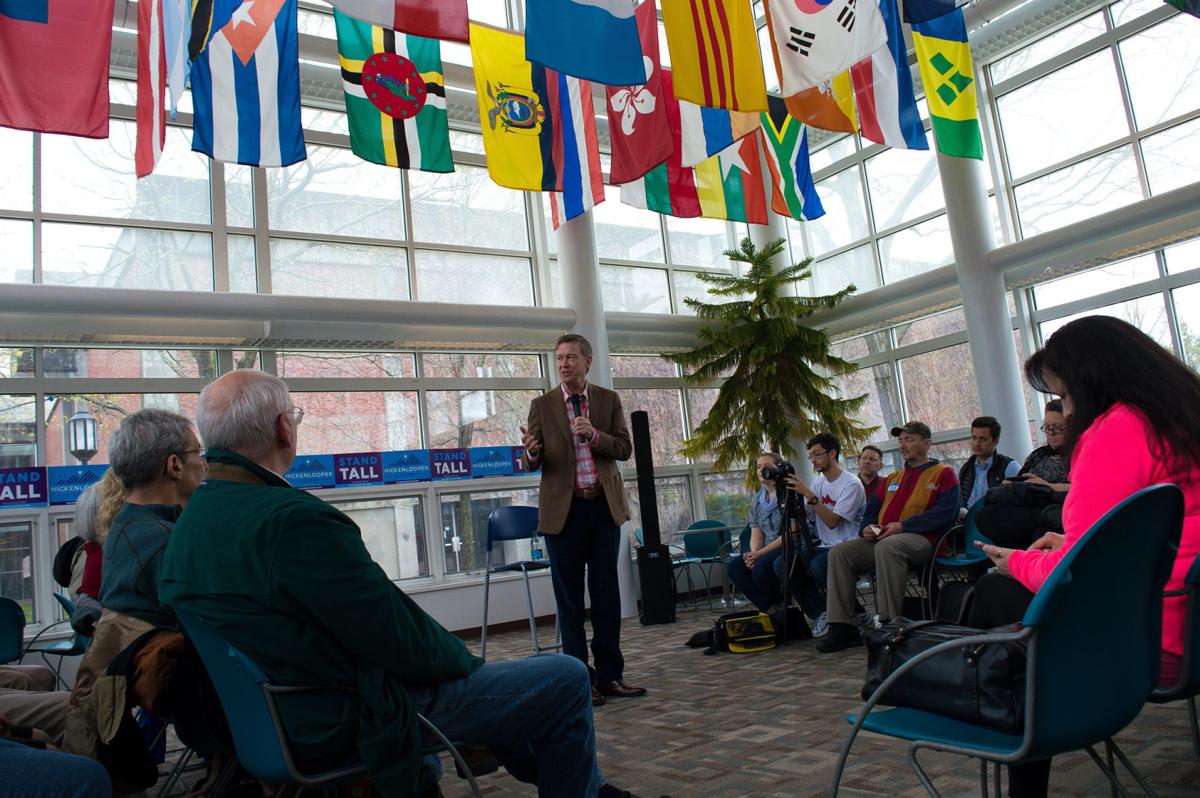 Drawing from his past experiences as Colorado’s governor, Denver’s mayor and the co-founder of a brew pub company, John W. Hickenlooper laid out his case for becoming the Democratic presidential nominee in front of a few dozen people at Keene State College Saturday.

Hickenlooper served two terms as Denver’s mayor, from 2003 to 2011. In 2010, he was elected governor, only the second Denver mayor to take the seat. He won re-election in a tight race in 2014 and ended his tenure in January after hitting the two-term limit.

Hickenlooper said the state went from 40th in job creation at the beginning of his tenure to the No. 1 economy in America for the past two years. He convinced all 34 Colorado mayors — including 21 Republicans — to support a tax increase to build a light-rail system, he said.

A geologist by trade, Hickenlooper was laid off in the 1980s when his company was sold and his industry tanked. He said he was unemployed for two years and found no luck getting another job in geology. Instead, he and several business partners founded the Wynkoop Brewing Co. in 1988, which grew to encompass 14 pubs over the years. Hickenlooper sold his stake in Wynkoop in 2007.

“In small business, you know, there’s no margin, there’s no profit in having enemies. You never let someone leave your restaurant when they’re really angry,” he said. “Politicians, on the other hand, love to have opponents that they can attack by having an enemy to pull themselves up from the polls.”

Before his visit to the Monadnock Region, he delivered a speech Friday at the N.H. Institute of Politics at St. Anselm College in Manchester and outlined his “national strategy for a working America.”

For students, he proposed free community college for “those who can’t afford it,” student loan debt relief and expanding apprenticeships and skills training programs.

He also plans to rebuild infrastructure across the country, which will provide jobs with an emphasis on clean energy, he said, and to bring broadband access to every county in America.

At Keene State, Hickenlooper emphasized the importance of bringing opposing sides together to solve problems, which he said he has a track record of doing, from environmental to infrastructure issues.

But Stephanie Scherr of Fitzwilliam asked Hickenlooper why environmental advocates should compromise with the fossil fuel industry when moving away from fossil fuels is a priority.

“Mother Jones magazine called you ‘John Frackenlooper,’ ” — the candidate laughed — “and you took a slurp of frack wastewater, I can only assume to show that it’s not toxic,” Scherr said.

She was referring to a 2011 incident that made headlines when Hickenlooper mentioned it in 2013 testimony about improvements in the oil industry before a Senate committee.

Hickenlooper told Scherr he was in a meeting with executives of Halliburton — an oil field service company that’s been the subject of several controversies — to discuss methane regulations. They didn’t trust him, he said. Then they pulled out a test model of a fracking fluid made of FDA-approved, food-grade materials.

“And I said, ‘Well you’re not expecting me to drink that, are you?’ And the CEO took the bottle and took a swig, and said, ‘You don’t have to drink but I’ll show you, it’s perfectly safe,’ ” Hickenlooper said.

At that moment, he said he decided to take a swig to earn their trust. The bigger picture, he said, is that he brought both sides to the table and secured the regulations, which mandated camera installations to help prevent methane leaks.

However, in accounts from 2013, he framed the decision not as an act of compromise, but as something comical.

He told the Senate Committee on Energy and Natural Resources: “We did drink it around the table, almost ritual-like, in a funny way.” Hickenlooper described it similarly in interviews with multiple outlets in 2013. He told the Denver Business Journal that he asked the CEO “if I could take a swig. He asked me if I was serious. I said yes.”

Overall, Hickenlooper stressed the importance of coming together for environmental issues.

“I have a greater sense of urgency than just about anyone I know about climate change,” he said. “... I think our challenge is not figuring out what we should do. … We know what we have to do. What we need is the will and the persuasion to get everyone on board fast and in real time.”

On health care, Hickenlooper expressed a need for reform, but unlike other Democratic candidates, he doesn’t support the “overnight or immediate transition to Medicare for all.” He said statistics show more than 100 million Americans are satisfied with their current coverage.

Instead, he said, he’d like to see a public option with a sliding scale. Once Medicare grows, costs will decline and eventually it will become a version of Medicare for all, he said. At the same time, he said he plans to further regulate the insurance and pharmaceutical industries to keep those costs down.

While not directly answering her question, he agreed that the war on drugs made already difficult lives harder by labeling young people felons.

Hickenlooper pointed to Colorado’s legalization of recreational marijuana, the first state to take that step, in 2012.

“And I was terrified of that,” he said. “I was originally against it, because as a governor you don’t want to be in conflict with federal law.”

He had concerns about increased teenage consumption and people driving under the influence. But the state invested in education efforts and conducts wide-reaching health surveys, he said, and he hasn’t seen those negative consequences play out.

After the event, Hickenlooper told The Sentinel he plans to return to the Monadnock Region. He’s been here before — his cousin’s family lives in Walpole.

In the end, he said he expects his breadth of experience to speak for itself.

“I think people in states like Iowa and New Hampshire and South Carolina … are dominantly pragmatists,” he said. “And I think I really have an opportunity to kind of make the case: I’ve done it.”