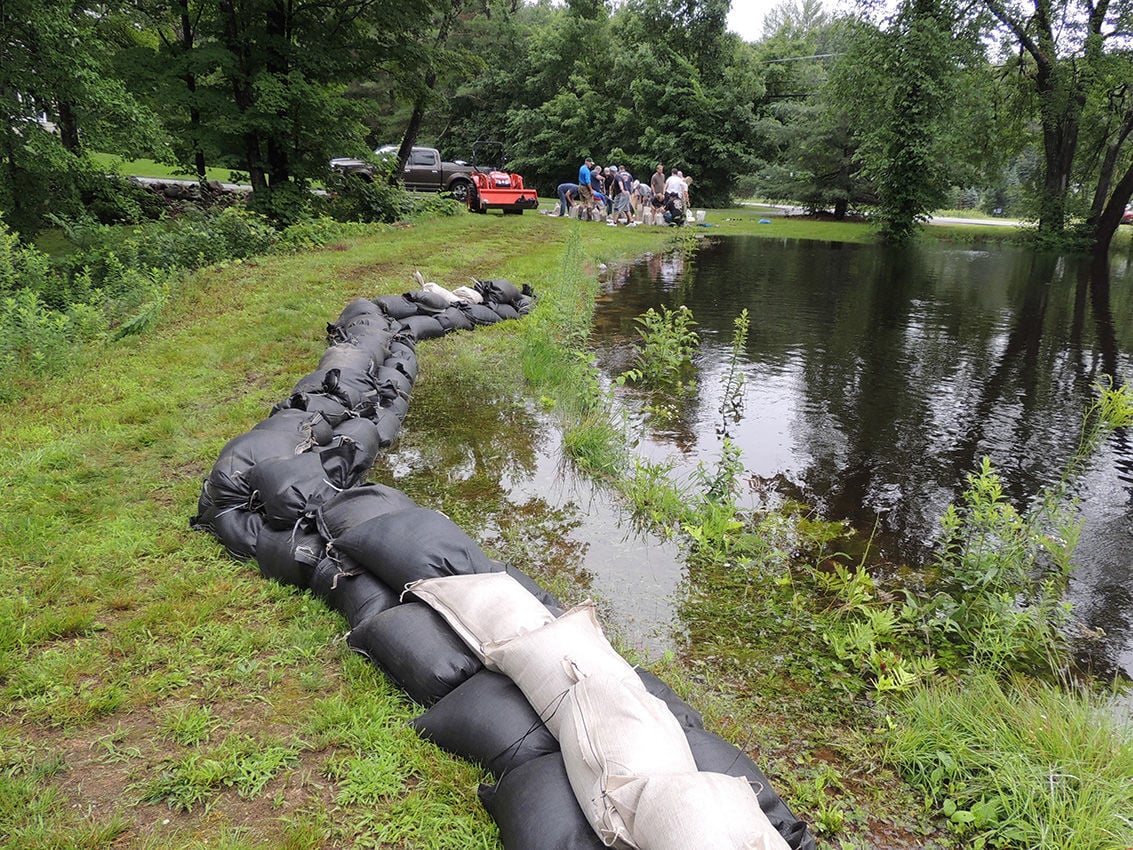 Forest Lake in Winchester rose 7 inches above its 50-year storm height of 31 inches Sunday, according to the Forest Lake Improvement Association. 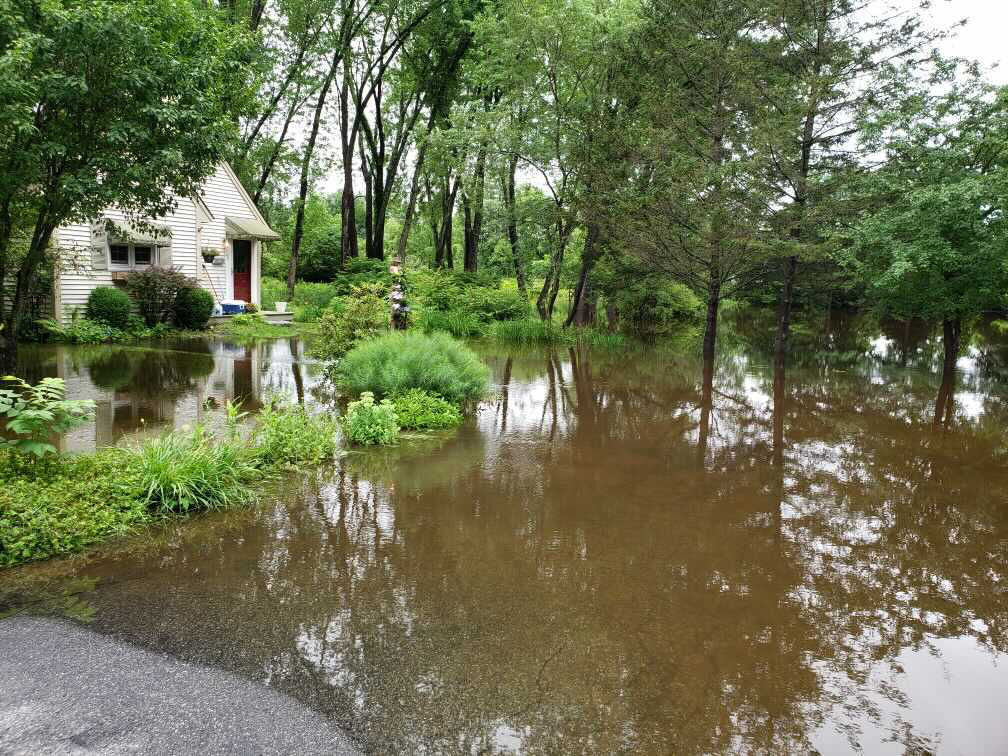 Boston Place in Keene on Sunday, where one person evacuated due to flooding, Keene Fire Chief Mark Howard said. 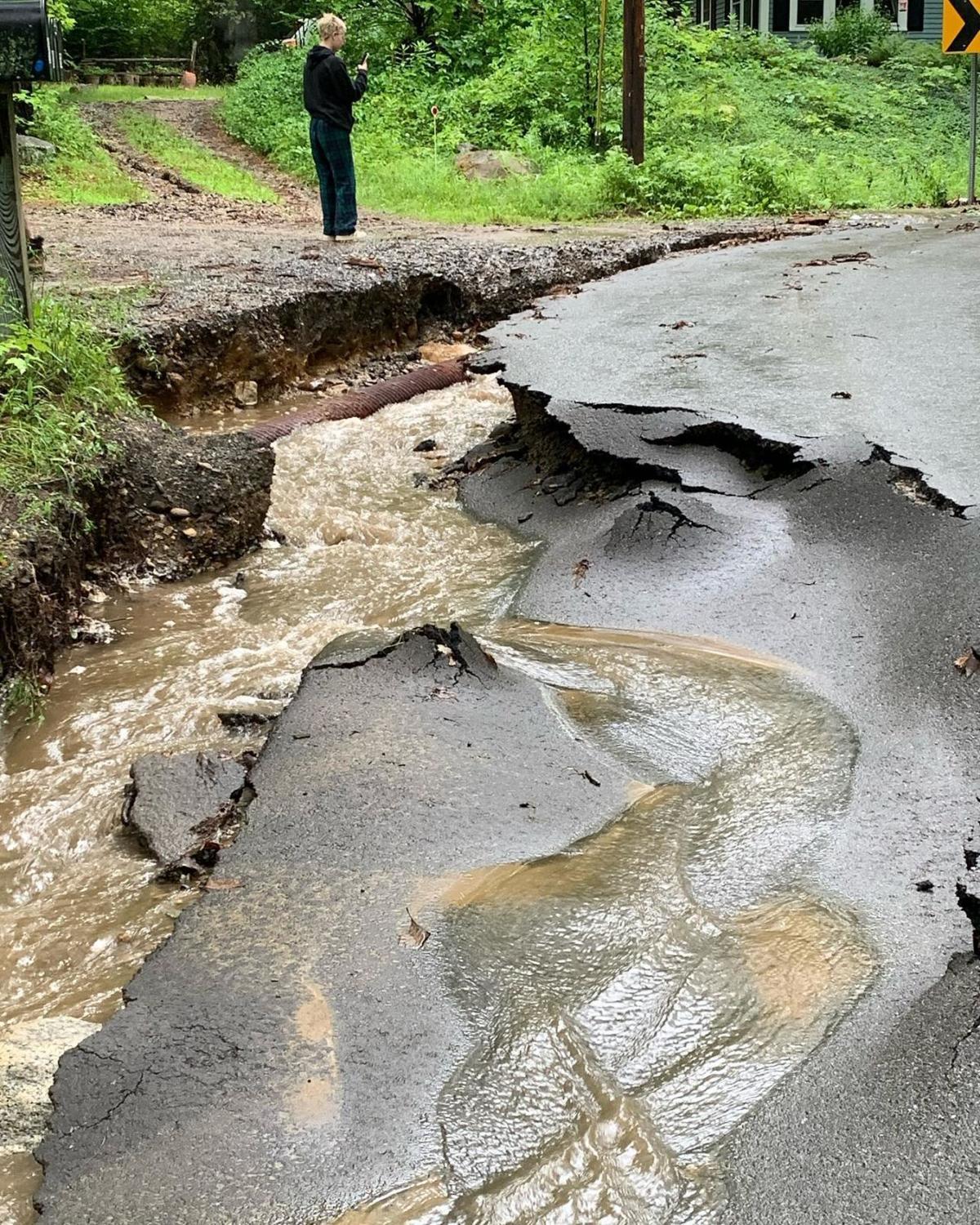 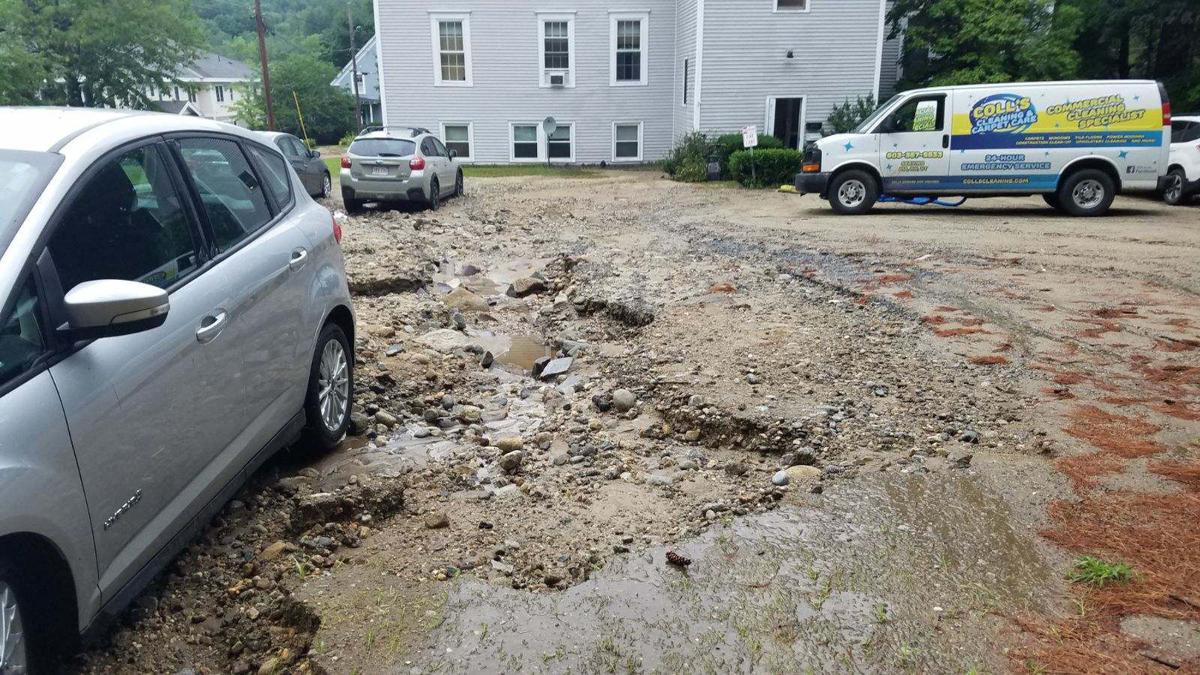 Damage from flooding on School Street in Marlborough. 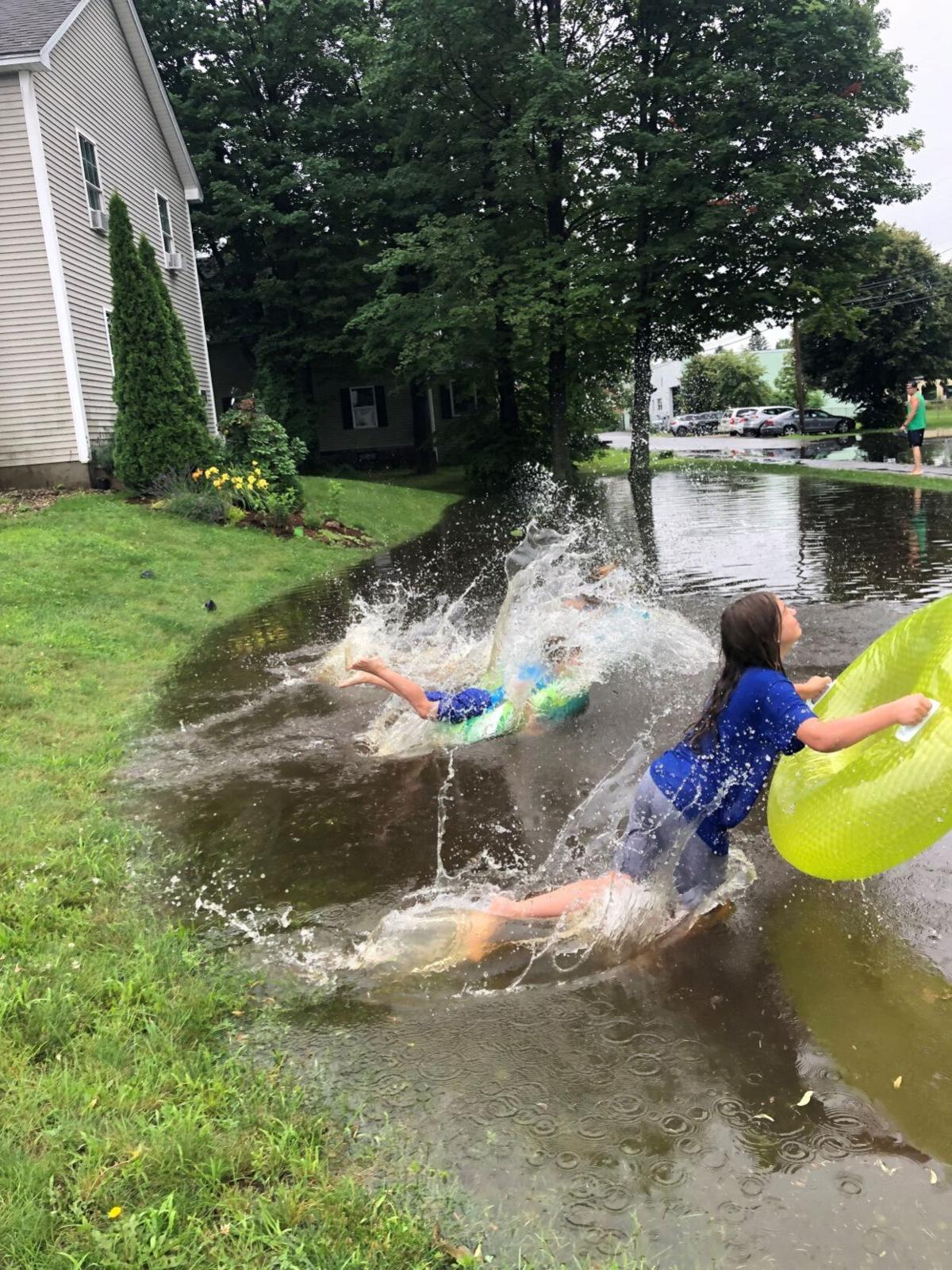 Tessa Ash-Norton, 11, and Sawyer Ash-Norton, 9, take advantage of the flooding on Carpenter Street in Keene Sunday. 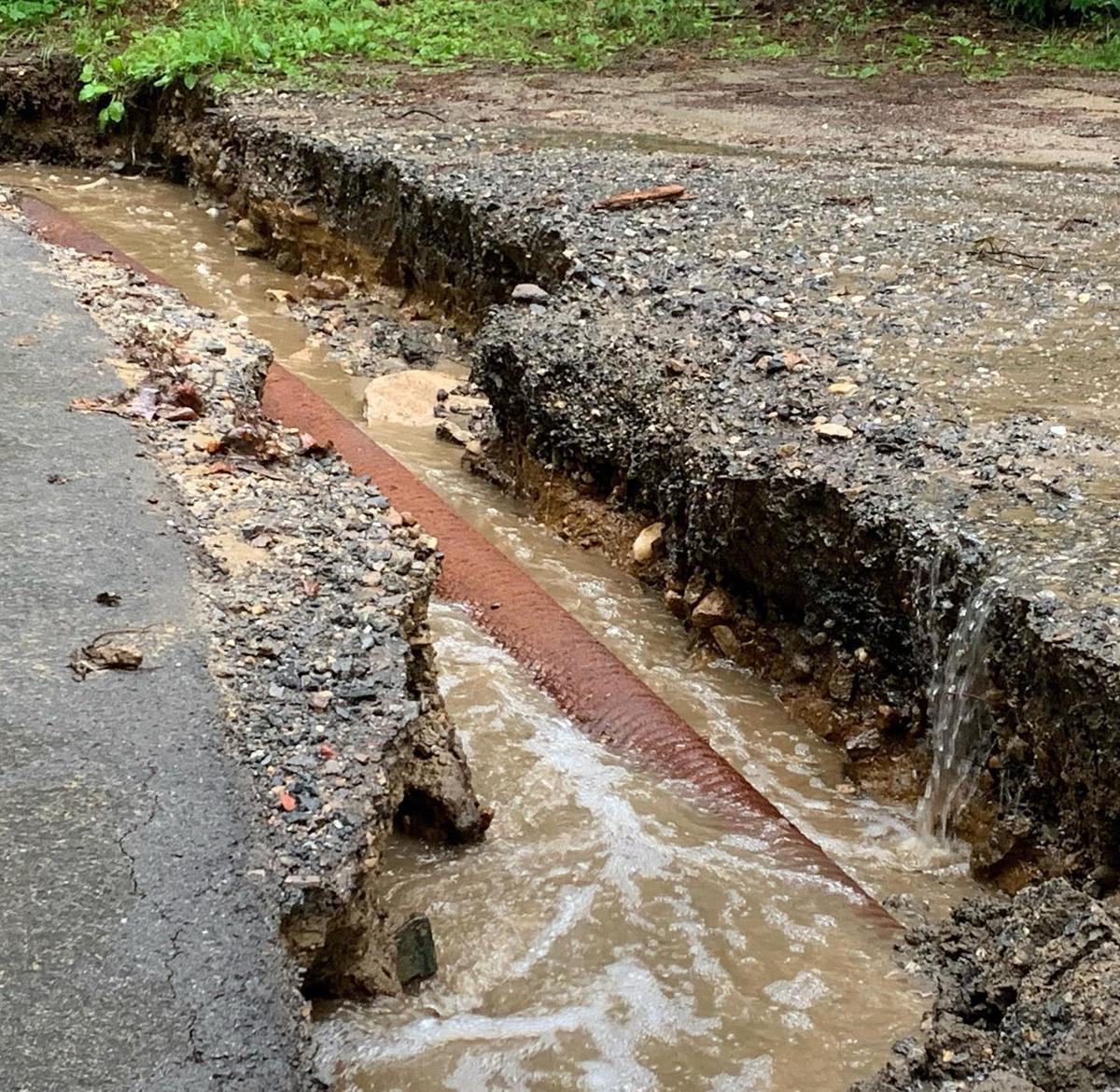 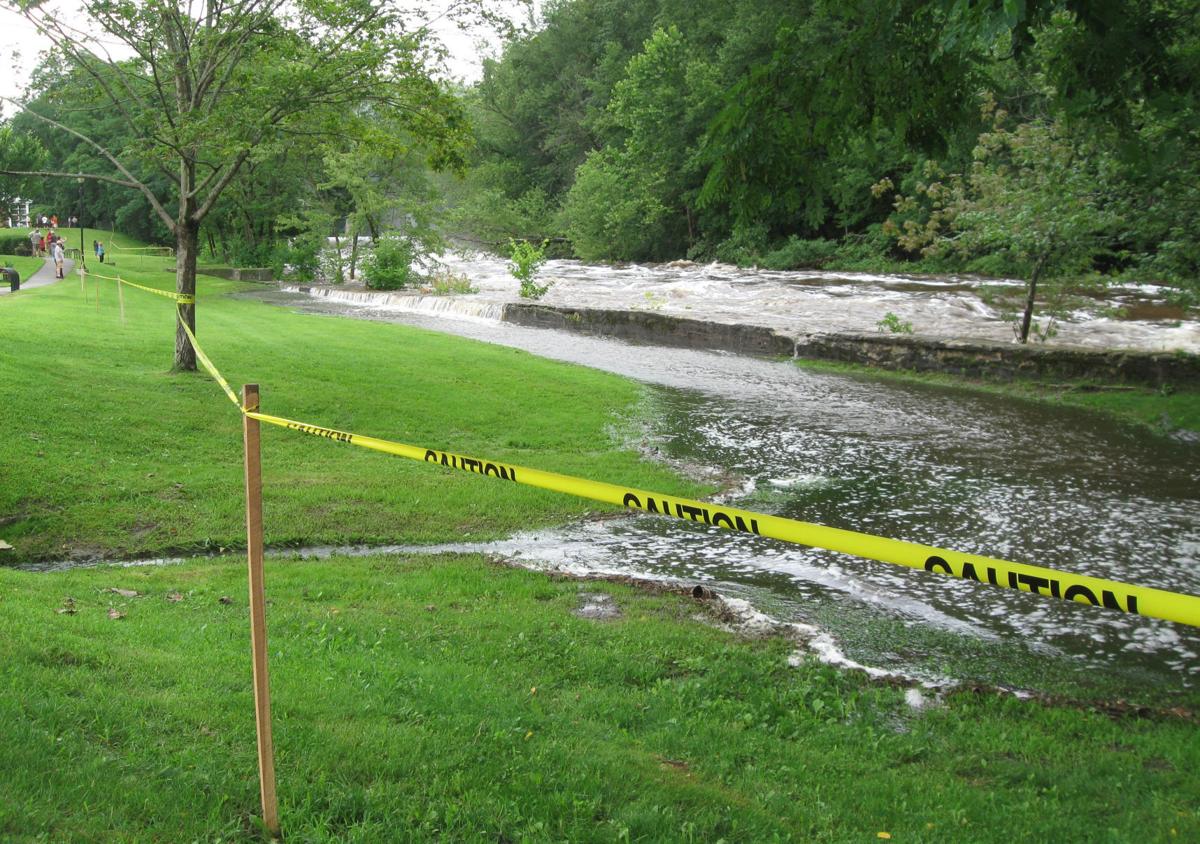 The Ashuelot River spills over the retaining wall at Millstream Riverfront Park in downtown Hinsdale Sunday. 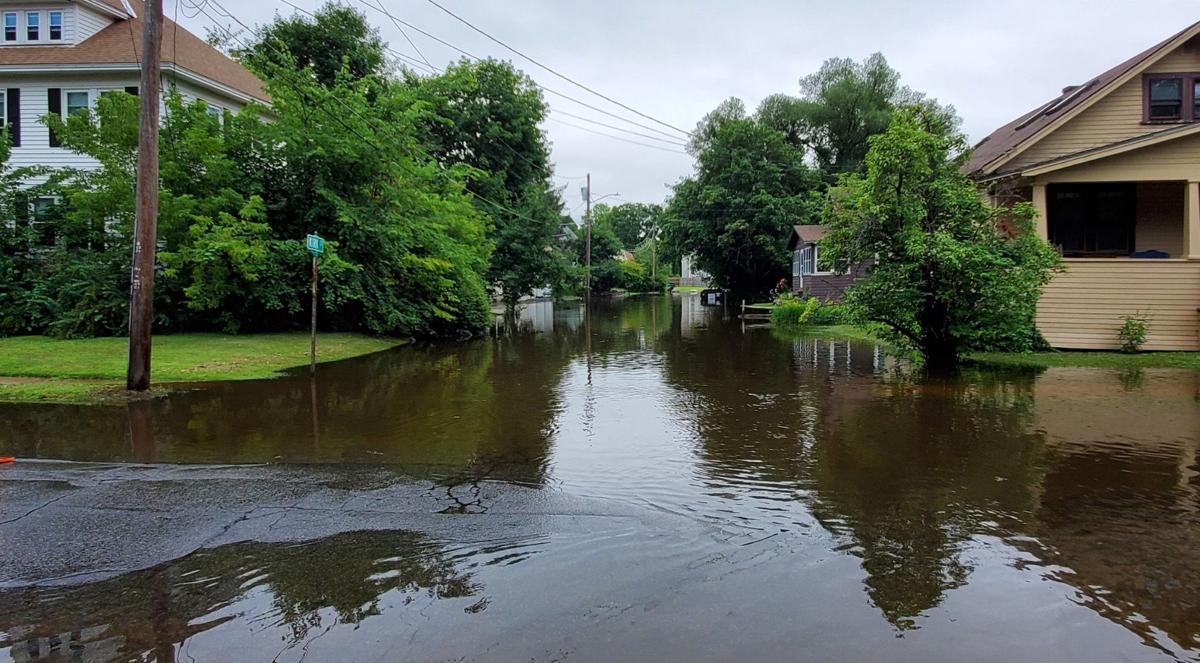 Flooding on Kirk Court in Keene. 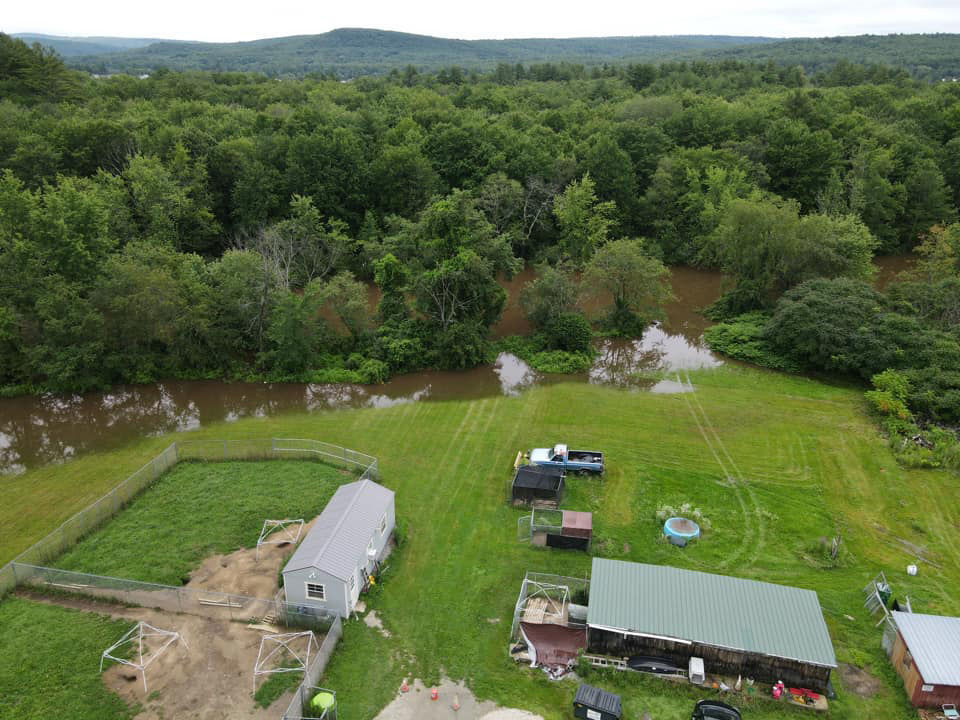 The Ashuelot River rises off Matthews Road in Swanzey Sunday. Photographer Jessica Hendelman says the river looks higher than it did during the flooding of 2005. 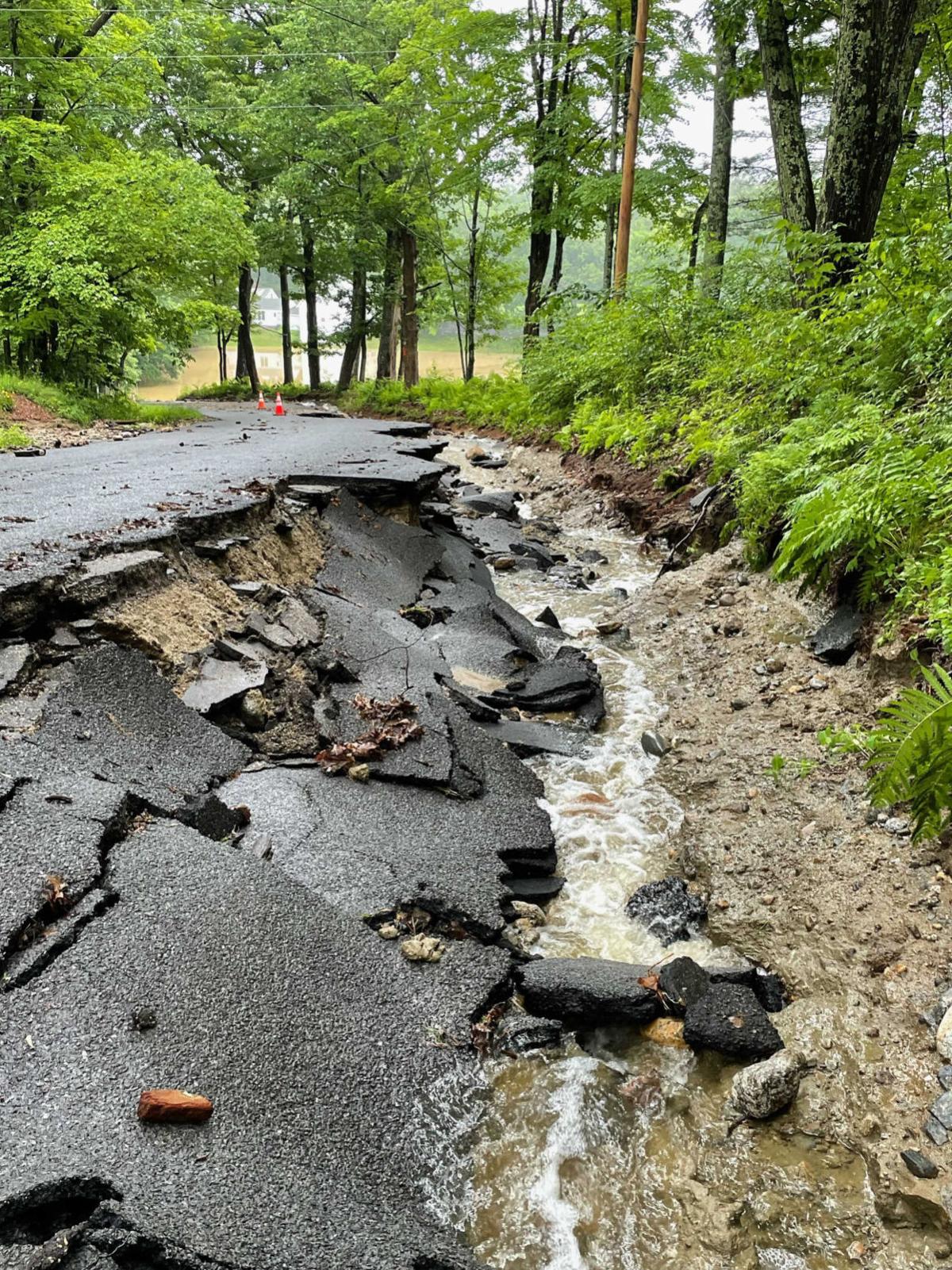 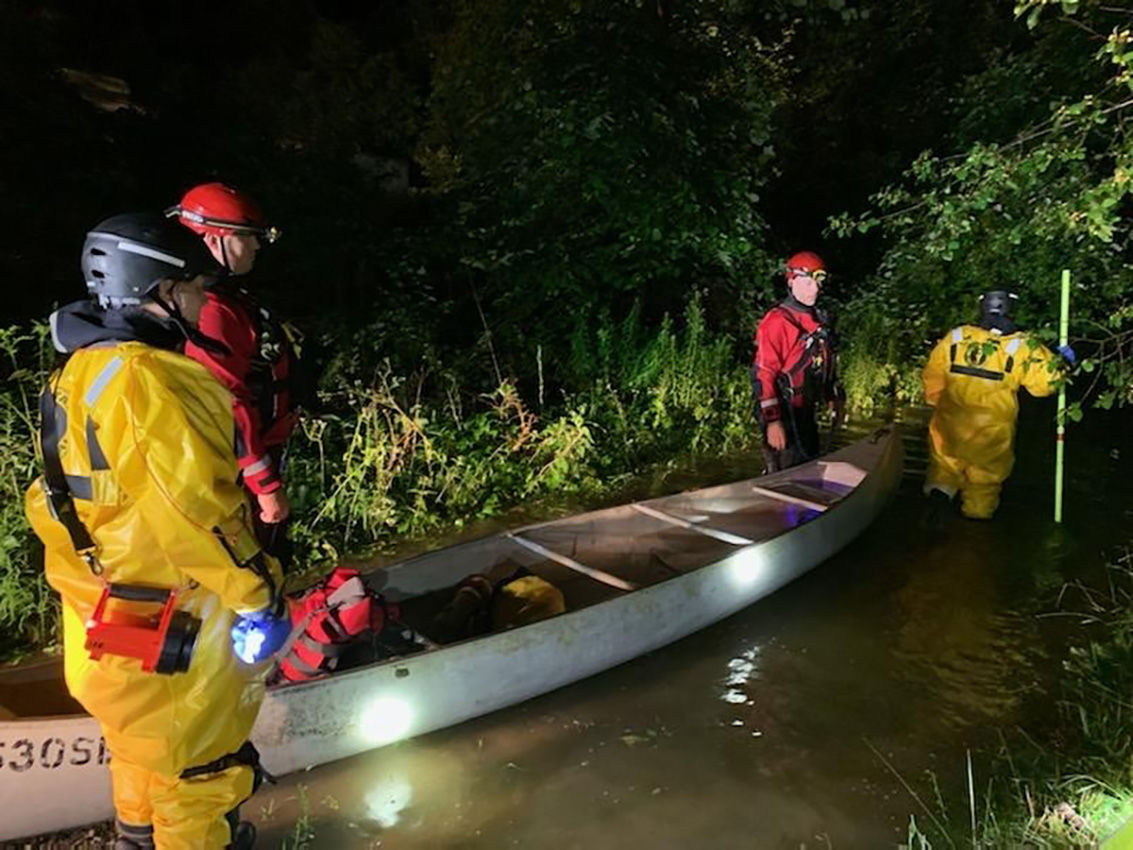 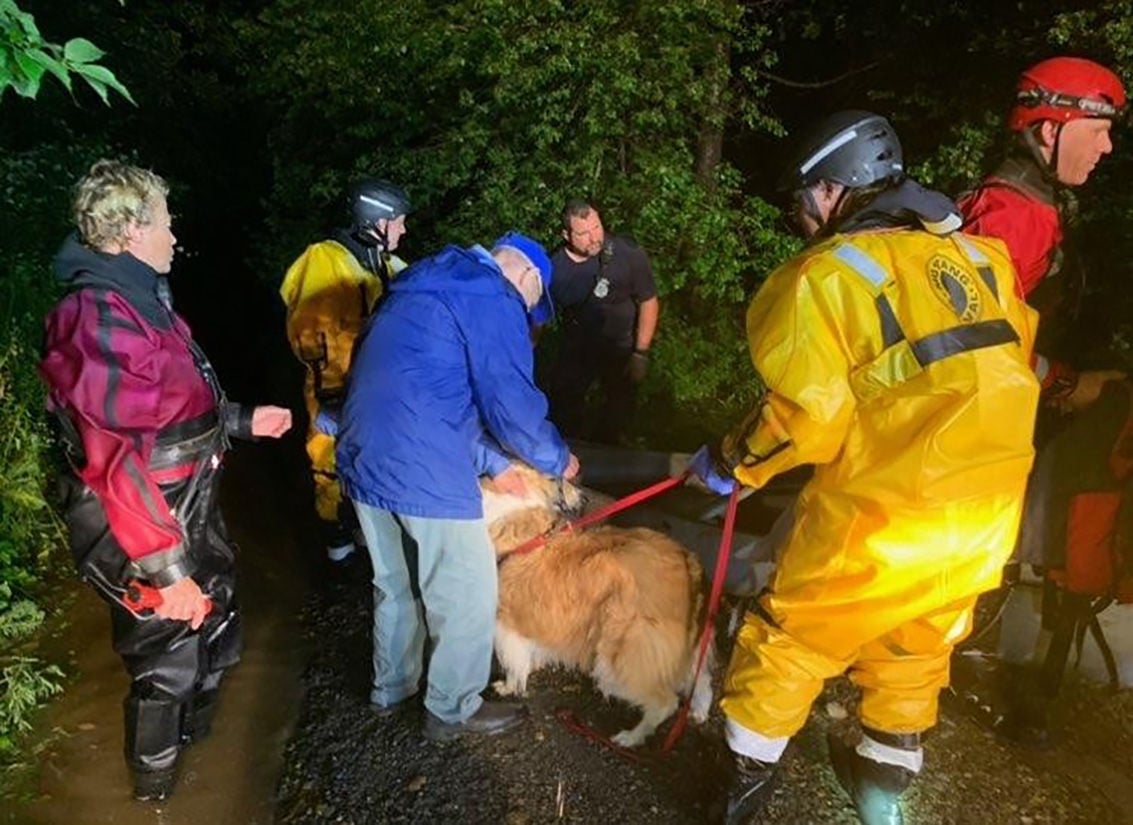 Damage from flooding on School Street in Marlborough.

Tessa Ash-Norton, 11, and Sawyer Ash-Norton, 9, take advantage of the flooding on Carpenter Street in Keene Sunday.

The Ashuelot River spills over the retaining wall at Millstream Riverfront Park in downtown Hinsdale Sunday.

Some washed-out roads and evacuations came after flooding was reported in several Monadnock Region towns Sunday.

The Keene area saw about 5 inches of rain on Saturday and overnight into early Sunday, caused by a slow-moving storm system, according to the National Weather Service’s office in Gray, Maine. Reports to the weather service included totals of nearly 7 inches of rain in Jaffrey, 5 inches in Marlborough and Swanzey, between 2 and 3 inches in Chesterfield and 1.56 inches in Walpole.

Meteorologist Michael Clair said the rain will continue, though less consistently, over the next couple of days.

“We’re not expecting it to be steady as it has been, but there may be some pop-up showers and storms today and tonight and some showers tomorrow in the morning,” Clair said Sunday morning. He added that the weather is expected to dry up by Monday evening or Tuesday morning.

Things had largely calmed down by Sunday evening, according to Keene Fire Chief Mark Howard, and much of the flooding had begun to recede by Monday morning. He said that there had been at least two evacuations due to the storm, one on Wetmore Street, and at least one person who left their Boston Place home voluntarily.

On Monday morning, he said there were still some parts of Key Road that were under several inches of water and warned motorists about trying to pass through these areas.

“It’s not recommended to try to drive through it,” he said. “We had several calls last night about cars stalling out in those pools.”

But he said most of the problem areas are in people’s yards. He said the fire department responded to more than 20 calls on Sunday related to the flooding, particularly flooded basements.

However, Howard said he wasn’t aware of any major infrastructure damage stemming from the storm, noting that he was only aware of a few roadways where the edges of the streets had eroded, something that will have to be fixed in the long term.

Swanzey Fire Chief Bill Gould said Sunday that much of the problem was caused by culverts being overwhelmed, and water without anywhere else to go was spilling into roadways. He said the water will take the path of least resistance and can carve out sections of roadway, which was seen on Christian Hill Road, where several portions of the street collapsed.

He added that it’s not clear in some areas whether the roads under the water have been washed away and said the town may need to wait until water recedes to determine the extent of the damage. In the meantime, Gould advised people to avoid attempting to drive through flooded areas.

“Even if it appears to be real shallow, the force of the water could actually move a car,” he said. “Or people might not be able to see road washed away underneath.”

Gould said things were mostly calm overnight from Sunday to Monday, except when the town had its sole evacuation during the storm. Around midnight, Gould said the station received a call about a house that had become surrounded by water on Causeway Road, and three adults and a dog were trapped inside.

He said that the department responded, along with assistance from Keene Fire Department, to retrieve the three men and the collie who lived there. No one was injured.

“We were going to use the rescue boat, but the next-door neighbor had a canoe,” Gould said. “So that worked out perfectly.”

In Troy, Fire Chief Mark Huntoon said he had two calls for flooded basements Sunday, and a few roads were washed out, though still passable.

One of the hardest hit areas was at the corner of Brook and Prospect streets, he said, which saw about 4 feet of water. However, no injuries were reported, and no evacuations were needed.

Gould also said the town had a report of an unoccupied truck that had been carried away by the flooding near Flat Roof Mill Road which had not yet been located. The department had also responded to about six flooded basement calls as of late Sunday morning.

Jaffrey saw multiple washouts and road flooding, according to a post on the fire department’s Facebook page. The fire department could not be reached for further details Sunday or Monday morning.

In Peterborough, the worst-hit spot was Old Town Farm Road, which became impassable when a portion of the road gave out, essentially reducing it to one lane, said Fire Chief Ed Walker. He said this left 18 families — his included — stranded on the dead-end road for several hours, though crews were eventually able to clear a path for those people.

“Old Town Farm Road is going to be huge ... there’s 200 feet of roadway where a lane is missing,” Walker said Sunday evening. He added that “it will take weeks to get this squared away.”

Beyond that, Walker said, most of the town wasn’t too hard hit by the storm. He said there was flooding on Old Jaffrey Road after a culvert blew out, and flooding in a few other areas has since receded.

He also applauded those who operate the dam at Edward MacDowell Lake. Walker said the dam’s flow was restricted to limit the amount of water passing through.

Gould said Monday morning that Swanzey’s dams also appeared to be holding up, as well.

He also said it might be some time before the extent of the damage the flooding has caused is known. In some areas, he said, the nature of any issues won’t be known until the water has receded enough to get a better look.

Howard also said Keene’s dams have been holding up well. Though not a city dam, he noted that the Three Mile Reservoir Dam on Route 10 is particularly important, as it drains into Beaver Brook, and has receded a foot since Sunday afternoon.

In Winchester, however, the dam was being threatened by a water breach, according to Dave Johnson, president of the Forest Lake Improvement Association.

He said the water levels reached 38 inches — seven more than the dam’s 50-year stone mark. This marked the second highest water level the association has seen since the Hurricane of 1938.

Around 8 a.m. Sunday, Johnson and about 45 association members filled approximately 150 feet of the dam’s surface with sandbags. Late Sunday night, he said he and a few other members added more bags.

“We’re extremely confident that we won that battle,” Johnson said.