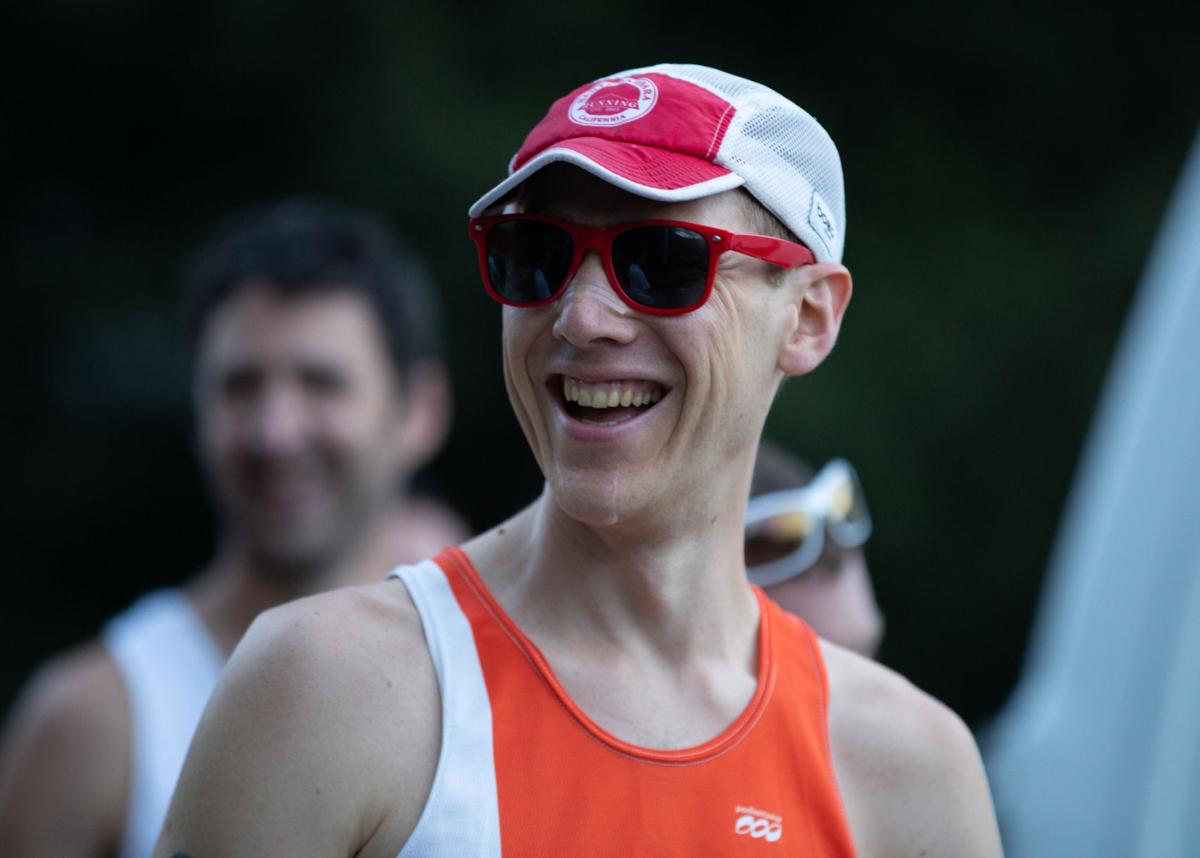 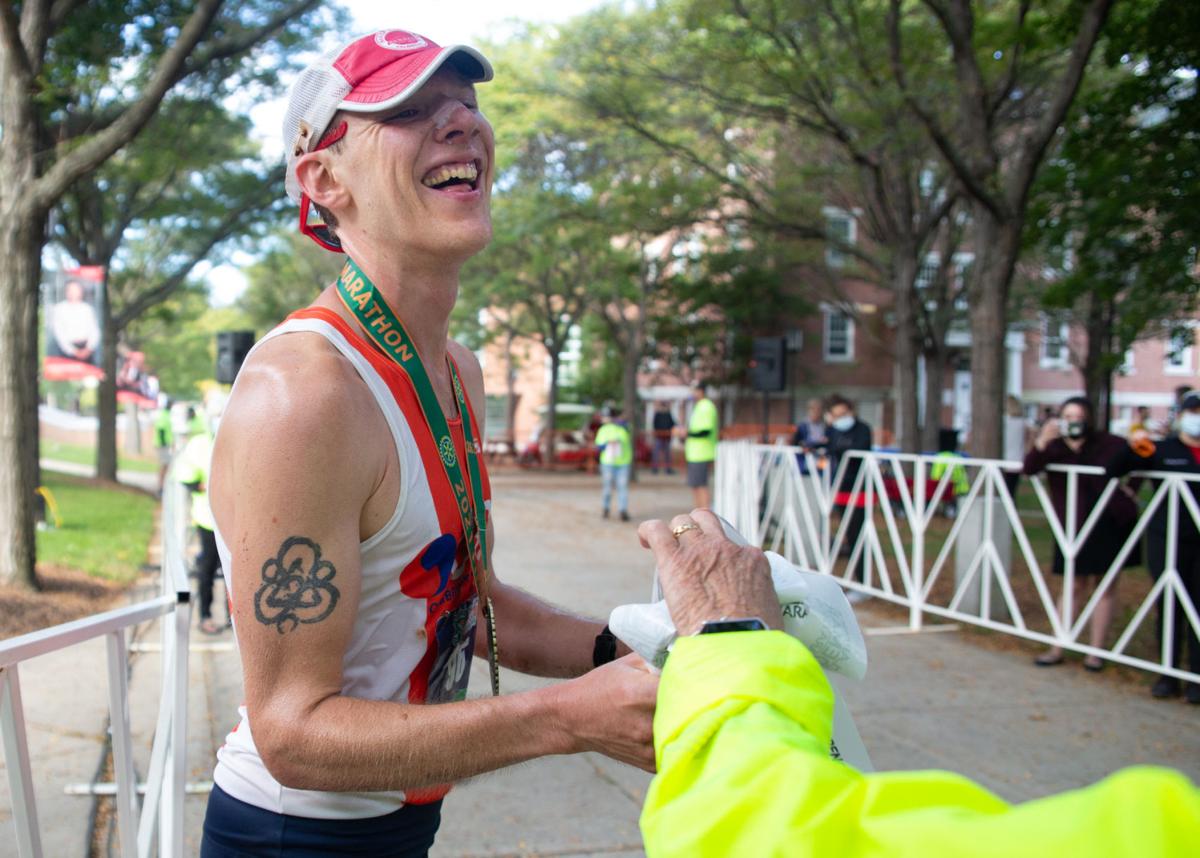 Susan Newcomer of Spofford hands Conor Sleith the finish-line tape after he won this year’s Clarence DeMar Marathon on Sept. 26 in Keene. Below, Sleith crosses the finish line at Keene State College, winning with a time of 2:28:42. 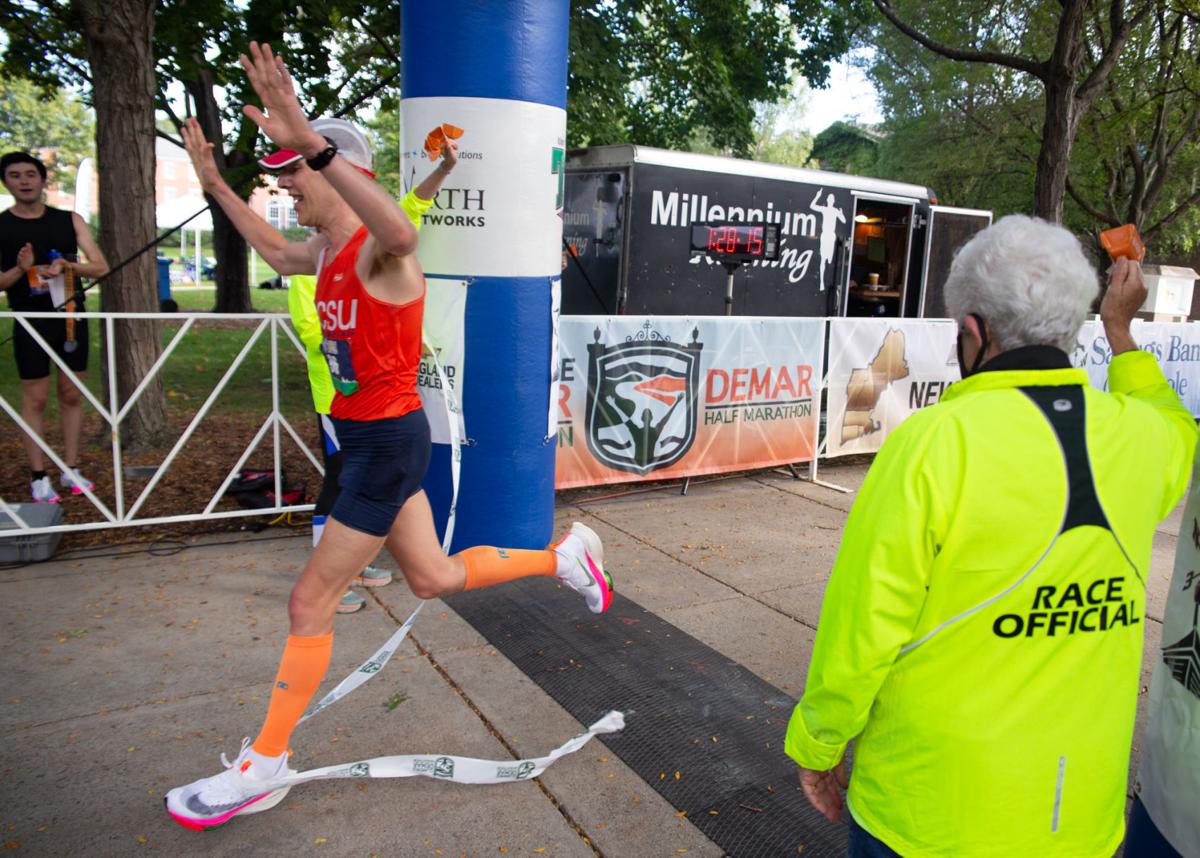 Conor Sleith crosses the finish line at Keene State College, winning this year's Clarence DeMar Marathon with a time of 2:28:42. 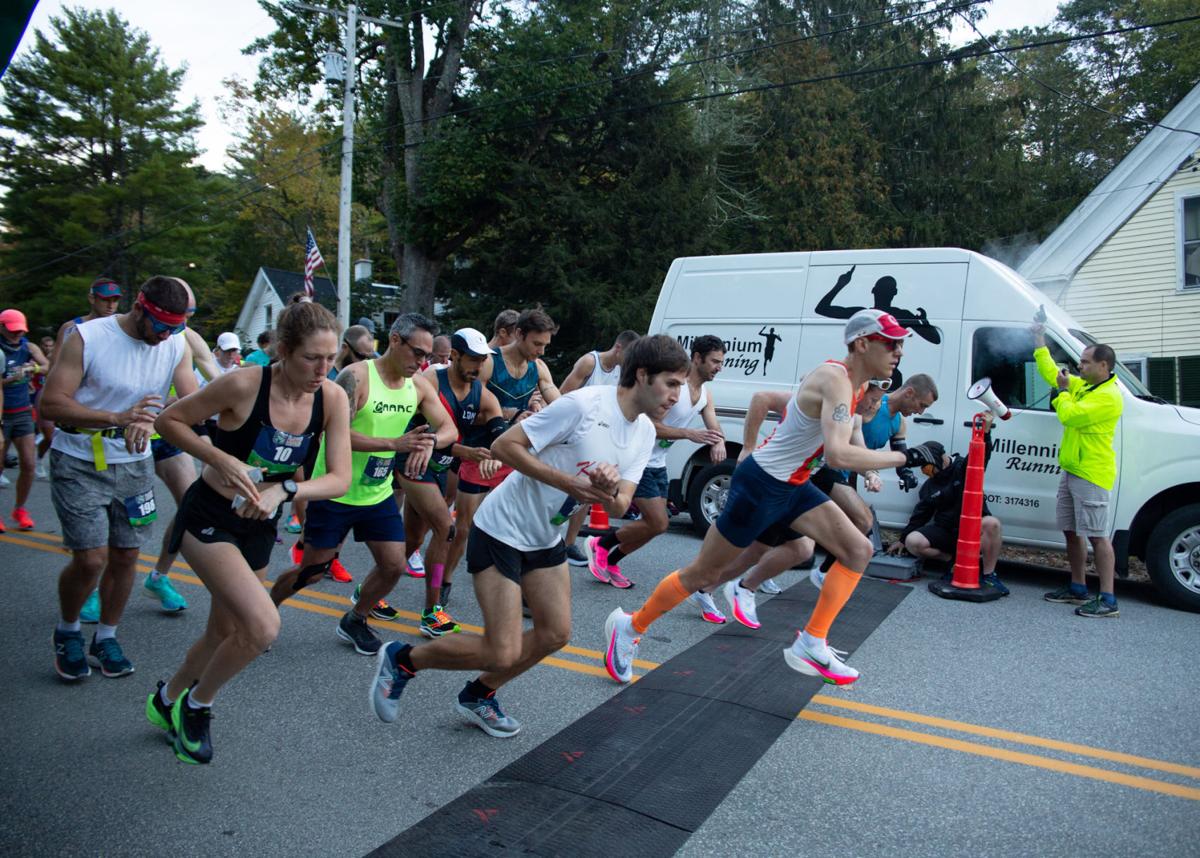 Conor Sleith, on right, takes off from the starting line of this year's Clarence DeMar Marathon on Sunday, Sept. 26, with fellow runners in Gilsum. 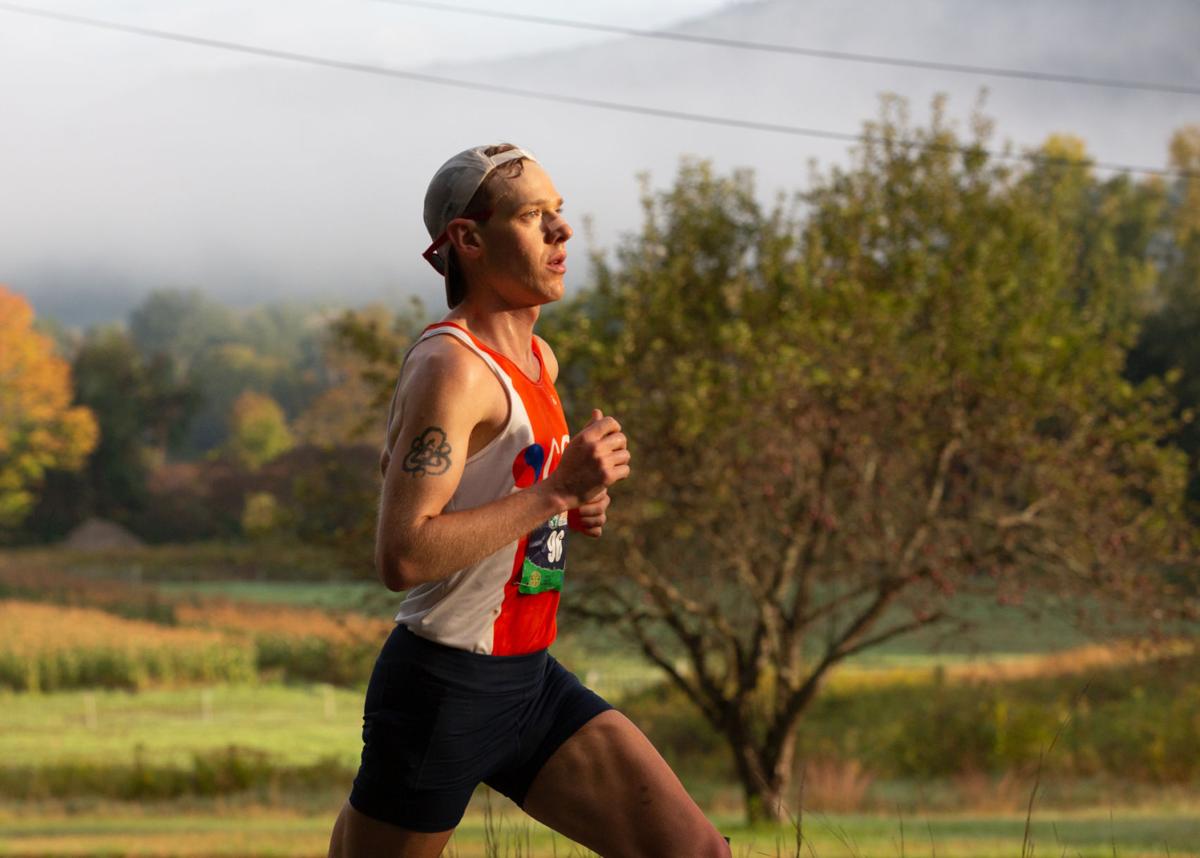 Conor Sleith leads this year's Clarence DeMar Marathon along Route 12 toward Surry Mountain Lake, on Sept. 26 in Surry. Sleith won the race with a time of 2:28.42.

Susan Newcomer of Spofford hands Conor Sleith the finish-line tape after he won this year’s Clarence DeMar Marathon on Sept. 26 in Keene. Below, Sleith crosses the finish line at Keene State College, winning with a time of 2:28:42.

Conor Sleith crosses the finish line at Keene State College, winning this year's Clarence DeMar Marathon with a time of 2:28:42.

Conor Sleith, on right, takes off from the starting line of this year's Clarence DeMar Marathon on Sunday, Sept. 26, with fellow runners in Gilsum.

Conor Sleith leads this year's Clarence DeMar Marathon along Route 12 toward Surry Mountain Lake, on Sept. 26 in Surry. Sleith won the race with a time of 2:28.42.

When the starting pistol fired at the Clarence DeMar Marathon in Gilsum at 7 a.m. sharp on Sunday, Sept. 26, Conor Sleith sprinted out in front of the pack.

“I only turned around a couple of times to see if anyone was behind, but the race was pretty clean, gate to tape. I couldn’t hear anyone behind me,” Sleith, now a resident of Waltham, Mass., said in a phone interview this week.

Sleith’s time was 2:28:42, 15 minutes ahead of the second-place finisher, Arthur Smith III of Somerville, N.J.

“When I crossed the finish line, it was incredible, a mixture of relief, pride, elation and joy,” Sleith said. “Every part of my brain was going haywire; it was pretty overwhelming. I was half laughing, half sobbing.”

His mother, Mary DesRosiers of Harrisville, and his twin brother Robin Sleith of Damariscotta, Maine, cheered him on at checkpoints throughout and celebrated as he crossed the finish line.

“There were some really interesting moments for me at the DeMar,” Sleith said. “I ran by the Waldorf School, where I attended 7th and 8th grade. I ran by Keene High School, where I was a student.”

At mile 18, along North Lincoln Street in Keene, “I was hurting so bad, really desperate,” he said. “But I had to keep running. The last 10K were difficult, but I knew I was winning, and that kept me going.”

Although now an accomplished marathoner, Sleith said that while growing up in Harrisville, athletics were never part of his life. Instead, he was consumed by music, and played the piano at local contra dances, organized by his mother. She has been teaching — and calling — traditional American dances for more than 30 years in town halls, schools and at music festivals around the country.

Sleith continues to play the piano for his own entertainment, but not at contra dances, at least temporarily. “COVID and contra dancing don’t go together very well.”

After graduating from Keene High, he attended UMass Lowell, studying in its Sound Recording Technology program. He is now a manager in the Advanced Technology Group at Sonos, Inc., a manufacturer of wireless sound systems.

He came to running by happenstance. When he was in his late 20s, his brother — a casual jogger — mentioned to Conor that he, too, might want to consider running, and introduced him to an app called “Couch to 5K.” The program is designed for beginners to gradually build up an ability to run a 5K without stopping.

“The first time I ran, it was so hard,” he said, and he was barely able to sustain the effort for a few minutes. “I had to ask myself, ‘How am I going to ever do this?’ ”

“Each time I went out running, it became a little easier, and eventually, I felt like I could run continuously,” he said.

Finishing 5Ks became routine, and he stepped it up to longer runs.

“The idea of competing was not in the picture,” he said.

Then, by chance, something changed.

“… I was training for a half-marathon and got lost during what was meant to be an 11-miler, farther than I’d ever run at that point,” he said in a Q&A interview in a July 2020 blog from the Chaski Endurance Collective, an online training program in which Sleith participates. Chaski refers to the name of ancient Inca runners who served as message-carriers. “At around 12 miles, something changed; I was running faster, and it felt effortless. That day I discovered my love for long runs …”

“At mile 11, 12, 13, I felt better and it became easier. I said to myself ‘Let’s try this,’ and I wanted to see if I could do it faster. Seeing the improvements made me fall in love with the process of training.”

There was a side benefit to running as well, he said, with his weight dropping from a high of about 220 pounds to his present 160 pounds on a 6-foot-tall frame.

Eventually, he signed up for the 2014 Baystate Marathon in Lowell, and began to train in earnest. He finished with a time of 3:29:09. His moment as a marathoner had arrived.

“I run what most would consider ‘high mileage,’ ” he said, laying out the complexities of preparing for a marathon. “At the peak of a marathon buildup, I’ll run 100 to 115 miles a week, often running twice a day. The overarching goal of a training block, which usually lasts 12 to 15 weeks, is to gradually extend the amount of time I can maintain my marathon pace.”

Workouts, he said, can be very challenging.

“One day a week, usually Sunday, I do a ‘long run’ which can be anywhere from 18 to 27 miles. Sometimes these are just runs at a moderate pace, and sometimes they’ll include intervals of faster running.”

It’s crucial during training — and racing, too — to try and avoid injuries, he noted.

“You have to string together sessions in such a way that you become good at recovering,” he said. “The body doesn’t necessarily distinguish between physical and emotional stress and if there’s something stressing me in my life, I realize I have to throttle back.”

The most difficult race he’s run was the Cheap Marathon in Derry in April, so named because the entry fee is so low.

“I didn’t train correctly,” he said, and although he finished, the race was a painful slog.

There was a time, too, when he almost gave up on running. Again, from the blog:

“There was a two-year stretch, fairly early on in my running journey, where I was stuck in this cycle of getting injured, doing too much too soon during the subsequent buildup, and reinjuring myself. I was pretty close to just giving up on it. I’m glad I didn’t because I’ve achieved way more since then … It took me a long time to learn the lesson of being patient, not trying to force fitness, and listening to my body. It’s still a lesson I’m learning, but I like to think I’m better at it now.”

Sleith is a member of the Cambridge Sports Union running club in Massachusetts and has yet to run the Boston Marathon, although he qualified for the 2020 race, which was canceled because of COVID-19. He has yet to decide whether he’ll register for 2022.

In the meantime, he said, running has revealed to him an aspect of his personality he hadn’t recognized before — a competitive nature.

“I never thought I was a competitive person, but it’s the reason I still run; I want to win. I want to compete,” he said. “I keep overachieving and keep asking myself, ‘How good can I be?’ I try to get as much out of my potential as I can; that’s what drives me now.”

Despite that, he said running doesn’t dominate his life to the exclusion of his other avocations, which include hiking, biking and enjoying nature.

“I’m not consumed by running, I’m not that way,” he said. “I’d describe myself as playful, I love walks in the woods, finding mushrooms, flowers, bugs — just exploring. You can’t just keep running all day. I try to maintain a pretty consistent sense of wonder in life.”

At a glance: Conor Sleith