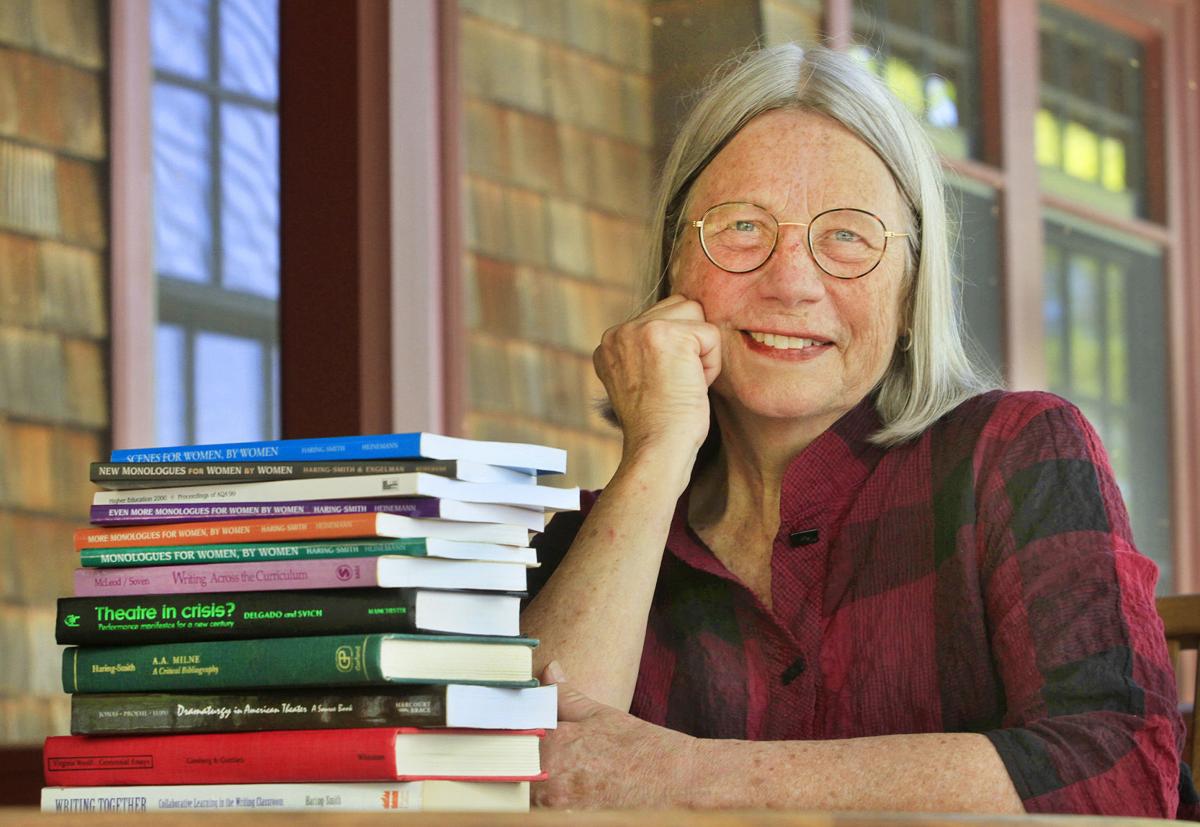 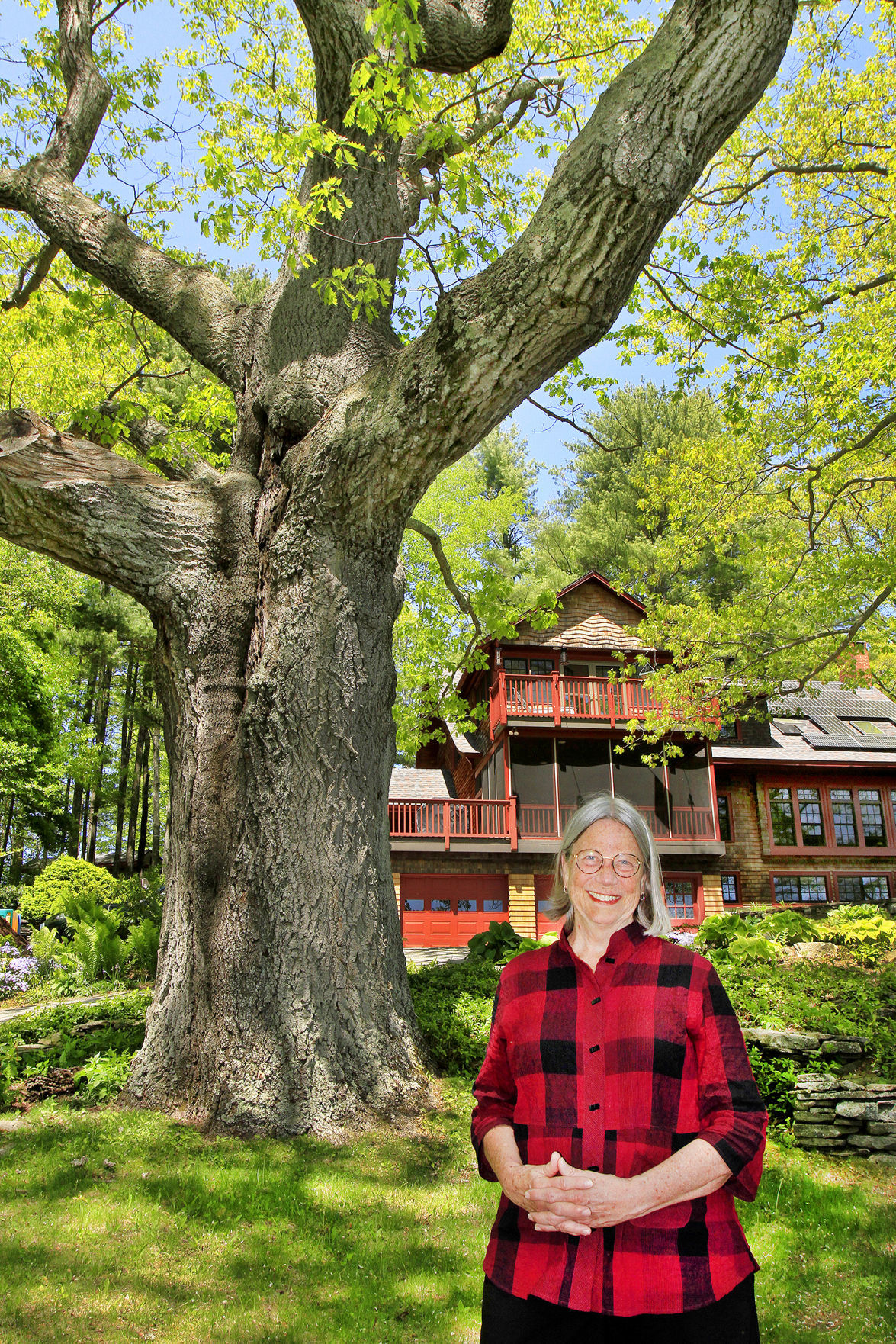 Tori Haring-Smith of Peterborough near an oak tree in her yard. She says she’s been told the massive tree is the fifth oldest in the state.

Tori Haring-Smith of Peterborough near an oak tree in her yard. She says she’s been told the massive tree is the fifth oldest in the state.

PETERBOROUGH — There’s a massive oak tree in front of Tori Haring-Smith’s home a few miles from the town’s center, the circumference of its trunk so big that two people with outstretched arms couldn’t link up to embrace it.

“I was told it was the fifth oldest tree in the state,” said the 67-year-old, a relatively recent transplant to Peterborough, having moved here with her husband, Bob, in 2017. This followed a 12-year stint for Haring-Smith as president of Washington & Jefferson College in Pennsylvania, founded in 1781 and one of the 20 oldest colleges in the United States.

If it’s true that it’s the fifth oldest tree in the state, that could mean it’s more than 300 years old, dating to 60 years before the college she headed was founded. (The record for the oldest oak tree in New Hampshire is a white oak next to Perley Pond in Laconia, with a circumference of 20 feet. It is estimated to be 400 years old.)

“I love trees,” she said, gazing out from her screened-in porch with an expansive view of the Pack Monadnock mountain range off on the horizon.

“I am an only child, and when I was a young girl, I lived on a dead-end road, so there weren’t many kids around. I used to climb a tree and read books.”

That was in Galesburg, Ill., hometown of famed poet and Abraham Lincoln biographer Carl Sandburg and location of Knox College, where her father, Philip Haring, was a professor of political theory. Her mother, Jacqueline, was the archivist at the institution.

Like many retirees who eventually settle in this part of New Hampshire, she’s from elsewhere, having been born in Evanston, Ill., home of Northwestern University, and raised in Galesburg. Her career took her to Brown University in Providence, R.I.; the American University in Cairo; and Willamette University in Oregon, as well as to the presidency at Washington & Jefferson.

“I’ve always thought of myself as a storyteller,” she said, “a communicator. Maybe that’s from my father; he had a passion for difficult discussions, engaged conversation and authentic listening, for thoughtful querying. That’s what a classroom should be — not rote lecturing, but a conversation.”

Her father, a committed pacifist, had been a junior officer in the United States Navy, assigned to an anti-aircraft battery on the U.S.S. California, stationed at Pearl Harbor. On Dec. 7, 1941, the day of the Japanese attack, he was one of the last men off the badly crippled ship as it sank from the numerous torpedoes and bombs that hit it. He was found wandering the area a couple of days after the chaotic carnage, most of his clothes blown away. The traumatic experience scarred him, leading to an early discharge in 1942. The California was eventually re-floated, retrofitted and saw service throughout the latter years of the war.

“He really suffered from what we’d call today PTSD,” she said.

The Navy at first wanted to keep her father in the service following the attack, but Haring-Smith said her grandmother, Helen Louise Haring, traveled by train from Cambridge to San Francisco, and then by ship to Hawaii.

“She told them, ‘I want my son back,’ and he was discharged.”

Haring-Smith’s mother had been with the Red Cross during World War II, operating canteens for the soldiers in New Guinea, then was transferred to Kyoto, Japan, shortly after its surrender.

“My mother taught me that you can do anything if you work hard enough. She fought her way to the front of the line,” Haring-Smith said. “She was ambitious.”

After high school graduation in Galesburg, Haring-Smith enrolled in Swarthmore College in the Philadelphia suburbs, where she met her husband, a mathematician who had a career in the information-technology field.

Immediately after graduating from Swarthmore, she received a Thomas J. Watson Fellowship to study abroad during her senior year. (Watson was the founder of IBM.)

For the entire year, she traveled the world.

“During that time, I visited the 13 smallest countries in the world,” she said, “mimicking an account by John Sack, who wrote a book called ‘A Report from Practically Nowhere,’ which had been in my mother’s bookcase for years.” Sack’s book was published in the late 1950s and was a humorous travel account of the world’s “least important countries,” according to its description on Amazon.

The smallest of the small she visited is located within Rome and named The Sovereign Military Hospitaller Order of Saint John of Jerusalem, of Rhodes and Malta, more commonly referred to as the Knights of Malta, a Catholic lay religious order.

“It is a sovereign nation, with its own passports and currency,” she said. “It’s a three-story building in Rome, and there are 28 residents. They rent out the first floor.”

Parenthetically, Haring-Smith later became the executive director of the Thomas J. Watson Foundation, serving from 1999 to 2001.

After her study-abroad year, Haring-Smith went on to earn both a master’s and doctorate degree from the University of Illinois at Urbana-Champaign.

A significant portion of her academic career has involved the theater, either as a scholar, translator of plays, drama coach or teacher.

“Theater is really in my blood.”

She was director of the Department of Performing and Visual Arts at the American University in Cairo, artistic director of its Wallace Theatre, associate professor of theater arts at Brown University, and a dramaturg at the Trinity Repertory Company in Providence. A dramaturg is a literary adviser in a theater, opera or film company, who researches, selects, adapts, edits or interprets scripts, and consults with authors and directors.

“In theater, you’re taking someone’s vision, and you’re going to tell their story,” she said. “It teaches you to empathize, to get out of yourself and imagine a different reality, and to become a different person. For that bit of time, it takes you somewhere else.”

From her work as an academic in the theater field, she realized she had administrative abilities, and was hired as dean of the College of Liberal Arts at Willamette University in Oregon. She was then promoted to vice president for educational affairs at the university, serving until 2005, when she was recruited as the first female president of Washington & Jefferson College.

“I loved every minute of that job, and I was exhausted most of the time,” she recalled, the role of college president involving extensive travel for fundraising purposes, as well as constant interactions with alumni, faculty and students.

“You are the face of the institution to the outside world,” she said.

Among other accomplishments during her tenure, the college raised more than $200 million for its endowment and capital projects, built a new science center and recreation center, increased applications from 1,000 to 7,000 annually and enhanced the institution’s academic rigor. She also stabilized the college’s finances, from a $1.5 million deficit when she arrived, and operated it in the black during each year she was president.

By 2016, she knew it was time to move on, and told her board she would be retiring. She left the following year, but she’s still involved with the institution, writing a history of the college, an endeavor that takes up a substantial part of her time.

“There’s tons of research involved, and I’m obsessive about details,” she explains, working from an inventory of hundreds of index cards with handwritten notes. “I revise and edit, and I’m an inveterate foot-noter.”

Her interest in the theater was partly responsible for why she and her husband now live in Peterborough.

“We had a small cabin on Squam Lake, and we were looking for a place to retire. We drew a circle south of there and started to look at some small cities. I’d heard of the Peterborough Players, so I knew of the town. We visited, loved the place, and that’s where we decided to settle.”

They purchased a house, with plans to renovate it, living temporarily in their Squam Lake cabin while the work was being done.

“There’s a bit of kismet in this. In June, a microburst hit Squam, and a tree fell on our cabin, cleaving it in half.” (They weren’t in it at the time.) So, instead of renovating the Peterborough home, they sold it and purchased their current residence, originally built in 1901 as a summer residence but later in the century rebuilt in the Craftsman style of architecture.

She quickly became involved in community organizations, including being named to the board of the Peterborough Players. She is also involved with Firelight Theatre Workshop in Peterborough, founded in 2017 by Nora Fiffer and Jason Lambert.

In addition, she’s serving as a volunteer fundraiser and grant writer for the 1833 Society in Peterborough in its effort to expand and renovate the town library, the oldest tax-funded public library in the nation.

Shortly after arriving in town, she joined the Monadnock Writers’ Group, which since 1984 has provided fellowship and support to writers of all genres and levels of achievement. It also sponsors guest speakers and writing workshops.

Although her writings have been scores of academic articles and a dozen books about aspects of the theater, she is shifting over to fiction.

In 2018, she was one of the runners-up in the Spring Flash Fiction contest sponsored by the New Hampshire Writers’ Project, for her work “Baby Steps.” In the contest, writers submit pieces that can be read in under three minutes. The Writers’ Project is a nonprofit group in Manchester dedicated to assisting budding writers and enhancing the state’s literary heritage.

“The last piece of fiction I wrote was for a class in college,” she said in an interview that appeared in a blog on the website wow-womenonwriting.com. “I was inspired to write again by the exciting, supporting community of writers here in New Hampshire and the possibility of competing in a 3-minute fiction contest … I have a competitive spirit, and so the contest was a real motivator.”

Haring-Smith said she is considering tackling larger writing projects, including a novel or play.

She said her mind is always at work, ruminating about ideas. And living in the country has sparked the muse she needs to write fiction.

“I love to walk out in the country,” she said. “There’s something about the rhythm of the steps or the images I see. I think about characters and the land and the stories they can tell. Often, I come up with a first line of a story, and I use the recording function of my phone so I can remember it.”

At a glance: Tori Haring-Smith

Chester stared at the stains in his coffee cup. In the other room, Bea was knitting again, a…