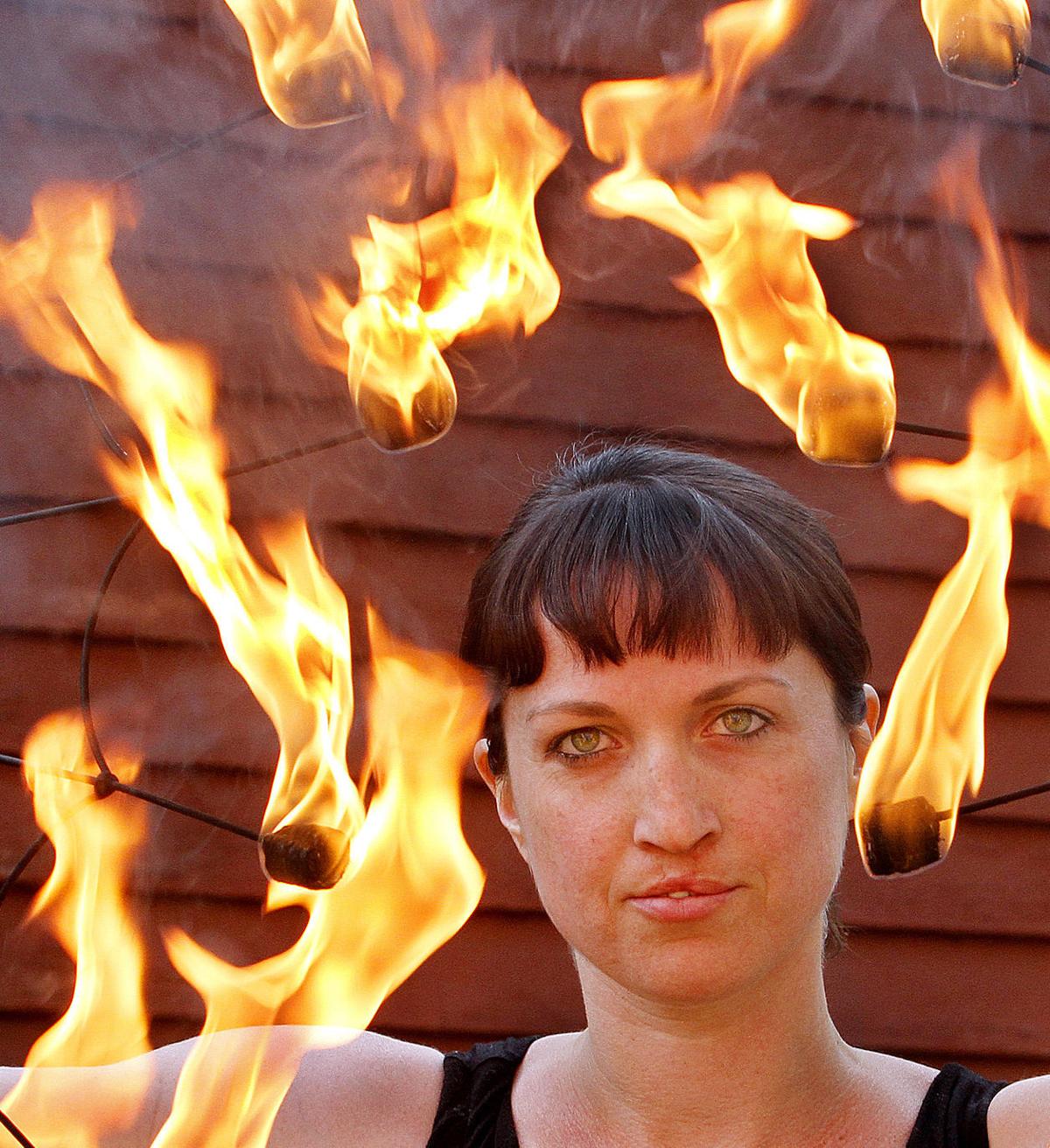 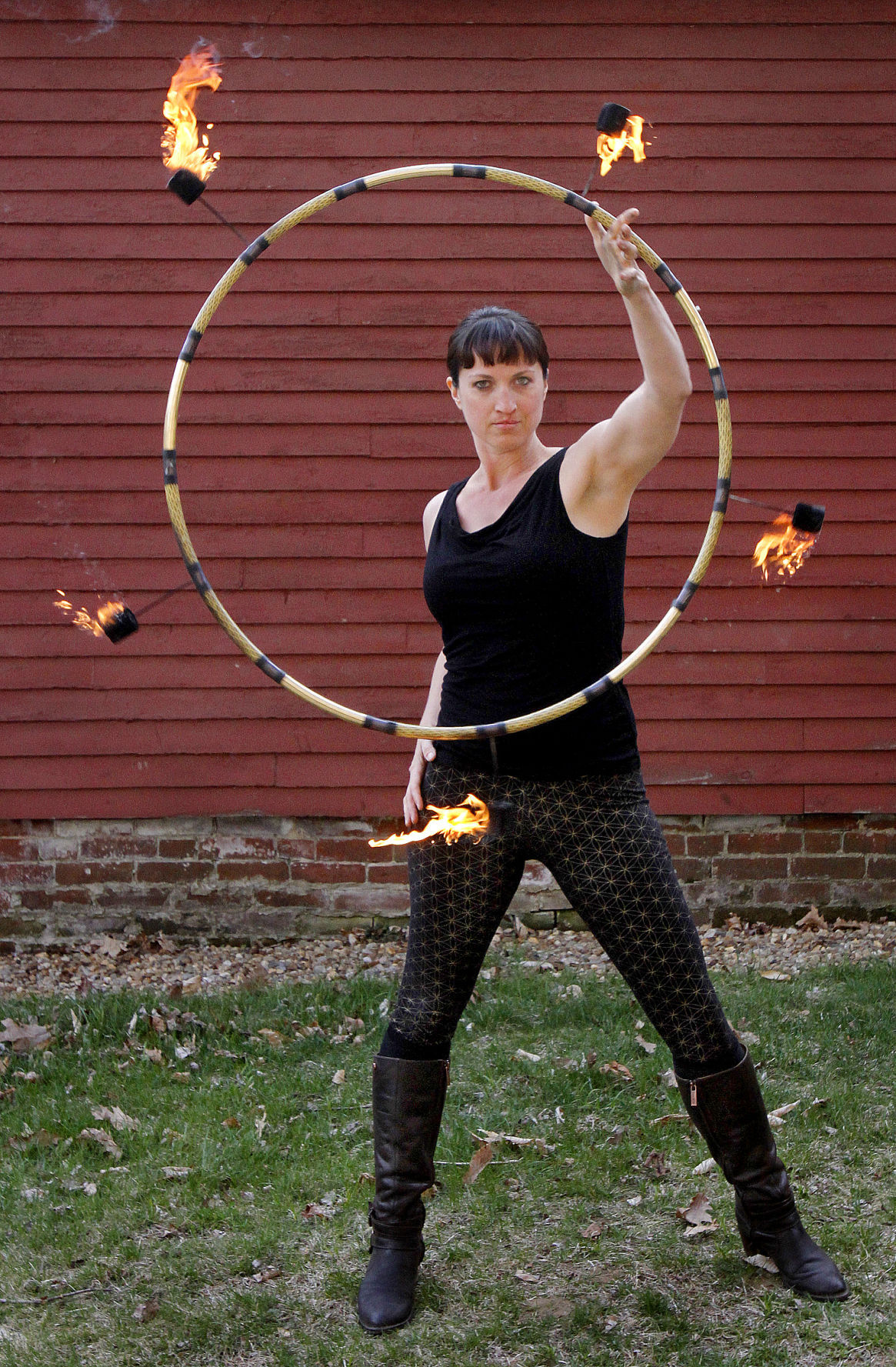 Rebecca Hamilton spins a hoop of fire outside her Gilsum home.

Rebecca Hamilton spins a hoop of fire outside her Gilsum home.

Mahatma Gandhi said: “If we could change ourselves, the tendencies in the world would also change.” No better is this ethos illustrated than in Rebecca Hamilton, the vice president of innovation and social impact for W.S. Badger Co. in Gilsum.

A large part of Hamilton’s role at Badger is to speak about the responsibility that businesses have to their communities. Public speaking is a feat she has been able to undertake despite struggles she had as a child.

Born with a cleft palate, Hamilton would endure six surgeries before her 17th birthday, including bone grafts, and having her jaw broken and wired shut.

While at the Waldorf elementary school in Keene, Hamilton wanted to be an actor, but because the cleft palate left her with a severe lisp, she wasn’t cast in school plays.

Undeterred by this, she understudied the lead roles, and in the process forced herself to speak clearly.

By the fifth grade, she was given the leads in the school plays from then on — the first as Bilbo Baggins in a production of “The Hobbit.”

{span}For two years after her final surgery at the Children’s Hospital at Dartmouth-Hitchcock, she volunteered there. The experience made her appreciate the support she received from her family and community.

“I had this feeling that I was really lucky and that I should give back,” said Hamilton, 33, of Gilsum.

Hamilton graduated from Northfield Mount Hermon in Gill, Mass., in 2001. At the preparatory school, the expectations were that she’d apply to college, though she was uninterested at the time. So she applied to Warren Wilson College in North Carolina because “it was the least college like college I could find,” and then she deferred her admission.

Instead of college Hamilton signed up for a sailing program through Franklin Pierce College (now Franklin Pierce University) in Rindge, which took college-bound high school graduates on boats off the coast of Maine.

Hamilton had never been sailing before but when the two-week trip ended she stayed on the boat for the return voyage. She recounts being in a storm at sea — where the boat was struck by lightning, all the instruments failed and they had to rely on celestial navigation to return to port — and a 4 a.m. watch when the sun was rising and dolphins raced alongside.

“I totally fell in love,” she said, and began focusing on sailing and working in outdoor education.

The first boat she was employed on was out of Mystic, Conn., and took passengers on day trips in Long Island Sound. Through this experience, she met a woman who’d just returned from Thailand, who introduced her to fire dancing during an impromptu afternoon performance.

Fire dancing involves a performer holding two lit balls at the end of a chain called poi. The performer spins the flaming orbs, creating patterns in the air.

Living on the boat, Hamilton had a lot of down time when not taking passengers out on the water, so she practiced fire dancing by herself in the marina’s parking lot. She credits her individual style of fire dancing to this time in isolation developing her art.

Hamilton’s sailing skills developed to the point that she was able to take a job on the Spirit of Massachusetts in 2003, flying down to the Caribbean and sailing the ship back to Long Island as she taught college students seamanship.

It was on her first voyage that she met Chris, her future husband, who was running the college program.

From 2001 to 2004 Hamilton split her time between sailing, traveling abroad, and working at Kroka Expeditions, where she led high school students on rafting and rock climbing trips.

In 2004, at age 23, Hamilton decided she wanted to go to college. She had been thinking of a semester in high school that she’d spent in Australia, where an Aboriginal woman showed her wild medicinal plants.

Though Hamilton didn’t yet know the term, this experience introduced her to ethnobotany, which is the study of how different cultures use plants.

Hamilton sought out a program where she could delve into this discipline, and that took her to the University of Hawaii. She imagined that she would travel the world as a researcher.

While in Hawaii, Hamilton joined a fire-dancing troupe and performed at various events.

After a year in Hawaii, she realized her interest would best be employed as a product developer for her family’s business, W.S. Badger Co. Started by her mother and father in 1995 out of their home, Badger had been making organic balms.

Hamilton began looking for a college program that would be in line with her goals. This brought to UMass Amherst, where she was able to design her own degree program to include the study of medicinal plants, sustainable business, natural products and marketing.

While delving into the intricacies of supply chains for products, Hamilton became deeply involved in the Fair Trade movement, which works to help improve conditions of producers in developing countries, and advocates for environmentally sustainable practices.

Hamilton enrolled in the Citizen Scholar program, a two-year course at UMass that teaches students how to become activists, and became interested in how government policies can be a driving force for good. She was part of the committee that helped Amherst become the fourth recognized Fair Trade community in the U.S.

After graduating in 2008, Hamilton returned to Gilsum and began working as the product developer for Badger.

She also uses her position as a businesswoman to lobby for policies that she believes in at the local and national level.

“Politicians listen to business more than they do to individuals, for better or for worse, and so as a business we have a powerful voice and we should use that to support what we think is right for our community,” she said.

In that role Hamilton has helped pass policy on the state level, such as the Benefit Corporation legislation in 2015.

A Benefit Corporation, or B-corp, is a certification, like Fair Trade, that says a company meets certain social and environmental standards that benefit the community.

Hamilton has also been involved in national policy. Since 2012 she has been working with members of the U.S. Senate on safe cosmetics legislation that seeks to update U.S. Food and Drug Administration regulations for cosmetics.

In 2014 Hamilton was invited to the White House to discuss policies for small businesses as part of the Working Families Summit.

Meanwhile, Hamilton had another life altogether as a performer. In 2008, the same year she returned to Gilsum, she and her Hawaiian fire-dancing troupe were invited to be staff performers at the annual Burning Man festival that takes place in the Black Rock Desert of Nevada.

Burning Man is a festival where a temporary town is constructed in the middle of the desert, with large, interactive art displays. At the town’s center, a wooden man is constructed, and is set ablaze at the event’s conclusion. Hamilton’s role was to fire dance around the statue as it burned.

It was at Burning Man that Hamilton became interested in experiential art.

In 2012 Hamilton met Danya Pugliese, who had a background in visual art. Together they formed Machina Arts, through which Hamilton says that she manifests experience by combining art, performance and music.

Machina Arts is a for-profit collective that curates pop-up events in nontraditional gallery environments, but Hamilton and Pugliese are now looking to create a permanent home for their artistic project. Hamilton wants to bring the experience and principles she gained in the business world to the new endeavor.

“For many years my artistic life and business life were 100 percent separate,” she said. “It took me a long time to integrate the two in a way that felt comfortable.”

At a glance: Rebecca Hamilton