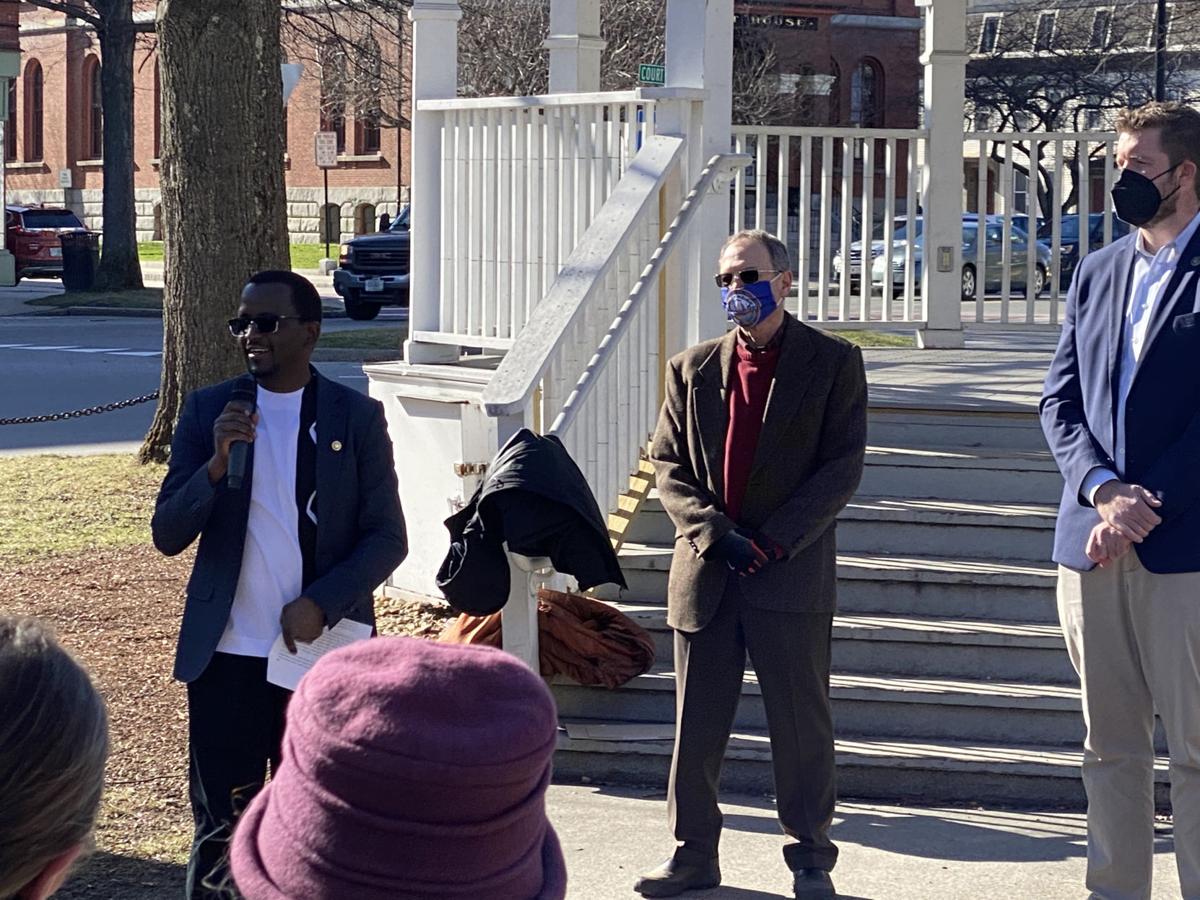 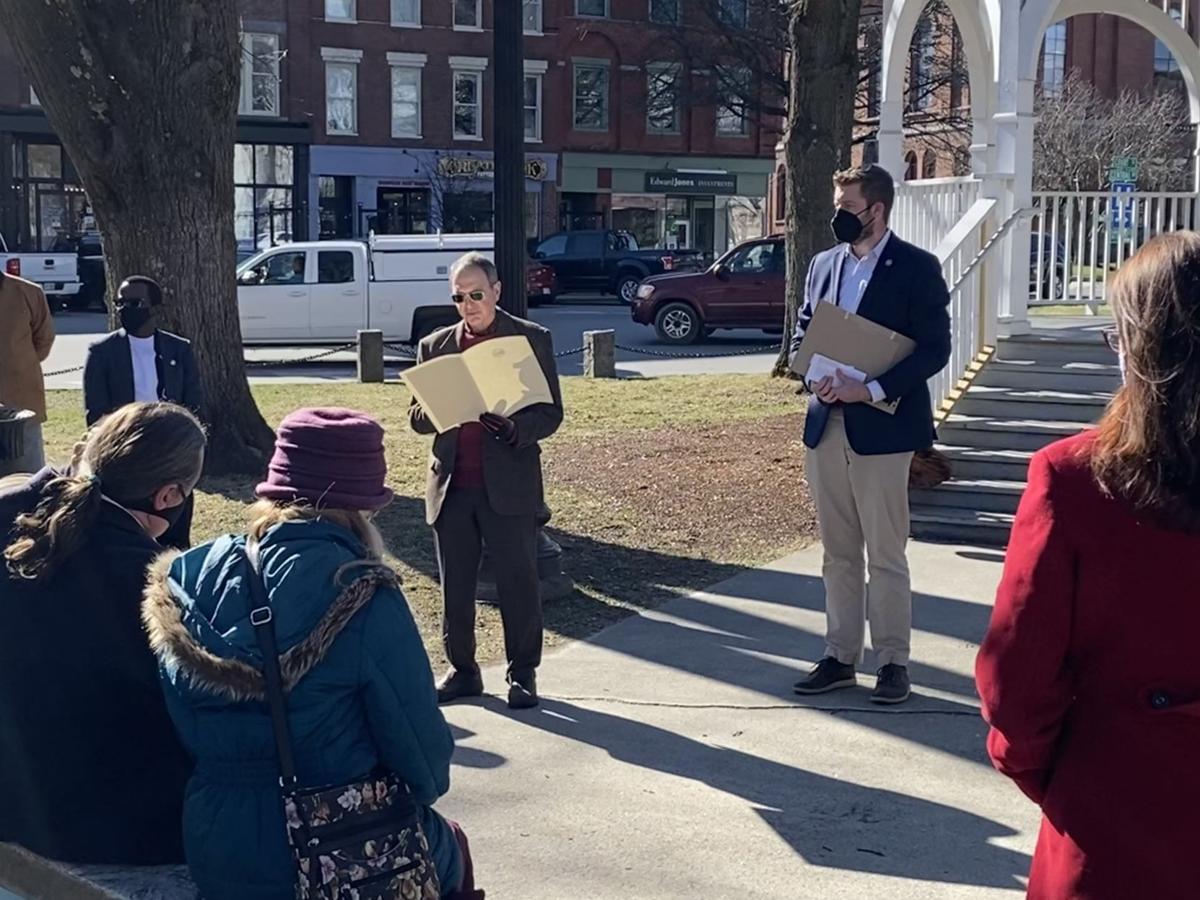 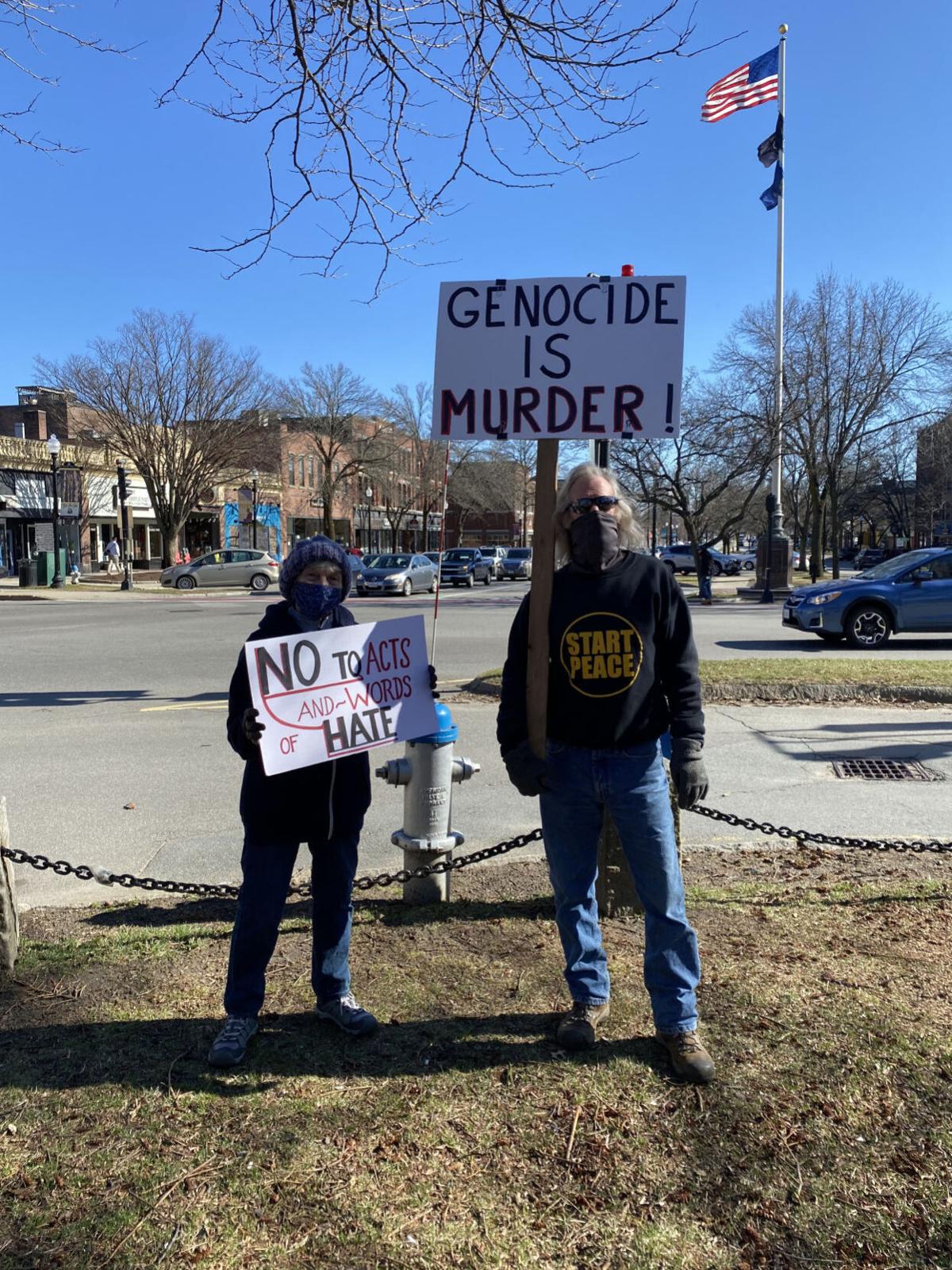 Roughly 11 years after leaving Rwanda to move to Keene, Yves Gakunde remembers what it was like to live in a country plagued by prejudice and genocide.

In observance of Genocide Awareness Month, which runs throughout April, Gakunde joined several other community members Monday afternoon in Keene’s Central Square to discuss the impact of previous genocides and to stand against those taking place right now. While genocide may feel like something that happens far away, or in the distant past, no place is immune to hatred, he said.

“Yesterday it was Rwanda, or Cambodia, but tomorrow, or after tomorrow, it could be in any other country, including our community,” he said to the crowd on Monday. “’You may think people have moved on because so many years have passed. Well, my friends, it may be history for you, but it’s [a] current life story for many of us, including myself.”

Gakunde stressed that the scars from genocides are still widely felt, that people are still struggling to survive this type of violence, and that it’s important to teach the consequences of bias and hate, particularly to children, to prevent such atrocities in the future.

“Look at what’s around us,” he told The Sentinel Monday. “There’s a growing number of victims of genocide, and there’s religious and racial hatred. It’s present on a regular basis.”

Kahn said the legislation, which Sununu signed into law in July, is still in the process of being implemented. However he noted that one directive of the law — which required the state to form a commission to study genocide education — has been met. That body includes legislators, educators and community and religious leaders, he said.

Another speaker on Monday was Ken Jue, a former CEO of Monadnock Family Services who, like Gakunde, reminded people that no community is immune to genocide. Jue, who is Asian-American, pointed to the increase in violence against Asians and people of Asian descent since the start of the pandemic, including this month’s shooting spree in Atlanta that left eight people dead. The victims included six Asian women.

Monday’s event featured several other speakers, including Mayor George Hansel, Cheshire County Sheriff Eli Rivera, representatives from the Monadnock Interfaith Council and others. All of them spoke of ways the Keene community can work against the discrimination and hate that can fuel genocide.

“We are leading the state,” Hansel said. “Keene is the perfect-sized community to lead on a statewide, a national, and even a global level. With our connections that we have, with the Cohen Center being located here, and just the overall size of our community, we really do have a really powerful, loud voice.”

Peter McBride, who became the director of Keene State College’s Cohen Center for Holocaust and Genocide Studies last year, said the center has much planned in coming months to bring the conversation about genocide to the forefront.

McBride, who grew up in Northern Ireland during the Troubles — a long, violent conflict between republican paramilitary groups who favored a united Ireland and those who supported British rule in the north — said his goal at the Cohen Center is to take the lessons of history and teach people how to apply them to current events in the U.S. and around the world. He wants the center to be a place where difficult conversations can be facilitated, he said.

“My vision is that the Cohen Center will be a safe place where people can begin to think about some of these difficult issues that feel very personal and that people think of as being political,” McBride said. “They’re not political at all — well, in one sense of course they are, but in another they’re just a part of the human condition, and we need to find a way of talking about them.”