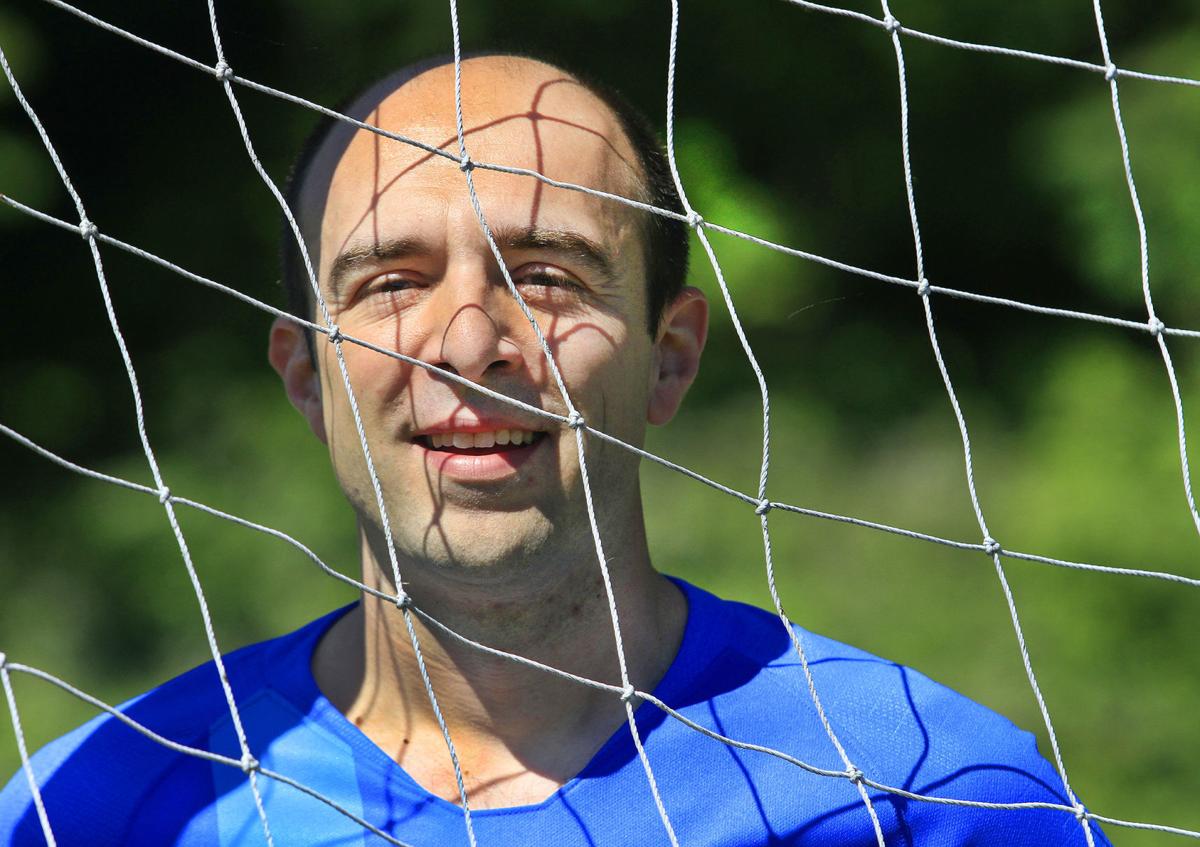 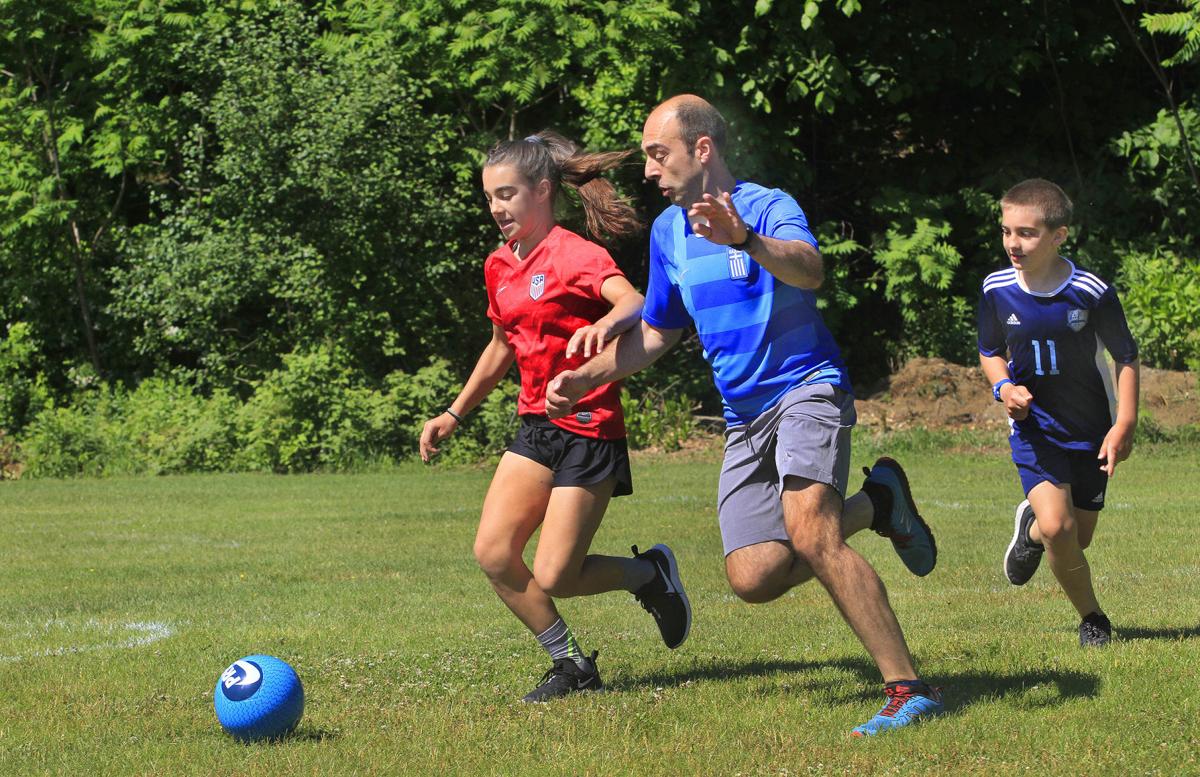 George Tsitsonis plays soccer with his kids, Mariella, 12, and Elias, 9, outside their Walpole home Wednesday.

George Tsitsonis plays soccer with his kids, Mariella, 12, and Elias, 9, outside their Walpole home Wednesday.

He would play with his dad, Elias, and sister Soula, on the net they set up outside their family business, Diamond Pizza in Walpole. When he got a little older, George and his friends practiced constantly on the field next to the town common.

“We named it the ‘Match Field,’ unofficially, and it was just kind of our ‘Sandlot’ or ‘Field of Dreams,’ ” Tsitsonis, now 40, said. “We’d play every day after school, in the summer, all the time.”

On family trips to his parents’ hometowns in rural central Greece, he would play with other kids in the town squares throughout the day and well into the night.

“Those types of experiences, for me, have always made me just fall further and further in love with the game,” he said.

After graduating from Keene State College in 2001, Tsitsonis applied his love of soccer to his interest in writing. Still based in Walpole, he began covering the game, particularly the Greek national team, as a freelancer for a variety of websites and magazines, the same sorts of publications he pored over as a kid.

But even with nearly 20 years of freelance experience, he never thought he could write a book.

Then, while researching a story about three years ago, he noticed a dearth of English-language accounts of Greece’s shocking underdog victory in the 2004 UEFA European Football Championship.

“So I started looking at it further, and one thing led to another,” he said. “I just started taking some notes down one random afternoon at my house. Then I got enough for a chapter, and I did a little bit of research and I was seeing that around three chapters was good for a submission. So I said, “Let’s just see where it goes.’ ”

Three years later, the result is “Achieving the Impossible: The Remarkable Story of Greece’s EURO 2004 Victory.” His first book, it was released June 12 by Fair Play Publishing, an Australian company founded in 2016 that specializes in soccer books.

“It is a dream come true, really,” Tsitsonis said of the work, which is the first known English-language book on the 2004 Greek soccer team’s triumph, according to its publisher. “Even when I was writing articles, I never thought I would be able to put something that comprehensive together on any subject. So the fact that I was able to complete that is really a dream come true, especially on that type of sporting achievement.”

Greece’s 2004 European championship, he added, is not only one of the country’s most significant sporting achievements, but also his own favorite sports experience.

“It was just a huge moment for Greek sports fans,” Tsitsonis said. “Because as passionate as Greeks are in soccer, Greece had, up to that point, zero success on the international level.”

The book begins with a brief overview of the history of Greek soccer, leading up to the team’s first World Cup appearance in 1994, which the United States hosted. Over the three games Greece played that tournament, the team gave up 10 goals and scored none.

“It was just a big debacle,” Tsitsonis said.

Greece didn’t qualify for another major international tournament until the 2004 European Championship, where they were 250-1 underdogs in the opening match against the host country, Portugal.

“So people were just hoping that they wouldn’t embarrass themselves again,” Tsitsonis said. “There was not much in the way of expectation.”

But Greece beat Portugal in that opening match, and as the tournament progressed, the team kept winning. Greece and Portugal met again in the final match on July 4, 2004, a day that George Tsitsonis, who was 25 at the time, remembers vividly.

“It’s July 4, so we’ve closed down our business for the day, and everybody’s at my parents’ house, which includes my grandparents, sister, friends, so a big group there getting ready to watch the game,” he said. “And I’ll just never forget when the winning goal was scored, literally just seeing everyone jump up in unison.”

After Greece’s 1-0 victory, Tsitsonis attached a Greek flag to his car, and drove through the back roads of Walpole and into Keene with his girlfriend, Sheila, who is now his wife.

“People were probably wondering, ‘Who are these crazy people?’ ” Tsitsonis said.

He channeled that passion into researching and writing his book, all while balancing it with his full-time job at Diamond Pizza, where he has worked essentially his entire life.

He’s done the same for his entire freelance career, which started shortly after he graduated from college when he pitched the idea of increasing coverage of Greek soccer to the British soccer magazine FourFourTwo.

He’s also written for publications overseen by FIFA, the world governing body for soccer. Since 2016, he has written a variety of news and feature stories for AGONAsport.com, the largest English-language site dedicated to Greek sports.

And while he typically watches matches, conducts interviews and writes stories from his home in Walpole, his freelance work occasionally takes him on the road. In 2013, for example, FIFA sent Tsitsonis to Los Angeles to interview Jürgen Klinsmann, who at the time was the head coach of the U.S. Men’s National Team.

Along with his freelance work, Tsitsonis also coaches his children, 12-year-old Mariella and 9-year-old Elias, on their soccer teams, and has been an assistant and goalkeeping coach at Fall Mountain Regional High School, his alma mater.

While juggling all of these commitments, Tsitsonis said he looks to his parents, Lambrini and Elias, who emigrated from Greece to the U.S. in 1970 and 1978, respectively. They opened their first restaurant, Walpole Village Pizza, in 1982, and launched Diamond Pizza in 1991.

“They made tons of sacrifices for us as far as the amount of time they put into their business, to keep that business going, to have it improve and to be able to have a life for them and their family,” Tsitsonis said. “... When you grow up seeing your parents do so much, it obviously has a big impact on you.

“... I feel like, as every generation passes, we have that duty and responsibility to try to do better for our kids,” he continued. “I know my parents did that for me, and I just try to do that for my kids.”

That’s why Tsitsonis said he wrote his book largely for his kids, “to just show them that if you just work hard, put your mind towards something, you can do whatever you want to.”

But his passion for soccer extends beyond his immediate family, said Christian Davis, who has known Tsitsonis since high school, and has played and coached soccer with him since then.

“His soccer IQ is just through the roof — as a fan, as a player, as a coach,” Davis said. “He’s been able to transfer from a player to a coach, and in doing that, he’s so incredible with the kids. The kids just take to him, and he’s just amazing. He fills them with confidence and builds them up.”

And when Davis found out that Tsitsonis was writing a book on the 2004 Greek team, he couldn’t wait to read it.

“Knowing that he was writing about something that was so passionate to him as that Euro Championship win, I knew it was going to be an incredible book,” Davis said.

Tsitsonis does not have any concrete plans for another book, but said he’ll definitely keep writing about, and playing and coaching, soccer.

“I’ve always been kind of interested in soccer stories away from the spotlight,” he said. “I’ve covered a lot of stories over the years about the state of soccer in places like Haiti or Rwanda or Liechtenstein, just kind of where the bright lights don’t shine. So I would like to put together a collection of stories from experiences that players have in those places, and I think just to show the global reach and the passion that soccer espouses all over the world.”

At a glance: George Tsitsonis