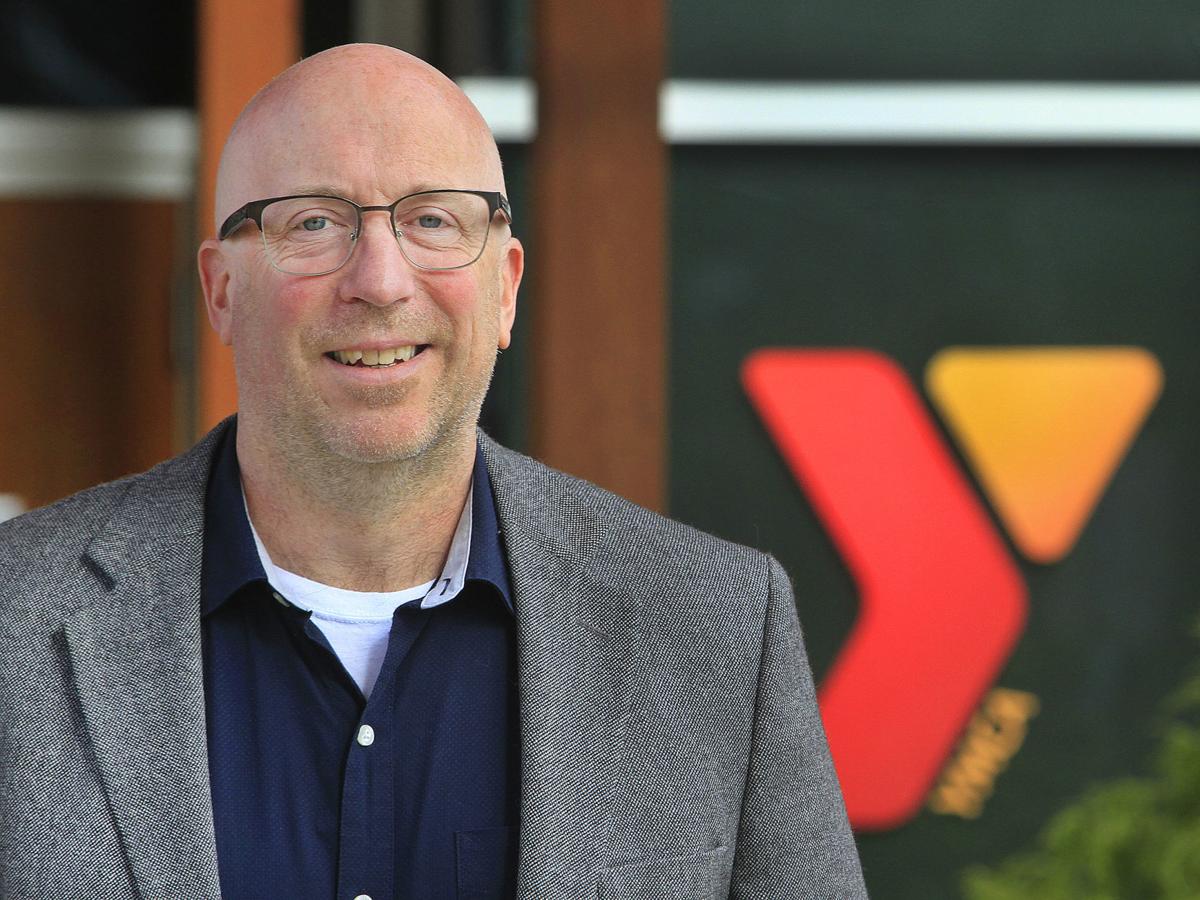 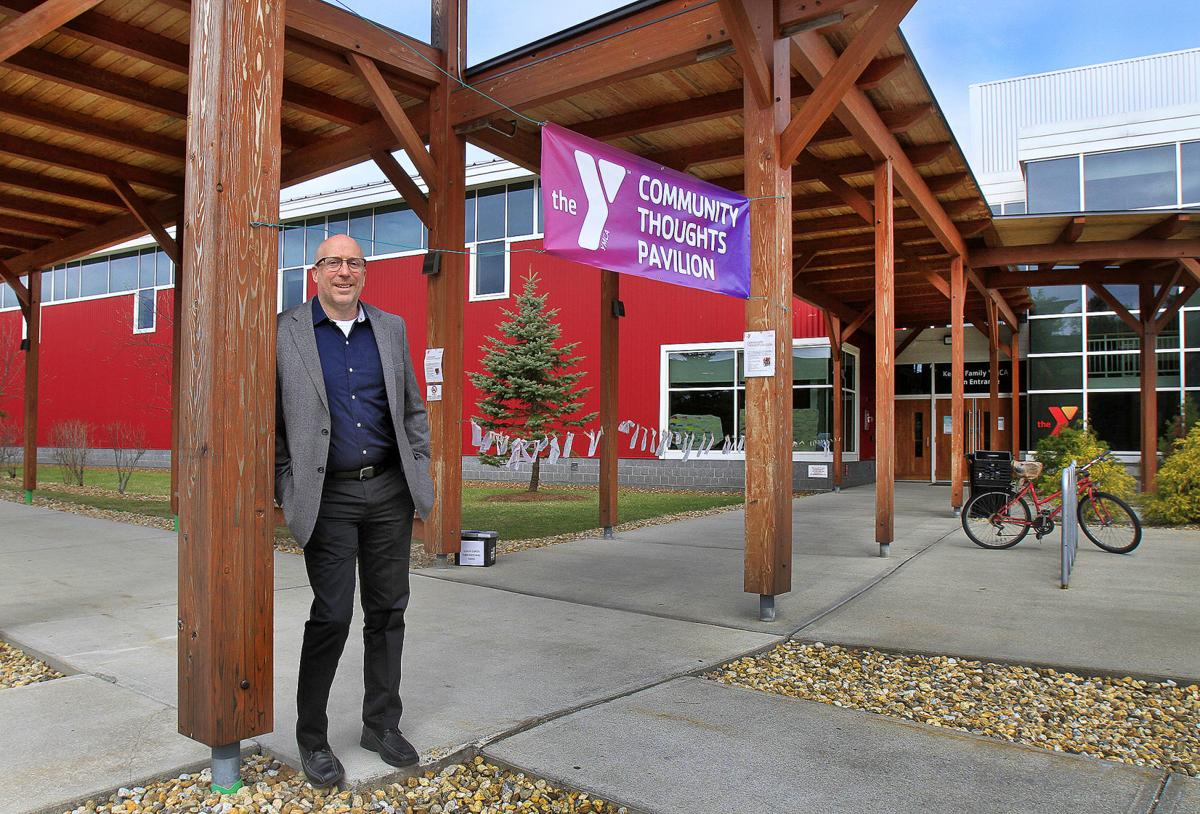 Dan Smith took over as CEO of the Keene Family YMCA last year, after leading a YMCA in Michigan.

Dan Smith took over as CEO of the Keene Family YMCA last year, after leading a YMCA in Michigan.

Sometimes the most seemingly inconsequential moments will pivot one’s life in an entirely new direction.

It happened to Dan Smith, 48, who took over as chief executive officer of the Keene Family YMCA last year.

When Smith was in college, he traveled to India on a semester-abroad program. One day, he was walking down a street in the small city of Mussoorie, near the Himalayas, and happened to run into a Buddhist monk, dressed in the traditional orange robes.

“It turned out he was from the Netherlands, and spoke English, so we started to talk,” Smith says. One topic led to another, and the subject of spirituality arose.

“I found myself listening to him while he explained his thoughts about faith. He said that we have choices to make in our lives, and one is to believe or not believe.”

At the time, Smith described himself as a skeptic about religion and the existence of God.

The conversation was probably no longer than a half-hour, and Smith recalls few details about the man himself, including his name. But “It led to a deeply reflective moment for me. Did I want to spend my life believing in God, or not?”

The monk’s words stayed with him, and after he returned to Hartwick College in Oneonta, N.Y., they sparked what he calls his “journey of faith.”

“When you choose to believe, your life has purpose. If there isn’t a God, or an afterlife, then what’s the point? I believe in Jesus Christ because of a Buddhist monk in India,” he says.

That decision guides his life and career.

After graduating with a bachelor’s degree in theater arts, the young Smith took a job with a community theater group in Midland, Texas. For 10 months, he both performed and built sets for drama productions.

“It was there I had to lose my Boston accent,” he says with an actor’s clear, steady diction. He was raised in Mansfield, south of Boston. “I think I’m a good observer of human behavior, and I think I got that from the theater; you have to study people if you want to act.”

But life in the theater world wasn’t scratching the itch he had to contribute to the betterment of mankind.

“I really wanted to do more, tied to my personal faith journey,” he explains.

He got a job with Habitat for Humanity, a Christian organization founded in 1976 that now operates in all 50 states and more than 70 countries, helping disadvantaged people build or rehabilitate homes.

“They had an opening in Papua New Guinea, then their most remote location,” he says. “I told them, ‘Hey, that sounds kind of cool,’ because it merged my hunger for travel with my personal faith. We were viewed as missionaries. It was a calling.”

After orientation and training, “They just deposited me in a village and drove away.”

He suddenly found himself in a totally alien environment, a place called Kukura. He didn’t speak the language, and there was no running water or electricity. “It was really just subsistence living.”

However, the villagers welcomed the new arrival and promptly built a home for him similar to their own, with walls made from palm fronds, the floor from palm tree bark, and a grass roof.

There were no doors on the homes, just openings from which they came and went, he explains, because they burned palm fronds inside to drive away rats and lizards.

“The lifespan for the natives was short, mainly from living with that smoke in their homes, so I didn’t do that,” he says. “I just lived with the occasional rat or lizard falling on me while I slept.”

Smith found that life in the village was a significant challenge for someone who had grown up with the comforts and luxuries of an American suburban life.

“For the first six months, I was like a baby; I had to learn how to walk, how to speak, how to eat. Walking was difficult with shoes, so I went barefoot. They get from 200 to 400 inches of rain a year, so you have to walk by gripping your toes to gain traction on the soft clay. I walked everywhere, so I was in incredibly great shape, and skinny.”

He spent three years there, helping build new homes for the residents of eight villages, using more modern materials and technology, and lumber they milled from local trees.

He says he adapted well to their culture and lifestyle.

“I learned to speak Tok Pisin and some Tok Ono. Papua New Guinea has more than 800 different languages.”

But there was one aspect of his relationship with the residents that he couldn’t change.

“I was taller than everyone, at 6’ 1”, and the tallest person in the area only came up to my chest.”

The experience was wonderful and broadening, he says, and taught him a great deal about life and the bonds that can form among men and women of different cultures.

After his stint in the village, he was promoted to regional trainer for Habitat for Humanity for the South Pacific, and for six months traveled from island to island, supervising the agency’s projects.

Then he was assigned to Habitat’s regional office in Fiji, where he stayed for two years. It was there that he met his future wife, Maggie, who also worked at Habitat.

“An office romance,” he says.

Maggie had been born and raised on Rotuma, a tiny island with a population of 1,500, one of the 300 islands that make up the archipelago of Fiji.

Smith had to secure permission from Maggie’s parents to date her, “Western style,” he explains, as the custom in that country is for couples — and marriages — to be set up by family arrangement.

In 2000, a military coup in Fiji caused Habitat employees to be evacuated, and the couple headed to the United States. While there, he introduced Maggie to his family in Massachusetts.

They were allowed to return to Fiji a month later, after the coup was over.

By 2002, then married, the couple wanted to raise a family, and decided to do so in the U.S.

That year, Smith was hired as executive director of Michi-Lu-Ca Conference Center and Camp in Fairview, Mich., a city of about 8,000 people in the northern part of the state. The name stands for Michigan Lutheran Camp.

In addition to managing and expanding the 40-building conference center and camp, Smith established the Living Water Ministries, a shared mission of the Lower Michigan Synods of the Evangelical Lutheran Church of America and the Episcopal Diocese of Michigan.

By now, the family included two daughters, Hanisi and Hefrani.

In 2010, Smith became the CEO of the Cadillac Area YMCA in Michigan, a community — and a YMCA — with a footprint very much the same size as Keene.

Smith learned about the opening at the Keene operation through the organization’s job network.

“I immediately researched Keene. We wanted a bit more diversity than Cadillac, but still a place with small-town American values,” he says.

“I wanted a CEO’s position, and we wanted to move to the East Coast, and we wanted to be within the radius of Boston Children’s Hospital,” he explains. Their younger child, Hefrani, now 14, was battling a rare form of cancer and undergoing treatment at the University of Michigan Medical Center in Ann Arbor, about 200 miles from their home in Cadillac.

She was suffering from what is called a SPEN tumor, its official medical name solid pseudopapillary epithelial neoplasm of the pancreas, which most often shows up in young girls. Her treatments were not proving effective, and she was showing signs of liver failure.

While this was all going on, Smith was in the interview process with the Keene Family YMCA. Then, in April of last year, after a national search, the Keene board hired him to replace Helene Mogridge. She had held the job since 2012, shortly after the YMCA had moved from its longtime home on Roxbury Street to a new building on Summit Road.

“I accepted the job on a Thursday, and the next day we received word that our daughter had earned a place on the list of those who were eligible for a liver transplant,” he says.

Unfortunately, Hefrani “scored” very low on the priority list for a new liver. “She was given only six points, where you usually need 40 to 50 points to get a liver. It was almost 99 percent certain she wouldn’t get one.”

Then, a sudden lucky break.

“One week before we were to move to Keene, we got a call from the University of Michigan, and they said, ‘We got a liver.’ “

Everything for the move was placed on pause. Hefrani spent six days in the hospital for the transplant, then returned for another two weeks when complications arose. The family had to arrange for temporary housing in Ann Arbor, and Smith was packing up their home in Cadillac, placing their possessions in storage. He also had to work on finding temporary accommodations for his relocation to Keene.

After it became apparent his daughter was on the road to recovery, Smith moved to the Elm City in June of last year, while Maggie and their two daughters stayed in Ann Arbor until August. Hefrani has been declared cancer-free, the transplant is a success so far, and she is enrolled in Keene Middle School. Their other daughter, Hanisi, is a student at Keene High School.

But because of the COVID-19 pandemic, and especially Hefrani’s medical conditions, the family is in complete isolation. Smith is living in a closed-off room at home due to the fact that he often goes into work.

“Our last year has been a difficult challenge,” he says, in what might be construed as an understatement.

Still, he explains that his coping mechanisms have helped him weather these significant and stressful events.

“I don’t look at all the worries in the aggregate, just at the challenges tied to that particular day. If I cry, I die,” he says.

“There are two types of people, fighters and those who flee. You cannot be paralyzed by your fear or worry.”

Smith has implemented a number of new initiatives at the Keene YMCA, including new marketing programs to raise more funds and recruit more members. He has also developed additional fitness programs, and buttressed its day-care, a mainstay of the Keene Y and its largest program.

The pandemic has caused the Y to close temporarily, with its only current onsite program a day-care operation for the children of medical personnel and emergency responders. Smith says the organization has applied for a $450,000 loan under the CARES Act to ensure it can keep paying staff for the time being.

Meanwhile, he goes into his office each day, keeping the fires lit and waiting for when it can reopen.

Through it all, he’s applying his own rule — pay attention to the challenges of each day — and relying on his faith that there are brighter ones ahead.

At a glance: Dan Smith