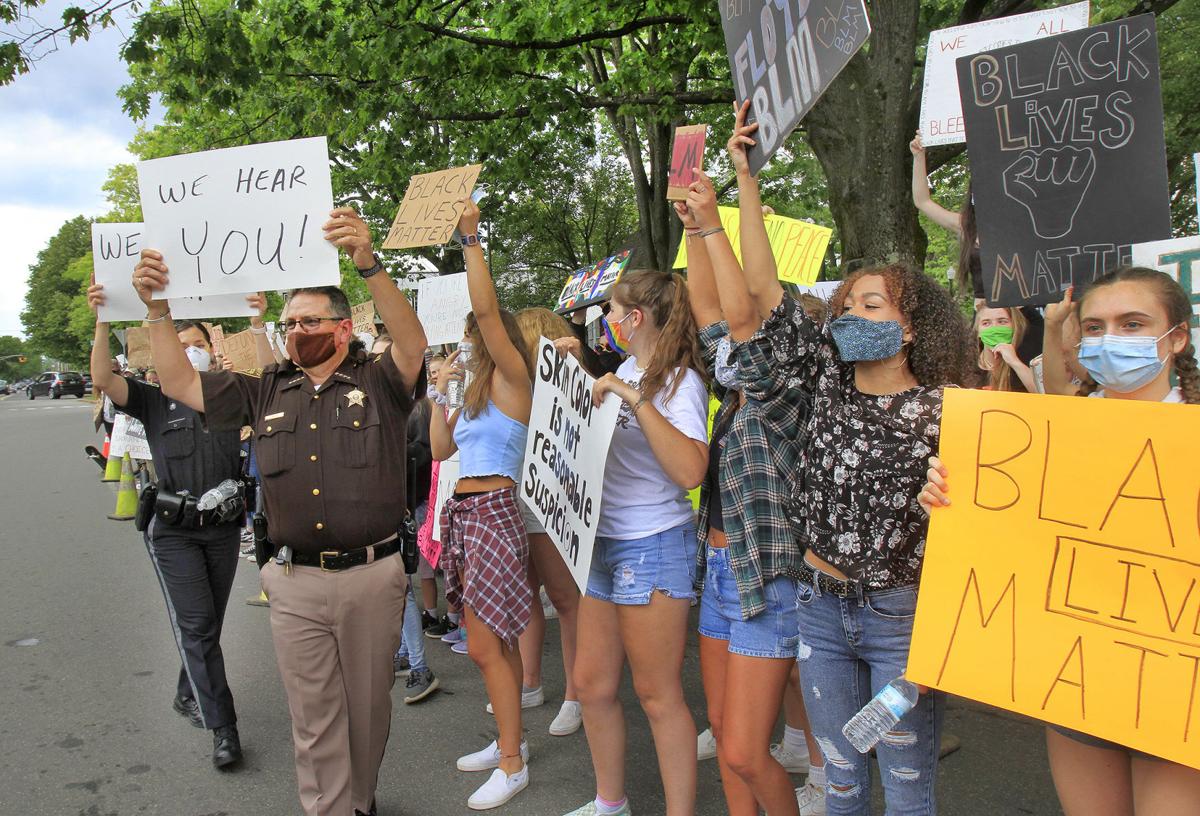 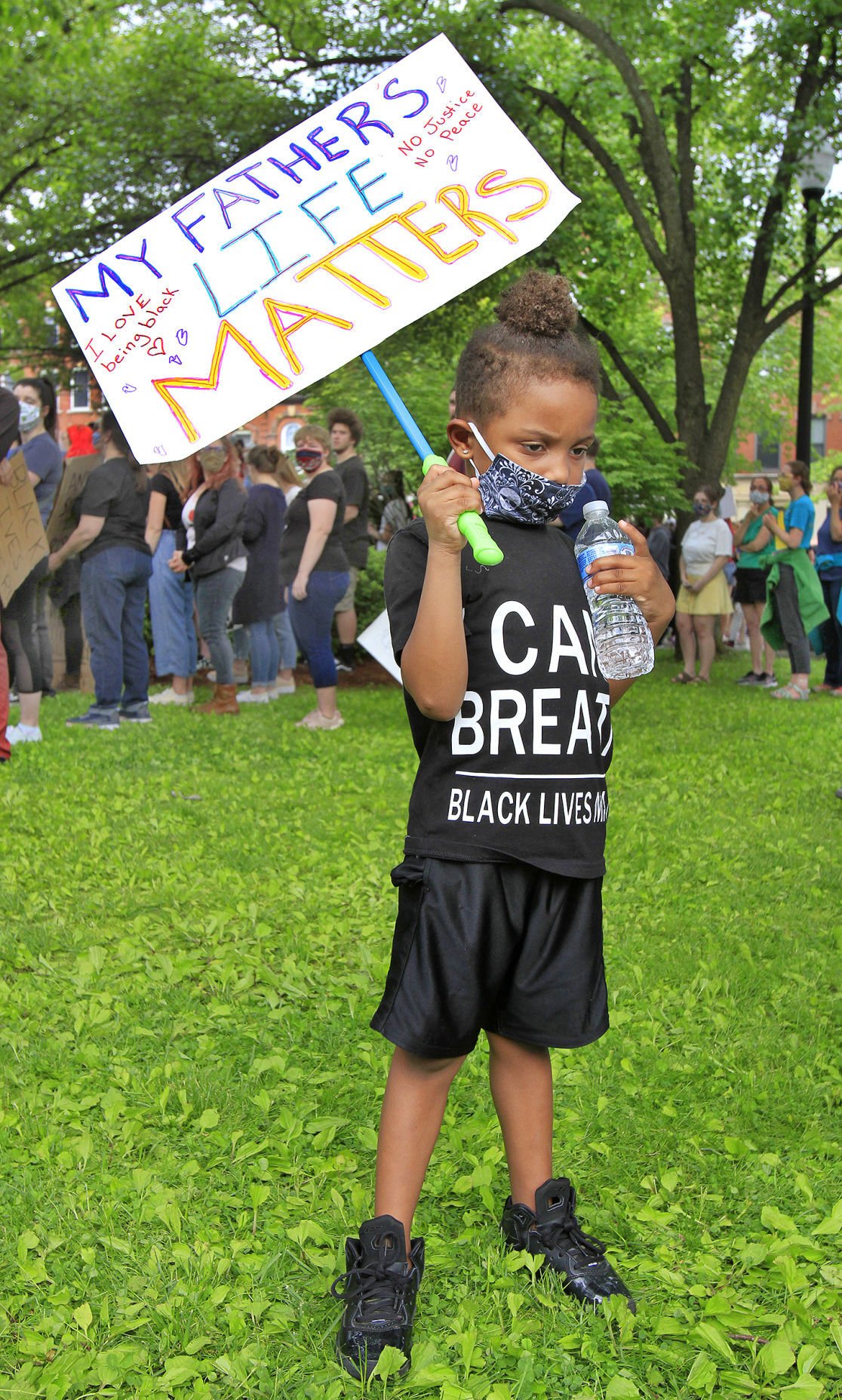 Justin Rivera, 5, of Brattleboro, was one of hundreds in Keene's Central Square at Wednesday's rally against racism and police brutality. 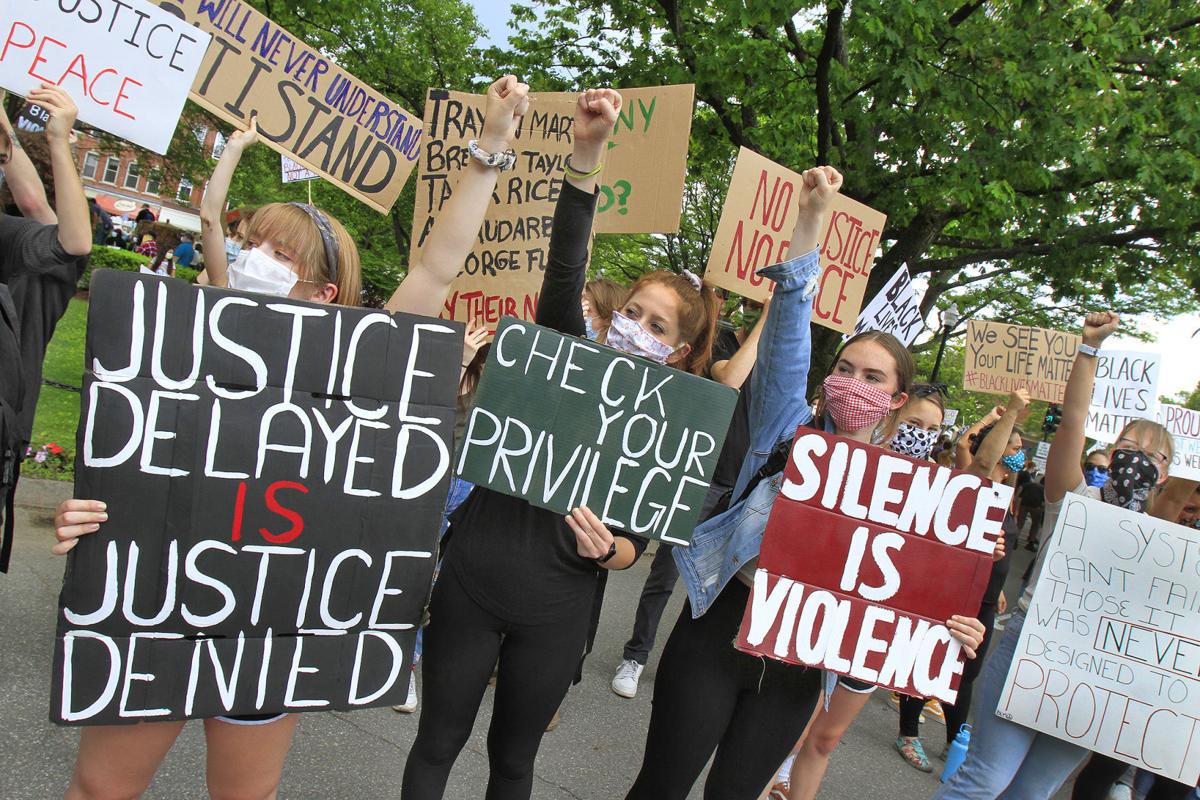 Hundreds gathered in Keene's Central Square Wednesday to raise their voices against racism and police brutality. 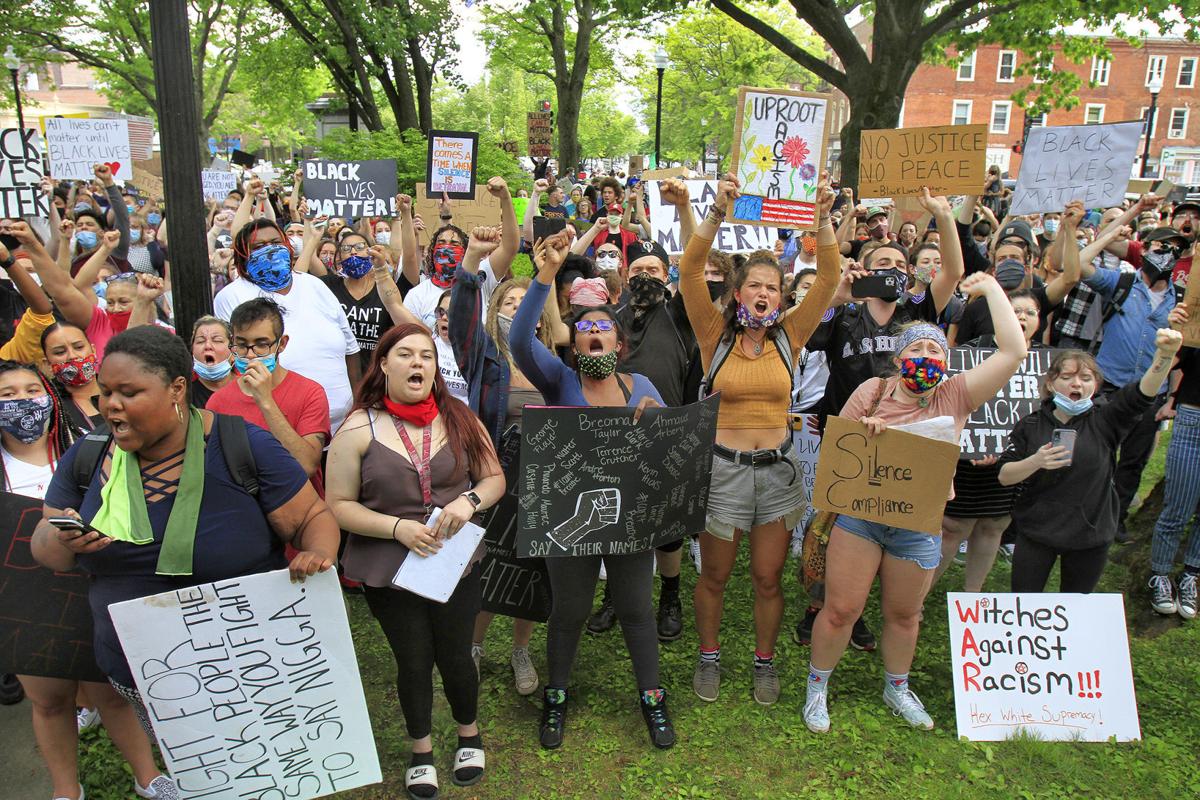 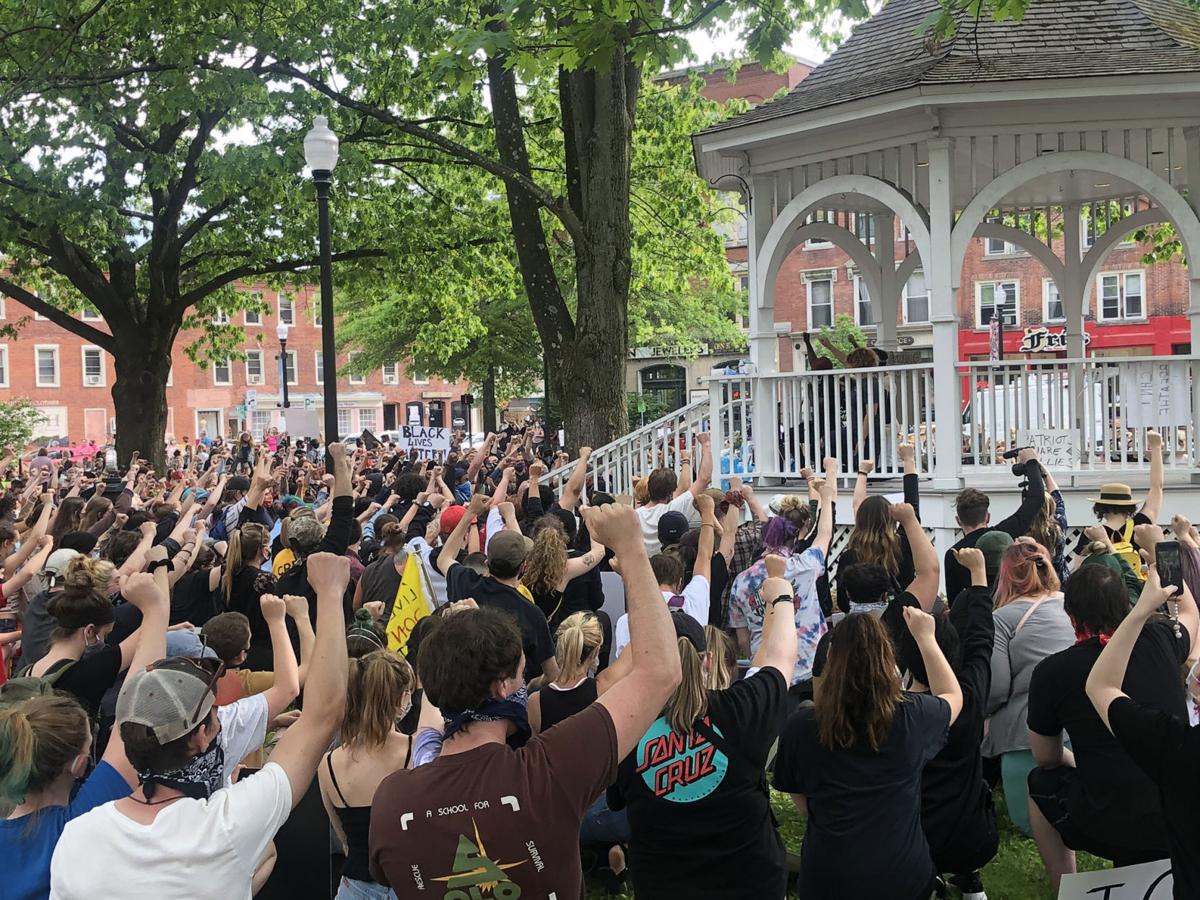 Justin Rivera, 5, of Brattleboro, was one of hundreds in Keene's Central Square at Wednesday's rally against racism and police brutality.

Hundreds gathered in Keene's Central Square Wednesday to raise their voices against racism and police brutality.

Central Square was a sea of signs Wednesday evening, as hundreds of people gathered in downtown Keene to speak out against racism and police brutality in the wake of a black Minnesota man’s death last week in the custody of Minneapolis police.

Protesters held signs that said “Black Lives Matter,” “No Justice, No Peace” and “I Can’t Breathe,” the latter a reference to the words spoken by George Floyd as Minneapolis police Officer Derek Chauvin knelt on his neck. They chanted things like, “Say his name,” to which other protesters responded with “George Floyd.”

“We deal with this all the time,” said Vanessa Sanchez, who is black and came from Brattleboro with her family to participate in the protest. Motioning to her grandchildren, she added, “In 2020, they shouldn’t have to worry.”

Another protester, Sanchez’s daughter Monique Martin, also from Brattleboro, said she came out to show the youngest members of her family how to advocate for themselves. She said she was there to stand in solidarity with those calling for an end to police violence.

The protest follows scores of similar events held around the world in the week since Floyd’s death. Locally, there have been smaller protests in Dublin, Keene, Peterborough and Winchester, and a large protest was held Sunday in Brattleboro.

According to the Washington Post’s Fatal Force database, 236 black people died at the hands of police officers in 2019 compared to 371 white people, out of a total of 1,004, with the race of 200 people listed as unknown. However, according to the U.S. Census Bureau, 76.5 percent of the U.S. population was white as of 2019, while just 13.4 percent was black.

As people stood close together on the lawn in the middle of Central Square, the social statement took priority over social distancing, although the majority of protesters wore masks.

Despite the violence seen at demonstrations elsewhere, Keene’s protest remained peaceful, even as a small group of counter-protesters flying a campaign flag for President Donald Trump arrived and circled Central Square for about a half hour.

Police were stationed in pairs in a handful of locations, and Keene Police Chief Steven Russo, Officer Cristina Paterno and Cheshire County Sheriff Eli Rivera carried signs of their own: “We hear you.”

“Actions such as this break the faith and trust we have with our community,” Russo said in a news release issued Wednesday ahead of the protest. “These illegal, unethical and immoral criminal acts do not in any way represent the values of the Keene Police Department nor our commitment to our community and the protection of all those entrusted to our care.”

Though the participation of local law enforcement in the demonstration did not go unnoticed, some protesters said they’d rather see police take action from within. Ajenai Hampton of Brattleboro said she wishes law enforcement agencies would take the time to review their training policies and ensure that officers aren’t too quick to use deadly force.

“It’s nice to see, but at the same time, they should be doing more work on the inside,” said Hampton, who is black. “I personally don’t think, at this point, there can be any kind of justice until there’s a complete overhaul of the criminal justice system.”

While Central Square was packed with protesters, others were standing in front of businesses off to the side, and a ring of people formed around the square. A group of motorists circled the roundabout, chanting and also displaying signs.

One of them, Ash Broussard of Fitzwilliam said she was there to take a stand against injustice. Broussard, who is white, said a first step toward achieving justice for Floyd would be to hold accountable all of the four Minneapolis police officers who were present as he was dying, but there’s a lot of work to do to truly achieve justice.

“First is taking down the cops involved, but that’s just the tip of the iceberg,” she said. “This is the straw that broke the camel’s back.”

According to The Washington Post, authorities on Wednesday upgraded murder charges against the former Minneapolis police officer who pinned George Floyd to the ground by his neck, while charging three other former officers who were at the scene with aiding and abetting the killing. Chauvin now faces a charge of second-degree murder in addition to third-degree murder charges filed last week.