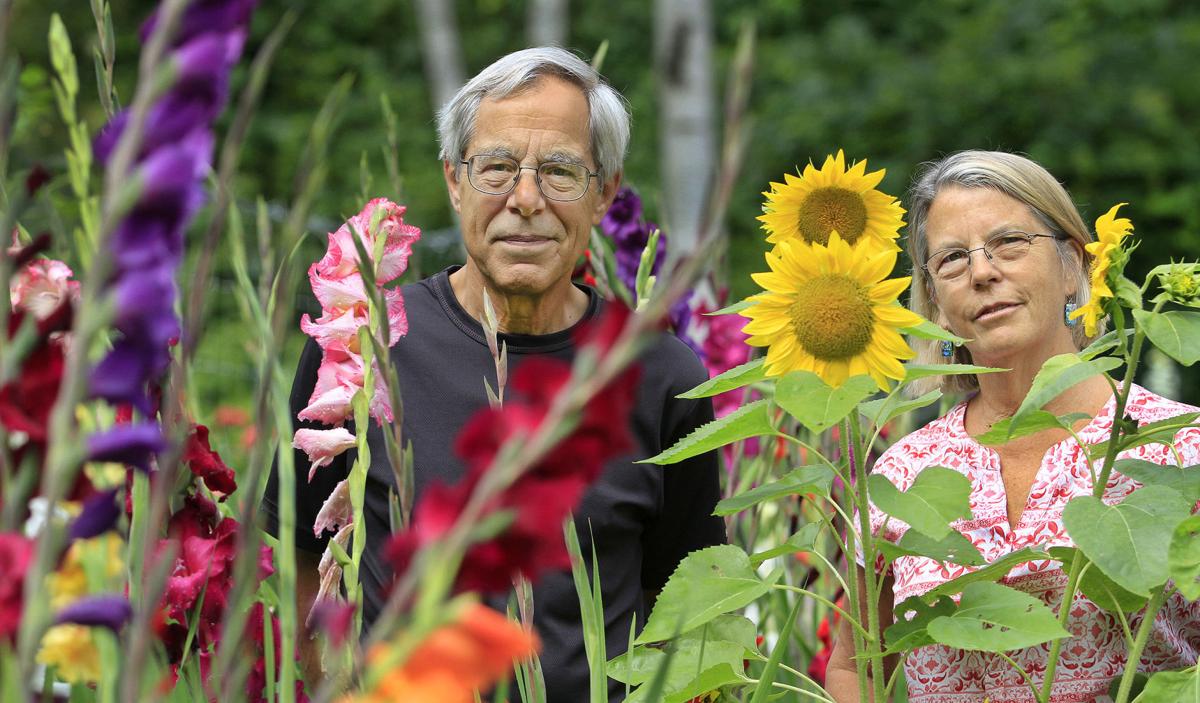 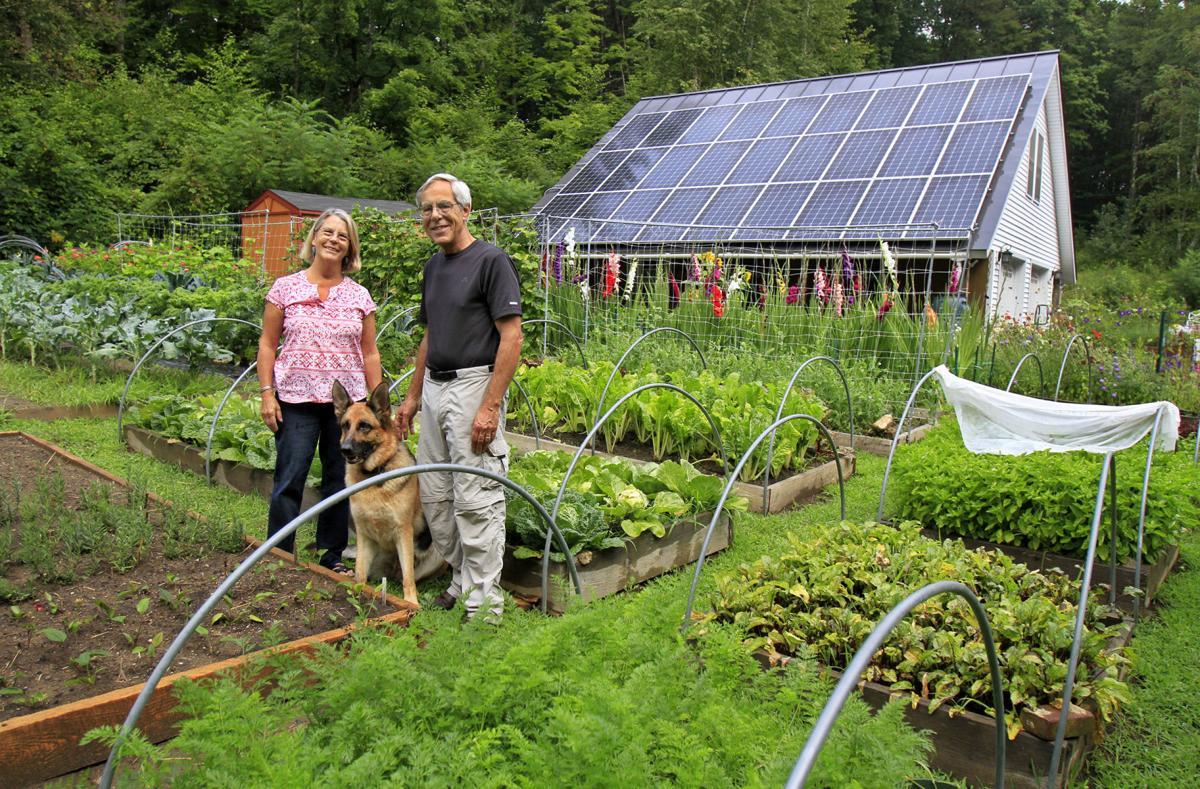 Joy and Steven Guerriero of Pisgah Farm in Spofford, with their German shepherd, Emma.

Joy and Steven Guerriero of Pisgah Farm in Spofford, with their German shepherd, Emma.

SPOFFORD — As so many places out in the country around here demonstrate, even the satellite technology of Google Maps isn’t sufficient for certain locations, and it fails miserably on some of the older rural roads, guiding motorists to dead ends

Instead, one must rely on landmarks, as people have done for hundreds of years.

“Take Route 9 west from Keene … you will pass Howard’s Leather Store on your right,” Steven Guerriero, owner of Pisgah Farm in Spofford, instructs via email. “The next left turn in about a half mile is Old Chesterfield Road. (If you pass it you will see a store on your left (Big Deal) turn around!)”

He continues. “Make a left on Old Chesterfield Road (Spofford Fire Station is across the street.) After you take a left on Old Chesterfield make your next immediate left on Tuttle Rd. Make your second right on to Old Swanzey Road. The road will level off at the top and there is an intersection (Y) where you go right — pavement ends and you go on to gravel road. There are two houses on the right (newer construction.) Go down the road about 1000 feet off the intersection and you will see an old white house on the right up on a knoll. The address is on a tree next to the driveway.”

Technology won’t ever be able to beat those instructions. (And still, the driver gets lost.)

Of course, most residents who live in the Spofford and Chesterfield area know where Pisgah Farm is; only newcomers — flatlanders — wouldn’t know that. It’s where Steven and Joy Guerriero have lived since 1983. Before that, it was an abandoned sheep farm that they fixed up into a place that now specializes in growing vegetables and flowers that they sell at the Chesterfield Farmers’ Market on Saturdays and also use in their catering business.

However, their story is about much more than simply being owners of Pisgah Farm. It’s the saga of a married couple, now both 68, who long ago escaped the crowded confines of New Jersey and with hard work and perseverance, carved out careers and a busy life in the hustings of New Hampshire.

“I’m over here,” Steven shouts, greeting the visitor while standing behind a large construction dumpster near the house. It’s there because they’re having a new kitchen built in their home to accommodate cooking classes that he will be starting this fall. He’s also holding back a purebred German Shepherd, Emma, who is apparently eager to do some sniffing.

Off to the left of the gravel driveway are beautiful gardens exploding with vegetables and carefully cultivated rows of flowers in full bloom, vibrant colors showing off in the bright afternoon summer sunlight. Butterflies and dragonflies float about, and the sound of crickets fills the air. There’s the fragrance of fecund soil, an old barn to the side and a pyramid of firewood nearby. This is definitely the country.

“Come on, sit down,” Steven says, pointing to a shaded patio in the rear of the house. “My wife, Joy, will be joining us. She’s coming from work.”

Guests are always welcome at the farm — “it gives us a chance to sit down,” he says, smiling. “I’m up from 6 to 6 working around here; you don’t get to sit down much.”

Joy arrives, having come from Keene, where she’s the administrative director of the Antioch Psychological Services Center, part of Antioch University New England. She also works the farm with her husband, a job that starts early in the morning and resumes when she returns home in the late afternoon.

“I started this morning cutting and arranging flowers,” she explains, after she’s slumped back in a comfortable Adirondack chair on the patio.

“You know, when you’re growing things, there’s a level of commitment; you have to be here,” he says. “All this begins with seeds I start in March and April.”

Pisgah Farm is one of the local farm-to-table endeavors, but the Guerrieros haven’t always been in this business. It’s something that is relatively recent, starting six years ago when Steven retired from a career in higher education as both a faculty member and administrator.

Before that, area residents may recall the couple as the owners of a popular restaurant in Keene in the 1980s, Guerriero’s Café, first located on St. James Street and later at the Colony Mill.

“I’ve always been around food,” Steven says. “I grew up in a big Italian family, and the Italians love their foods. My father loved to cook. We grew up eating what’s called Italian peasant food — pastas, spaghetti, lots of fresh vegetables.”

Both Steven and Joy grew up in Chatham, N.J., he the son of the owner of a road-paving construction company and she the daughter of a financial executive in New York City. Both of their mothers were nurses.

They knew of each other in high school through Steven’s brother, but didn’t begin dating until after college. They married Dec. 29, 1972, while Joy was working in the admissions department of Fairleigh Dickinson College (now university) and Steven was a case worker in the public welfare department of Morris County, N.J.

In 1978, their first child — son Rejean — was born, and the couple began thinking about moving from the dense population of the greater New York City metropolitan area, which includes Chatham.

“We always fancied having a home in the country, and with the salaries we were earning, we couldn’t afford that kind of thing in New Jersey,” Steven said.

They began scouring The Wall Street Journal and The New York Times for advertisements for businesses in rural areas that they might be able to buy. Through a business broker in Brattleboro, they ended up leasing the Spofford General Store in 1980, with the option to buy.

For two years, they managed the store, living above it. But they felt its sale price was too high, so they chose not to buy it. By then their second child — daughter Sarah — had arrived, and Steven got a job as the manager of the Pine Grove Springs Golf Course in Spofford.

Then they put their furniture in storage and moved briefly to Rockport, Maine, where Joy’s mother had a house. While they were there, Steven enrolled in a three-month intensive course at The Culinary Institute of America in Hyde Park, N.Y. When he finished, the couple started looking for a restaurant to buy. That brought them to Keene, where they purchased The Square Deal restaurant on St. James Street behind Syd’s, and reopened it as Guerriero’s Café.

At the same time, developer Emile Legere was completing the renovation of the Colony Mill in Keene, having converted it into a retail center. The Guerrieros knew Legere through a connection they’d made at the Spofford General Store.

“Emile told me he wanted an Italian restaurant at the Colony Mill,” Steven said, so in 1983, the Guerrieros moved their eatery to the annex building at the mill that now houses Keene Casino.

The restaurant turned out to be a big success, Joy says, and she produces an album of photographs showing staff and customers from that time. Steven served as its chef, and Joy worked what in restaurant parlance is called “the front of the house,” meaning she managed its personnel and finances.

The experience was exhilarating, but the restaurant’s success came at a price, Steven notes.

“We found out restaurants are a tough business. I was exhausted, and I wasn’t seeing my kids at all,” he says.

In 1988, Legere took over the restaurant, and Steven envisioned himself starting a restaurant-consulting business. Instead, he found a career in higher education, sparked by his earning a master’s degree in management from Antioch in Keene.

“It’s just another example of education being a great gift,” he says. “When I got into adult higher education, it changed my life. I always had the bug in me to teach, and it lit a fire under me.”

He took a job as director of adult continuing education for Franklin Pierce College (now university) at its then-Keene location. Two years later, he became director of graduate education at New England College in Henniker. In 1992, Joy began working at Antioch, and Steven joined the institution in 1993 as site director for its organization and management department. He rose through the ranks to eventually become Antioch’s vice president for academic affairs.

In 2009, he became graduate dean and vice president of academic affairs and dean of the faculty at Chestnut Hill College in Philadelphia, and traveled home to Spofford on weekends.

“In the five years I was there, I figured out that I’d driven 180,000 miles commuting, the equivalent of five round trips from Nome, Alaska, to Tierra del Fuego on the southern tip of South America,” he says. “When you drive that much, you think about things like that.”

“And I introduced him to books on tape,” Joy says, smiling.

He retired from Chestnut Hill in 2014 and then began his transition to farmer and caterer, a return to his first love — food.

“We’d always been avid gardeners and growers, we always had flowers, we canned our own food,” he says. “That’s what led to our interest in farm-to-table catering.”

It’s not an easy task. “We have been working and coaxing this rocky soil for many years, bringing in vast amounts of organic loam, compost and manure, while using every skill and planting possible to soften and strengthen the soil,” reads a descriptor of Pisgah Farm on its website.

The catering business has flourished, they say, with customers hiring them for small weddings, cocktail and dinner parties, as well as special events, such as family reunions, memorial celebrations and the like.

The work is a labor of love, Steven says, adding that he and his wife have always been a very compatible working team.

“I think what’s key is our work ethic,” Joy says.

“And there’s a very shared sense of accomplishment,” Steven adds. “I think that our relationship has always benefited by working together.”

Steven very much enjoys and appreciates this time in his life. Besides planning for the cooking classes he’ll be teaching later this fall, he’s also been quite involved in a creative writing group led by Keene writer Diana Damato.

“Writing for me is giving me a voice,” he explains, his preference being essays and poetry. On Sept. 8, he’ll host a daylong writers retreat at his farm.

It is now late afternoon, the shadows have elongated, and Steven has quite a few chores left in the day. He bends over and picks a handful of succulent tomatoes and plucks a small bunch of Neapolitan basil, a large-leaf herb somewhat rare in the United States but common in Italian food — in Italy.

“You know,” he says, somewhat reflectively, “we always have liked the country, and we’ve always worked hard.”

At a glance: Steven and Joy Guerriero