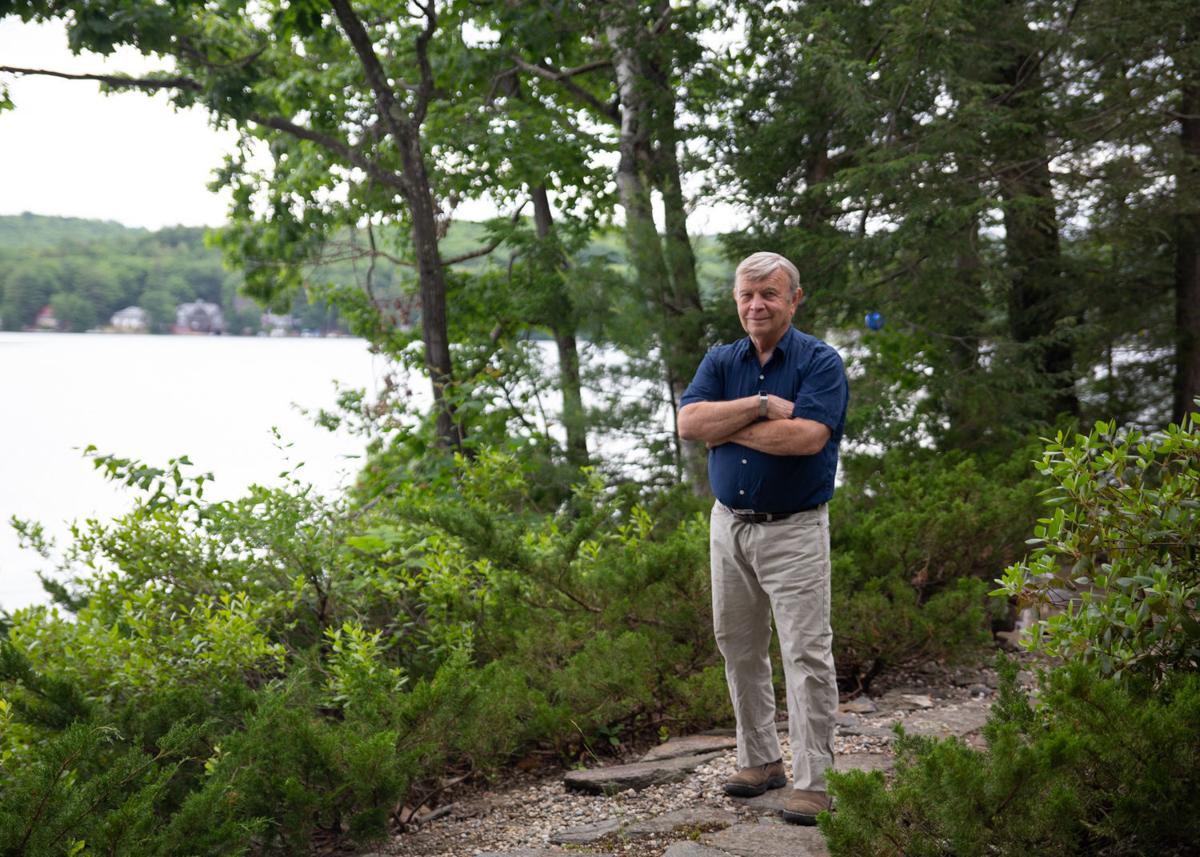 Bill Knaus, shown in his backyard on Spofford Lake on Friday, has spent more than five decades as a clinical psychologist, researcher, consultant, lecturer and post-doctoral instructor. 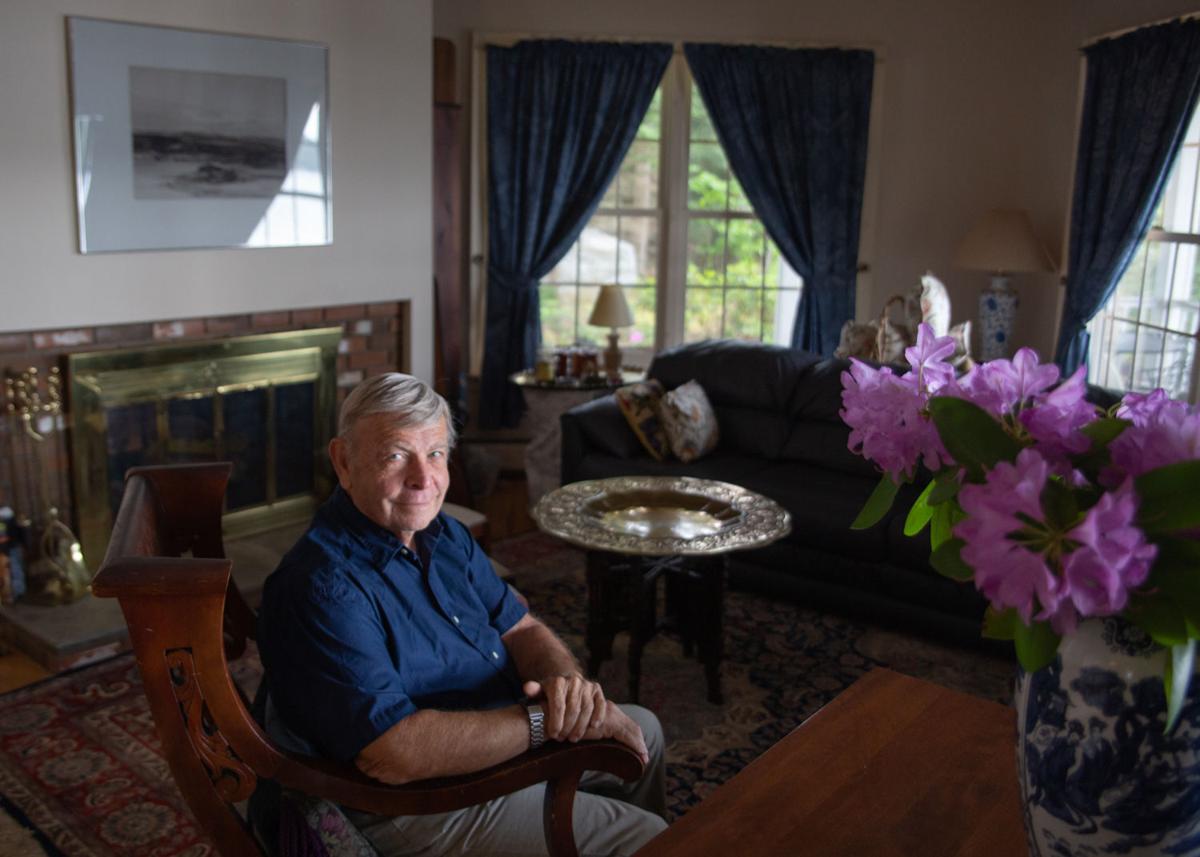 Bill Knaus sits in his home on Spofford Lake. 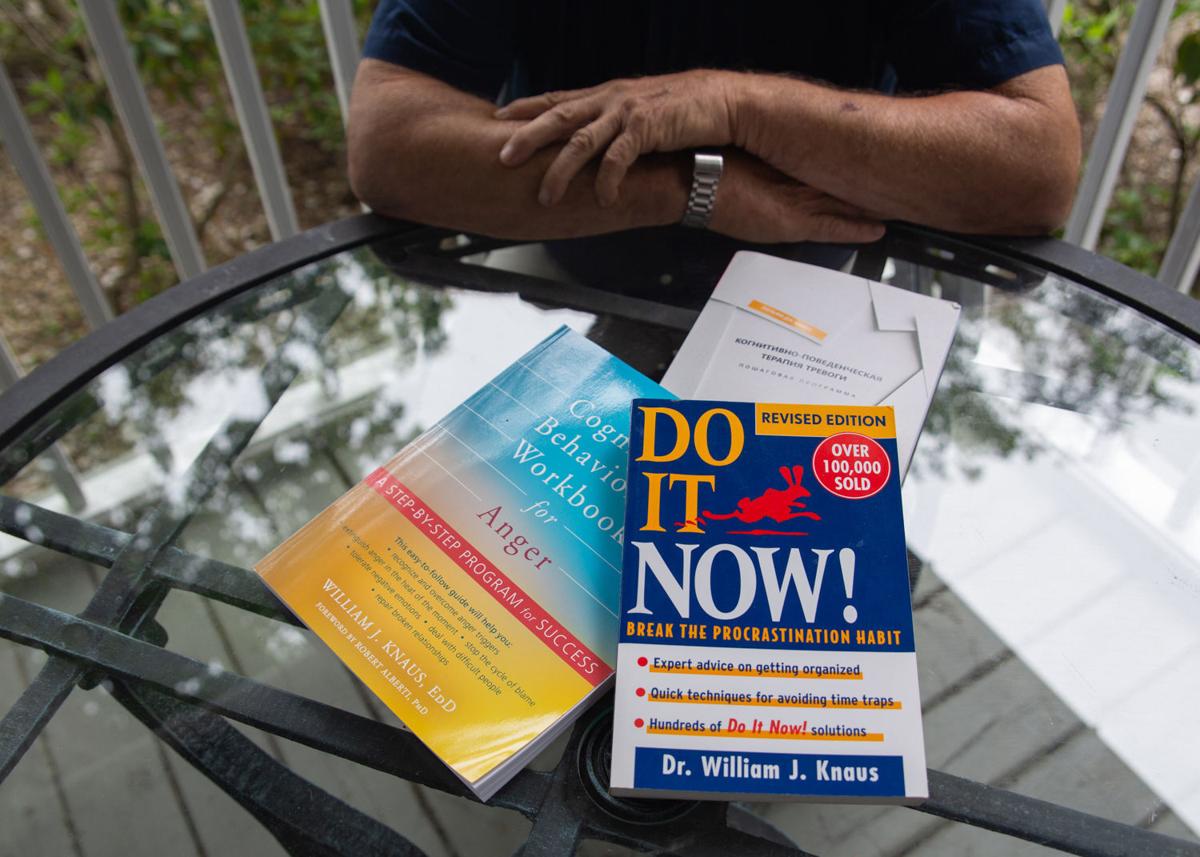 Bill Knaus has authored 25 books, including the three shown here.

Bill Knaus, shown in his backyard on Spofford Lake on Friday, has spent more than five decades as a clinical psychologist, researcher, consultant, lecturer and post-doctoral instructor.

Bill Knaus sits in his home on Spofford Lake.

Bill Knaus has authored 25 books, including the three shown here.

SPOFFORD — It’s a hot morning, already in the 80s and aiming to hit the mid-90s, but a cooling breeze wafts in from Spofford Lake, gently ruffling the leaves of the nearby birch, maple and oak trees.

Bill Knaus sits at a table on the veranda at his home, located within about 100 feet of the lake’s shore, sipping coffee and surveying the vista before him. It’s a bucolic and peaceful setting that he and his wife, Nancy, have enjoyed ever since they purchased the property as a summer home in 1991.

Incongruously, though, the subjects the 82-year-old psychologist is discussing are anything but serene. He speaks of the many years he has researched such topics as anxiety and depression, and treated scores of patients who suffered from those afflictions. And he also talks about his new research into a more sinister realm, the people psychology experts call “dark tetrads” — narcissists, psychopaths, sociopaths and sadists, many of whom are in positions of authority.

“These are people who are hiding in plain sight,” he says. “Scheming, conniving, exploitative, and they can come across as fairly smooth in the beginning.”

Knaus carries with him significant gravitas and credibility, since for more than five decades he has been a clinical psychologist, researcher, consultant, lecturer and post-doctoral instructor to hundreds of psychologists, psychiatrists and social workers. He’s also a leader in what’s called Rational Emotive Behavioral Therapy (REBT).

Knaus explains that REBT is a type of psychotherapy that helps people identify self-defeating thoughts and feelings, challenge the rationality of those feelings, and replace them with healthier, more productive beliefs. It was developed during the 1950s and 1960s by noted American psychotherapist Albert Ellis, with whom Knaus worked closely until the man’s death in 2007. In a 2001 Psychology Today article entitled “The Prince of Reason,” this was written of Ellis: “No individual — not even Freud himself — has had a greater impact on modern psychotherapy.”

Knaus has also authored 25 books, some of an academic nature but most in the self-help genre that have cumulatively sold more than 2½ million copies. He writes a blog and a column for Psychology Today, his latest installment an article called “How to Protect Yourself from Anger in An Age of Rage.”

The book he is currently writing is about how people can protect themselves, and others, from these “dark tetrads” and their manipulative and exploitative behavior.

“These people have been around for eons,” he says, and some, like Adolf Hitler, are infamous historical figures. Famous authors such as Shakespeare and Dickens have based characters on these evil and corrosive attributes. But more often, these people are commonplace managers, bosses, bureaucrats, executives and politicians.

“There may be a genetic predisposition toward this type, but their characteristics are they consider themselves the smartest people in the room and should always be praised. They’re universally manipulative and Machiavellian,” he says.

“They have a tendency to lead ‘Teflon lives,’ skilled at marginalizing others and making themselves look like the victims,” he adds. They can make the people who either associate with them or work for them feel “decimated” and miserable.

“They have a tendency to externalize blame; they exonerate themselves from responsibility and blame others.”

Although Knaus has in his long career published a prodigious amount, he says his high-school English teachers would probably have named him the student least likely to succeed. Then, he was much more interested in fixing cars, mostly for executives of the Milton Bradley Company, then a major employer in his hometown of Springfield, Mass.

The eldest of three, his father, Wilbert, an employee of the old Westinghouse plant in town, he attended Buckingham Junior High School, and was told by a school counselor that since he showed aptitude for mechanics, he would be best suited to continue his education at a local high school that specialized in the trades.

His mother, Catherine O’Connor Knaus, whom he describes as a determined Irish immigrant — and who would live to the ripe age of 102 — would have none of that, and marched down to the school to insist her son attend Classical High School in Springfield, an institution with higher academic standards. He was admitted.

“This was one of the big transitions in my life,” he says, “attending Classical.”

Upon graduation from the school, which is now closed, Knaus joined the Army and ended up serving six years in a combination of active and reserve duty.

After active duty, he enrolled in American International College in Springfield, where he earned a bachelor’s degree in psychology. Then he got a job as a collection agent for a local loan company.

“I learned that it was much easier to negotiate with those who owed money, rather than threatening them. I learned a lot about human nature in that job, and it was another turning point in my life.”

He earned a master’s degree in psychology from Springfield College and began working with children with developmental disabilities at centers in Pennsylvania and New Jersey.

Wanting to pursue a career in academics, he earned a doctorate from the University of Tennessee, with a concentration in clinical and educational psychology.

In the late 1960s, he moved to New York City, and his association with Ellis began.

“I had read his books,” he says, and enrolled in a post-doc program at the institute headed by Ellis. Knaus also began his own clinical practice in Manhattan.

He eventually became head of the Ellis Institute’s post-doc program, expanding its outreach to professionals in the field.

It was during this time, too, that Knaus began working with a New York City public school — PS 76 in the South Bronx — that was beset with high dropout rates, substandard performance by its students, fighting in the classroom and a variety of other problems.

He instituted a program at the school utilizing aspects of the REBT precepts developed by Ellis, and within three years, the school had been transformed, with significant enhancements of student performance and behavior. The news of the school’s success spread to educators, and led Knaus to write scholarly articles and a book about how it happened.

Although he could have accepted a tenured position at the City University of New York, Knaus opted to follow his own path in psychology, keeping his options open. He began writing, and his work took off in many different directions in the self-help genre, with books on such diverse topics as illusions, anxiety, depression, blame, children’s mental health and procrastination.

He wrote “The SMART Recovery Primer” to help people overcome addiction, which went through four revisions and launched the popular SMART Recovery self-help network. (SMART stands for Self-Management and Recovery Training.) Other books included “The Cognitive Behavioral Workbook for Depression,” “The Cognitive Behavioral Workbook for Anxiety” and “Fearless Job Hunting,” which describes to job hunters how to use psychological techniques to stand out from the crowd of applicants.

In addition to this, Knaus is considered a leading authority on procrastination, having written six books on the subject.

Sales of his books were buttressed by frequent appearances on morning network shows, radio interviews, and articles and citations in national newspapers and magazines.

“The books have provided a steady revenue stream,” he says when asked specifically about how lucrative his publishing career has been.

Even though writing took up time and earned him monetary success, Knaus still considered his clinical and academic work a primary focus. He maintained a close association with Ellis, and continued to direct the institute’s post-doc program. It was through that program in earlier years that he met his wife, who had earned her doctorate in psychology from the University of Virginia. The couple married in 1976 and are the parents of two sons, William Knaus II, a plastic surgeon at Emory University Hospital in Atlanta, and Robert Knaus, an engineer at Sandia National Laboratories in New Mexico, one of three National Nuclear Security Administration research and development laboratories in the United States.

A couple of years after they married, they relocated to Longmeadow, Mass., because Nancy found life in New York City not to her taste. Bill Knaus maintained his clinical practice and academic work in the city, commuting several days a week, while Nancy, now 72, worked at the Monson Developmental Center in Massachusetts (closed in 2012) and maintained a private clinical practice. They also bought a property in Punta Gorda, Fla., as well as in Spofford.

Although still working hard into his ninth decade, Knaus has some cogent reflections about his life.

“It’s the people you meet along the way. It’s the path that is untrampled. It’s what you see that others don’t — all are part of an interesting flow to life.

“It is not accomplishments that matter as much as the way you live your life on a day-to-day basis, your contributions to others, and your attitude toward life. It is better to be unrealistically optimistic than pessimistic with cause. You’ll live longer.”

At a glance: Bill Knaus