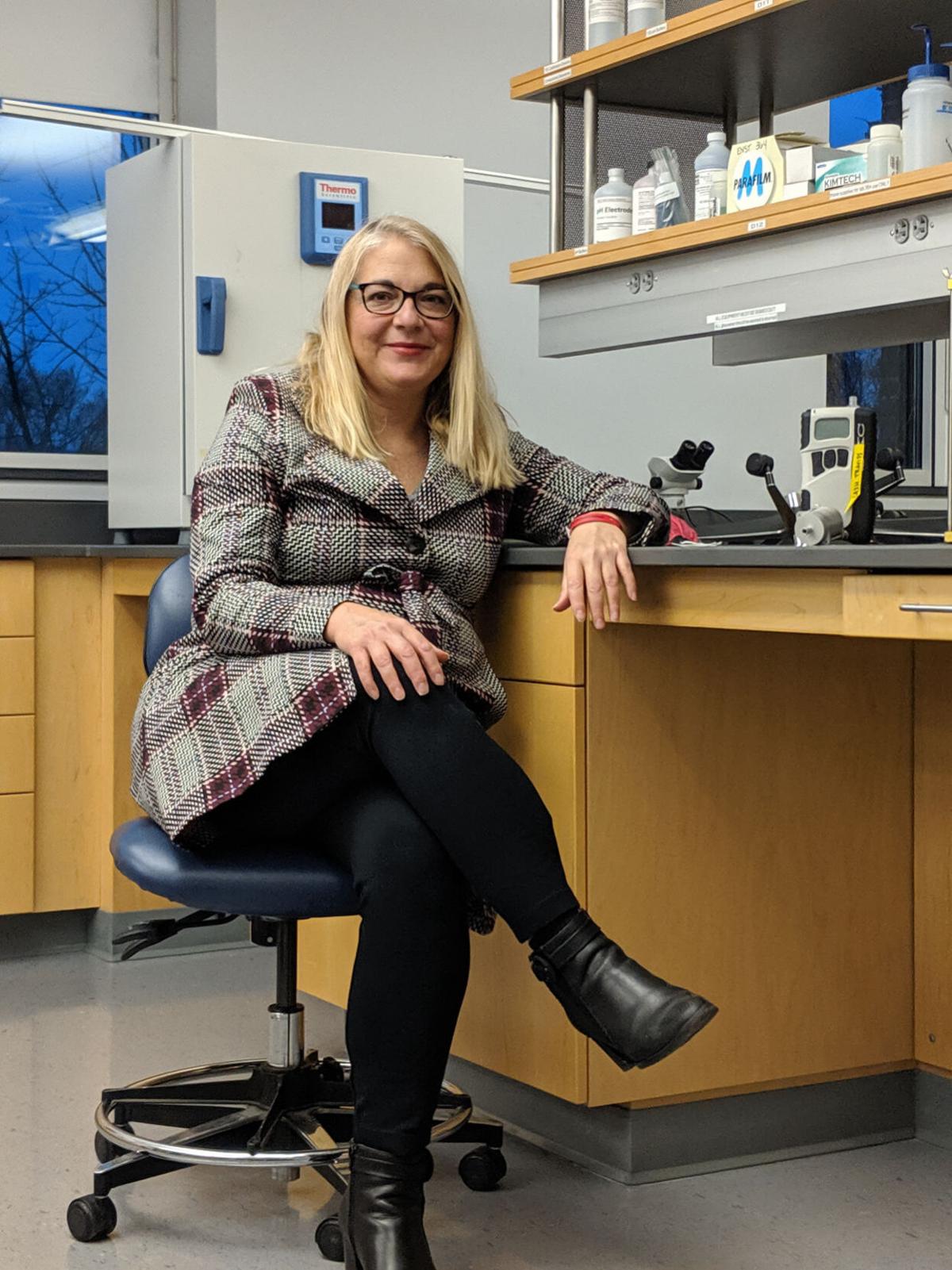 Nora Traviss, a professor of environmental studies at Keene State. She started at the college as its environmental health and safety officer in 2003. 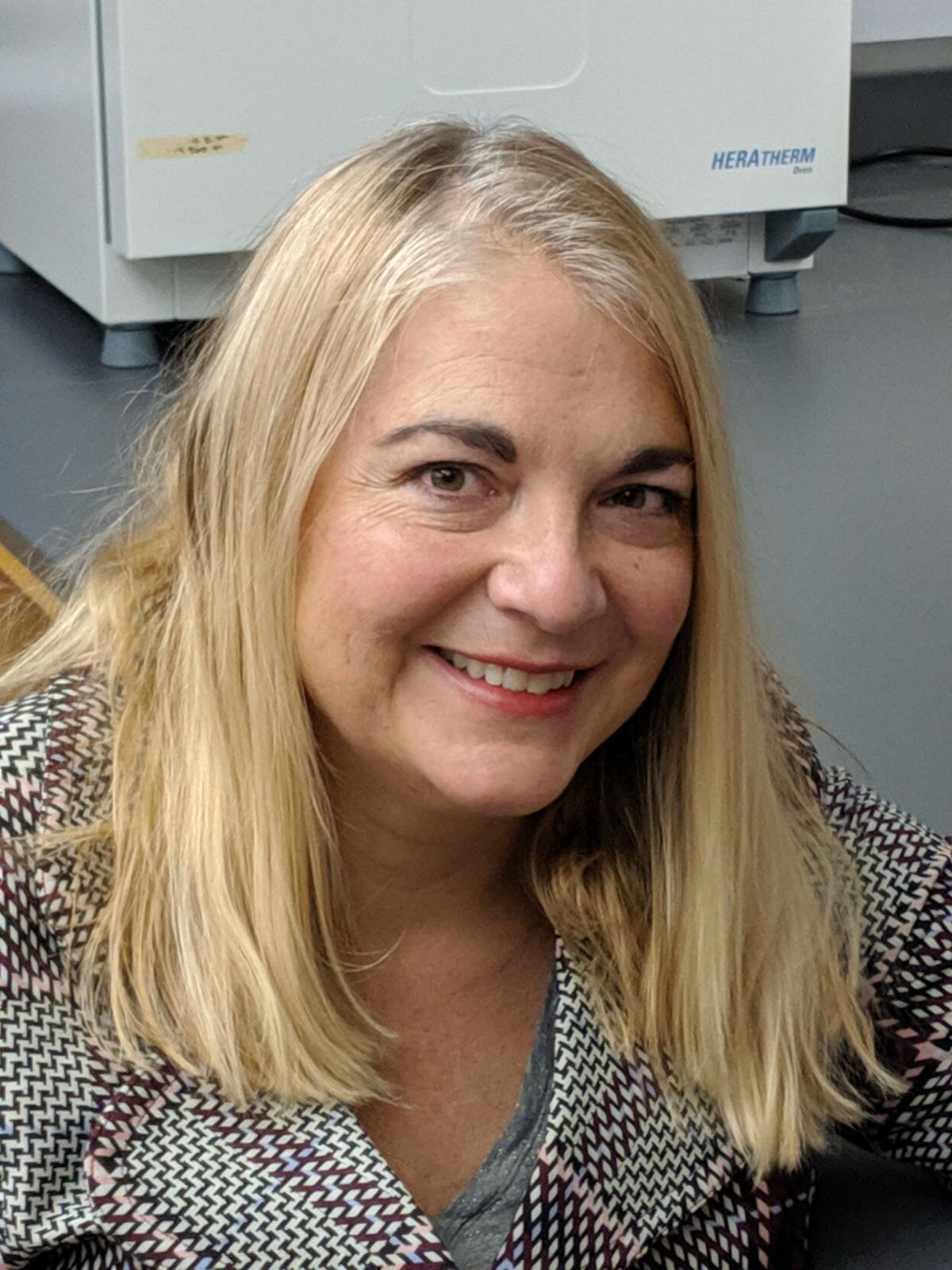 Nora Traviss, a professor of environmental studies at Keene State. She started at the college as its environmental health and safety officer in 2003.

It’s frigid and windy on this mid-December day — eye-watering cold — and a bundled up Nora Traviss quickly pushes in the security code at the entrance to the Putnam Science Center at Keene State College.

Students are on an extended holiday break, the parking lots are empty, almost all staff and faculty are working from home, and access to Keene State’s buildings is strictly controlled because of COVID-19.

Before Traviss, a professor of environmental studies, enters the structure, she carefully places a cloth mask over her paper surgical mask, giving her what she says is protection equivalent to that of a more sophisticated N-95 respirator.

She certainly would know how to protect herself, as she’s an expert on the health effects of environmental pollutants and how they are dispersed in the air. One of her more notable research projects is the long-term monitoring and analysis of air quality in Keene, which is prone to atmospheric inversions that cause heavy concentrations of particulates from the use of wood and pellet stoves. This can lead to health problems, especially for those with respiratory troubles.

Much of what Traviss has studied can be applied, too, to COVID-19 — what scientists call an infectious aerosol — and how it circulates and spreads both inside and outside.

She is also a member of the New Hampshire Science and Public Health Task Force, an independent advocacy group of 25 physicians and scientists dedicated to the dissemination of accurate information about COVID-19 and other public health issues.

“I just got finished giving a presentation on Zoom to a group of restaurant owners about proper ventilation and airflow,” the 52-year-old Keene resident says as she walks up the three flights of stairs to her office and laboratory. The virtual meeting had been organized by Keene restaurant owner Luca Paris, and included Keene Mayor George Hansel.

Traviss is, of course, a strong proponent of people wearing masks and keeping a respectable distance from one another during this time of the virus. However, she shies away from the raucous debates caused by what she terms the “politicization” of the pandemic, and the onslaught of misleading and sometimes outright erroneous information supplied to the public. Masks, while never 100 percent effective, she says, go a long way to preventing the virus’ spread.

Another aspect of the crisis that concerns Traviss is COVID’s disruptive effects on the students, forcing them to cope with limited classroom time, periodic shutdowns, isolation and the lack of a social life.

“This has been the most difficult semester,” she says. “Nothing is normal. The kids are kind of lost at sea, and we’re doing our best to keep them afloat. But they are struggling.”

Facing academic challenges is something Traviss can understand, reflecting upon her own life, which began in New York City.

“I was a very studious young girl. I lost myself in books, and science and math were my favorite subjects.”

She easily aced all of her coursework in high school, and after early graduation applied to Penn State, where she enrolled in its chemical engineering program at age 17.

“I was quickly overwhelmed by the size and complexity of the institution, and I became a C student. I had to drop a few courses my freshman and sophomore years, and I had to work hard.

“A professor took me aside and recognized that I was struggling. He said that I was most likely a visual learner, and perhaps the university’s newly instituted ‘Co-op’ program would be more appropriate,” she says.

Co-op education, pioneered at Northeastern University in Boston, features five-year undergraduate programs that offer students hands-on experience working full-time for pay in a company associated with their field of study, usually for a period of two years.

In Traviss’ case, she was hired as an assistant plant engineer at a manufacturer of generic drugs in a small town in South Central Pennsylvania.

“I was responsible for mopping out the week’s production,” she says. “It made me learn about pipes, valves, pumps and compressed air distribution.”

The job also introduced her to a world much different than what she was accustomed to in New York City.

“I was so naïve. I was only 20, and I arrived there in my old brown 1973 Chevy Nova with no heat. This was Appalachia. I had to learn a lot about life, and a different culture. But I found out the people were so lovely,” she says, her older coworkers taking her under their wings. Her second job as part of the co-op program was at a chemical plant in Mississippi, another opportunity to adapt to a different culture.

“Those jobs helped pay for my college tuition, and after that experience, I started earning As and Bs; the lessons stayed with me,” she says.

After graduation in 1990, as one of only 12 women of the 115 chemical engineering graduates at the university that year, she got a job as a plant engineer in Baltimore with Praxair Inc., a major producer of industrial gases. Eventually, she was promoted and moved to Connecticut to become the engineering supervisor for three of the company’s facilities.

After that, she began working at Matheson Gas Products in New Jersey, serving as compliance manager at 13 of its facilities that manufactured a variety of highly toxic gases.

“It was a trial by fire. It was a lot of work; I was dealing with serious accidents and cleanup programs. I was traveling all the time.”

Next, she began working with Novartis, a global producer of medical products. While with this company, she earned her master’s degree in environmental science at the New Jersey Institute of Technology, graduating in 2000.

“I struggled so much as an undergraduate; I never met my academic potential,” she says, “but at NJIT, I had a perfect 4.0.”

Her husband at the time had a new job opportunity in New England, so they moved to Chesterfield in 2001. She was expecting a baby.

In 2003, Traviss was hired by Keene State College as its environmental health and safety officer. While in that job, an opportunity arose for her to teach environmental law and regulation as an adjunct faculty member in the Safety and Occupational Health Applied Sciences Department.

“Guess what? I found out I loved teaching!”

Traviss earned her doctorate degree in environmental studies at Antioch University New England in 2008 and was hired as an associate professor in Keene State’s Department of Environmental Studies in 2013. She was promoted to full professor in 2018.

“I found my perfect job,” she says. “I could relate to the students because like many of them, I was a first-generation college student myself, and I worked my way through school.”

She also said her years in industry enhances her teaching ability by being able to explain to students how what they learn in the classroom applies in the workplace.

“That experience has made me a better teacher, more well-rounded.”

And she believes that public advocacy is an important role for a scientist.

“I think it’s important to make science understandable and democratic,” she says.

At a glance: Nora Traviss