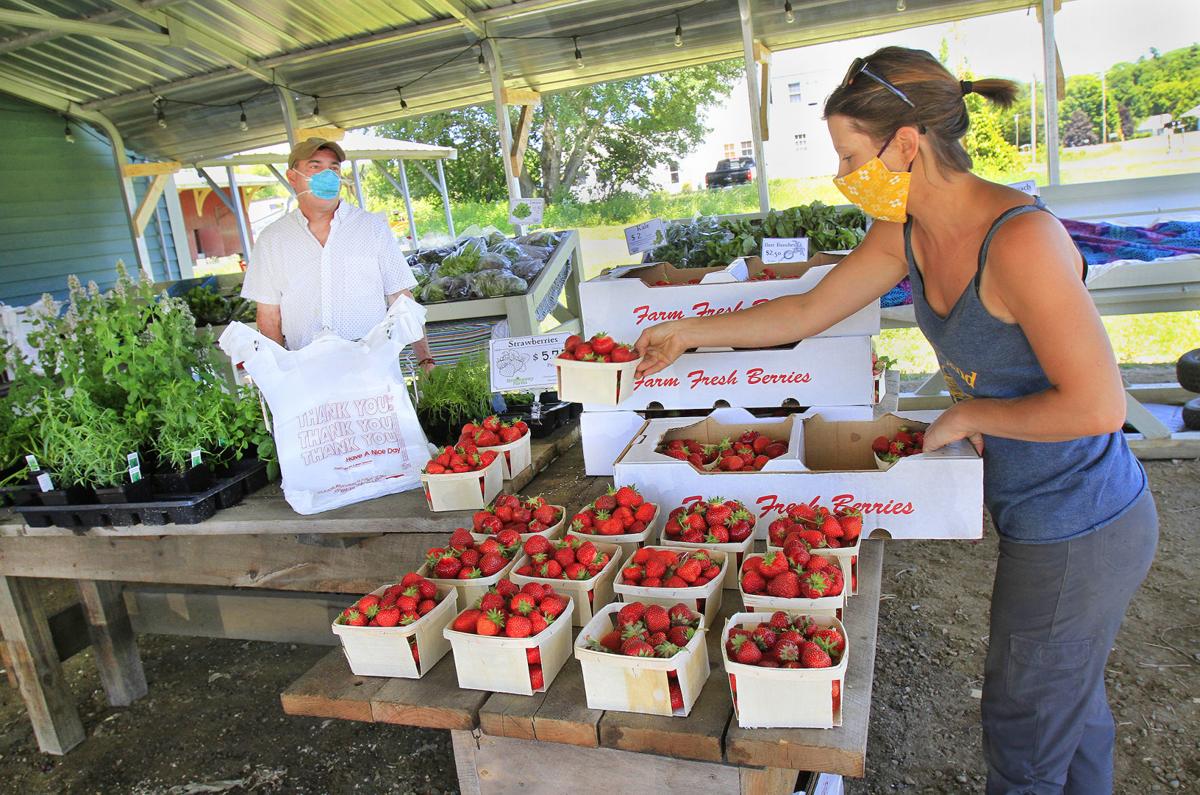 Teresa Janiszyn of Pete’s Stand in Walpole puts strawberries out while chatting with customer Dane Badders, of Walpole, on Wednesday. 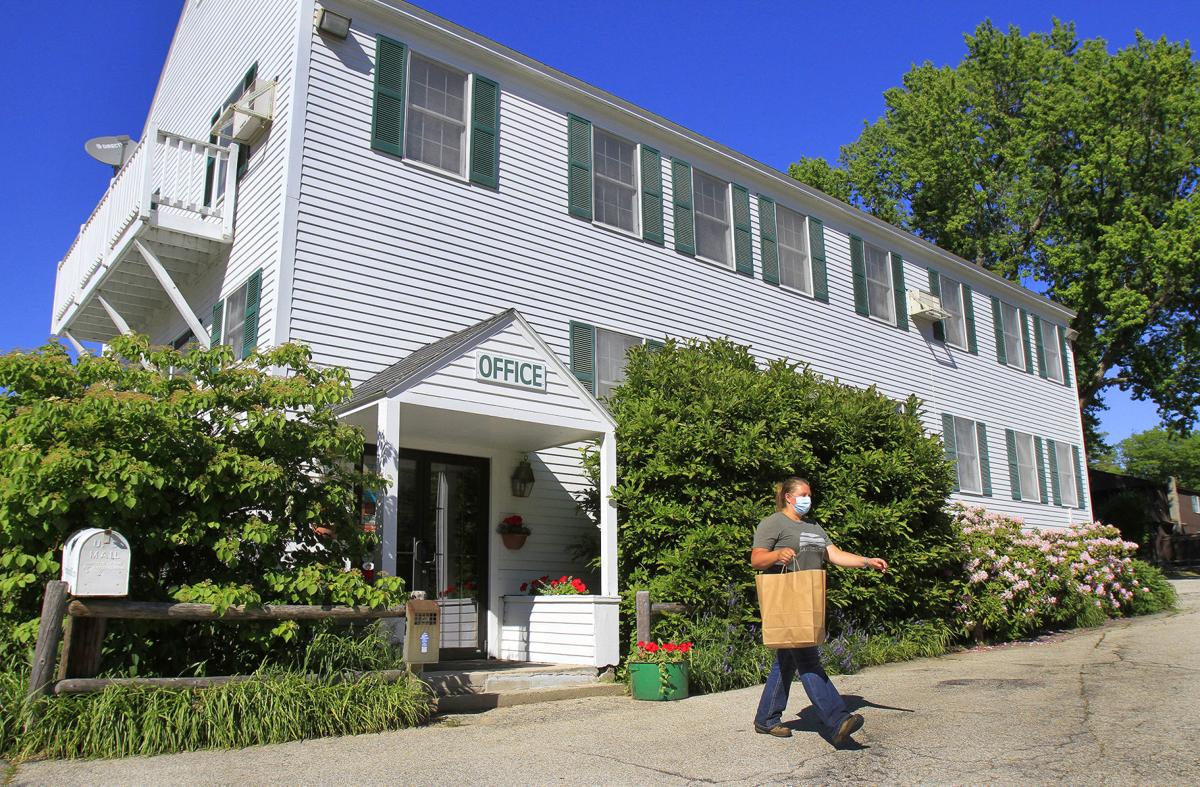 Teresa Janiszyn of Pete’s Stand in Walpole puts strawberries out while chatting with customer Dane Badders, of Walpole, on Wednesday.

When you’re in farming, being resourceful comes with the territory. And for many in this line of work, COVID-19 has put that resourcefulness to the test.

But as area operations adapt to new public-health and economic realities, they’re finding the appetite for locally produced food during a pandemic is strong.

From carry-out meals and homemade dishes to community-supported agriculture shares, Monadnock Region farms are trying to keep up with a demand many say took them by surprise.

“Farm store sales increased dramatically earning half of our typical annual revenue in a month,” Julie Davenson, executive director of Stonewall Farm in Keene, wrote in an email Monday. “It was the silver lining of this pandemic, exposing the vulnerabilities in our broken national food system.”

A N.H. Business Review article from April examined how the outbreak’s impact on national and international food supply chains, among other disruptions it has caused, resulted in more people seeking out locally produced foods, whether from the farm or the sea.

In Troy, The Inn at East Hill Farm offered “take-away” food for the past few months to help fill the void of having to close to overnight guests in mid-March. Providing lodging, activities and meals to guests is a huge part of the business.

Jennifer Adams, an owner of the farm, said the response to the to-go meals and baked goods was strong, not only from Troy residents but also from people living in the neighboring communities of Fitzwilliam, Rindge, Peterborough and Keene.

The family-style dinners were made to serve two, four or six people, she said, and the farm averaged 35 to 40 meal orders each time.

With the inn planning to reopen to overnight guests Friday, the farm wrapped up take-away service this past week, according to Adams. However, she said, they plan to offer “pop-up” meals in the future, possibly in the fall.

While the initiative was something to keep staff busy, Adams described it as more of an effort to do something good for the community, and share the foods they have on their menu.

“We thought it would be a nice way to keep in touch locally because most of our business doesn’t come locally, but comes from out of state,” she explained. “We also thought it was a nice way for people to know we have delicious foods and things to offer that would give them other options, as Troy doesn’t have a lot of takeout.”

Like The Inn at East Hill Farm, Stonewall Farm in Keene has been offering meals to go.

Since the pandemic started, Davenson said, the farm store has expanded its local food offerings and hours, including adding products from other farms such as Mayfair Farm in Harrisville, Old Bridge Farm in Swanzey and Hungry Bear Farm in Wilton.

In addition, the farm store now has take-home meals and prepared foods for purchase from restaurants including Machina Arts in Keene, The Restaurant at Burdicks in Walpole, Shree’s Kitchen in Keene and Dosa Kitchen in Brattleboro.

The farm has also added an online farm store and curbside pickup, ready within the hour of the order being placed, she said.

In an effort to meet demand, Stonewall Farm has been able to increase the amount of crops it grows, as the pandemic came at the beginning of the growing season, according to Davenson. However, scaling up dairy or livestock production instantly isn’t easy, she added.

“I hope people realize if they want local food security they need to support local farms year round, not just when there is a pandemic,” she said in her email.

But a rise in revenue from its retail sales doesn’t mean the farm is going to have a good year financially.

The pandemic has had a significant impact on the farm’s events, which are its major revenue source, Davenson explained, and the farm has been operating with a significantly smaller staff.

“While farm sales have increased, the margin isn’t high enough to cover the full operating expenses for the non-profit organization. Dairy has been especially hard hit,” she said.

At Echo Farm Puddings in Hinsdale, pandemic-related challenges in distributing its products to grocery stores made for a tough March, co-owner Beth Hodge said. The business was able to pivot a bit and put more emphasis on offering its puddings at 10 or so farm stands it was already working with, she said. While some of those stands are local, the vast majority are in other parts of the state and Massachusetts, she said.

Sales increased, and as Hodge and the farm staff worked to meet demand, they decided to have some fun — they developed a line of pandemic puddings. Those puddings, which are flavors Echo Pudding used to make before retiring them, are being offered exclusively at the farm stands.

Twenty-five percent of the proceeds from the sales of the puddings will be donated to the N.H. Food Bank, according to Hodge.

“It’s something different for us to do. It not only moves product, but we’re doing something to give back and helping the farm stands purchasing from us,” she said.

Of the returning flavors — coconut, peanut butter fudge and lemon — lemon proved the most challenging to re-establish.

“The lemon was something we did 25 years ago when we first started, and we weren’t able to get some of the ingredients we used to use. We pretty much had to start from scratch with it,” she said.

Finances for April and May ended up being better than they could have been during the pandemic, and the business received a federal payroll protection program loan, as well as some funding from the U.S. Department of Agriculture to help with the dairy farm side of the business, Hodge said. The majority of the milk produced on the farm is sold into the commercial market, and about 20 percent is used to make pudding, she said.

“Going forward we have been sort of learning the lessons of this. For one thing, we can’t rely anymore on a short-term turnaround for ingredients we’re ordering.”

The farm has also been selling more larger containers of pudding than it did before the pandemic.

“More people are home, and there is just not the need for the same level of convenience,” she explained. “Pudding is a comfort food, and initially people wanted those things that made them feel good, and that definitely has had a impact.”

Jenny Wooster, who owns Picadilly Farm in Winchester with her husband, Bruce, said their community-supported agriculture business sold out of shares for the season six weeks earlier than it usually does, and that was even after they had increased the available shares by about 10 percent. That amounted to about 475 shares locally and approximately another 260 shares to people living in the Boston area, she said by phone Monday.

“There has definitely been a higher demand this year,” she said. “We’re usually selling shares right up until we open. We sold out in early May and have been working from a wait list.”

However, the loss of business from area restaurants and food co-operatives, along with an increase in expenses to meet federal and state pandemic guidelines, has Wooster concerned the farm may not be as profitable as it would be in a normal year.

“We’ll see what happens. I’ve planted some extra carrots and parsnips that we could sell on the back end of the year for a little more income to cover some of those extra expenses.”

Pete’s Stand, a mainstay farm stand on Route 12 in Walpole, opened for the season on June 11, and like the Woosters, its owners are concerned about expenses associated with pandemic life. But they, too, say they have seen an increase in customer support.

In order to have revenue available to start the season, the farm has a pre-buy program. Customers can purchase gift certificates ahead of time and get bonus cash to use when they buy from the stand later in the year, Teresa Janiszyn, who owns the business with her husband, Pete, said by phone Monday.

Usually they make about $5,000 to $6,000 through those sales, but this year they made almost double that, she said.

“I feel really fortunate that early on in the season things didn’t feel very different for us. We were working mainly in a family unit, and we were still able to work comfortably,” she said. “Now that the stand is open, we’re pre-packing a lot of things, and we’re sanitizing and washing more than we ever did before.”

The farm sells its own vegetables at the stand and fruit it buys from local farms. It’s also adding refrigerator and freezer space, she said, as they plan to sell locally produced milk, cheese and meats.

The stand was renovated this year, but it may need an addition to keep up with customer demand while still accommodating the social distancing requirement of six feet between people, according to Janiszyn.

“We’re learning. This is all new,” she said. “I think the key is to maintain business and just be as flexible as possible. That’s all we can do.”