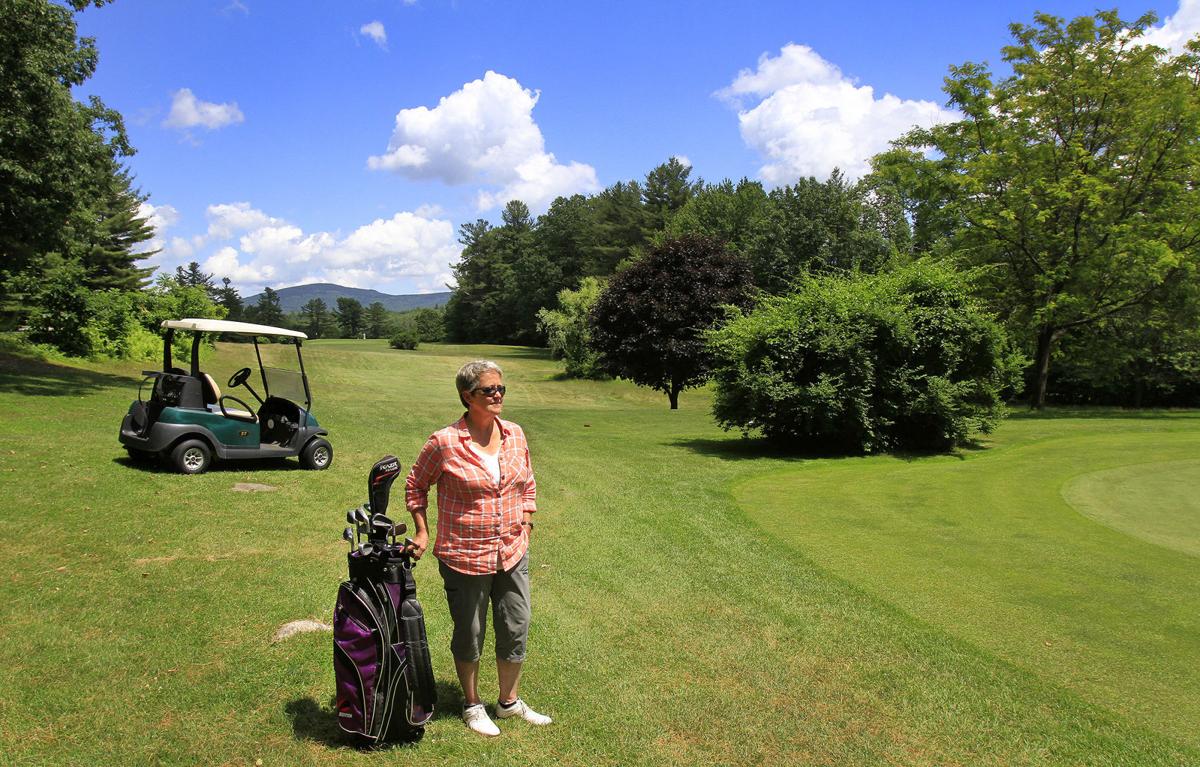 Annie Card likes to call the nine-hole Hilltop Golf Course in Peterborough, where she was photographed Wednesday, “a perfect golf course for busy people.” 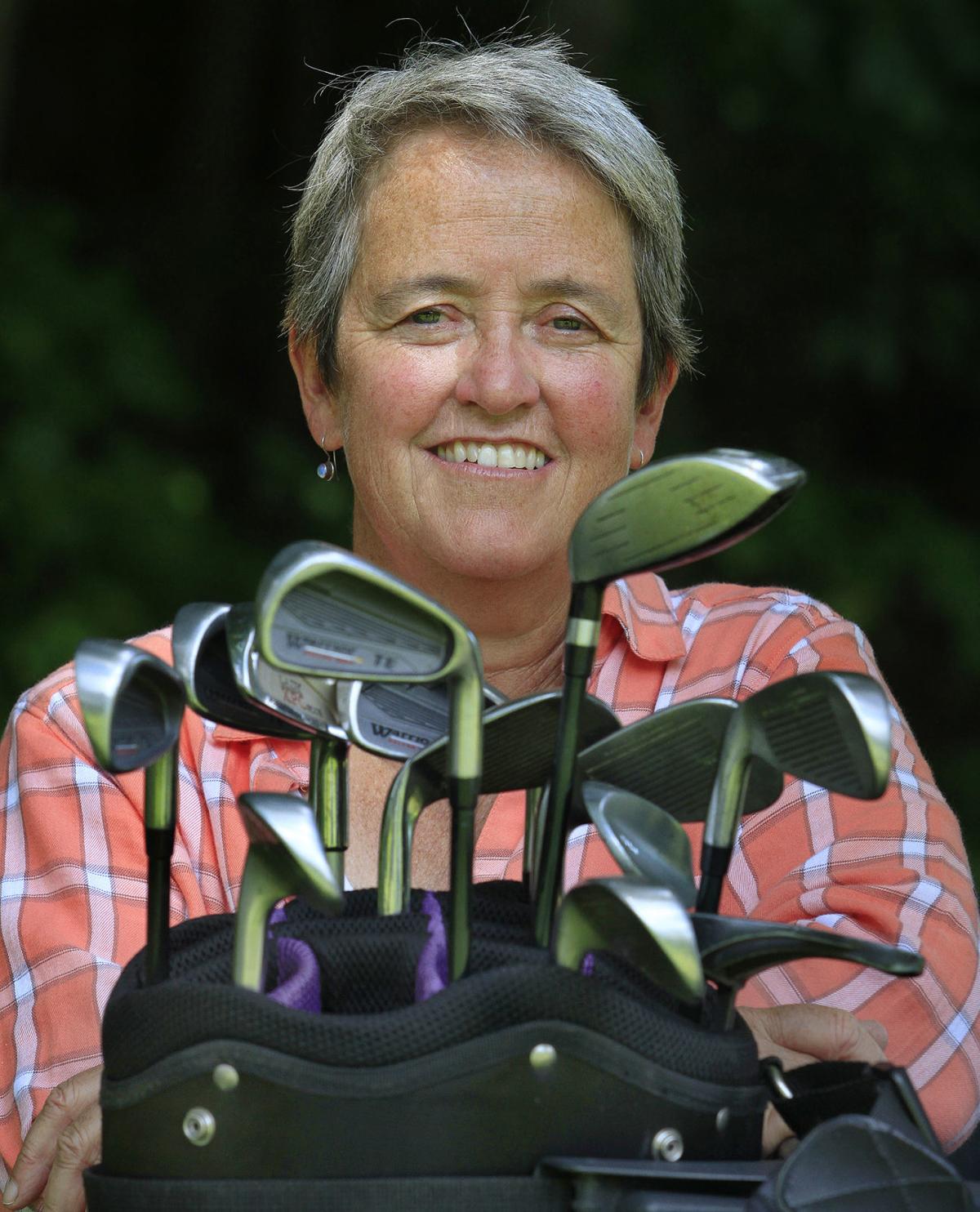 Annie Card likes to call the nine-hole Hilltop Golf Course in Peterborough, where she was photographed Wednesday, “a perfect golf course for busy people.”

PETERBOROUGH — It’s raining hard, the kind of summer downpour that forces everyone to run indoors with their arms over their heads in a futile effort to protect themselves from a soaking.

The rain doesn’t let up, but it provides Annie Card a respite from her outdoor work as owner of the Hilltop Golf Course. The property abuts The MacDowell Colony, the world-famous artists retreat founded in 1907 by composer Edward MacDowell and his wife, pianist and philanthropist Marian MacDowell, who are buried just off the course’s second fairway.

“The rain’s good for the course, for the greens,” says Card, 57, as she sits in the cozy clubhouse. Built in 1932 during the depths of the Great Depression, the clubhouse reflects the style of that time, with dark wood paneling that originated from pines and hardwoods felled in the forests nearby. Old photographs and framed, faded newspaper clippings on the walls depict golfers from earlier eras, their clothing offering a clue to their vintage. One particularly special photo is prominently displayed; it’s of the “Sultan of Swat” Babe Ruth teeing off, although it’s uncertain if its provenance is on the Peterborough course.

Up until 2017, the place was known as the Monadnock Country Club.

Short in stature and exuding energy and warmth, Card explains how she ended up running the golf course.

“I’ve said yes to a lot of things in my life,” she says. “The place was in trouble, bankrupt. They closed in October 2016, at the end of the season.”

But Card’s friend and fellow tennis player, Vickie Brock, managed to rally some Peterborough residents to buy memberships, and the club was kept open by the skin of its teeth for another season in 2017 and renamed Hilltop Golf Course.

“Vickie learned that if the course was let go, it likely would never be recovered,” Card says, the fairways and greens reclaimed by the inexorable forces of nature.

MacDowell’s resident director, David Macy, had been searching for an individual or group to take up management of the golf course, according to a March 2017 article in the Monadnock Ledger-Transcript.

“I jumped in to help,” Card says, putting together a business plan that she presented to the board of MacDowell, which owns the land and buildings.

“I was nervous when I presented my plans to them,” she explains, “and they said yes.”

Card bought the defunct business last year and leases the land and buildings from MacDowell.

The course has a long history, originally opening in 1901. Edward MacDowell was instrumental in its founding and later wrote a section into its bylaws allowing artists-in-residence to play for free, though that’s cashed in on “maybe once or twice a year,” Macy said in the 2017 Monadnock Ledger-Transcript report.

Coincidentally, Card says, “Yesterday, a half-dozen colony residents wandered over here. They had never played golf, so I gave them a bucket of balls and some clubs. They had a great time.”

Card’s plan concentrated on two goals — to make the course more profitable and to promote its sizable function hall as a year-round venue for weddings, retirement parties, anniversaries, company banquets and other special occasions. It has already hosted a number of such events.

“I like to fix broken things,” she explains. “I can see clearly when there’s something I can help.”

Card understood that taking on the responsibilities of resurrecting the business would require quite a bit of work. “I’m up mowing at 5 a.m., and last night, I shut off the sprinklers at 9:30. I have high expectations for this place.”

In golf parlance, Hilltop is what’s known as a “short course” of nine holes. “I like to say we’re a perfect golf course for busy people.”

‘I left without a plan’

Born and raised in West Haven, Conn., Card is the seventh of 10 children of the late Harold and Lorraine Card. He was a firefighter, and she a nurse and homemaker. Card describes the home where she grew up as happy and full of activity — easy to picture with that many siblings. “There were bunk beds everywhere,” she says, smiling. “We’re still a close family.”

Card graduated with a bachelor’s degree in journalism and photography from Boston University and moved to New Hampshire after graduation.

Her connection to the Granite State started during her junior and senior years at BU, through an internship at Yankee Publishing of Dublin.

She was hired by Yankee full-time after graduation and ended up working there for 16 years until 2000, serving as its photo editor for 11.

“They were the most generous and kind mentors, editors and art directors,” she says of the company, mentioning such names as former editor Judson Hale and current editor Mel Allen. “How patient they were with me when I was learning and making mistakes.”

Eventually, Card left the job because she felt it time for a new challenge. “I recall the day before I left Yankee, Jud Hale asked me what were my plans. I said it depends on the weather. He said to me, ‘That is so you.’ I left without a plan. I left Yankee, but the door never closed behind me,” she says, and she still occasionally does projects for the company.

For the next couple of years, Card went on her own form of walkabout, including doing freelance photography, travel writing, a stint with Outward Bound and paddling 300 miles up Canada’s Coppermine River into the Arctic Ocean. She also became a ski instructor at Mount Sunapee and a wildfire fighter in Wyoming and Montana.

Then came Hurricane Katrina in 2005, and Card embarked on an experience that would become perhaps the high point of her life to date.

The ‘most important work’

Immediately after the hurricane hit, Card joined the Red Cross effort to help victims in Mississippi.

“New Orleans got all the media attention, but the storm hit Mississippi first, then New Orleans,” she says. “It obliterated the place.”

She worked with the Red Cross for a month and ended up moving down there, to a town named Pass Christian — nicknamed “The Pass” — near Gulfport and Biloxi.

After the Red Cross emergency help began to withdraw, Card and another woman aiding in the effort, Tammy Agard of Montana, began their own recovery initiative — a nonprofit organization named “Mississippi Home Again.”

“I asked myself how else could I help after the Red Cross,” she says. “I went to my friends in Peterborough.”

There, with the help of then-U.S. Rep. Charlie Bass and the local chapter of The Salvation Army, $30,000 was raised, and the new organization formed.

From that start, Card and Agard built a formidable recovery effort, eventually raising more than $3 million in cash and in-kind donations to help those devastated by the hurricane.

“People don’t understand unless they’ve been in a disaster zone, that it lasts for years. What people see in the news is for a week or two, but there is so much more death and suffering involved for a long, long time. Suicides, depression, financial devastation.”

Americans are very generous with money during a national disaster’s immediate aftermath, Card explains, but what victims need in real time are things like shoes, electricity, refrigeration, beds, food and water.

“Katrina was so broad and deep of a disaster that it was the first time international aid agencies came to our rescue,” she says.

In this type of disaster, “People are not better in six months or a year, or two years; they need help for a long time.”

Because of her experience in journalism, Card was able to generate national publicity for her effort, with coverage ensuing by such outlets as The New York Times and the network morning shows. As a result, money came in, but more importantly, companies donated what “Mississippi Home Again” needed most — refrigerators, stoves, washers and dryers, hot-water heaters, paint, building supplies and furniture.

“What people and media liked about us was the grassroots nature of our organization; we had thousands of volunteers,” she says.

Living out of a small trailer, during the day Card worked steadily on the rebuilding efforts, and stayed up late at night writing press releases that she sent to the volunteers’ hometown newspapers. More money and goods poured in, and eventually, the initiative grew to a 100-bed shelter and two large warehouses in Pass Christian.

“It was the best work and most important work I ever did,” she says of the experience. “What could even matter after that? It was hard to come back because as much as we helped, we left so many in need.”

‘I want to get things done’

She is, in essence, a problem solver.

Mel Allen, Yankee Magazine’s editor, recalls when Card showed up at the magazine as an intern.

“She so impressed us with her work ethic,” he says. “She became an indispensable member of the staff.”

Allen describes her as “having an enormously generous heart” with an ability to get things done. “She had to move mountains to get that aid to Mississippi. She is the kind of person that every community wants to have. She knows what her goals are.”

Card credits much of her success to a special chemistry in her makeup.

“I don’t have a very big ego, but I’m impatient; I want to get things done. I know I’m not the best at things, but I’m the best I can be. I’m not afraid to do new things and to ask for help.”

At a glance: Annie Card