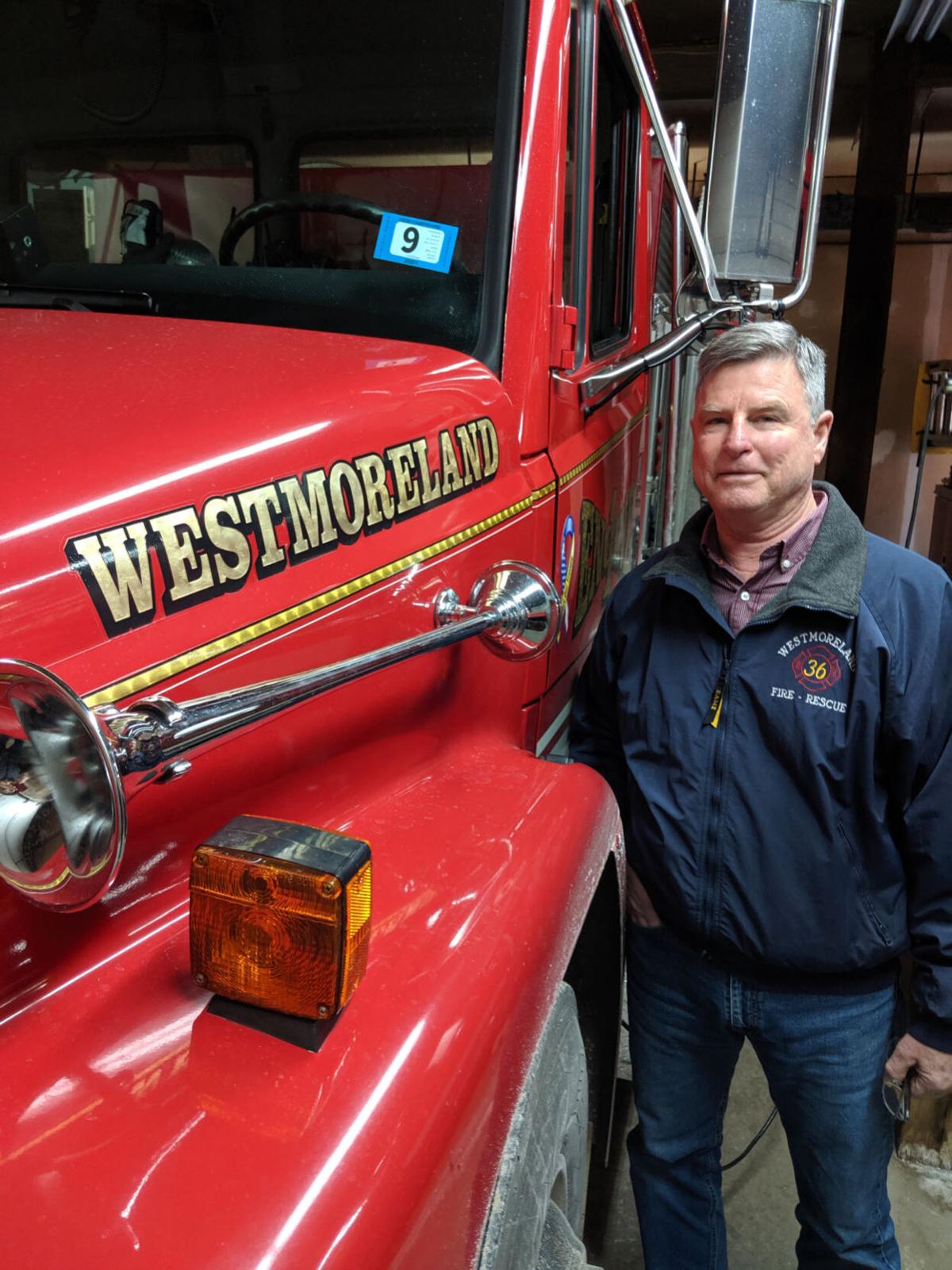 Formerly also serving as an EMT, Tom Finnegan is a volunteer firefighter for Westmoreland and is also the town’s volunteer director of emergency management. 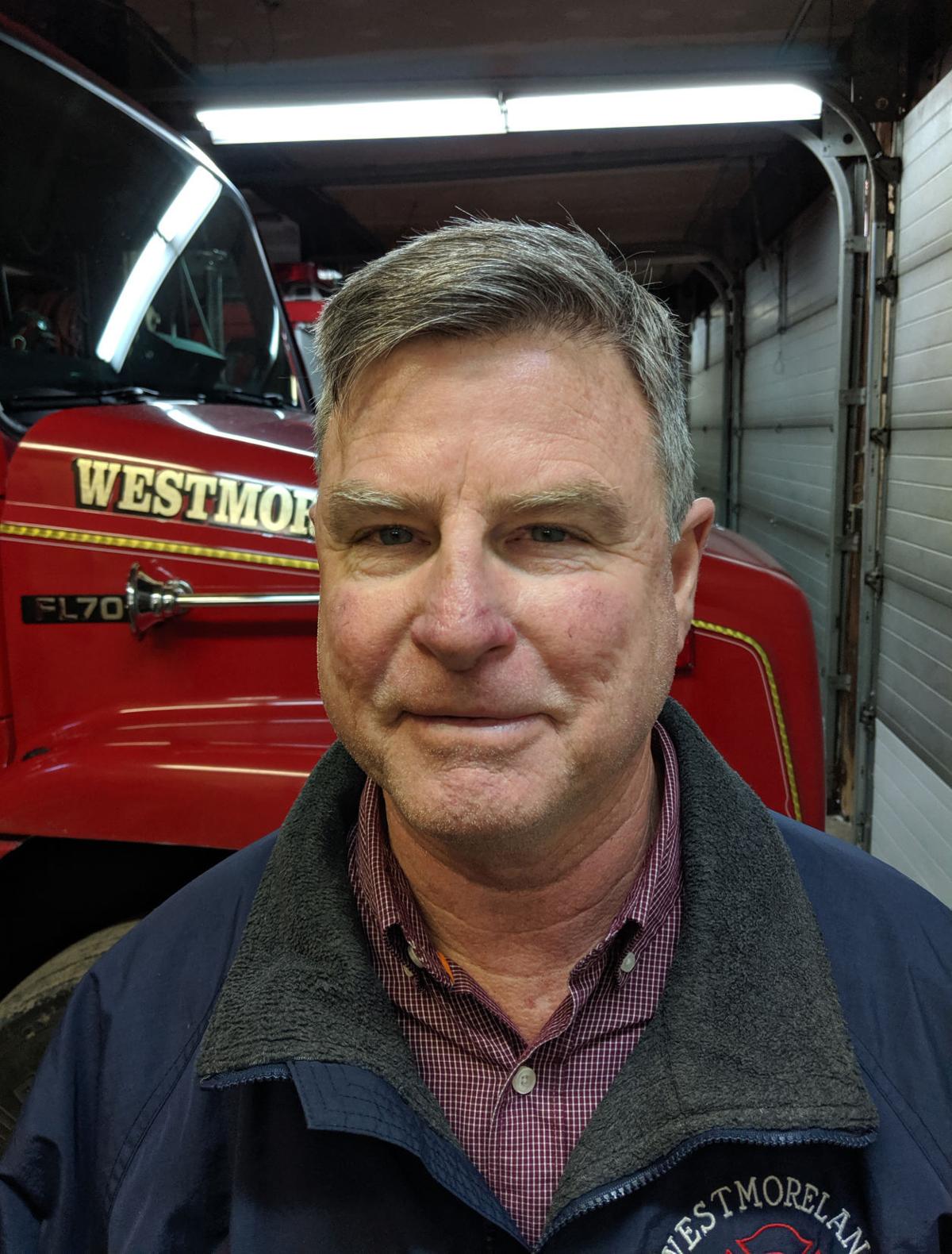 Formerly also serving as an EMT, Tom Finnegan is a volunteer firefighter for Westmoreland and is also the town’s volunteer director of emergency management.

WESTMORELAND — Tom Finnegan looks pretty fresh on this morning, sitting in his living room, coffee in hand, relaxing in an easy chair. You wouldn’t suspect he’d been up almost all night on emergency calls with the Westmoreland Fire Department due to a severe windstorm that brought down powerlines the night before.

Finnegan, 63, recently retired as a letter carrier with the Keene Post Office. But around Westmoreland, he’s better known as the volunteer firefighter and former EMT who has helped hundreds of people who have found themselves in dire straits. He is also the town’s volunteer director of emergency management.

In addition, Finnegan headed up the Westmoreland Fire Department Advisory Committee, campaigning for the construction of a new $2.2 million fire station. The proposal failed this week by just three votes.

“I’ve always wanted to give back to the community,” he says. “Where I grew up, the New Jersey Turnpike was in our backyard, and I saw accidents and watched the ambulance crews helping people. I thought I’d like to do that someday.”

Finnegan’s story begins in the Garden State, where he was born and raised, the fifth of nine children, with four brothers and four sisters. His late father, Richard, worked for Bell Telephone in New York City, commuting from their home in Milltown, N.J., while his mother, Betty, who at 95 still lives in that state, carefully tended to the children.

It was a lively household, Finnegan says, with much give and take among the siblings.

“I was the ‘swing child’ between the older and the younger ones. There were girls all around me, so I didn’t stick around the house too much,” he quips.

And with that many mouths to feed, he notes, his mother visited the grocery store nearly every day.

After graduating from North Brunswick Township High School in 1976, Finnegan enlisted in the U.S. Army, informing his parents only the day after he’d signed up. When he went to boot camp at Fort Sill in Oklahoma, it was the first time he’d ever traveled on a plane — or visited a region outside the Northeast.

His first assignment was a two-year stint near Nuremberg, Germany, with the First Armored Division, then another two years with the 101st Airborne Division at Fort Campbell, Ky., which included jungle survival training in Panama.

“You grow up in the service,” he says. “You learn to take care of your own affairs. And I learned from the Army that I liked to travel. You get a different perspective of what things are all about; you experience the world.”

During a brief leave back home, he met his future wife, Susan, through one of his sisters. Soon after, he asked her to accompany him to a family wedding, and a romance blossomed. They were married in 1981 in Highland Park, N.J., and had one daughter. Now grown, Alyson lives in San Jose, Calif.

After serving in the Army, Finnegan went to work with Susan’s father, Kenneth Hopkinson, who owned a heating and air-conditioning company in New Jersey. After two years there, he moved on to manage a small liquor store in Kendall Park, N.J., for 13 years but left that job when the New Jersey liquor laws changed, driving out small operators. He then started his own business, a mobile auto body firm that serviced automobile dealerships, fixing minor problems in new cars that were damaged during shipment.

“I enjoyed working for myself,” he says, “but we needed good health insurance, and one day we opened the mail, and they’d doubled our premiums just like that. We just couldn’t do it.”

The next day, fortuitously, Finnegan received a letter asking him if he would interview for a job with the U.S Postal Service, where he had applied a few weeks before at the suggestion of a friend who worked there.

“The job had full benefits; I called them up and said I’d be there pronto to interview.” He got the job and started as a letter carrier in East Brunswick, N.J., in 1995 and at the same time began training to become an EMT with the Milltown Fire Department.

It was during this time, too, that the couple began to consider moving to a more rural setting.

“New Jersey has the three ‘too’s’ — too crowded, too busy and too expensive,” he says.

Because the USPS required that all new hires serve in their initial assignment for at least 18 months, he and Susan used that time to explore places where they might relocate.

“We had criteria — six hours’ driving time to our hometown, not near a large city, not a suburb, and it should be a college town.”

After about a dozen forays in all directions, he found himself in Keene.

“I remember he called me and said he’d found the place to settle,” Susan says.

Finnegan applied for a job at the Keene Post Office and learned an opening would be announced the following day. “At 4 a.m. the next day, we got in the car, arrived in Keene, I interviewed for the job and that afternoon was hired,” he says.

“When we drove into Keene, there was a rainbow around the sun, and I knew it was a sign that this was the right place,” Susan says.

Finnegan was assigned a route in the north end of the city, in neighborhoods abutting Washington Street.

“I knew nothing about the town, but I quickly learned the neighborhoods,” he says. “There were two things I really loved about the post office — being outside and meeting all the people on the route.”

A letter carrier eventually gets to know a neighborhood very well, he explains, frequently conversing with residents and keeping an observant eye open. “You get to know what’s normal and not normal,” he says, noting such things as residents who should be home but aren’t, or suspicious activity. “We fill out ‘alert cards’ if necessary and bring them back to the office to be followed up. We are a wellness check.”

After renting an apartment in Westport Village in Swanzey for about a year and a half, the family built a home in Westmoreland in 1998, with Finnegan joining the fire department.

On Dec. 10, 2005, tragedy struck the Finnegan family, when his brother Tim died from a brain aneurysm at the age of 44, leaving as a widow Susan’s sister Jill, who had married Tim. Finnegan’s father had also died from the same cause.

In a bizarre coincidence, exactly five years to the day after his brother died — Dec. 10, 2010 — Tom Finnegan also suffered a brain aneurysm.

Susan was traveling in the Burlington, Vt., area for her sales job with a medical device company, and Tom was getting ready for work when he felt a stabbing pain in the back of his head. Having a history of back trouble, he thought it might be connected.

“But in a few minutes, I had an overwhelming feeling that things weren’t right with my body, a type of sensation that I’d never felt before,” he says.

“I called from Burlington to say good morning,” Susan recalls, and she urged her husband to go to the hospital immediately. He did.

Once there, he saw a physician’s assistant who checked him out, but not seeing anything seriously wrong, sent him home. Finnegan went to work instead, but was sent home when coworkers observed he wasn’t acting normally. In the meantime, Susan rushed back.

Later that day, with Finnegan still suffering from an intense headache, they visited the hospital again, but again he was sent home and told to monitor the situation.

“His headache worsened, and the next morning, he couldn’t even bend down to pick up his shoes,” Susan says. They rushed to the emergency room, convinced something was seriously wrong. There, Finnegan underwent a CT scan.

“After that scan, people started flipping out,” Susan says. “A helicopter was called.”

Up at Dartmouth-Hitchcock in Lebanon, a team of doctors debated what to do, and an experimental procedure still in medical trials was performed. Finnegan spent more than three weeks in the hospital, then was transferred to Spaulding Rehabilitation Hospital in Boston until mid-January.

His recovery was long and arduous, Finnegan says, and he recalls precious little of the experience in the hospitals. He also says there are permanent effects from the aneurysm, primarily an impairment of his short-term memory. “For a long time afterwards, I was playing the ‘I’m OK’ game, but I wasn’t.

“One of the surgeons asked me about a year later how I was doing, and I told him that they don’t cut into your brain and there are no side effects. He answered, ‘Good point.’ ”

Susan says that the support from friends, coworkers and residents who were on Finnegan’s mail route was overwhelming. Within a few months, he was back at the Keene Post Office.

Now, 10 years later, Finnegan acknowledges that he got a second chance at life and that every day is a blessing.

At a glance: Tom Finnegan