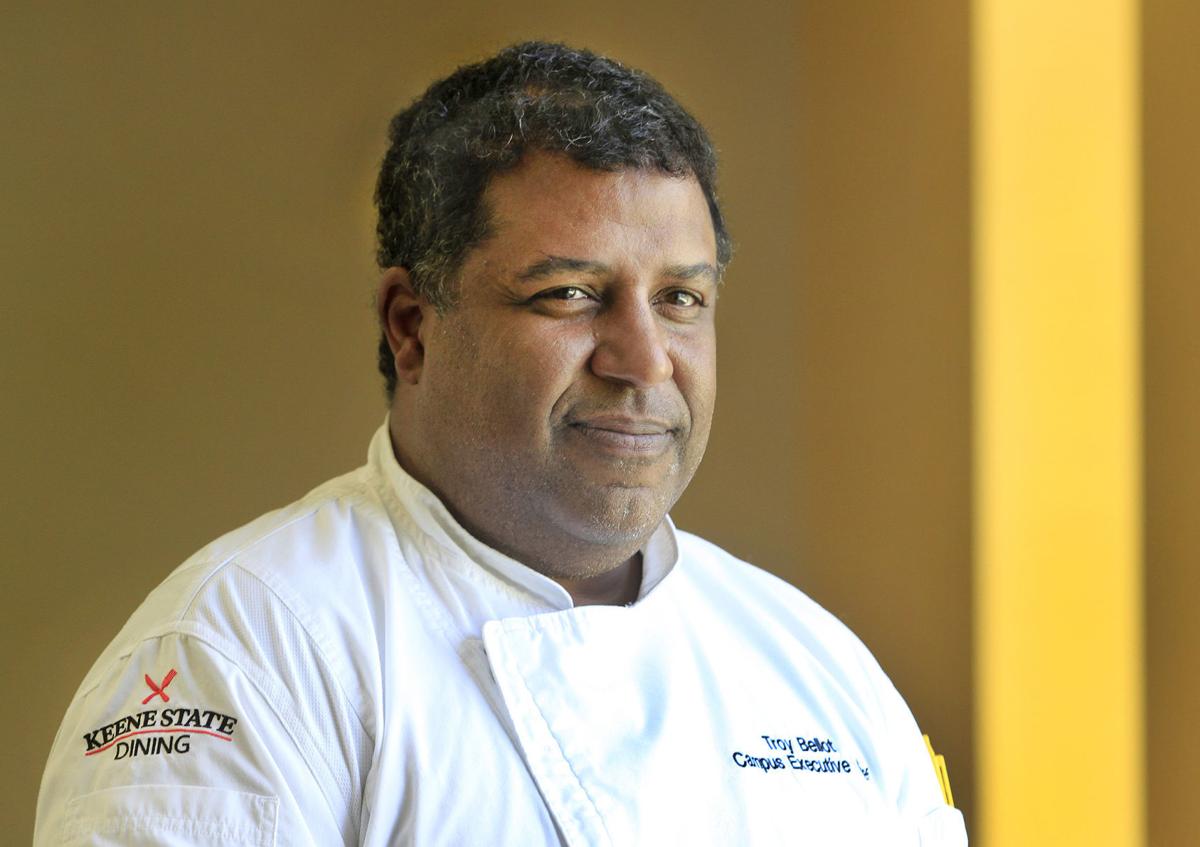 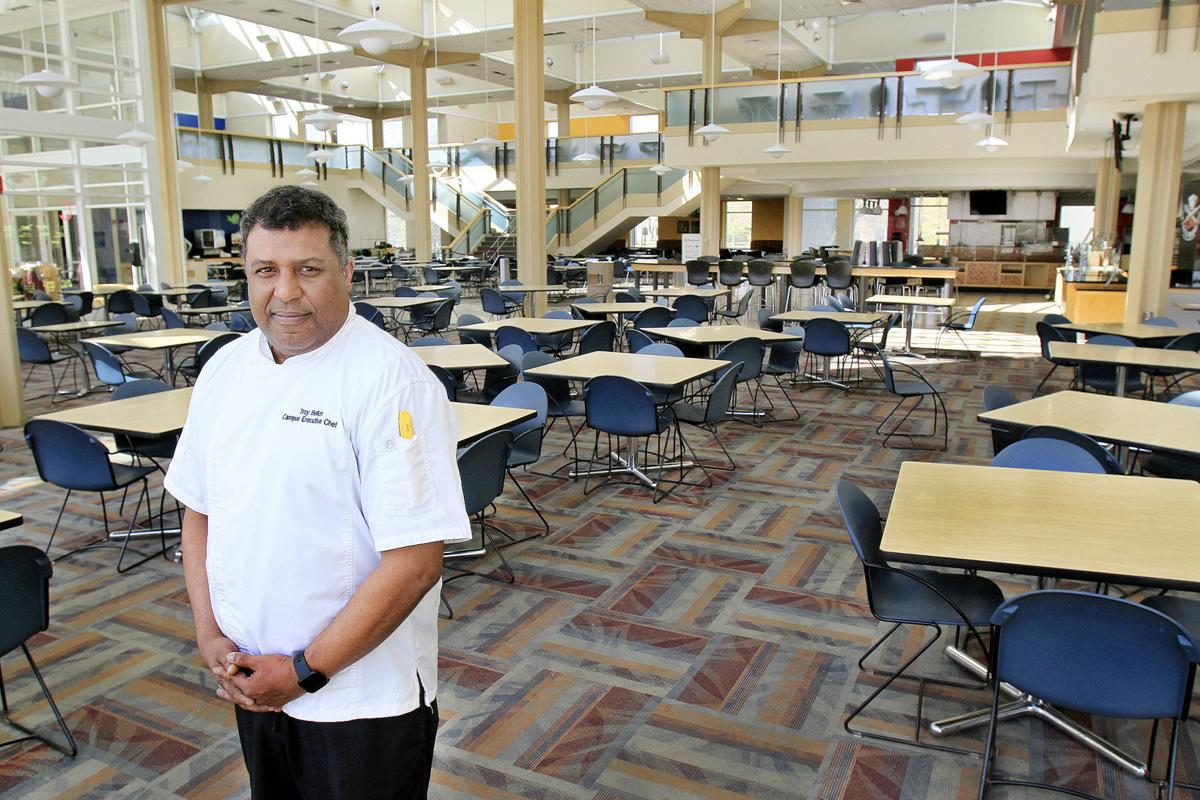 The fusion of culture and cuisine is what fuels Troy Bellot.

The executive chef for Keene State College’s dining services has a background that is rich with both. Born in the Big Apple, he spent much of his childhood in the Caribbean before his family began living more permanently in the States when he was about 10 years old.

His father, Peter, a pathologist from Dominica, traveled often with the family in tow, receiving training on new medical techniques and then teaching what he learned to other physicians. Bellot said he believes they made the move to the U.S. because of a job offer his dad received at Mount Sinai Hospital in New York City.

Bellot’s late mother, Karen, was from Jamaica; his parents met while his father was attending medical school on the island.

Bellot learned to cook from his Jamaican grandmother, and went on to study international studies and Middle East strategic policy at Ohio State University in Columbus. He said he worked for the U.S. Department of Justice for a few years, but found the job wasn’t a good fit and returned to Columbus. In looking for work, he applied for a position as a sous chef, and that got him on track to what has become a 25-year culinary career.

“I have always loved to cook and have cooked all my life,” Bellot said Wednesday. “Ultimately, it’s making somebody happy by something you create. That really feeds the ego, knowing that you made somebody feel good and likely made their day.”

Bellot’s training as a chef is rooted in experience and opportunity. The sous chef job he landed after returning to Ohio was at a French restaurant under an Italian chef, a local personality known as Chef Fred. The chef didn’t like speaking English, Bellot said, and this ended up working to his advantage, as the two shared common knowledge of another language.

“I kid you not, there were probably another 20 people who were in the process of interviewing for this job. Here I am, I don’t have the background in terms of the résumé, but I’m the only one who could speak French, and he just hires me,” he said.

Bellot initially learned the language as a child while living in Dominica, a former French colony. However, he noted, that French, called “patois,” is very different from the French he learned in high school and college.

Soon after taking the job, Bellot discovered he was already well educated in the kitchen thanks to his grandmother.

“One of the best chefs I worked with in my life was my grandmother. I spent a lot of time with her cooking in Jamaica. I discovered that a lot of what I was asked to cook I already knew, but I didn’t know the fancy name for it,” he said.

He looks back with fondness at cooking with her and his mother when she would join them. His mom was also a good cook, but not as good as his grandmother, who he said was known to family as Aunt Dottie. Aunt Dottie sometimes even took her culinary cues from television.

“I remember me as a kid sitting down at the TV with her, and we’d watch Julia Child. Then we’d go into the kitchen to recreate the recipes.”

At the restaurant in Ohio, Bellot said he went into strict learning mode and spent a significant amount of time working with Chef Fred. He worked his way up to executive chef after three years, and said he then decided to step out of the kitchen to work at the front of the house so he could learn the financial piece. He did that for two years.

“Then I took the wealth of knowledge I had gained and shifted over to the corporate world, and I took an executive chef position with The Limited.”

He handled the dining services not only for the clothing company’s corporate offices in Columbus, and events, but also for its subsidiaries, including Bath & Body Works, he said.

He called the experience “amazing,” explaining that he was involved in building Bath & Body Works’ corporate dining operation from scratch, and had access to a corporate jet he used to further his culinary education.

For example, there were times he would be able to get away from the office for a week or two to visit places such as Miami to learn the process of how fish got from the ocean to him and his staff. He spent a week in New York City working with sushi chefs, he said, and visited the Southwest to learn the flavor of its cooking.

After The Limited, Bellot worked for the 55 Restaurant Group, and owned a restaurant and catering business in Ohio.

Joan Van Epps of Cincinnati has known Bellot since the 1980s when he attended high school with her son, Justin.

“We have a long and wonderful history,” she said Thursday. “I refer to him as my honorary son. He spent so much time at my house in high school, and when he was in college, he’d come to see me.”

On holidays, she recalled, he’d cook the dinner for her family and friends.

“He’d come make these amazing, yummy, delicious dinners. My work colleagues know him as do their families, and my neighbors know him,” she said. “He is just such a sweetheart.”

He even “saved” her one time when she was visiting family in Seattle, she added.

“My son-in-law is a partner at PricewaterhouseCoopers. He asked me to host a party, and his wife was out of town. I had no idea what to do, so I called Troy. He told me exactly what do,” she said. “He knew the food stuff, and he knew the social stuff.”

Bellot said his interest in the world revolves around cooking and the different culinary styles associated with different cultures. The more his family traveled — whether to live in Jamaica or Dominica or on other Caribbean islands such as Antigua, Trinidad and Martinique, or in New York, Ohio or Pennsylvania — the more, he said, he understood and appreciated these different styles.

Bellot came to Keene in March 2019 after being hired by Chartwells Higher Ed to be the executive chef at Keene State.

During the academic year Bellot is responsible for feeding a little more than 3,000 people per day, managing a staff of 140, running catering operations and overseeing three eateries on the campus — the Zorn Dining Commons, the Hoot n’ Scoot and the Night Owl Cafe.

He admits he was woefully unprepared for what was left of the New England winter that year and the subsequent mud season.

“After about the first two weeks, I was going to Walmart pretty much every day getting what I didn’t have,” he said.

His friends in Portsmouth also tried to help him out by giving him a “New Hampshire kit” that included essentials such as a hat, ice scraper for his car and boots.

With both his daughters, Caleigh and Zoe, in college, Bellot said he was looking for a change, and had always been fond of the rural lifestyle. Two of his favorite activities are hiking and fly fishing, he noted. His hiking companion and partner in crime is his Labrador mix, Mia. He also loves coaching soccer, and worked with high school and club teams in Ohio.

He said he most enjoyed helping members of the Columbus Crew’s U-18 boys get ready for their professional and collegiate tryouts.

In New Hampshire, Bellot said he has had to choose between coaching and cooking, as his position at Keene State requires a very fluid and flexible schedule. However, he said he has an excellent rapport with the Keene State men’s and women’s soccer teams, and makes sure they are well fed.

While dining services continues to serve a small number of students who remain on campus during the COVID-19 pandemic, the focus now is on how the operation will work in the coming academic year.

“Right now it’s a fascinating study as to how we are going to go about things in the fall,” Bellot explained. “The whole world of buffet and self-service is gone, and it’s not coming back.”

Questions being examined include how to feed 3,000 people a day safely and efficiently with no seating, where meals may be distributed on campus and what precautions dining services staff will have to take when they come to work, he said.

“There are a lot of logistics and moving parts, and we have to be flexible as the guidelines change,” he said. “Any plan we have right now is subject to change.”

“You’re constantly trying to innovate, but make sure you’re still serving your audience,” he said. “That includes the student who wants a chicken finger every day.”

At a glance: Troy Bellot