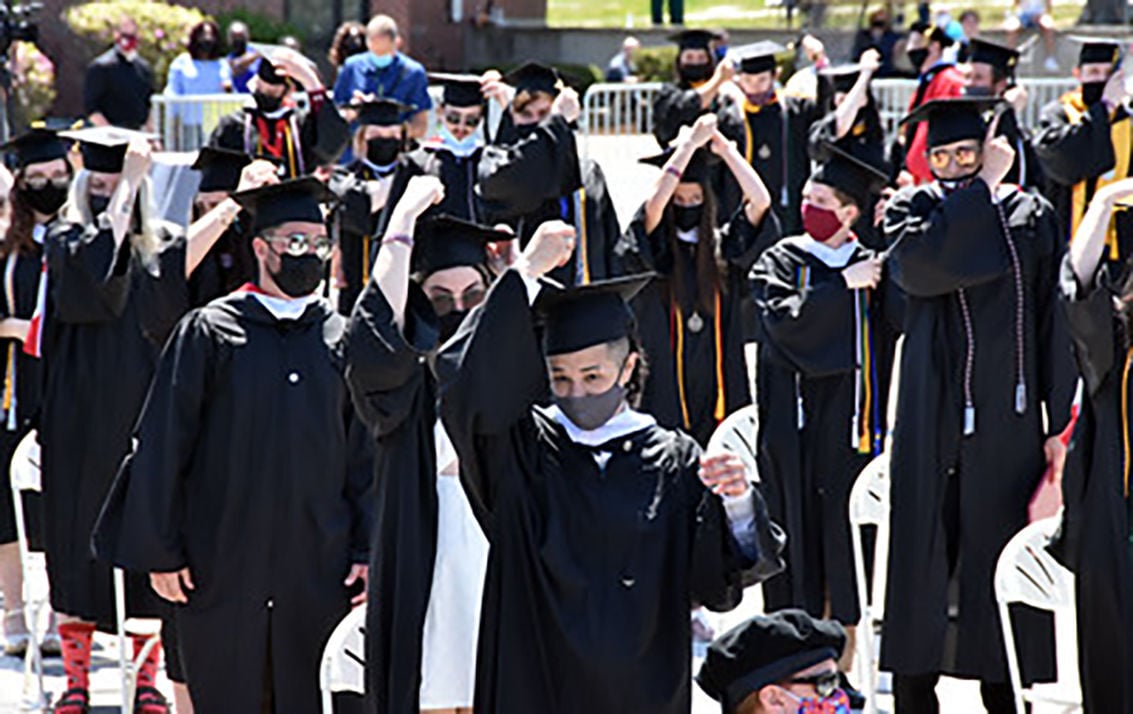 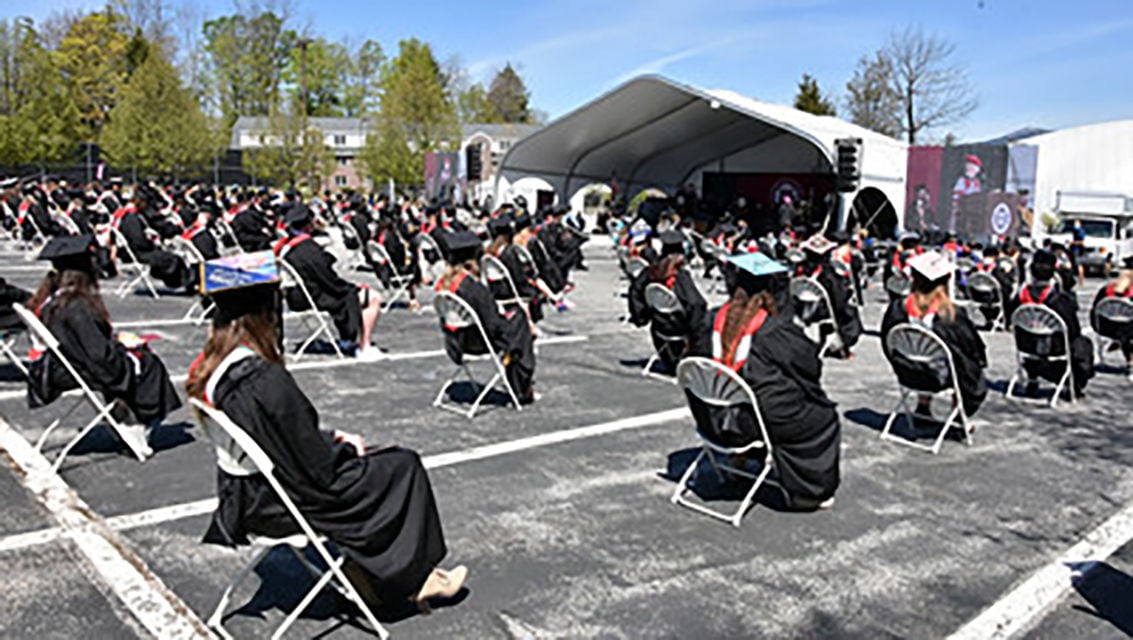 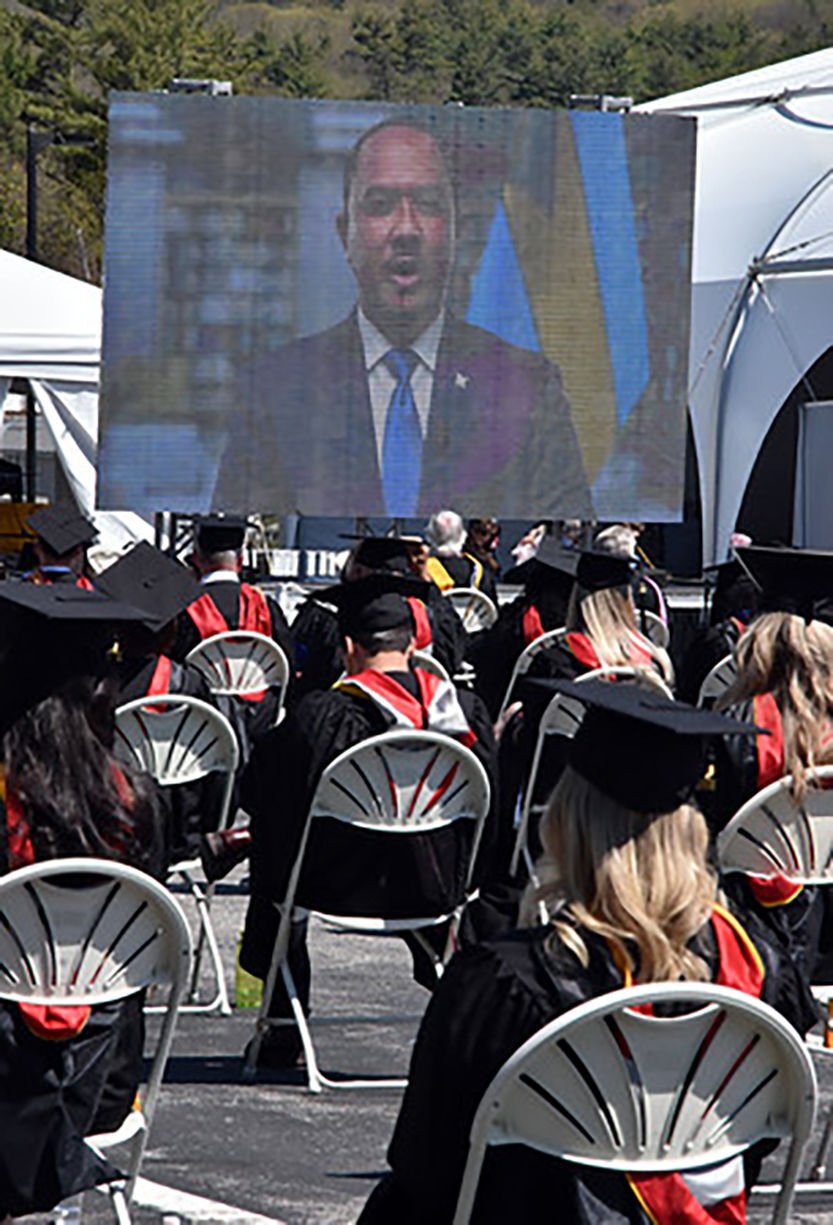 Students watch a pre-recorded speech by Shanendon E. Cartwright, a member of the parliament of the Bahamas, who received an honorary degree Saturday. 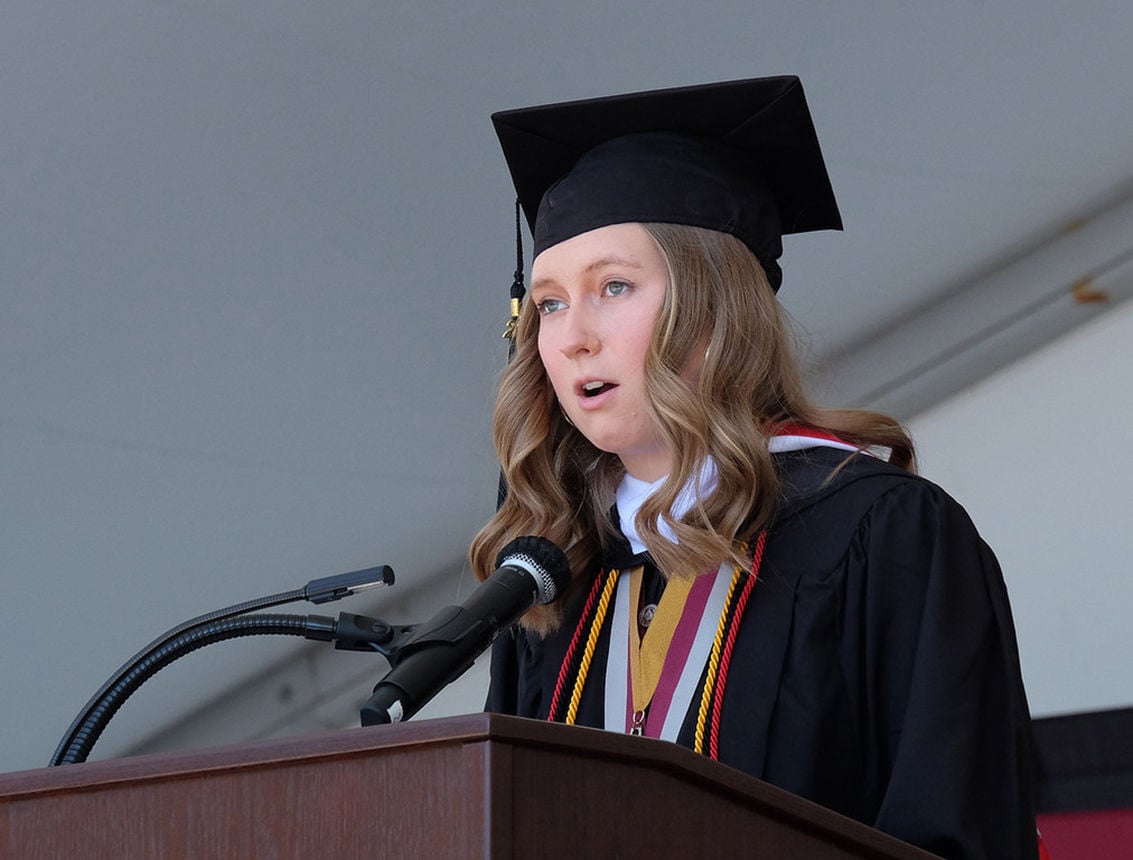 Valedictorian Amalia Traffie tells classmates, “”While I don’t want to give too much attention to COVID-19 today, because I think it has overwhelmed our thoughts enough, I do want to recognize the tremendous hurdles that we have overcome.”

Students watch a pre-recorded speech by Shanendon E. Cartwright, a member of the parliament of the Bahamas, who received an honorary degree Saturday.

Valedictorian Amalia Traffie tells classmates, “”While I don’t want to give too much attention to COVID-19 today, because I think it has overwhelmed our thoughts enough, I do want to recognize the tremendous hurdles that we have overcome.”

Those were the words used during Saturday’s commencement to describe Franklin Pierce University’s Class of 2021, which spent more than a year under constant change amid the COVID-19 pandemic.

“Today is yet another first in the university’s 15-month effort to proceed with caution and grace to complete this academic year in a safe and fulfilling way,” said President Kim Mooney. “ ... Congratulations to the Class of 2021 — our rain-or-shine class.”

With face masks and distanced seating, roughly 550 undergraduate, graduate and doctoral students received their degrees under clear skies in an outdoor ceremony at the university’s Rindge campus.

Only the graduates were allowed to attend in person due to the COVID-19 pandemic, so the ceremony — the university’s 56th commencement — was live-streamed for people to tune in. Some members of the Class of 2020, who did not have an in-person graduation but a virtual ceremony in August, were also in attendance.

As undergraduate Valedictorian Amalia Traffie of South Dakota addressed her fellow classmates Saturday, she urged them to fight for a better world.

“We emerge from this experience equipped with knowledge, new-found skills and well-steeped ambition,” she said. “My hope is that we carry these gifts forward, using them every day, to make the world a kinder, richer and more understanding place.”

And while it’s typical for a valedictorian to congratulate the class, Traffie made it a point to honor her fellow students for making it to graduation day amid the pandemic.

“While I don’t want to give too much attention to COVID-19 today, because I think it has overwhelmed our thoughts enough, I do want to recognize the tremendous hurdles that we have overcome,” she said. “ ... Our presence here today proves our desire to learn and embrace life deeply despite it all.”

The university also conferred an honorary degree Saturday on Shanendon E. Cartwright, a native of the Bahamas, who graduated from Franklin Pierce in 2001.

He was the first person of color to chair the university’s Judicial Board, a group of students that hears cases involving potential violations of the school’s code of conduct.

As a student, he received the prestigious President’s Award for Leadership and Contribution and was named a New England Collegiate Conference Academic Scholar-Athlete in men’s basketball.

Today, Cartwright is now a member of parliament in the Bahamas.

In a pre-recorded speech projected on a screen Saturday, Cartwright said in every generation, there are “defining moments that challenge the human spirit.” For the Class of 2021, he said, that is most certainly the pandemic.

“I say with a resounding sense of administration that this story isn’t being written about you. It is being written by you,” he said, “for your legacy is not in your trials and tribulations, but in your triumph.”

Cartwright added that the graduates have been blessed by their education and urged them to continue to use it to “give mankind the best of your intentions.”

In addition to the honorary degree, the university awarded its annual Honorable Walter R. Peterson Citizen Leader Award, which recognizes commitment to public service and higher education. Peterson served two terms as governor of New Hampshire and was president of Franklin Pierce from 1975 to 1995.

This year’s honoree, Chief Justice John T. Broderick Jr., served 22 years as a trial lawyer before he was appointed to the N.H. Supreme Court, where he served for 15 years, seven as chief justice.

For the past five years, he has worked on a mental health campaign, traveling to middle and high schools, as well as colleges and universities, to bring awareness to mental health issues.

Broderick told the Class of 2021 — also in a pre-recorded speech — that he started this campaign at the age of 67, and that it is “the most important work I’ve ever done.”

He encouraged class members to keep an open mind throughout their lives and always to be on pursuit of their life’s purpose.