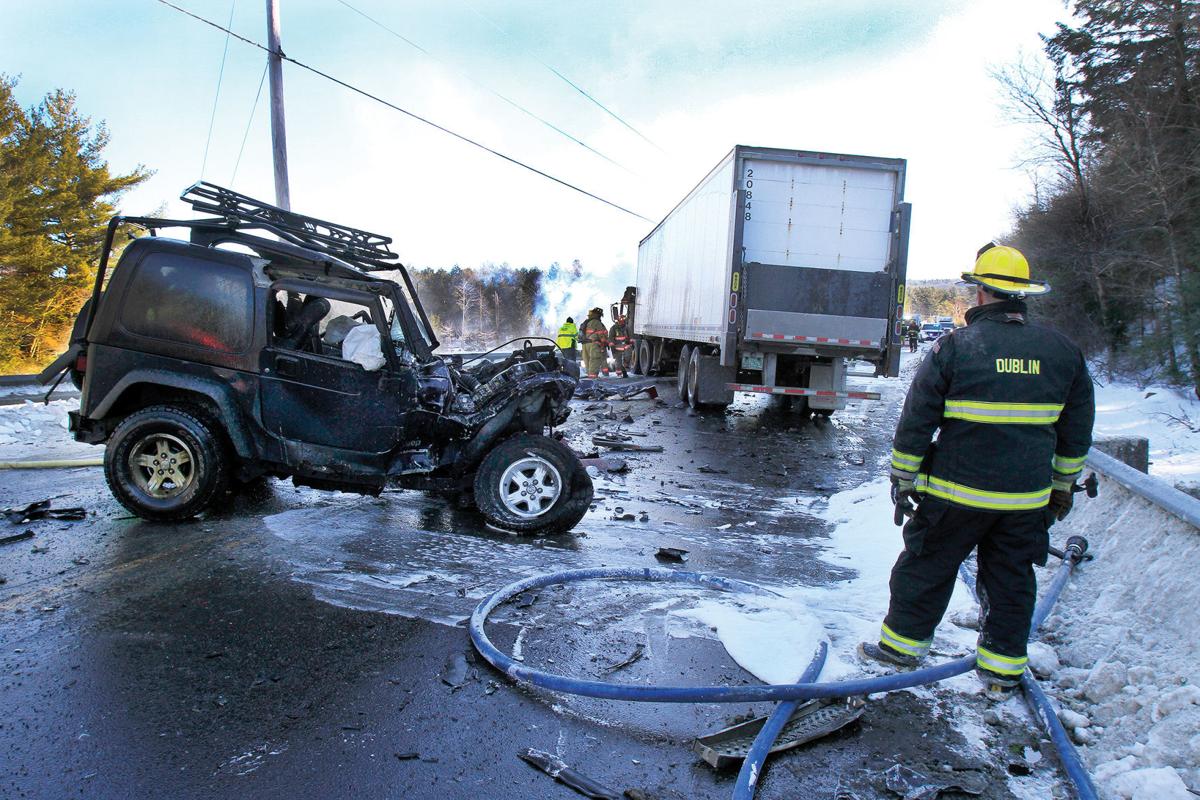 A Jeep Wrangler and tractor-trailer were involved in a crash on Route 101 in Dublin Tuesday that injured four people. Below, the collision ruptured the tractor-trailer’s fuel tank, causing a large fire. 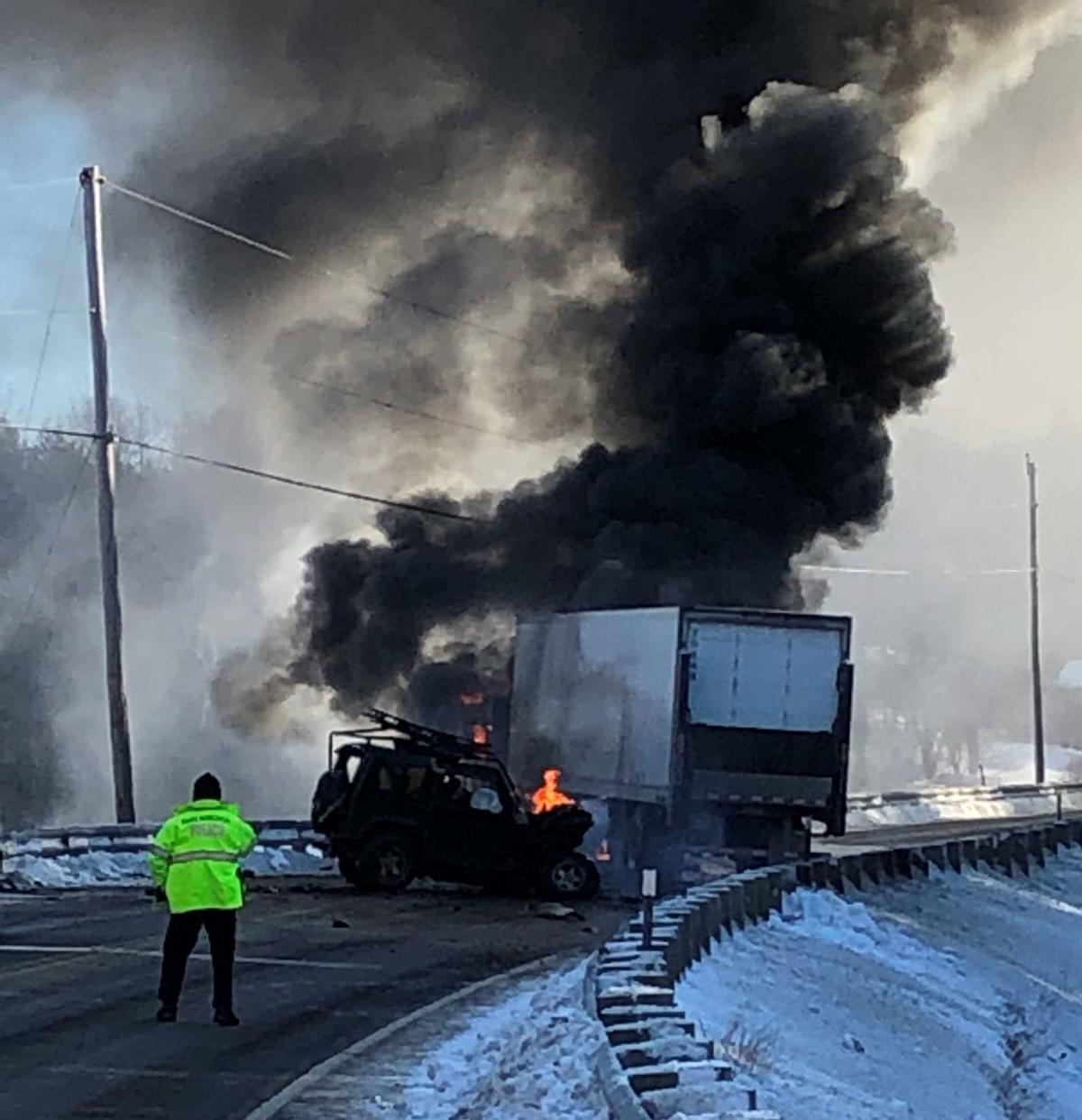 This crash and subsequent fire occurred on Route 101 near Howe Reservoir in Dublin. Four people were injured, one seriously. 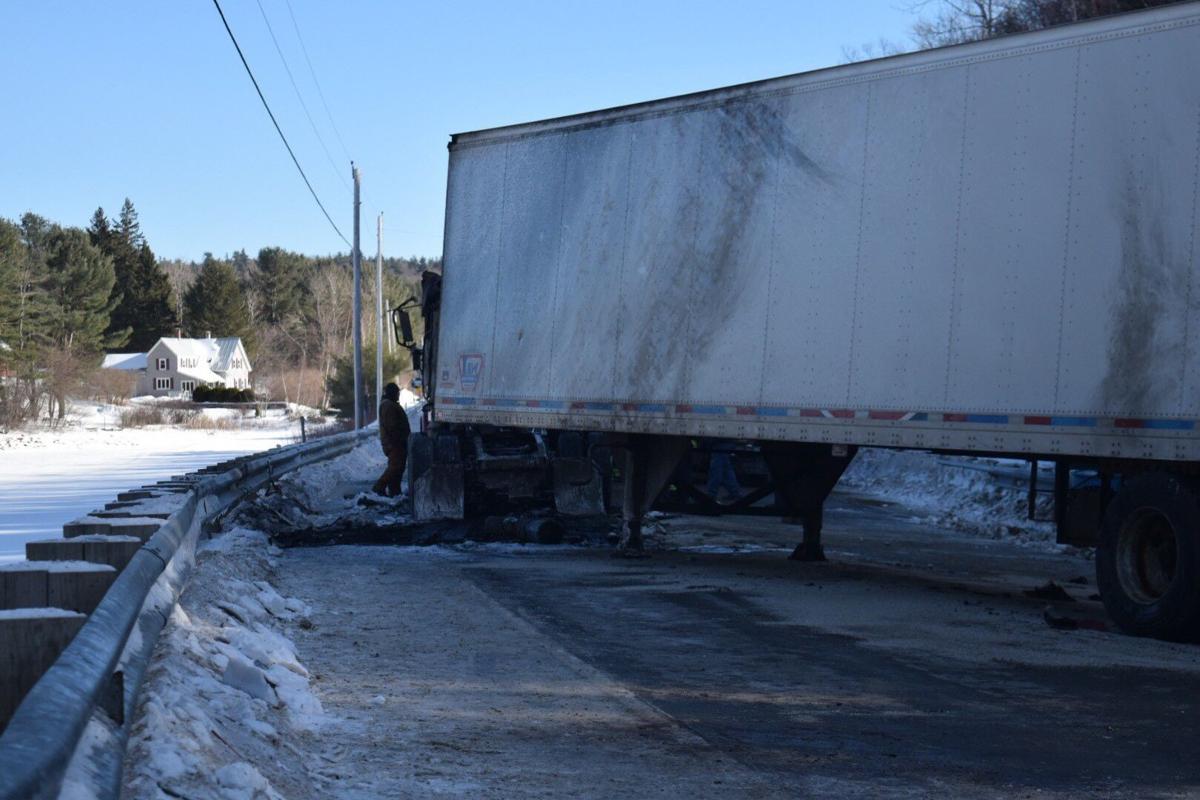 This tractor trailer was involved in a crash and caught fire on Route 101 in Dublin.

A Jeep Wrangler and tractor-trailer were involved in a crash on Route 101 in Dublin Tuesday that injured four people. Below, the collision ruptured the tractor-trailer’s fuel tank, causing a large fire.

This crash and subsequent fire occurred on Route 101 near Howe Reservoir in Dublin. Four people were injured, one seriously.

This tractor trailer was involved in a crash and caught fire on Route 101 in Dublin.

Manchester resident Samuel Lachance, 18, was driving a Jeep Wrangler west when he crossed the center line, striking a tractor-trailer in the opposite lane head-on, Dublin police said in a news release Tuesday evening. The impact caused the tractor-trailer’s fuel tank to rupture, causing a large fire, police said.

Lachance was taken by helicopter to Massachusetts General Hospital in Boston, according to the release.

A Massachusetts General spokesman said this morning that Lachance was not on the list of patients he is authorized to discuss. Police said at the scene Tuesday he was taken to the hospital in critical condition.

A spokeswoman for Keene State College said this morning that Lachance is a freshman there. Tuesday was the first day of classes for the spring semester.

The driver of the tractor-trailer — identified in the news release as Jean Morency, 66, of Nashua — was able to escape the cab and was taken by ambulance to a hospital with minor injuries, Dublin police Officer Ryan Vaclavik said at the scene.

Vaclavik said a third vehicle, a Toyota Sienna, was traveling behind the Jeep. He said after the Jeep hit the tractor-trailer, the Sienna went through the fire and hit the Jeep.

Dublin Police Chief Timothy Suokko said the driver, Marc Cramer, 47, of Peterborough, and his son, John Cramer, 18, also of Peterborough, were unharmed, but were taken to Monadnock Community Hospital as a precaution.

He said the tractor-trailer was owned by the Nashua-based Law Motor Freight Inc., and that the vehicle was empty at the time of the crash. A spokesperson for the company was not immediately available for comment this morning.

Morency was also taken to the Peterborough hospital with minor injuries, the release says.

The crash was reported at about 10:15 a.m. Its cause is under investigation, according to police. Route 101 was closed to traffic until about 5:30 p.m. Tuesday, according to Southwestern New Hampshire Fire Mutual Aid dispatch.

Keene resident Nuttapon “Bank” Promploy was driving behind the tractor-trailer at the time of the crash, which he said happened in an instant.

“There was a boom and a big fireball, just like in the movies,” said Promploy, who owns Thai Cafe in Peterborough.

He said he thought the tractor-trailer’s engine exploded, and soon saw a van from the opposite lane coming through the fire. Promploy said he parked his car on the side of the road, called 911 and walked over to the van. The driver and passenger appeared to be unharmed, he said. Promploy said the van’s passenger, who was later identified as John Cramer, helped him pull the Jeep’s driver from the burning vehicle and lay him on the side of the road. The man’s hands were burned, and he was fading in and out of consciousness, Promploy said.

“You kind of just saw that, and something had to be done,” he said of his part in helping the Jeep’s driver. “You don’t want to think about it.”

Dublin Fire Chief Thomas Vanderbilt said Tuesday evening that the tractor-trailer had about 150 gallons of fuel in its saddle tank. Much of it burned up in the fire, he said, but about 35 gallons spilled onto the highway.

Fire department personnel put an absorbent material on the road and called the N.H. Department of Environmental Services and another company to assist with the cleanup, according to the news release.

First responders called in personnel from several local departments, Vanderbilt said, because the tractor-trailer fire happened right under a power line, and there was concern it was going to spread.

Vanderbilt said firefighters got the fire under control quickly, and Eversource personnel came out to check the line and deemed it safe.

“It was a bad day for a lot of people,” he said. “But it could have obviously been worse. If that truck driver hadn’t gotten out ... it was not a tenable environment when we got there.”

In addition to Dublin fire and police departments, Marlborough and Harrisville police were on the the scene, according to the news release.

The Marlborough and Peterborough fire departments, along with DiLuzio Ambulance, also responded, as did N.H. State Police and the N.H. Department of Transportation.

In the crash’s aftermath, much of the front and roof of the Jeep were caved in. The minivan sustained less severe damage to its front bumper, while its sides and back remained unscathed.

The truck was charred, and the trailer had split from the cab as crews attempted to tow the vehicle from the scene in the early afternoon. Pieces of the vehicles were strewn along the road’s shoulder.