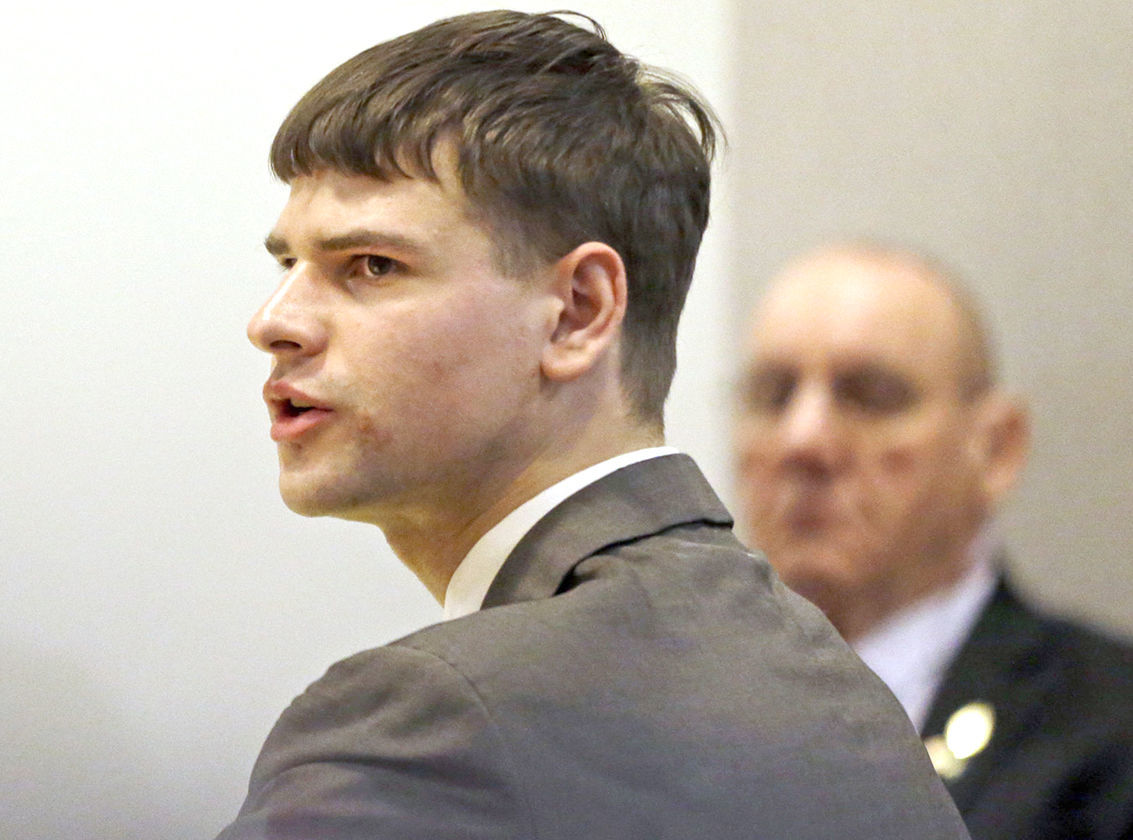 Nathan Carman appears in April 2018 at a hearing in Concord regarding his inheritance from the estate of his grandfather, John Chakalos, who was murdered in 2014. 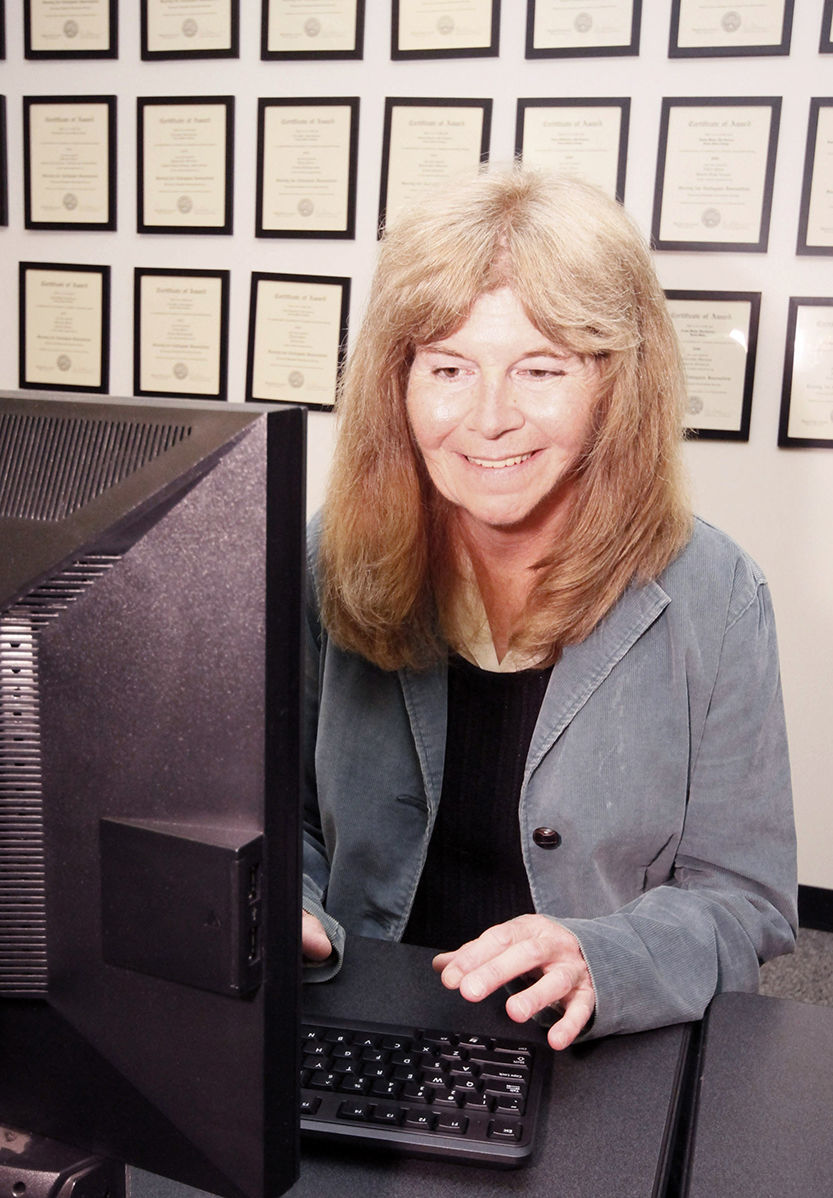 Marianne Salcetti, an assistant professor of journalism, multimedia and public relations at Keene State College, has brought suit against the city of Keene over right-to-know requests her students filed in 2018 that she says were improperly handled.

Nathan Carman appears in April 2018 at a hearing in Concord regarding his inheritance from the estate of his grandfather, John Chakalos, who was murdered in 2014.

Marianne Salcetti, an assistant professor of journalism, multimedia and public relations at Keene State College, has brought suit against the city of Keene over right-to-know requests her students filed in 2018 that she says were improperly handled.

Several lawsuits with connections to the Monadnock Region are pending before the N.H. Supreme Court. The outcomes could have implications ranging from the way schools are funded to whether Winchester gets a long-awaited Dunkin’ Donuts franchise.

But appeals can be a long slog. Records from the lower court must be submitted. Parties to the case must prepare written briefs arguing their side and, sometimes, explain those arguments to the court in person. Eventually, the justices issue their order.

The local cases include:

* An education-funding lawsuit brought by ConVal and other local school districts.

* An open-records dispute between former Keene State journalism students and the city of Keene.

* A planning board appeal challenging a proposed a gas station, convenience store and Dunkin’ Donuts in Winchester.

* An appeal of an order dismissing a civil case accusing Nathan Carman of killing his grandfather John C. Chakalos, a Keene native who had a home in Chesterfield.

Here’s a look at where those four cases are in the appeals process.

A final resolution is still a ways off in this lawsuit, which could affect how the state government and local school districts share the cost of paying for K-12 education.

The ConVal Regional School District, based in Peterborough, filed a lawsuit in March challenging the formula New Hampshire uses to determine how much funding the state provides to school districts. The Winchester, Monadnock and Mascenic school districts later signed on to the suit.

ConVal argues the formula short-changes local school districts, in violation of the N.H. constitution that requires the state to provide an adequate education for each student. The less money a school district receives from the state, the more it must bring in from other revenue sources — which generally means local property taxes.

The state, represented by the N.H. Attorney General’s Office, appealed the ruling in August. The school districts have filed a cross appeal asking the high court to reconsider some parts of Ruoff’s ruling that they disagree with.

The Supreme Court originally set a deadline of this week for the state to file its brief. But the Attorney General’s Office has requested more time, citing the complexities of the case and the workload of some of its lawyers.

Under the proposed briefing schedule — agreed to by the school districts’ attorney, Michael Tierney — the state would file its brief by Feb. 3. Tierney would have two months to file an opposing brief, then the state would have until May 3 to reply to that brief.

Carole Alfano, a court system spokeswoman, said she expects the court to grant the extension.

John Tobin, a lawyer who was involved with past school-funding litigation that reached the Supreme Court, said it can be hard to predict when the justices will schedule oral arguments or issue an order.

“I’m guessing if all the briefs are in by May, that they’ll try to have the argument within a couple of months,” said Tobin, who plans to submit an amicus brief supporting ConVal and the other school districts. “But who knows.”

The justices would rule on the case at some point after that. According to information from the court system, the court generally issues orders two to six months after oral arguments.

It’s been two years since a group of journalism students at Keene State College — represented by their professor, Marianne Salcetti — filed this lawsuit in Cheshire County Superior Court.

The parties are now awaiting a ruling from the high court, having appeared before the justices for oral arguments Nov. 20.

The case originated with public records requests that five students filed with the city of Keene, as part of Salcetti’s fall 2017 public affairs reporting class. The city either denied the requests or responded to them in ways the students found unsatisfactory.

The five requests involved restaurant inspections, police officers’ use of force and certain types of criminal investigations. They were denied for different reasons, including personnel privacy. The city saw some requests as asking staffers to create custom reports — something they are not required to do under New Hampshire’s right-to-know law, which codifies the public’s right of access to governmental records.

The students argued the city violated that law in how it handled their requests. But Ruoff, the Cheshire County judge, concluded that the city’s actions were generally in compliance with the law.

Winchester not done with Dunkin’

Kulick’s Inc. v. Town of Winchester and the Winchester Planning Board

For the better part of the decade, S.S. Baker’s Realty Co. LLC has been seeking to build a gas station with a convenience store and Dunkin’ Donuts drive-thru at the corner of Warwick Road and Route 10.

This is the third time a version of the project has reached the state’s high court, and could be the final word on whether it gets built.

The parties have submitted briefs but have not yet been told whether the court will schedule the case for oral argument, according to Gary Kinyon, the attorney representing S.S. Baker’s Realty.

Teofilo A. Salema, the company’s manager and registered agent, died in October. Kinyon said that does not affect the status of the court case.

A nearby grocery store, Kulick’s Inc. at 30 Warwick Road, is challenging the Winchester Planning Board’s approval of the project. Kulick’s has raised concerns about traffic turning left into and out of the driveway on Route 10.

The current dispute arose because S.S. Baker’s returned with a modified plan, which the planning board approved last January. That approval, and the Superior Court decision upholding it, is the subject of the current Supreme Court appeal.

It was an anticlimactic end to a sensational case. In May, a New Hampshire judge dismissed, on grounds he lacked jurisdiction in the case, a lawsuit accusing Nathan Carman of killing his grandfather, John C. Chakalos, to collect a multimillion-dollar inheritance.

The plaintiffs — Chakalos’ three surviving daughters, who are Carman’s aunts — appealed the dismissal order to the N.H. Supreme Court in June. But lawyers for the aunts now say that procedural developments in Connecticut related to Chakalos' estate could mean an end for the proceedings in New Hampshire, including the Supreme Court appeal.

Chakalos, 87, a Keene native who kept a house in West Chesterfield, was shot to death in his Windsor, Conn., home in December 2013. The authorities have not charged anyone with the murder.

Less than three years later, Carman’s mother, Linda Carman, went missing during a fishing trip with her son off the coast of Rhode Island.

Carman’s aunts allege their nephew caused both deaths as part of a scheme to benefit from his wealthy grandfather’s estate. Carman, a Vernon, Vt., resident, has repeatedly denied the accusations.

The lawsuit in New Hampshire, filed in 2017, sought to block Carman from inheriting that money. Judge David D. King of the 6th Circuit Court Probate Division in Concord dismissed the lawsuit after almost two years of legal wrangling, concluding that he didn’t have jurisdiction because Chakalos was a Connecticut resident.

It is that order Chakalos’ daughters appealed to the high court.

This article has been updated to include the fact that lawyers for Chakalos' daughters say developments in Connecticut could end the pending New Hampshire matters.