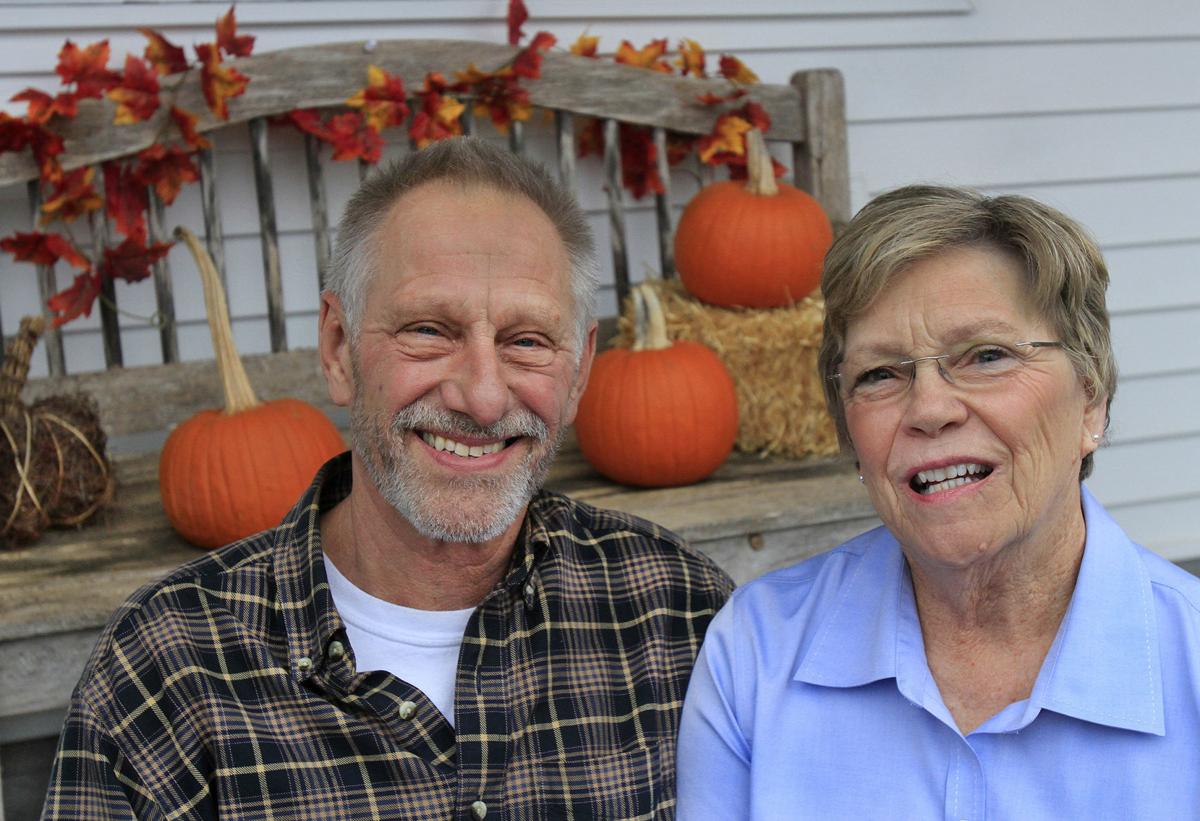 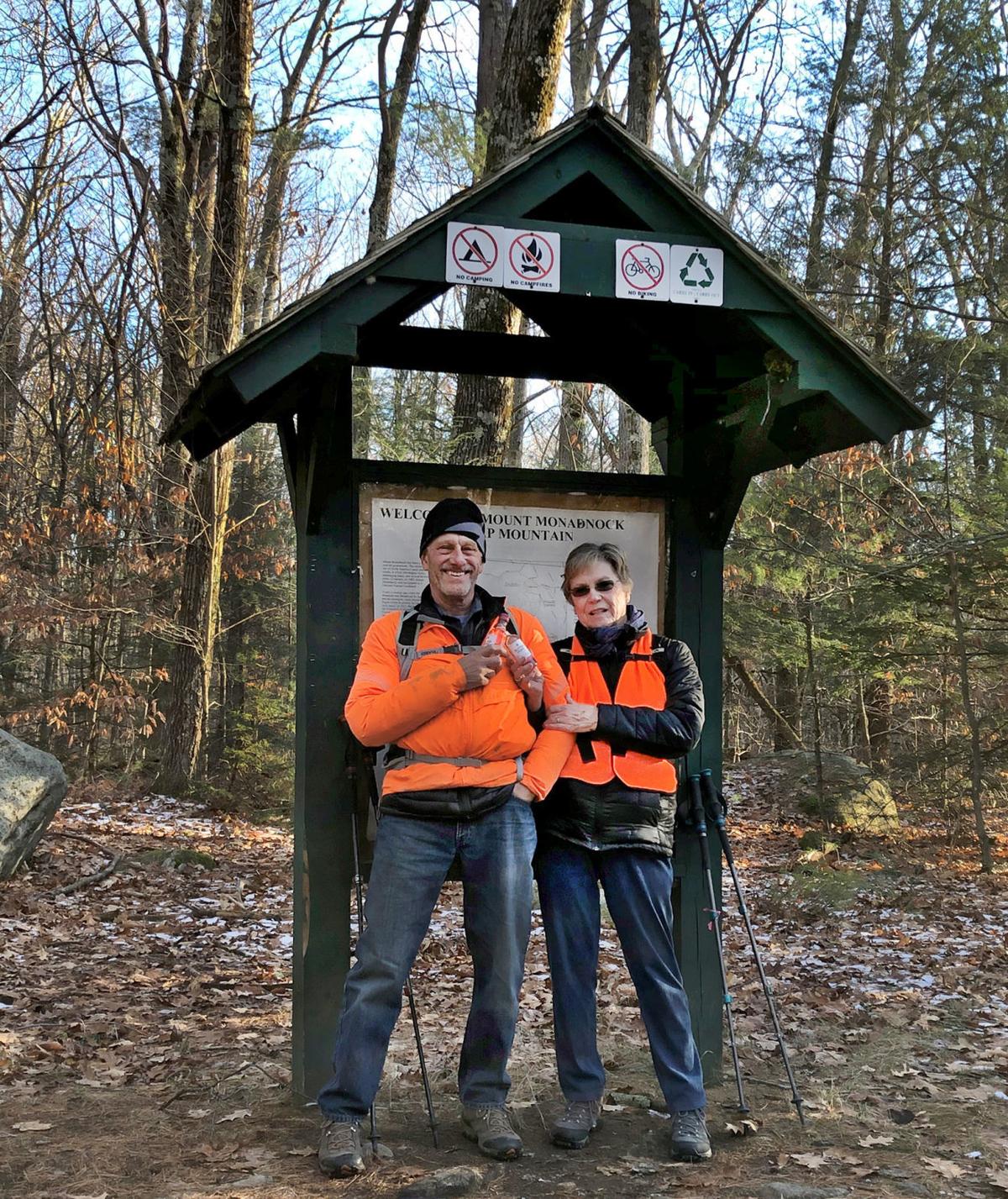 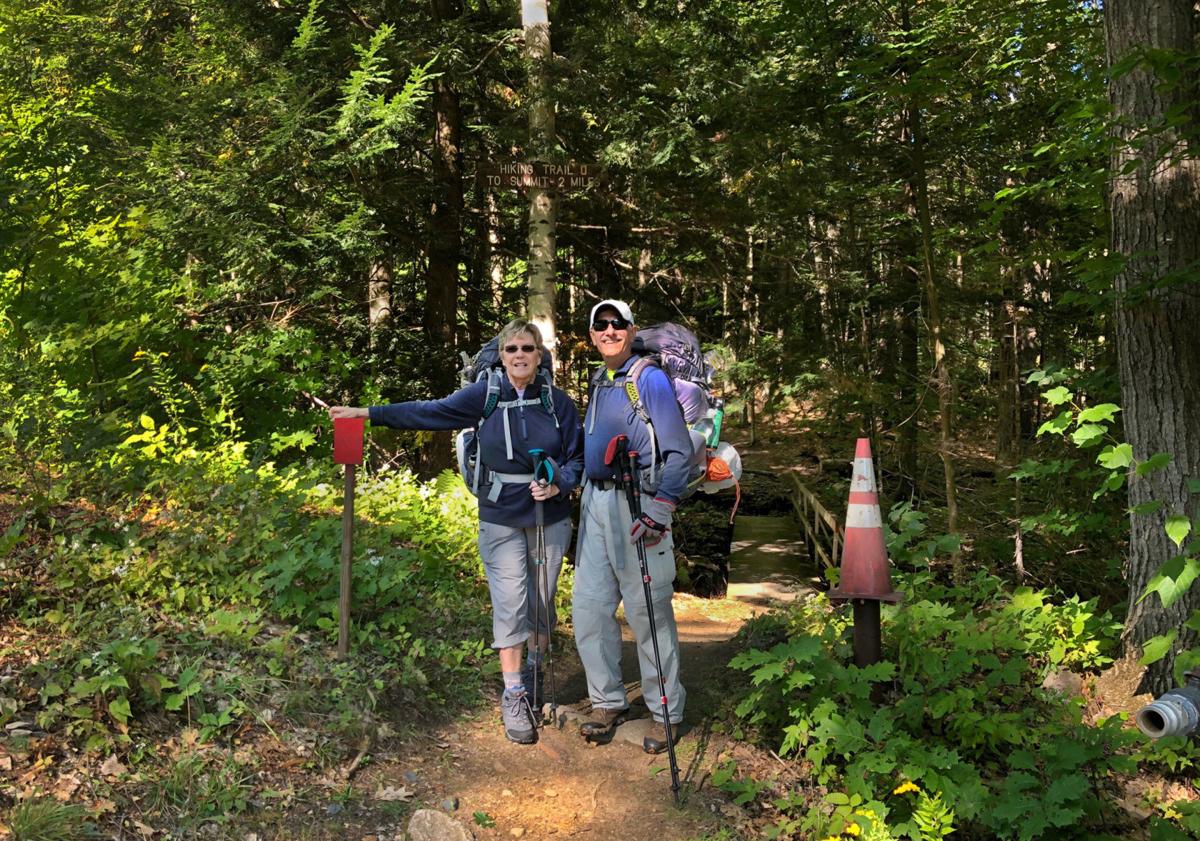 Tom and Kathy Forest of Swanzey at the base of Mount Sunapee as they begin the 50-mile Monadnock-Sunapee Greenway Trail.

Tom and Kathy Forest of Swanzey at the base of Mount Sunapee as they begin the 50-mile Monadnock-Sunapee Greenway Trail.

SWANZEY — Life is a journey. That may sound trite, but it’s such an important concept — the journey — that we have dozens of words for it, all with slightly different meanings. A pilgrimage, expedition, odyssey, quest.

Kathy and Tom Forest of Swanzey went on a journey this fall— a 50-mile hike to celebrate their 50th wedding anniversary. And for the couple, who were high-school sweethearts before marrying in 1969, it ended up having a deeper meaning all of its own.

It started out as a crazy idea Kathy dreamed up after they’d spoken with some people who’d hiked a significant portion of the Appalachian Trail. The 2,200-mile path known by avid hikers simply as the “AT” extends from Springer Mountain in Georgia to Mount Katahdin in Maine.

“I thought, hey, why not a hike to celebrate our anniversary?” Kathy says. “I remember telling a friend about the idea, and she asked me why we didn’t just think about going to Hawaii like ‘normal’ people do.”

Tom bought into it though. Their anniversary was Sept. 9, but their preparations started well before.

First, they had to consider their ages, she 70 and he 72. Even though both are in good shape, they knew it would require quite an effort.

Then, they had to decide where they would hike. Eventually, it came to them — the Monadnock-Sunapee Greenway, which runs from Mount Sunapee to Mount Monadnock. It’s a rugged trail that crosses mountains and steep, rocky terrain through Merrimack, Sullivan and Cheshire counties, passing through Newbury, Goshen, Washington, Stoddard, Nelson, Harrisville, Dublin and Jaffrey.

After that came weeks of research and preparation, speaking with experienced hikers who coached them on what to expect and the supplies they’d need to carry with them. A visit to Eastern Mountain Sports in Peterborough and advice from a saleswoman there with extensive experience in mountain hiking helped quite a bit, Tom says.

The next step was a hard one — getting their bodies into the kind of shape that could withstand such an exertion. Tom was already an experienced hiker, with a regular habit of climbing the Mount Caesar trail in Swanzey several times a week — “a short but very rigorous climb,” he says. Still, he had to step up his endurance.

Kathy began joining her husband on his hikes, and started a series of exercises at home, plus bumped up the frequency of her visits to the Keene Family YMCA.

“In hindsight, it was the most physically challenging effort of our lives,” she says of the trek. “You’re carrying your water, supplies, food, everything.”

The couple’s wider journey — their five-decade-and-counting journey together — started in Concord, where they were both born and raised. Tom would go on to earn an associate’s degree from the University of New Hampshire and she a nursing degree from N.H. Technical Institute.

He enlisted in the U.S. Army Reserves, assigned to an engineering battalion at Fort Belvoir in Fairfax County, Va. Following that, the couple moved to Logan, Utah, where he enrolled at Utah State University and graduated with a bachelor’s degree in soil science.

Then Tom got a job in Keene with the late John C. Calhoun, a prominent forester. He stayed with Calhoun for five years before beginning his own company as an independent wetlands scientist. Eventually, he started another company, Forest Designs, which designs sewage disposal systems.

Upon arriving in the Monadnock Region, the couple first lived in Walpole for five years, then moved to Keene until 1991, when they relocated to Swanzey.

They have two children — Jason, who lives in Croton-on-Hudson, N.Y., and a daughter, Sarah Ritter, of Winchester, Va. Their oldest, Jonathan, died of leukemia at age 9.

“It’s the worst loss you can experience,” Kathy says. “It’s the ultimate loss.”

Kathy began working as a nurse at the Elliot Community Hospital on Main Street in Keene in 1972, eight months before it was closed and the new hospital opened on Court Street. She ended up working 17 years in the emergency room, seven years on the Farnum Rehabilitation floor at the hospital, and two years as a recovery-room nurse.

After all the prep work for their golden-anniversary hike, the big day came Sept. 5, and Tom and Kathy were dropped off at the trailhead at Mount Sunapee. Tom carried a backpack weighing 38 pounds; Kathy’s weighed 24. Between the two packs were sleeping bags, freeze-dried food, water, a water-purifying kit, a small propane stove, a tent and other supplies.

Then they began their ascent into the wilds.

“The terrain was so challenging, but the weather was perfect,” Kathy says.

The first night, settled into a primitive campsite, the two of them looked at each other, fist-bumped, and congratulated themselves on making it that far. But both noticed their hips hurt from the weight of the backpacks. This was not just a walk in the park.

The next day, it was up early, a brief breakfast, and back to the hike. They made good progress, but it required a significant amount of exertion.

At the end of each day, they were exhausted but content.

As they continued on, they began to notice some things that at first seemed strange. For one, it was so quiet.

“There was nothing but quiet,” Kathy recalls. “You don’t realize that you’re around noise most of the day, but out there on the trail, it was just quiet, very quiet.”

The next thing they were struck by is that they were completely “unplugged.” “No phones, no radio, no television, no Internet,” Tom says.

That feeling of being removed from the world was odd, but they found it wonderful. “It was good for the soul,” Kathy explains. “It was like a mental housekeeping.”

They met only seven other hikers on the trail during their entire trip. And, astoundingly, they saw no animals the whole time — “not even a squirrel,” Kathy says. “But that didn’t mean they didn’t see us.”

The evening of their actual wedding anniversary, they diverted from the trail and stayed at a cabin on Halfmoon Pond, owned by a friend.

“What I didn’t know was that Tom had driven up there days before and left a bottle of wine, seafood chowder and lobster, and one red rose for me. Food never tasted better than that night,” Kathy says. “And we had a normal bed to sleep in.”

The next day, nearing late afternoon, the couple stood on the trail looking up to the 2,000-foot Jackson Hill in Cheshire County. “I remember staring up at that trail and wondering how we were going to do it before settling in for the night. But we did it,” she says.

According to Tom and Kathy, hiking buffs often speak of a concept called “Trail Magic” — an unexpected discovery or event that often happens on a long hike.

In their case, it was coming upon a group of Seventh-day Adventists doing maintenance work on their church.

“They were all working away, they had a grill going, a picnic set up, and they invited us to join them. It was a delightful visit. It was our trail magic,” Kathy says.

What they had found was the First Adventist Church and cemetery in Washington on what’s called the Sabbath Trail. That church, built in 1844, is the location of the founding of the Seventh-day Adventists denomination in the United States.

After five days, a friend picked them up and brought them home.

They had actually completed only 30 miles of the 50-mile journey, but had to get back because Tom had to go to work. They finished the remaining 20 miles in a couple of weekend hikes.

“When we were driven back to Keene, it was sensory overload; we had been in the quiet for so long,” Kathy says.

“In hindsight, it was very satisfying,” she added. “We were both impressed with what our bodies could do. We realized how much you can train yourself and how much stronger you can become, even at our age.”

The two them both mentioned that the experience taught them to appreciate the beauty of nature, and the need for quietude amidst a world of noise, rancor and seeming chaos.

Ironically, once they got back home to Swanzey, they discovered they’d missed an apparent visit from a bear that destroyed their bird feeders.

In January, after running his company for 41 years, Tom will sell Forest Designs to a long-time employee, Nate Levesque of Keene.

He has no plans to stop working, although he says he is looking forward to throttling back on the hours at the company he founded, this time as an employee.

Kathy, who ran a gift store from their home on the weekends for a decade up until 2005, is fully retired.

The couple’s plans for the future include more travel, some in their camper van, and more visits to their children and grandchildren.

“And, we might hike a section of the Appalachian Trail,” Kathy says.