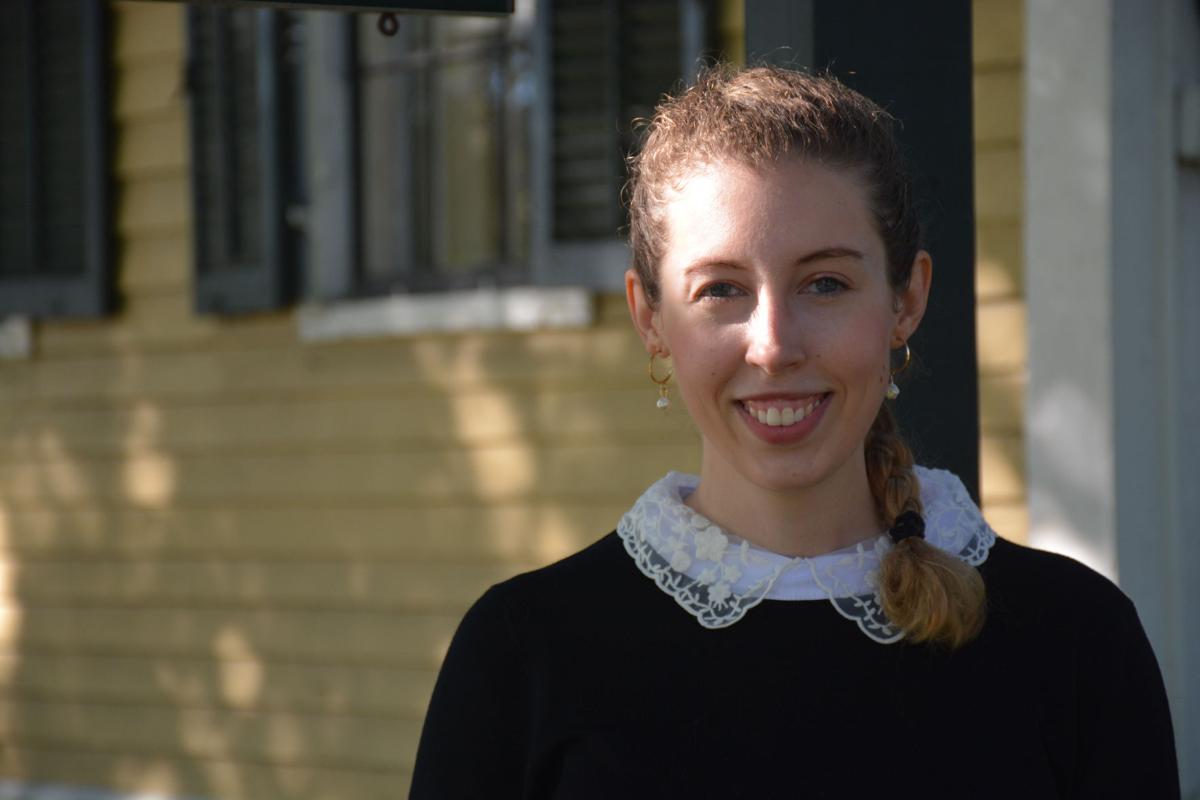 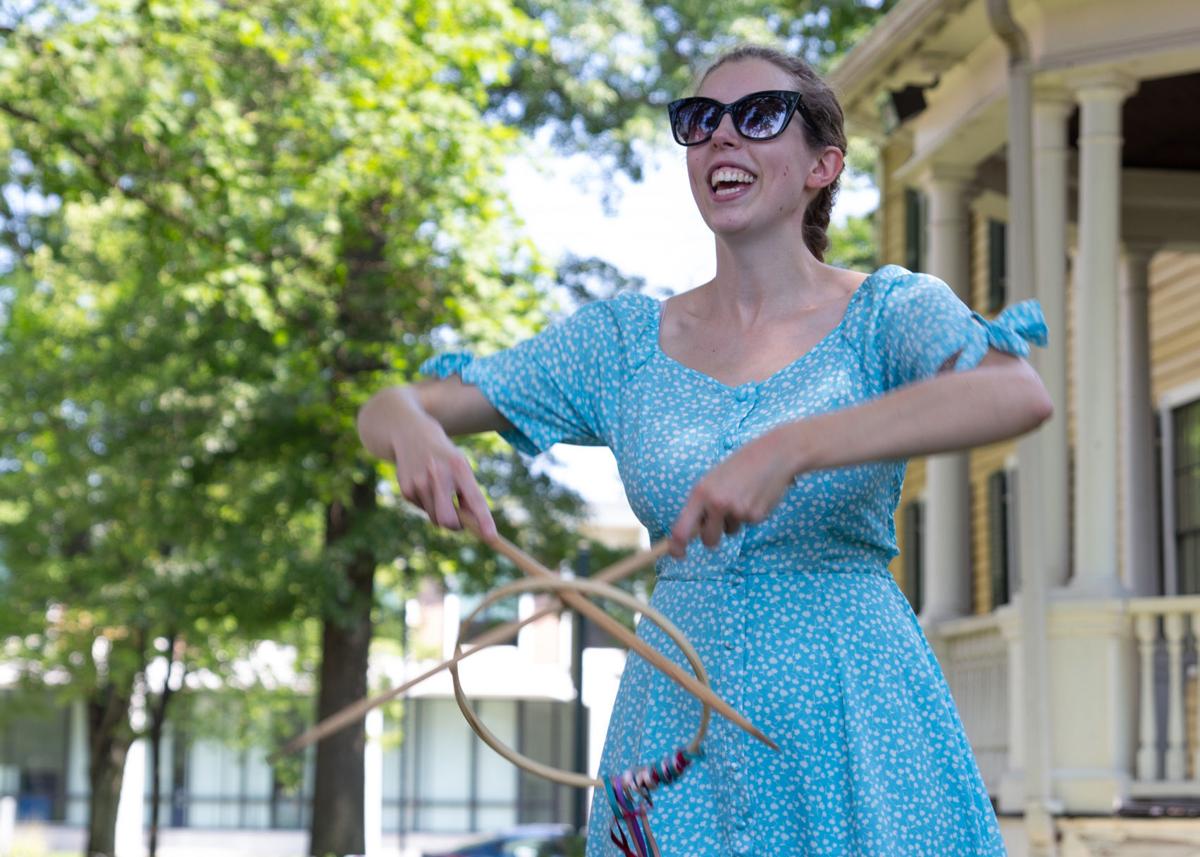 Sofia Thornblad plays Game of Graces with Athena Mooney, 9, of Keene (not pictured) during the Old-Time Children’s Games in the Garden event at the Horatio Colony House Museum in August. 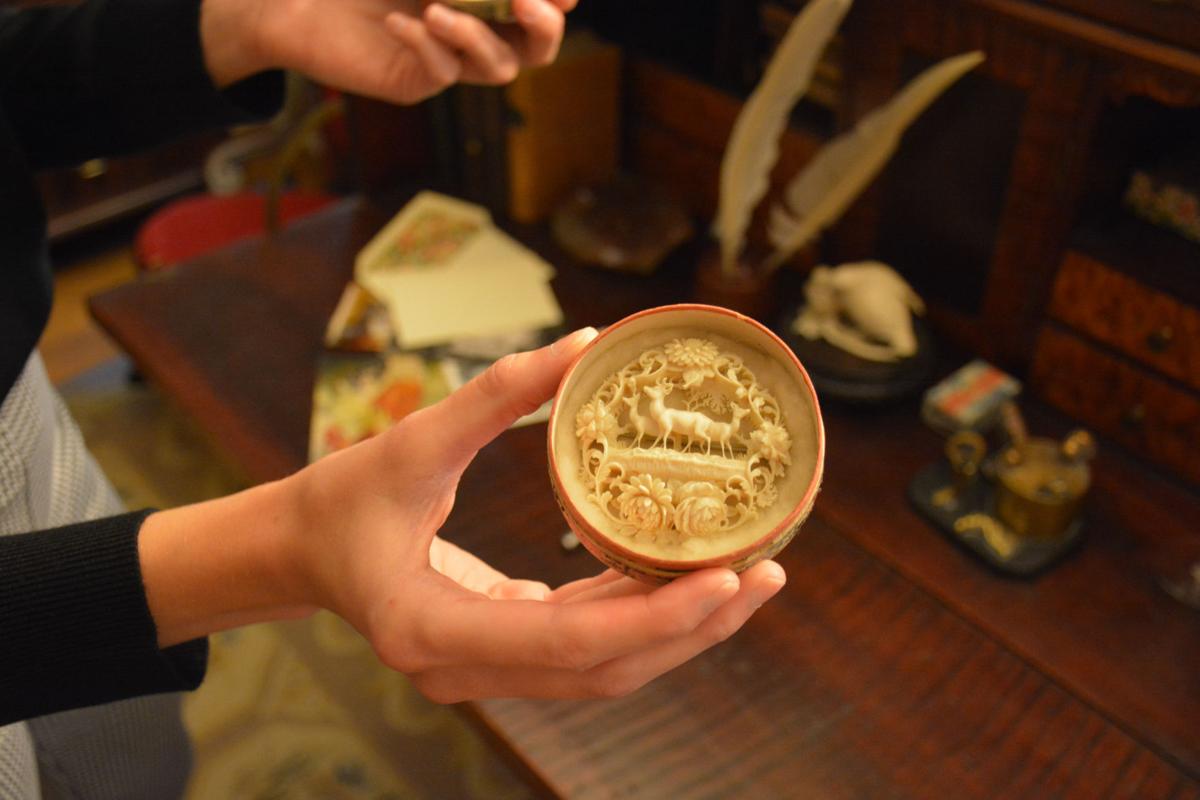 This ivory brooch is Sofia Thornblad’s favorite item in the Horatio Colony House Museum in downtown Keene, where she serves as executive director. 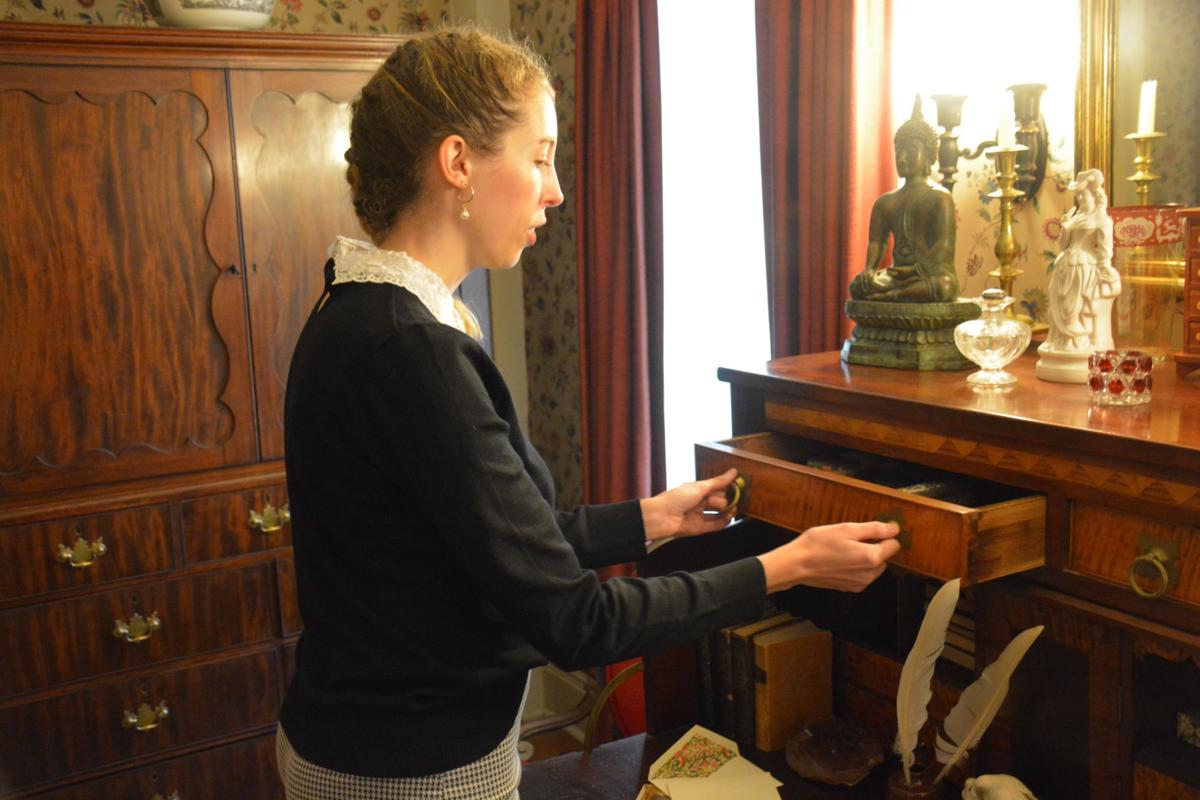 "I’ve always loved history," said Sofia Thornblad, in the Horatio Colony House Museum in downtown Keene, on Tuesday. "And being able to see as much of that history firsthand and learn from it is, I think, a really valuable experience.

Sofia Thornblad plays Game of Graces with Athena Mooney, 9, of Keene (not pictured) during the Old-Time Children’s Games in the Garden event at the Horatio Colony House Museum in August.

This ivory brooch is Sofia Thornblad’s favorite item in the Horatio Colony House Museum in downtown Keene, where she serves as executive director.

"I’ve always loved history," said Sofia Thornblad, in the Horatio Colony House Museum in downtown Keene, on Tuesday. "And being able to see as much of that history firsthand and learn from it is, I think, a really valuable experience.

Sofia Thornblad was 13 when she first set foot in the Horatio Colony House Museum in downtown Keene for a friend’s birthday party.

“So that was my first experience here, and I remember walking through the rooms and thinking how cool it would be to live here,” Thornblad, 27, said.

Now, she does live in the house at 199 Main St., where she works as executive director of the museum. As part of the role — which she started last December, following the retirement of longtime director Anita Carroll-Weldon — Thornblad also oversees the 645-acre Horatio Colony Nature Preserve on Daniels Hill Road.

And in the nine months since beginning the new role, the awe of living in the director’s apartment on the second floor of the historic home hasn’t worn off yet, Thornblad said.

“The apartment itself is really quite beautiful, and the fact that I step through my apartment door and go back in time is still cool,” she said.

The house was built in 1806 and became a museum in 1977 upon the death of Horatio Colony II, whose grandfather Horatio Colony I was the first mayor of Keene. The Colony family also co-founded the Faulkner and Colony Woolen Mill, a site now home to an apartment complex on West Street.

Thornblad, who was born in Bennington and moved to Keene when she was 16, said her interest in this sort of history started at an early age.

“I’ve always loved history,” she said. “And being able to see as much of that history firsthand and learn from it is, I think, a really valuable experience. History helps us understand how we’ve gotten where we are today.”

She attended ConVal Regional High School in Peterborough for two years, before moving to Keene and graduating from Keene High School in 2013. Thornblad stayed close to home for college, attending Keene State, where she majored in Holocaust and genocide studies and minored in German.

“I started to take some art history classes, which really captivated my interest,” she said. “But then more importantly I would say, I had always had a pretty deep curiosity about the Holocaust and human suffering generally speaking, and why that happens and how the world can allow for such things. So I started to take classes in the Holocaust and genocide studies program and very quickly found that it felt like that was what I was supposed to be doing.”

In her final semester of college, she studied abroad at Jagiellonian University in Krakow, Poland, where she also became interested in museum work while interning at the Galicia Jewish Museum. After earning her bachelor’s degree, she worked for a year at Hannaford in Keene before beginning a master’s degree program in museum studies at the University of New Hampshire in Durham.

“The whole idea behind getting a master’s degree in museum studies was to broaden my horizons beyond just Holocaust and genocide studies, because my interest in museum work had more to do with, basically, any and all museums, and history in general,” Thornblad said.

The year-and-a-half-long master’s program focused heavily on internships. For Thornblad, that included a three-month stint at the Horatio Colony House Museum in the summer of 2019, when she guided tours of the property and assisted Carroll-Weldon with research for upcoming exhibits.

“Working with Anita was awesome,” Thornblad said. “That’s one of the advantages of having this museum basically be a one-woman show — I got to essentially learn the job, in terms of the front-facing parts of it. It was very helpful. And then when she retired, this had already been in the back of my mind as a place that I would like to work.”

Thornblad’s internship also introduced her to Paul Bocko, a professor of education at Antioch University New England in Keene, and the project manager of the Horatio Colony Nature Preserve. (The Colony Memorial Trust, a nonprofit governed by trustees and an advisory board, has contracted with Antioch since the 1980s to manage the nature preserve.)

“For such a young person, she just had so much together and was so passionate about her other interests in history and Holocaust studies,” Bocko said of his experience with Thornblad during her internship. “... It’s great to have her come around and apply for the executive director job, and get it.”

Thornblad and Bocko work closely together to maintain the land on the nature preserve, which includes 5 miles of public hiking trails, and develop public programs and educational opportunities for local schools. Since Thornblad took over in December, Bocko said she has embraced every aspect of the role.

“She has such an energy to learn, and to learn about Horatio Colony II. It’s all relatively new to her, but she’s really dived into the journals and all the materials. So it’s wonderful to see, and learn with her,” he said. “... She’s an asset to the community. She really is, and it’s just a great example of an excellent program, an excellent aspect of our community that she’s carrying on.”

Looking ahead, Thornblad — who lives with her two cats, Cosmo and Figaro, and gets regular visits from her boyfriend Graham Bradler of Temple — said she envisions a bright future for the museum.

“This museum has so much potential,” she said. “I want to continue to connect even more with the Keene community. There’s more and more history that can be brought to light in terms of the museum, collections, the Colony family, you name it.”

Specifically, she said she wants to establish a more consistent internship program with Keene State College, and expand the appeal of the museum to younger people. Already, during the COVID-19 pandemic, this effort has included hosting online events and bolstering the museum’s social media presence, even adding Instagram and TikTok accounts.

“TikTok has been really fun,” she said, with a laugh. “It’s small. We haven’t, like, gone viral or anything, but it’s been a really cool way to connect with people basically all over the world.”

The pandemic has limited the programming Thornblad has been able to conduct this year, but she said the outdoor space — both on the grounds of the house and at the nature preserve — has been a blessing. Tours of the house resumed in July, she said, and will continue, by appointment, through Oct. 15. Over the winter, Thornblad said she will set the budget for the coming year, plan maintenance projects and conduct research for next year’s exhibits.

“Something that’s so cool about this job is you get to do a little bit of everything,” she said. “You get to do the tours, you get to do the budget planning, the research, learn how to take care of an old home. There’s so much just in that, and the day-to-day is never the same.”

At a glance: Sofia Thornblad