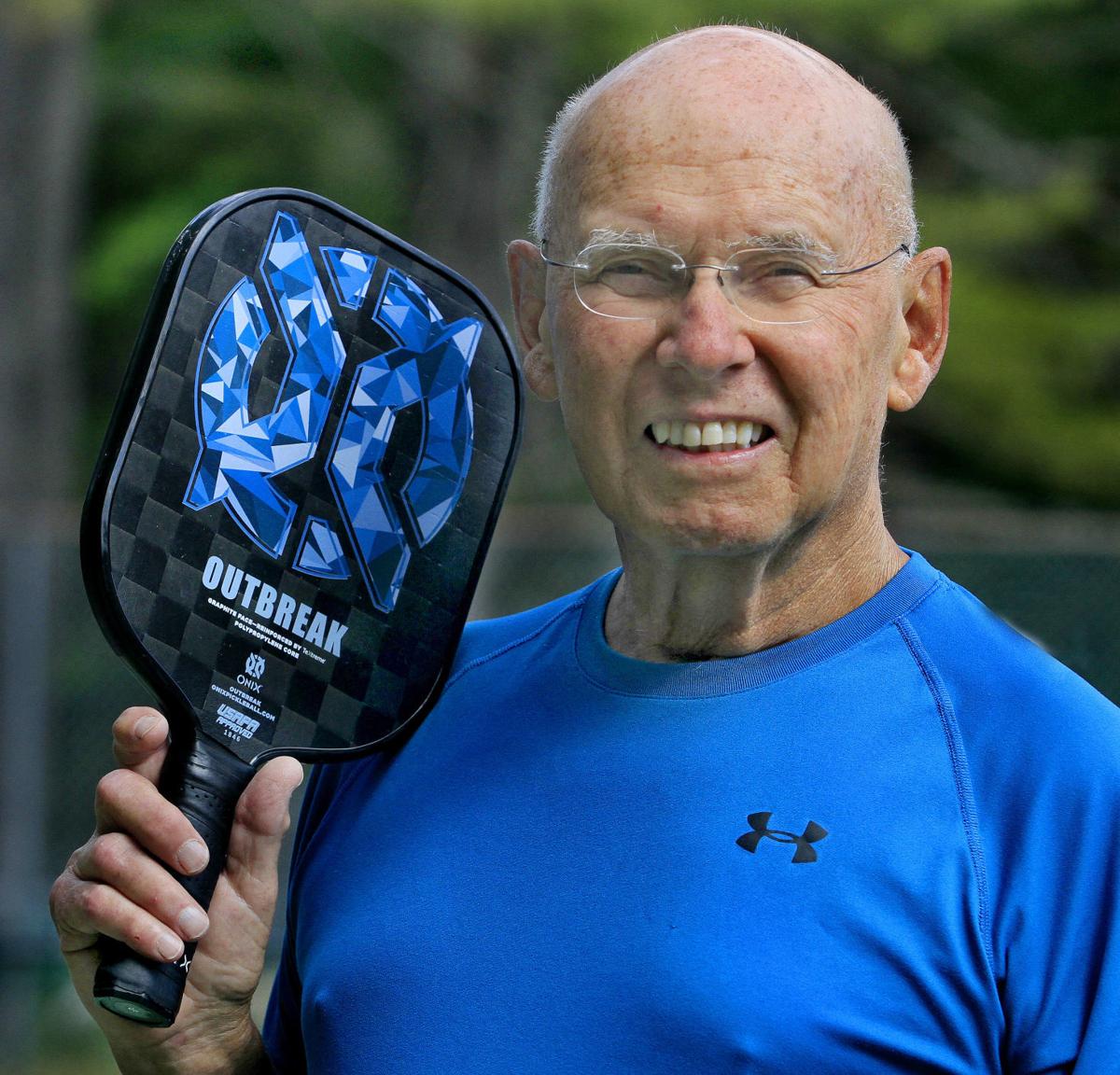 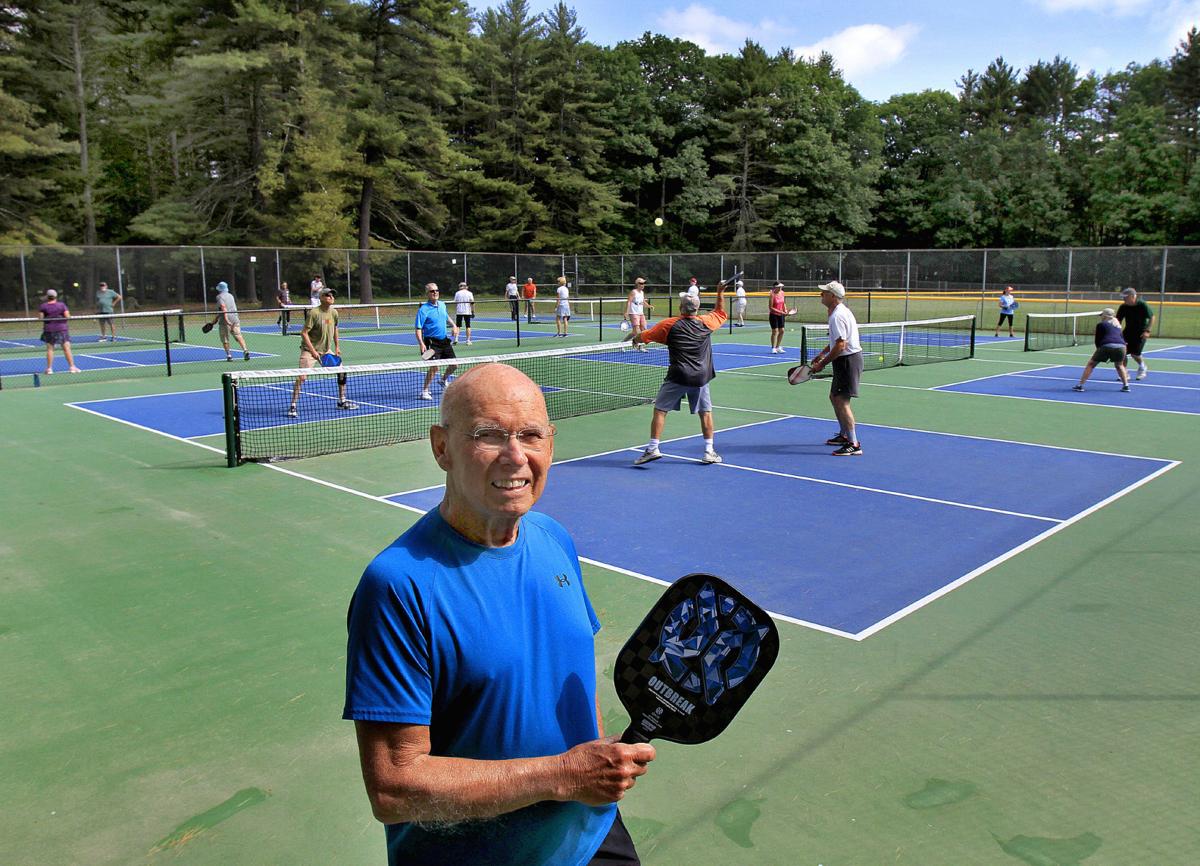 Ron Farina, at the fully occupied pickleball courts behind Jonathan Daniels School in Keene Wednesday morning, says he’s an ambassador for the sport.

Ron Farina, at the fully occupied pickleball courts behind Jonathan Daniels School in Keene Wednesday morning, says he’s an ambassador for the sport.

It is a gorgeous summer day, not a single cloud in the sky, and Ron Farina sits at the kitchen table at his West Keene residence of 44 years, looking out a rear window at what might be one of the best views of Mount Monadnock in the city.

The man is 81 years old but could easily pass for 70 or perhaps even younger, his relaxed manner and engaging smile conveying a sense of bonhomie — a cheerfulness and good humor about life. Some people are blessed with that disposition.

“I love this city,” he says, gazing out at the mountain. “I wouldn’t want to live anywhere else.”

The story of Farina’s life so far is one that in ways reflects the history of Keene, as he has been so connected to people past and present who’ve made the city what it is. His experience is a bridge that spans what Keene used to be and what it is today — a present that he played a part in shaping.

Farina’s story began March 18, 1938, at Elliot Community Hospital on Main Street, the city’s former hospital before a new one was opened at 590 Court St. in 1973.

His parents were Mario and Lena Farina, who themselves played a role in Keene’s history. Mario and his three brothers, Gino, Leonard and Dick, owned and operated Princess Shoe in Keene, a significant industry in the city at the time. Their father, Luigi — Ron’s grandfather — had brought the thriving company to Keene from Lynn, Mass., in 1934. Factories were unionizing in the Boston area, something he wanted to avoid, and he’d found the Keene area had an ample supply of “stitchers” — workers who knew how to make shoes.

The company was initially in the second story of what is now Carriage House condominiums on Church and Wells Street downtown, the first floor at that time home to an automobile dealership. The company later moved to a building that was originally home to Beaver Mills on Railroad Street, just past Community Way, which now houses a variety of businesses and organizations. Farina owns the building.

He discovered only recently why the company was named “Princess.” His grandparents had four daughters in addition to Ron’s four uncles. One of them — Yolanda — had died young. “My grandfather was devastated by her death,” Farina explains. “At the time, the king of Italy had a daughter who was named Yolanda, and she was a princess, therefore the name.”

He describes the Keene of his youth as a near-idyllic place for kids.

“It was wonderful,” he says. “I can remember them closing off Beaver Street so we could sled down to Beaver Street Market. It was a time of being with neighborhood buddies. We walked everywhere, and there were pick-up baseball games. We’d go to the old Boy’s Club at St. James Church, and we’d do such things as when a new car model would come out, we’d race down to the dealership and grab the catalogs to check it out.”

After graduating from Keene High School in 1956, in the final class before the school moved to Arch Street, Farina enrolled at the University of New Hampshire and later graduated with a degree in business. Two weeks after graduation, he married Cynthia Nicholls, a girlfriend he had met at the old Ice Creamery on Park Avenue.

He began working at the family company. “They put me through a lot of jobs there, and I learned the shoe business,” he says.

“It was all family,” he notes of the firm’s makeup, “and after a while, I wanted to do something on my own.”

At a Lions Club meeting he attended, an executive with a drug company spoke about that industry. “It sounded fascinating,” he recalls, and he peppered the man with questions about pharmaceuticals. “I didn’t know an aspirin from a tranquilizer,” he says.

He went to the two drugstores in Keene at the time, Bullard & Shedd and Medical Hall, and got a list of all the pharmaceutical companies in the United States. “I wrote to all of them asking for a job interview.”

He ended up securing a position as a sales representative with Wyeth Pharmaceuticals.

“I remember that a man by the name of Ogden Owens, a district manager of Wyeth, interviewed me in Keene while he was on a sales trip. He asked me what I knew about pharmaceuticals, and I answered, ‘Nothing.’ But I told him that I’m a fast learner.”

He was hired on the spot and given the option of moving to either Pittsfield, Mass., or Burlington, Vt.

With two children in tow, he and his wife headed to Burlington, where a third child was born. After three years, Farina took a job with another pharmaceuticals company, Hoffmann-La Roche, assigned to an office in Concord, N.H.

“My territory was the northern part of New Hampshire, and I recall meeting with all these older country doctors,” he says. “I loved that job.”

Unfortunately, bad news was ahead, as his wife died in 1970, leaving him a 32-year-old widower with three young children.

He moved back to Keene, and by this time, the shoe company had been sold. His father had purchased a store called The Melody Shop on Main Street and asked Ron to manage it. “That store was the largest home-entertainment center around. We sold records, musical instruments, organs, everything.”

In 1972, he was introduced to Jocelyn Fairbanks, and the two married, moving into the West Keene house where he lives now, which he’d bought from one of his uncles. With his three children and his wife’s two, the merged family made for a lively household, he says. They built a swimming pool in the backyard that became a magnet for kids in the neighborhood.

That same year, his father suffered a stroke, and Farina took over his business affairs, including The Melody Shop, and bought out his uncles’ shares in the Railroad Street building that had housed the shoe company.

In addition to running The Melody Shop, Farina also started the Fitness Factory workout facility on the third floor of the former shoe company.

By 1994, Farina says he saw the writing on the wall for independent retail stores such as The Melody Shop, and shuttered it. “I saw that the big-box stores and catalogs were coming, and I couldn’t compete with them, so I just closed the doors.” The Fitness Factory eventually closed, as well.

He then became a real estate agent and joined Prudential Brown & Tent, which is now closed. He joined what’s now called Better Homes and Gardens/The Masiello Group real estate in 2000, where he continues to be associated.

His second wife died in 2016, after suffering from Alzheimer’s. “It was the most difficult time of my life,” he says. “With Alzheimer’s, you’ve lost them as a person.”

A president and ambassador

The story of Farina’s business ventures is simply one facet of the man. Perhaps the more significant part is his deep involvement in the community.

“No matter what it is, Ron’s there for you. He has an uncanny ability to get things done,” says Deb Hogancamp, a longtime friend and fellow member of the Keene Lions Club, where Farina has been a member since 1970.

During his time with the Lions, Farina has served as president three times and produced several of the club’s annual musicals, one of the most popular yearly events in the city.

“Ron’s a very giving man,” Hogancamp says. “I think much of that comes from his dad, who left a great deal of love and fellowship in his footsteps.”

Farina is also responsible for the explosion in popularity of pickleball in Keene, a paddle sport he says is now played by more than 300 residents in the city. In fact, he spearheaded a Lions Club initiative to build pickleball courts on the former tennis courts behind Jonathan Daniels School on Maple Avenue.

“Pickleball is an important part of my life. I love it, and I’m an ambassador for the game. It’s fun, it’s exercise, and it’s camaraderie.”

The kinship with people the game fosters dovetails with Farina’s overall philosophy of life.

“I love people. Treat people right, and be honest with them. Listen to people, don’t talk to them; you’ll learn things. You treat people the way you want to be treated. The Golden Rule.”

He references a very popular book published in 1989, “The 7 Habits of Highly Effective People,” by Stephen Covey.

“One of the ‘habits’ is about character,” he says. “You can’t say that you have character; you build character over time.”

At a glance: Ron Farina