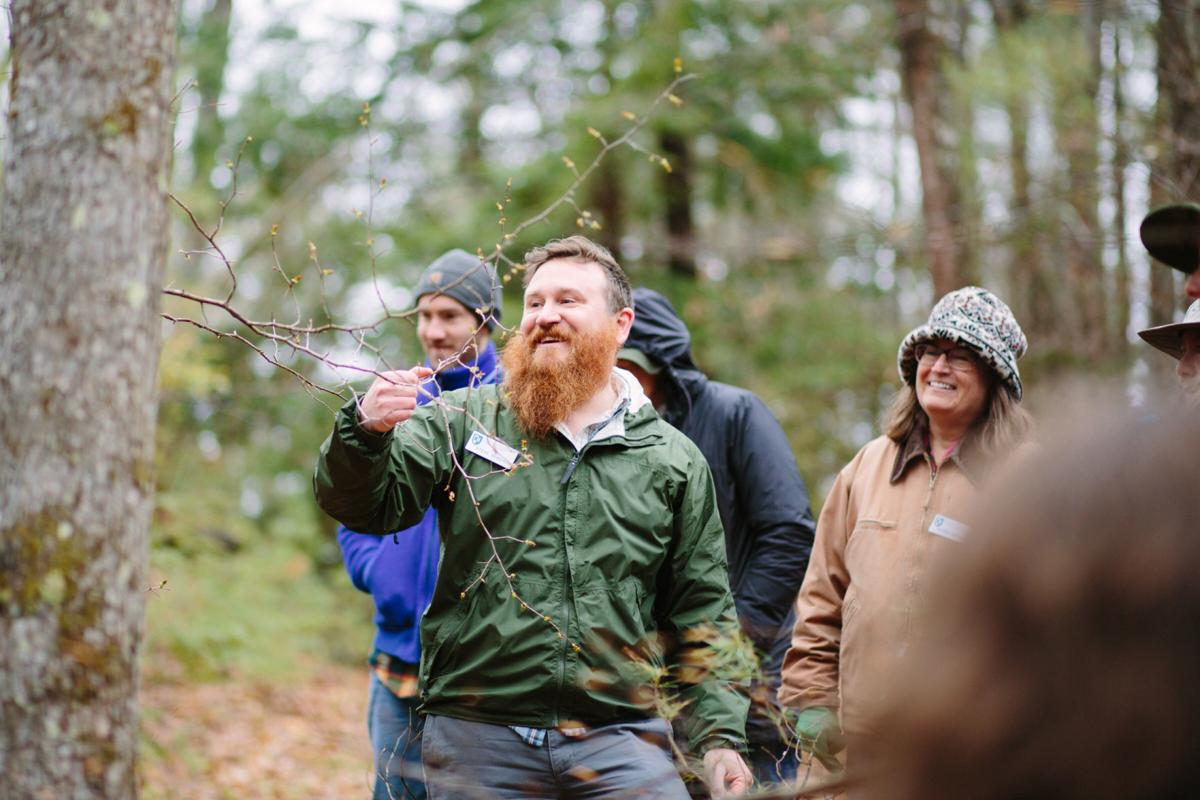 Steven Roberge of Peterborough, the Cheshire County forester with the University of New Hampshire Cooperative Extension, speaks at a volunteer training in Greenfield in May 2017. 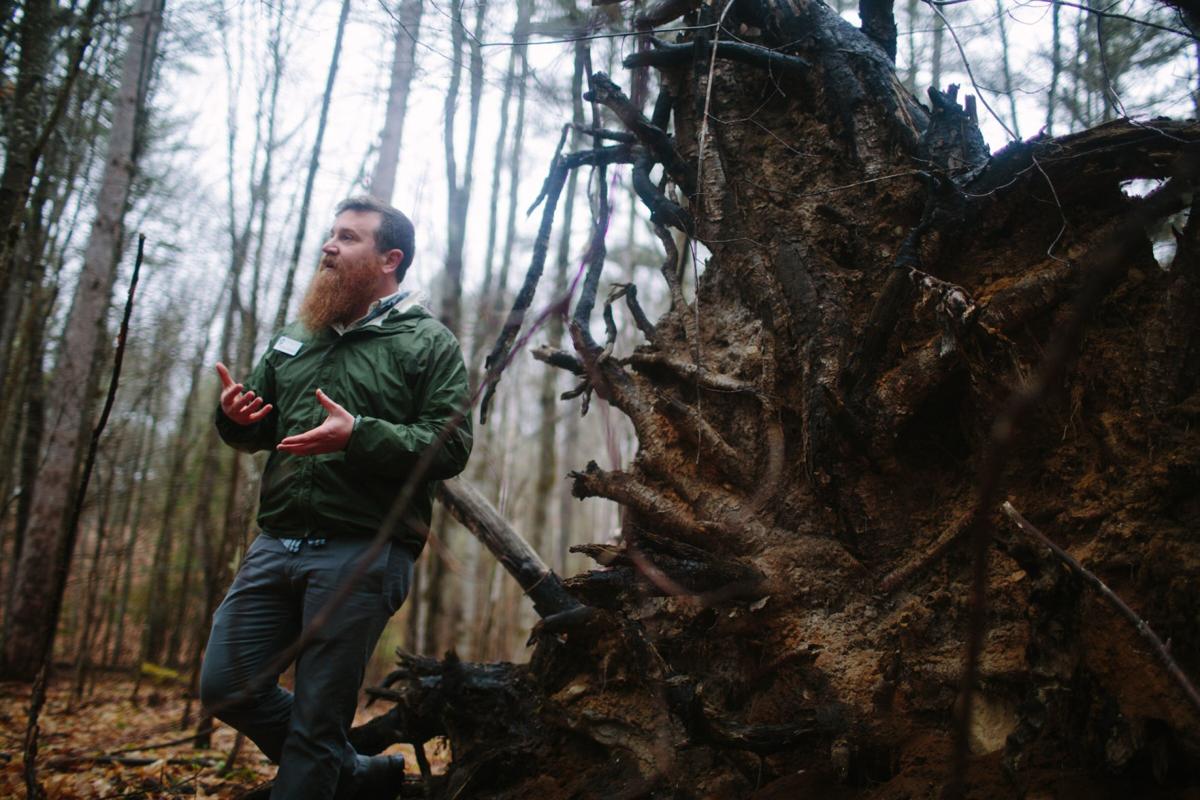 Steven Roberge, the Cheshire County forester with the University of New Hampshire Cooperative Extension, at a volunteer training in Greenfield in May 2017. 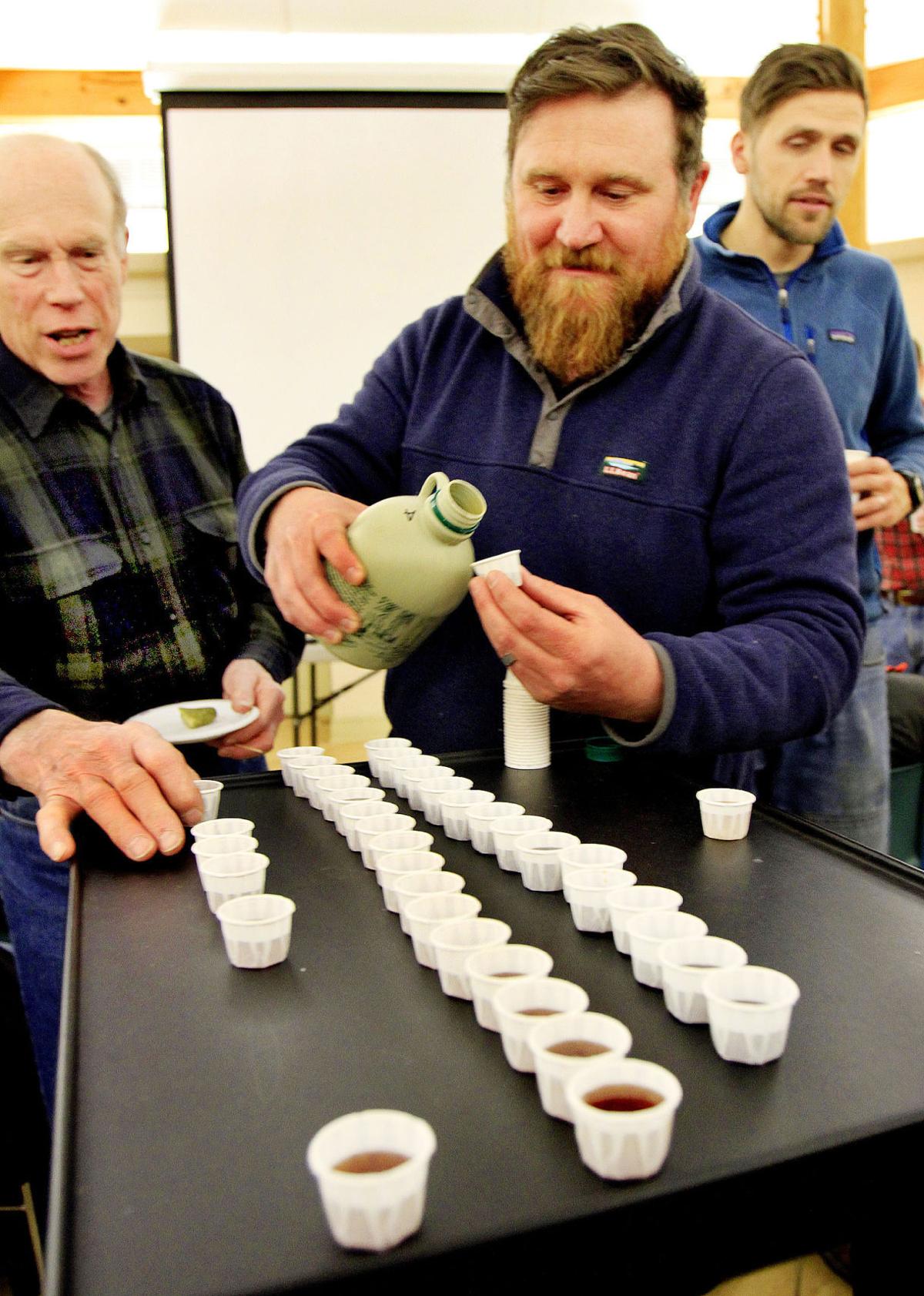 Steven Roberge pours samples during a maple syrup tasting event in March at the Harris Center for Conservation Education in Hancock. In addition to being Cheshire County forester with the University of New Hampshire Cooperative Extension, he's also the cooperative extension's resident maple specialist.

Steven Roberge of Peterborough, the Cheshire County forester with the University of New Hampshire Cooperative Extension, speaks at a volunteer training in Greenfield in May 2017.

Steven Roberge, the Cheshire County forester with the University of New Hampshire Cooperative Extension, at a volunteer training in Greenfield in May 2017.

Steven Roberge pours samples during a maple syrup tasting event in March at the Harris Center for Conservation Education in Hancock. In addition to being Cheshire County forester with the University of New Hampshire Cooperative Extension, he's also the cooperative extension's resident maple specialist.

When Steven Roberge walks in the woods, he’s no mere hiker. He’s a consultant, an educator, a historian in an archive.

“When you spend a bunch of time in the woods, you realize that our forestland has been altered for centuries,” he said. Stone walls and cellar holes turn up in remote, overgrown places. “You come across it, and you think you’re in the middle of nowhere,” he said. “But then you realize that the land that you’re on, the forestland that you’re in, was probably pasture in the 1800s.”

The 38-year-old Peterborough resident walks in the woods a lot. As the Cheshire County forester with the University of New Hampshire Cooperative Extension, he works with private landowners to help them learn about and manage their forests. He estimates he makes about 75 to 100 visits to woodlots per year, on average.

Every woodlot is unique, he said. He described a property in Troy with massive old oaks cradled by a southeast-facing ledge. The Hurricane of 1938, which blew down scores of other trees, couldn’t topple the oaks. “Because the ledge caught them, they were able to kind of survive that impact,” Roberge said. “And they’re still growing today.”

Elsewhere, he sees evidence of past human disturbances. “It’s not random why we have, you know, a bunch of white pine across the landscape,” he said. “It’s because we cleared the land for pasture and then abandoned it.”

As a forester, Roberge finds that history useful. “The history of our forest — knowing what happened both naturally and human-caused — dictates what our forest looks like today, and also dictates what it’s going to look like tomorrow,” he said.

But one gets the sense he’d be talking about stone walls and lucky oaks and abandoned sod regardless. Roberge seems to delight in all things wooded.

“I’m able to talk about trees on a daily basis with people,” he said of his job. “And I think that’s a win no matter what.”

A life in the woods

Roberge has felt connected to the woods his whole life. Growing up in Berlin, he would hike and go on Boy Scouts camping trips throughout the year with his father, a scoutmaster.

At the time, the local paper industry was still humming. “There was a whole economy based on working in the forest,” he said. “So I knew loggers, I knew foresters. … I knew you could make a living in the woods.”

Roberge studied forestry at the University of New Hampshire and then in a masters program at the Yale School of Forestry and Environmental Studies. He spent part of that time working in the Yale-owned forest lands, including the Yale-Toumey Forest in Keene and Swanzey.

He became the county forester in 2006. “Part of it was I was young and needed a job, and student loans had to be paid,” he said. The job suited him — traveling to different parts of the county and state, talking with landowners, educating them about their forests and helping them realize their goals.

“Probably the first half of it, I’m asking them questions,” he said. “You know: ‘How do you use the property?’ ‘In 25 years, what do you want this land to look like?’ ‘Do you have plans to gift it to your children?’ ”

Roberge said his role is to provide landowners with technical expertise, regardless of what they hope to do with the land.

“I’ve done everything from meet with landowners who want to do a ‘forever wild’ conservation easement on their property, all the way to very intensive forest management,” he said. “And we do everything in between.”

Swift Corwin, a Peterborough-based forester who often works with Roberge, said the county forester service is an important resource for landowners and other foresters.

“I think that Steve balances the science and the art of forestry really well,” Corwin said. On top of technical expertise, foresters have to think about people and society, Corwin said. “It’s the land and the people and the way the people use it and the multiple benefits of the forest. Basically, it’s all those facets. And the art is combining and understanding the balance of those facets.”

Roberge sees it similarly. “Most foresters, including myself, I think they like being alone in the woods. But rarely does that happen,” he said. “… You’re constantly dealing with personalities and other dynamics out there.”

Roberge is also the Cooperative Extension’s resident maple specialist. It’s useful expertise in this part of the world. He can talk about everything from the history of sugaring and the chemistry of sap to sugar-house design and the ways climate change could increase stress on sugar maple trees.

“I’ve traveled the whole state looking at sugar bushes and working with sugar makers, and also providing educational opportunities,” Roberge said. That includes workshops covering everything “from the very basic of how to tap a tree for someone who’s never done it before all the way up to some pretty advanced stuff in terms of setting up tubing systems and looking at sugar-house designs and all that.”

Roberge rents two sugar bushes and does some sugaring of his own every spring. “Most of the sap that I harvest from trees I just sell,” he said. “I do very little boiling, because I’d much rather be working in the woods.”

When not in the woods, he has a range of pursuits to stay busy. He chairs the Granite State Division of the Society of American Foresters, a professional association, and the N.H. Board of Foresters, which oversees licensing. He is involved with the Harris Center for Conservation Education in Hancock, the Southwest Region Planning Commission’s natural resources advisory committee and other organizations. He also has a passion for antique cars and claims to “make the best Sicilian pizza in the Monadnock Region.”

But he says he doesn’t grow tired of trees. It’s a good thing. Like his childhood camping trips, forestry gets him outside year-round.

“It can be 100 degrees out, or it could be 10 below. We’re still outside,” he said. “It’s all whether or not the landowner wants to do it. There’s some pretty hardy folk out there.”

At a glance: Steven Roberge